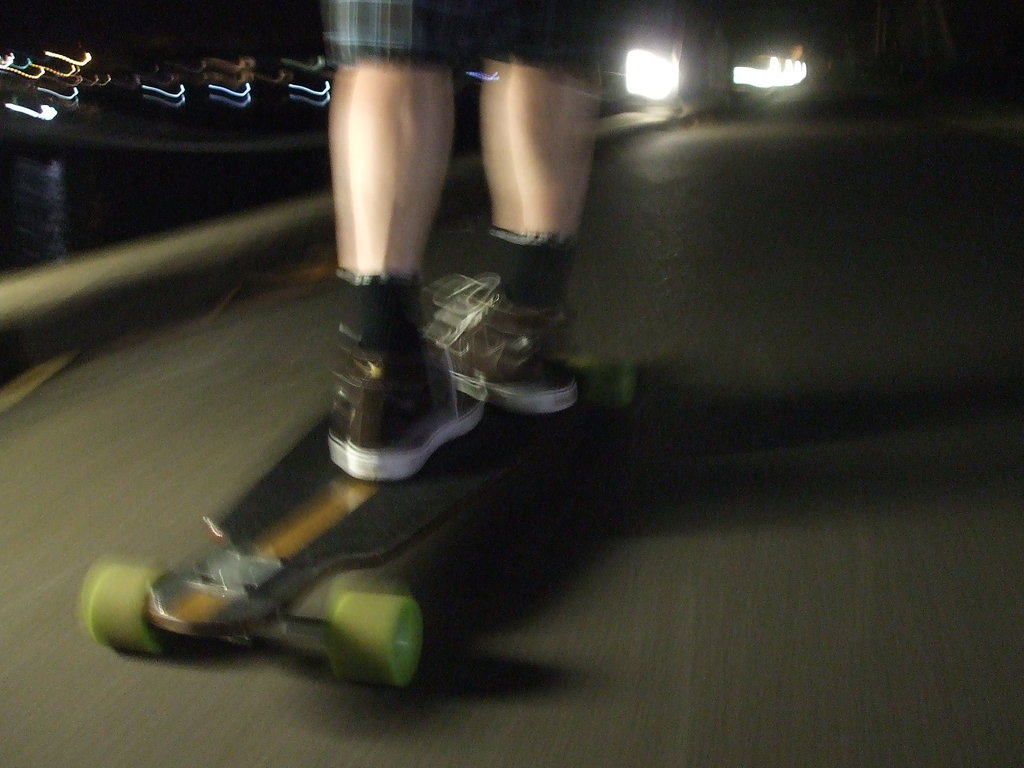 Early morning skating... I was out for a pre-dawn roll when I ran into a raving party animal on his way back from the backpacker-filled and rum-fuelled nightclubs. Never caught his name, but did catch a few ghostly images of him rolling through the Townsville darkness. 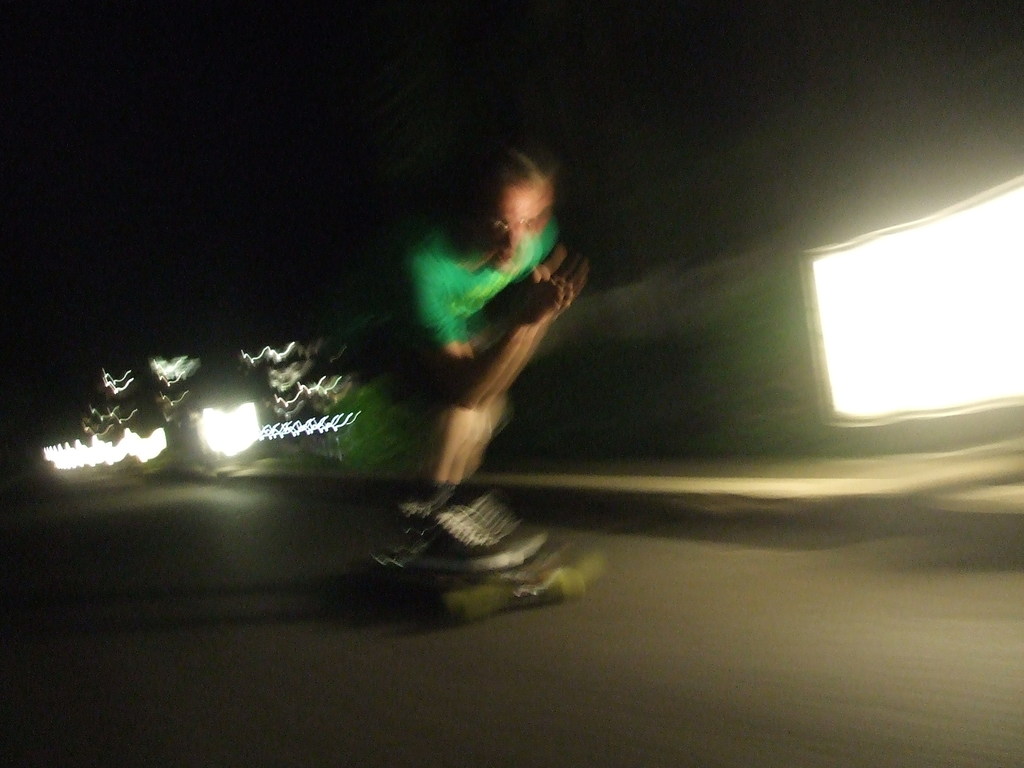 The Night Rider - coming to party at a hill near you...!


Why was everyone so worried about tech inspection? They'll pass anything up here in T-town. In fact, this place is totally lawless. We had a first-hand experience of this last night on the Strand. K-man and I went for a roll to enjoy the cool evening breezes, stopping by Cold Rock on the way back. For people living in caves, Cold Rock is an ice-cream place where you first pick your ice cream, then accessorise with delicacies such as chocolates, gummi bears, anchovies, fried grasshoppers, and rabbit droppings. It's really very lovely. Anyways, a fellow with dreads in front of us pulled out a brownie from his pocket, slipped it and a $20 dollar note across the counter to a young ice cream attendant with a tag indicating her name was "Amber". Amber discreetly took the money and the brownie and proceeded to squash it up into a big wad of triple chocolate dutch. Dreads looked happy as he walked off. K-man was excited by this little window into the T-town underground and asked Amber whether he could have the same. Amber replied "Where's your brownie?" But of course K-man didn't have one, at which point he sprinted out of the store and chased after Dreads. I haven't seen K-man since... 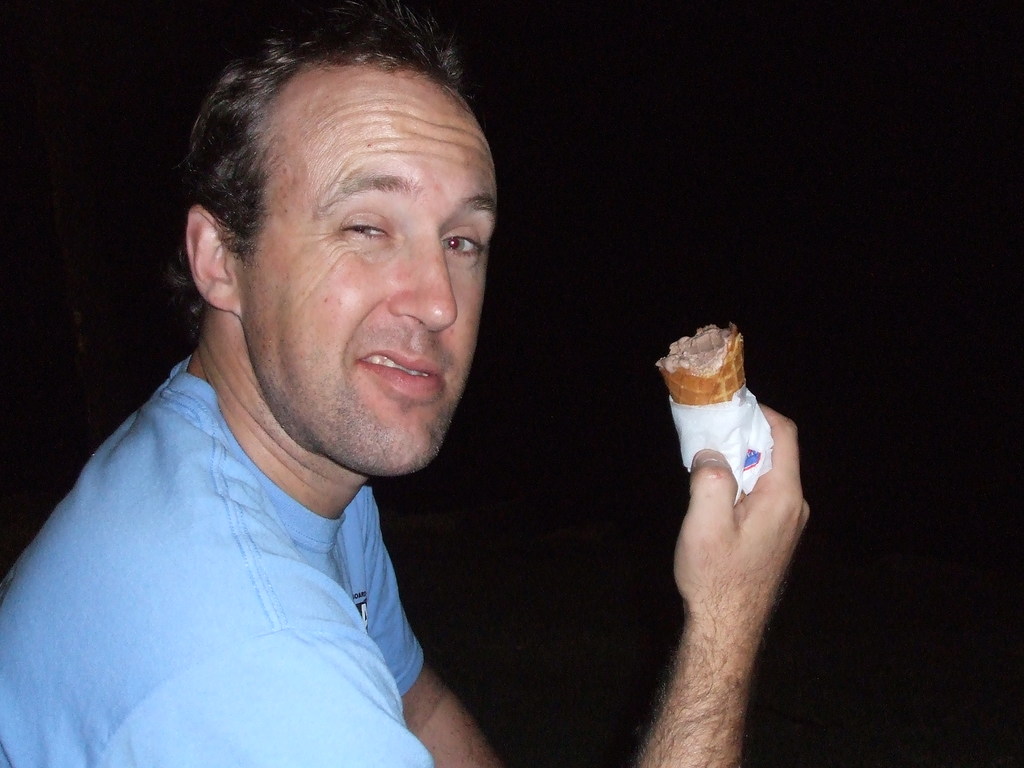 Robtech enjoying a tasty Cold Rock treat, wondering where in the world K-chap disappeared to...


So you're probably wondering - what's this all got to do with tech inspection? Check it out.


I was a bit nervous when showing up to tech spec because I've recently acquired some new and unorthodox downhill equipment. But Mr. Sakamoto immediately understood the innate value of my gear, and indeed praised my helmet for its traditional lines. As it turns out we are both fans of Masterchef. Anyways, Andy said "Haggy! Man, this gear you have is top-of-the-line stuff." "I know Andy, straight out of the Masterchef racing team design cupboard," I replied. By the way, does my thong pass inspection? Of course it does! No one in T-ville wears shoes. It's all thongs and g-strings up here. 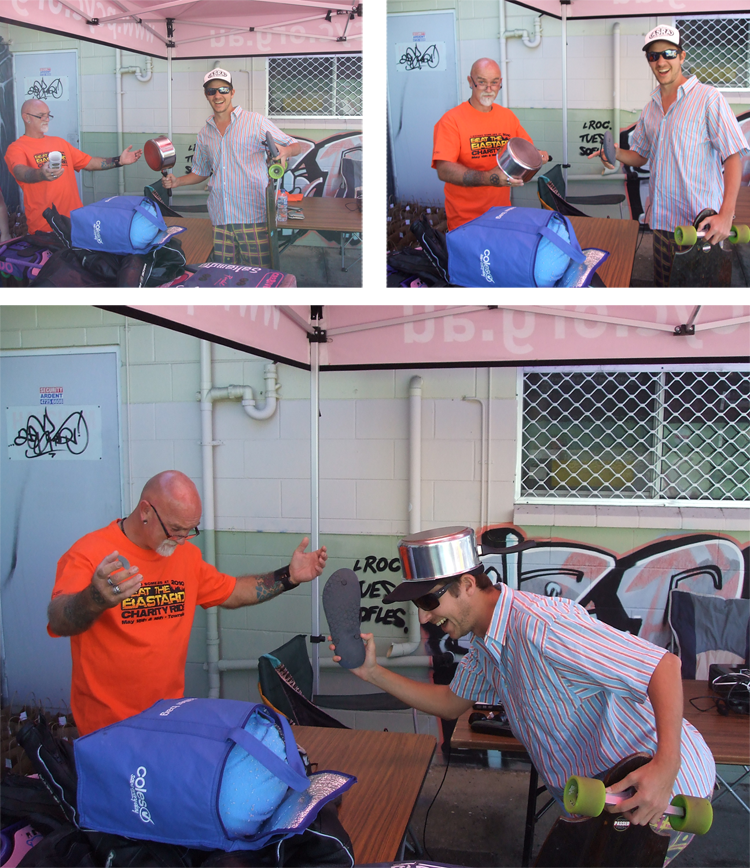 Now that is what I call a helmet!


The days are just flying by up here. We are having too much fun. Mamma mia! And we want to enjoy every minute so we are all employing Kanufi's attitude that if you tuck you will be faster: 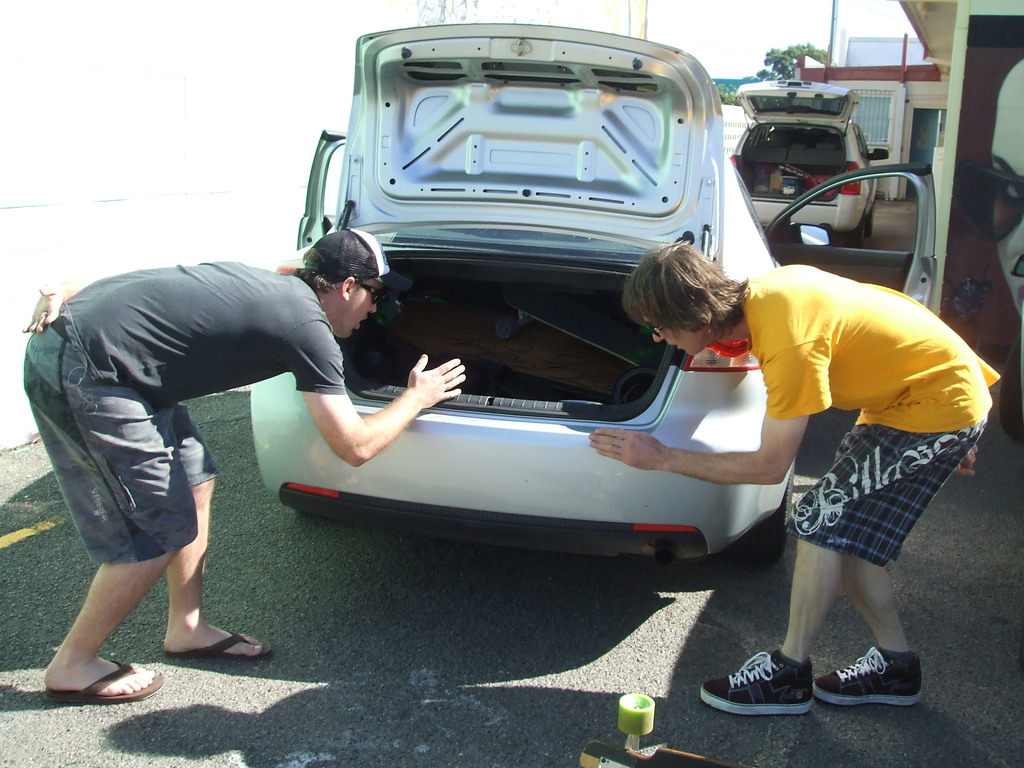 Getting crap out of the boot is faster when you tuck. Robtech and K-lad were hooking through the tech inspection line until they ran into Ado, who required certain favours for passing us through tech. Even the assistants are well-trained in the art of time-saving, tucking aggressively as Andy eyes his next victim. 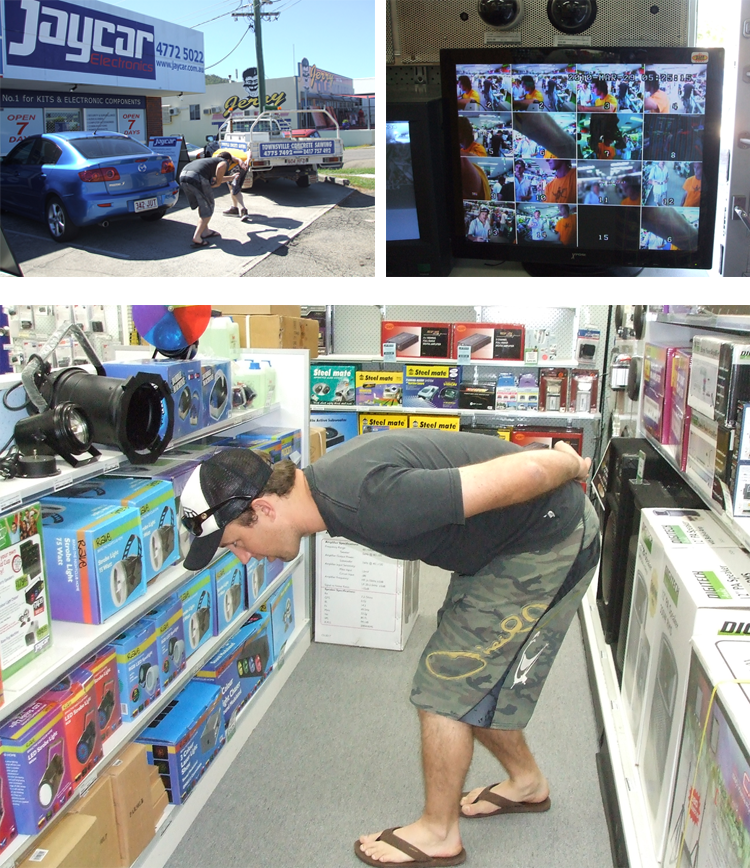 Tucking to Jaycar! This is shopping at Mach 3!

On another note, Pete (down)Hill and Ash D(ownhill) have been making some incredible boards in the past few years. Every few months they come out with some top-secret new model. The proof is in the pudding, these guys are out charging with the best in the world and doing it with style. I would love to get my hands on one of these, but apparently in order to qualify you actually have to skate, which I rarely do, finding it difficult to remove my attention from the ASRA site at all times, 24/7 kids. I think I will have to terminate my internet connection, although how would I google stuff then? How would I find out where the nearest bait shop is, or how many centimeters are in a foot, or how many sheep are in a flock? I mean, seriously, I think life would just stop without the internet. 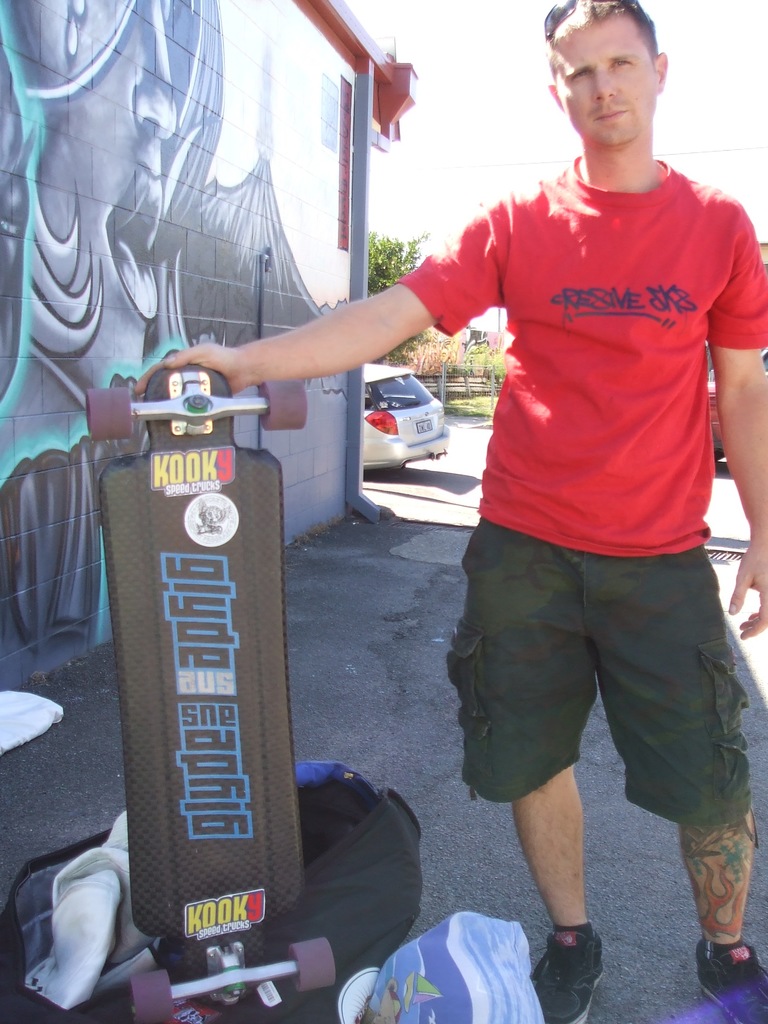 Pete doesn't muck around too much on the internet. He makes boards! Pete and his schmicko foamcore... Start drooling...


Going to the shops in Queensland is fun. The people who work in them often wear very colourful clothing to match their colourful personalities. This guy's name is Tiki Sammy. He has a pretty cool beard hey. I told him I know a guy with a beard so long it tickles his toes. Tiki Sammy thought for a moment, then replied. "Is it Ado?" "Oh my God" I exclaimed, "how did you know?!" Tiki Sammy explained that his role model is Ado and that he hopes that within a few years his beard will be as awesome as Ado's. I said "Good luck Tiki Sammy, I wish you all the best in your quest." We shook hands and I left, but not before buying a sodapop. 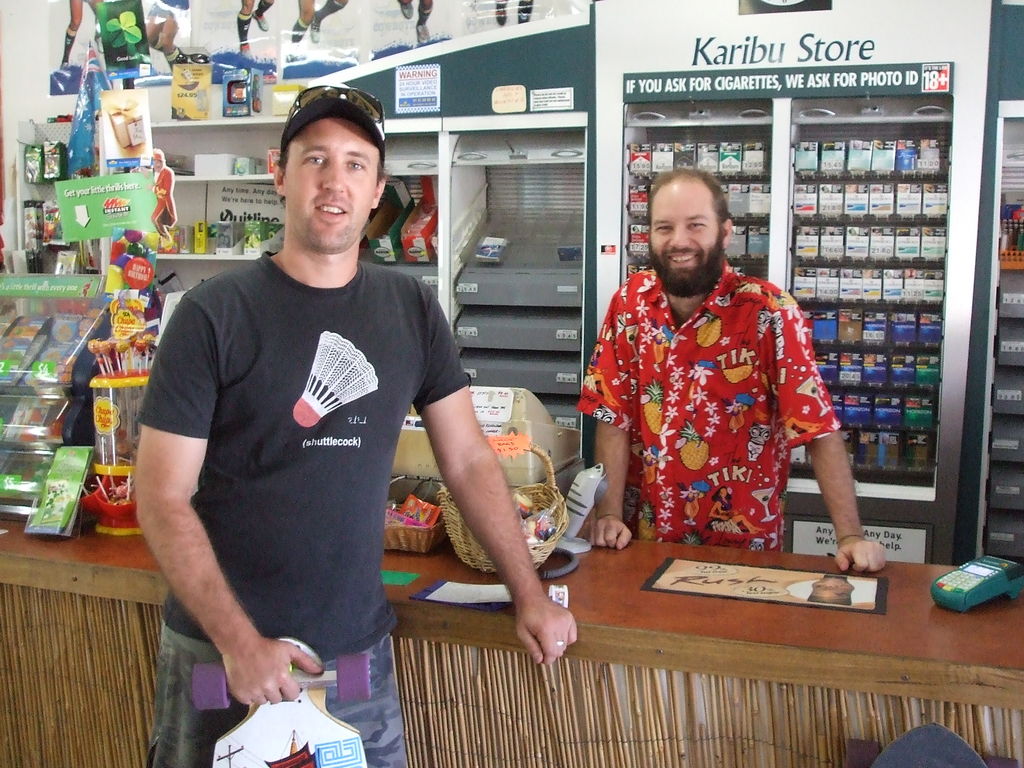 
Jeez Haggy, this can't be an ASRA blog without at least one or two skate photos. Okay okay, here ya go! 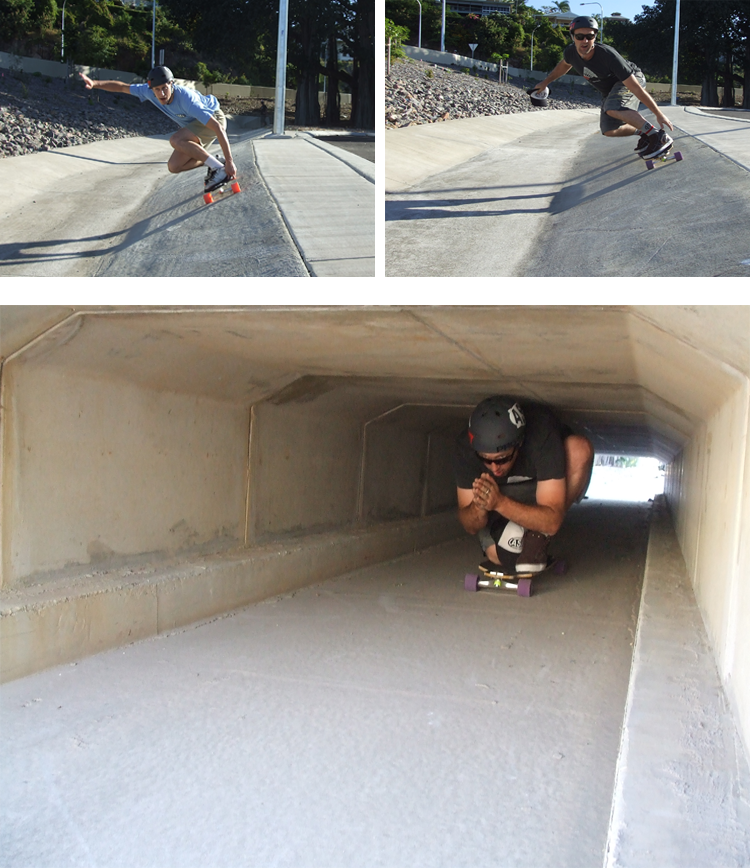 Robtech and Bugs carve up the ditch. And Robbro shows us just how low he can go...limbo limbo limbo!!


We then proceeded out to the hill for a quick look at what awaits us. Well, I was here last year so I kinda know what awaits, but holey moley, that hill is even steeper than I recall. In fact, I am pretty sure it has become even steeper. Now I'm no geologist, but I reckon all the rain they've had up here must have caused the mountain side to erode and slip off a bit to an even steeper incline. It's steeper than a church steeple! In other words, a great hill to learn how to footbrake on, because you simply have no choice. Of course the pros will point fingers and laugh at me for foot-braking, but that's allowed, especially when you're like and only get out for a skate every three months because I spend all my time on the ASRA site uploading photos of myself. At the bottom of the hill we ran into the one and only Grits. Clap your hands for this gentleman and a scholar. He was busy putting posts in the ground. It's part of his grand plans to attract aliens to Mt Stuart this weekend. It should work I think. If the rider's meeting is anything to go by the aliens have already arrived! 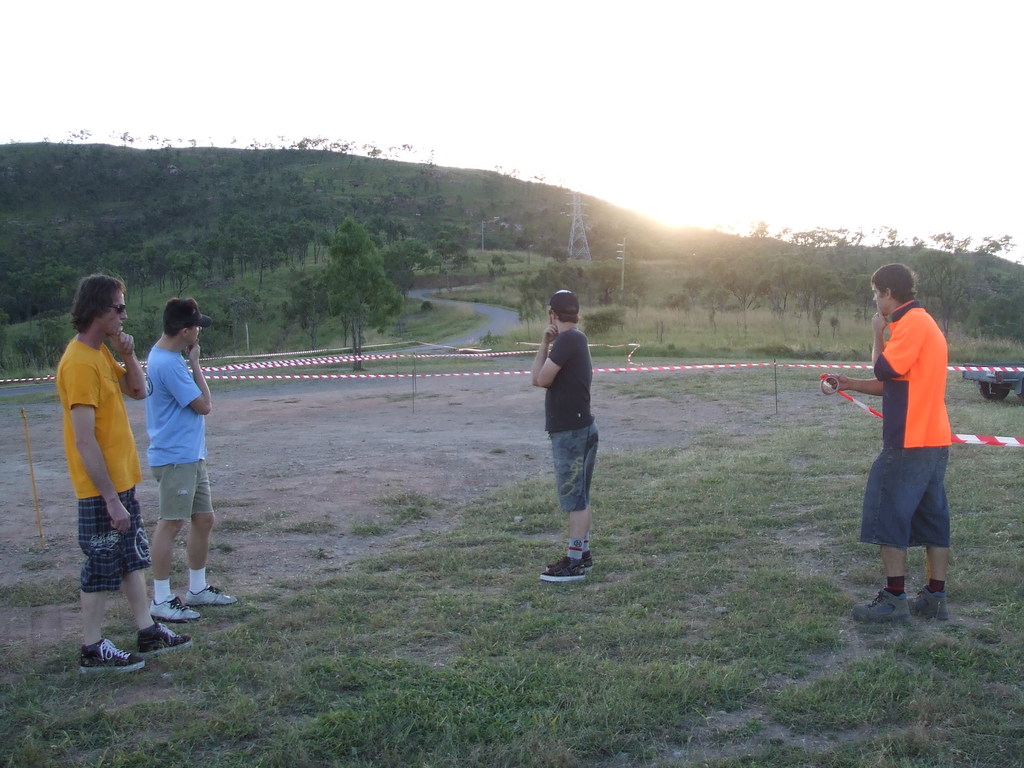 The crew in a moment of quiet contemplation (consternation?!) of the mighty mount.


Meanwhile, back at Cre8ive Sk8, people started collecting for the rider's meeting. Here are some photos of some usual and unusual suspects - enjoy! 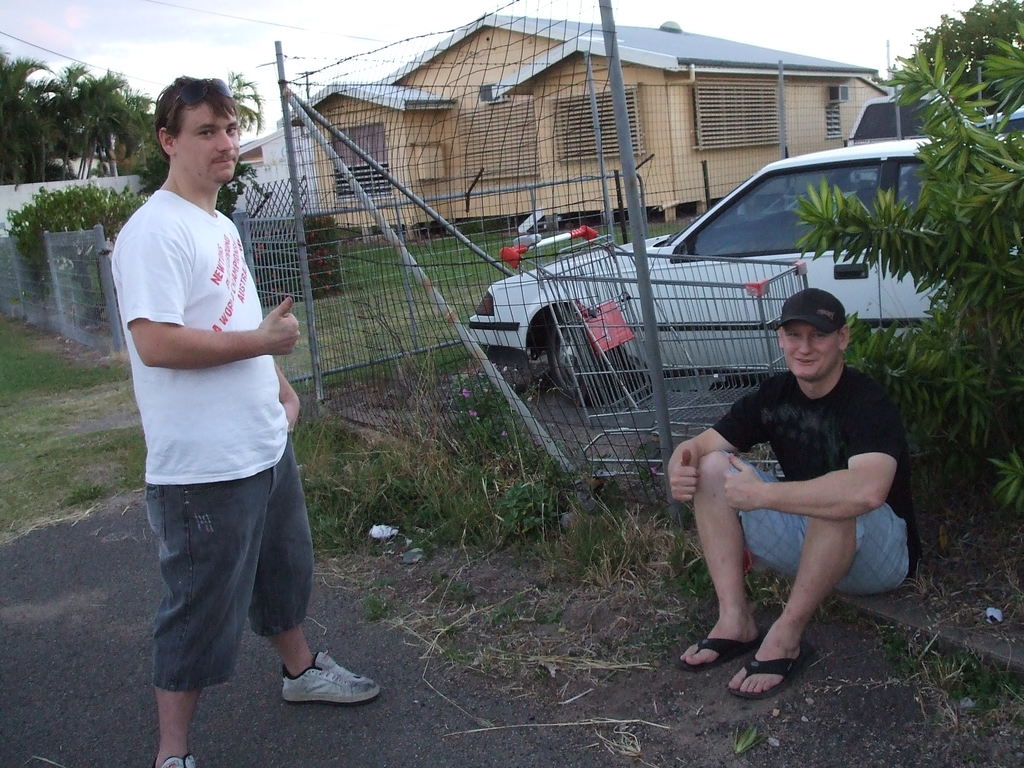 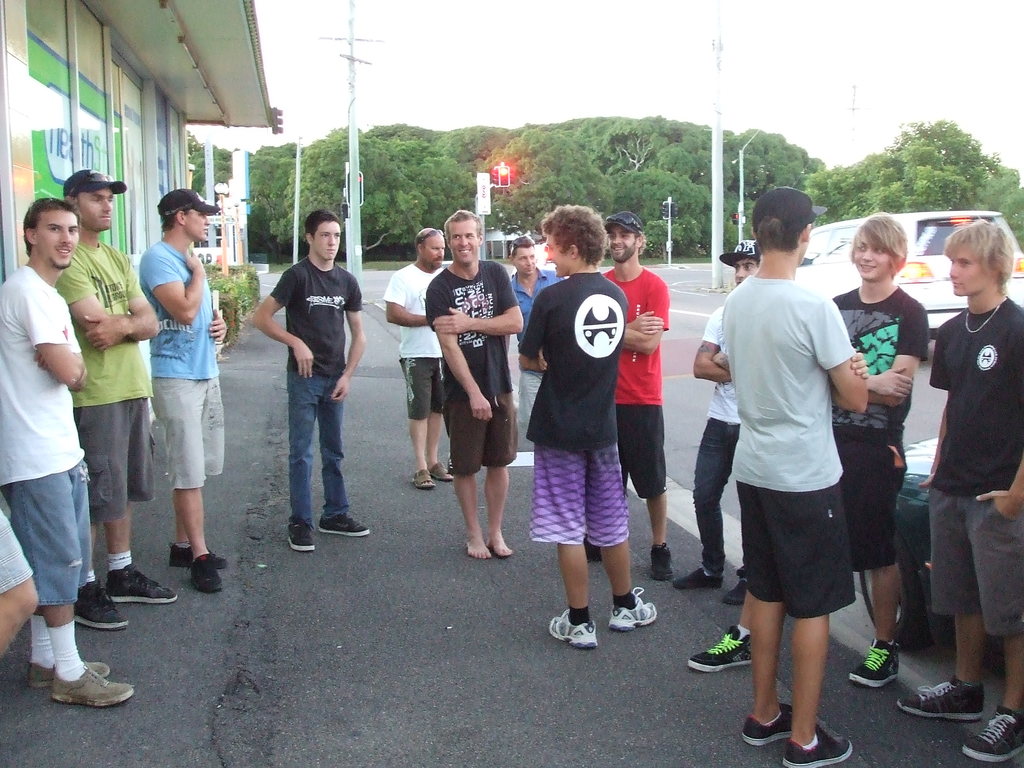 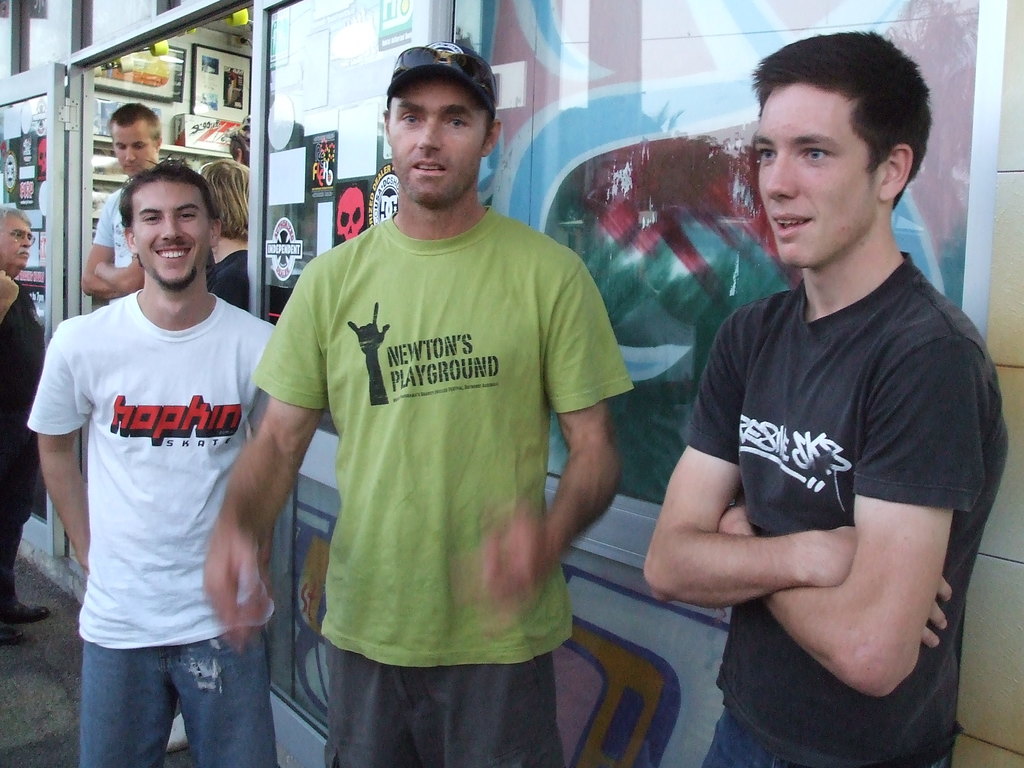 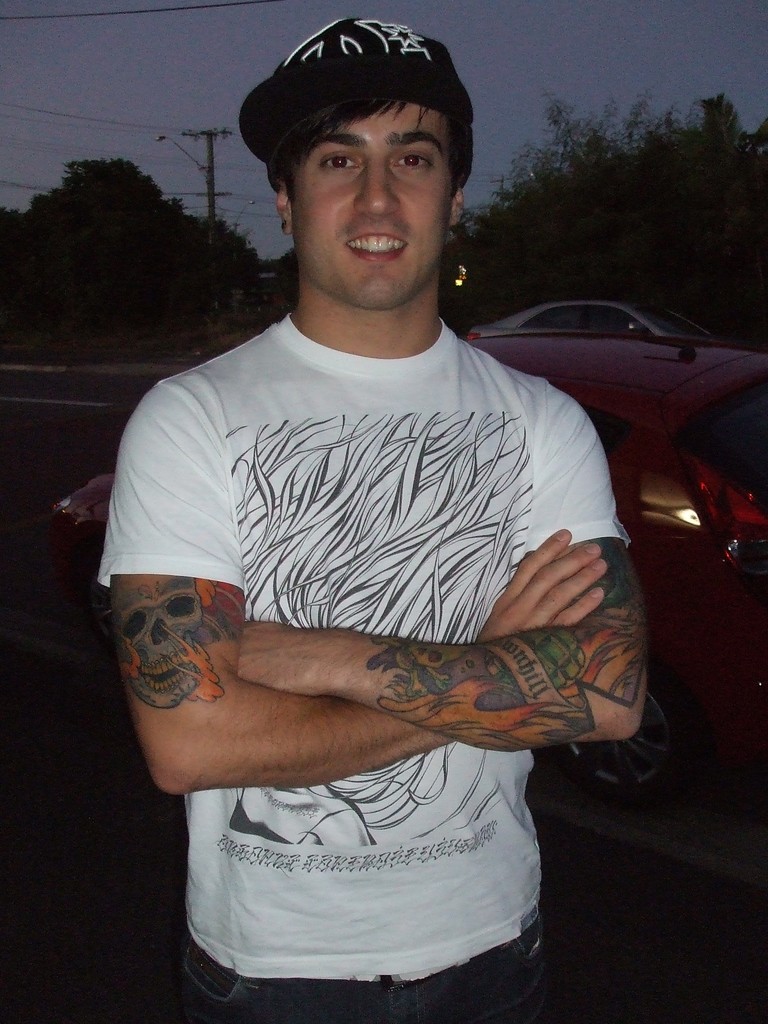 Holy crap! It's the big O! Mr. Olivier Bareaud to you kids. One of the fastest men on earth. 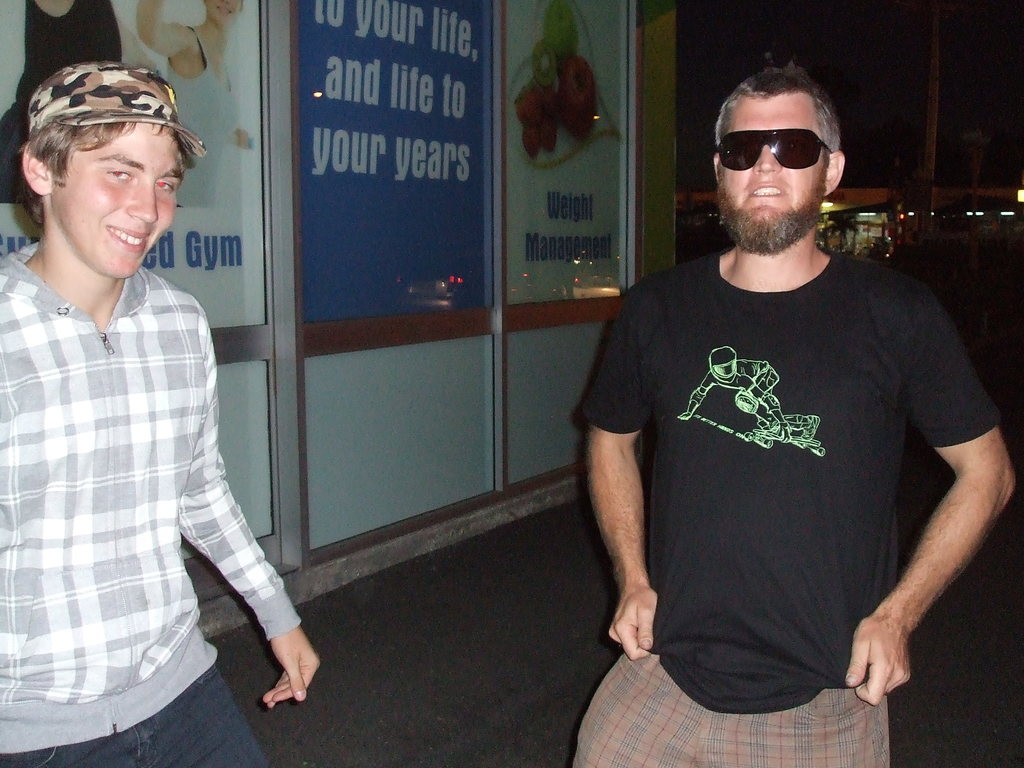 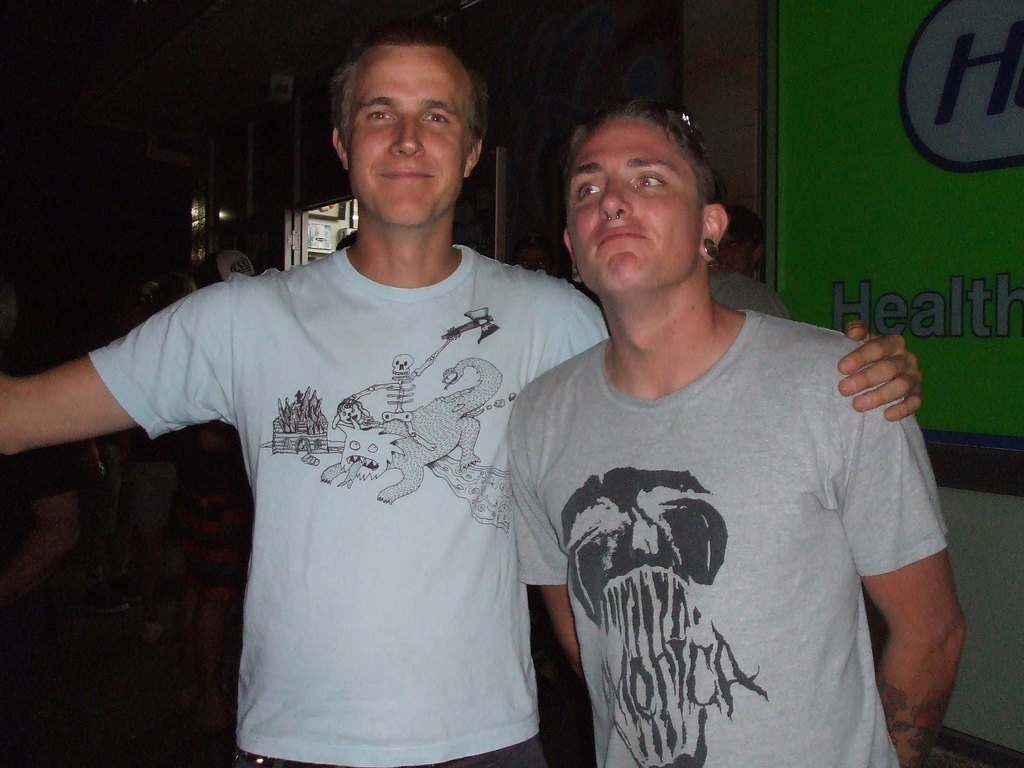 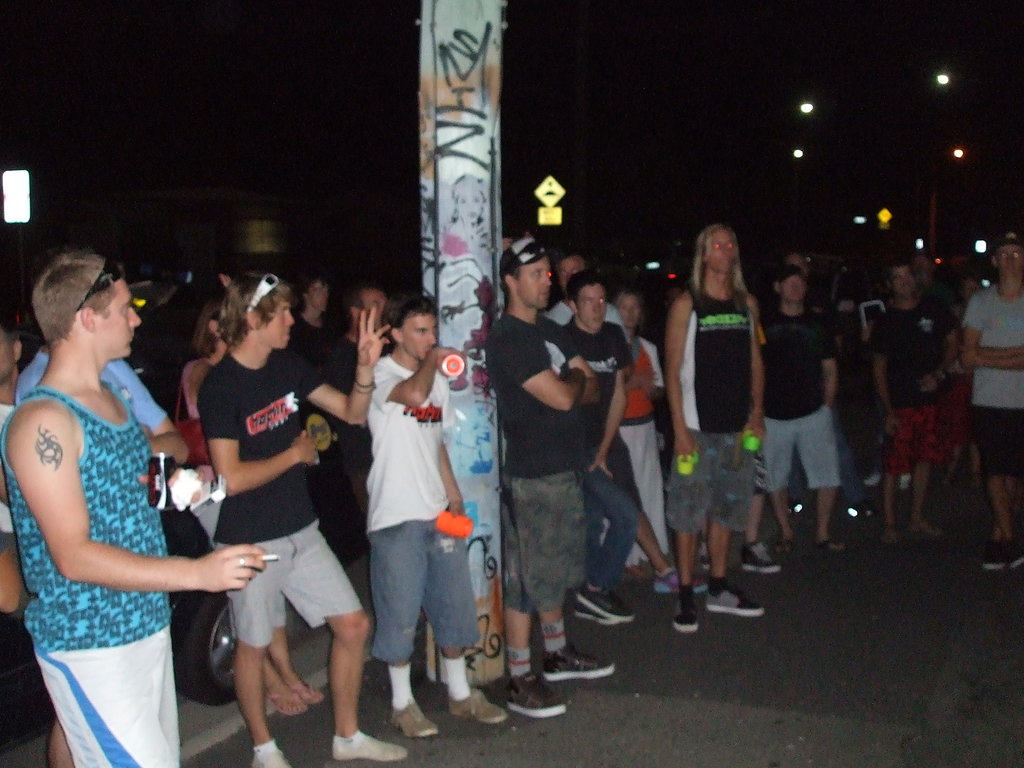 Cooper, this aint an auction, you can put your hand down! 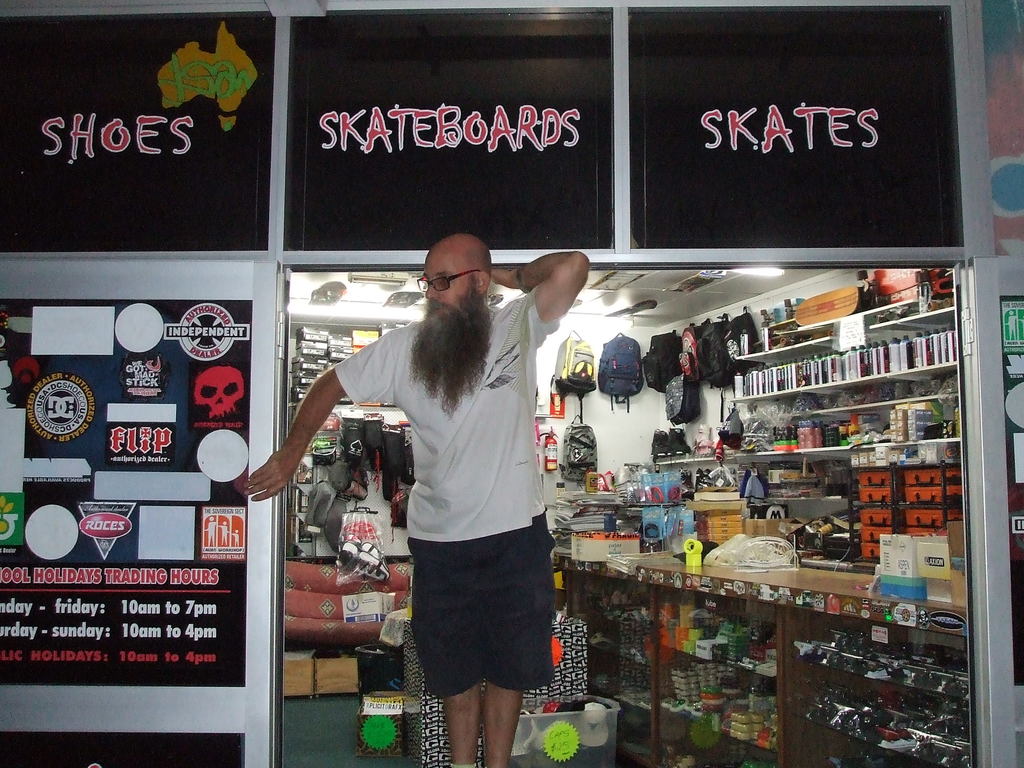 
And that's all for now folks. Stay tuned for news from the Mount!!!

Comment by Meddii Blackburn on May 15, 2010 at 0:43
These updates are better than the lousy texts I get. Putting names to faces.
Keep it up! These are gold.