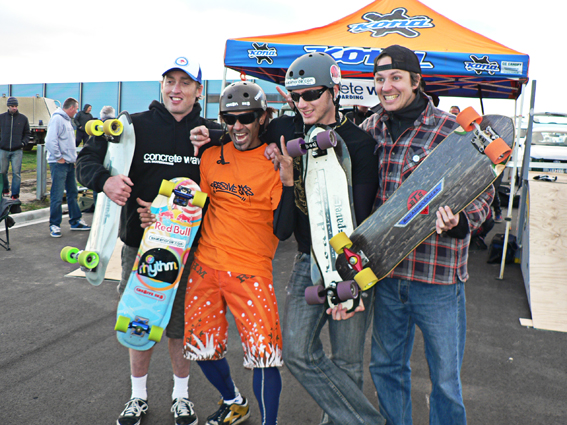 This was Melbourne's first time hosting the Conehead Cup, and the classic Melbourne winter weather; cold, wet and windy, was appreciated by all. The morning produced loads of frustration; the racers were unable to practice with any intensity due to the wet road and the organisers struggled with a new and temperamental timing system.

But the road dried, the timing system got sorted out, and the qualifiers began. The course played some tricks, with a "gimme" cone, followed by two tight, fast curves that tested people's ability to stay on line.

Steve Daddow was Mr Consistent all day. He beat Jackson in the final of the winner's bracket, and had to race him again in the Grand Final where Jackson succumbed to the pressure by DQ'ing and handing the win to Steve.

Outside of the winning group, there were lots of standout performers. Johnny McGrath started the day fast and then got even faster with every run, coming in eighth in his first ever Conehead Cup. Brad Sterritt ran fast all day, but it was Imi McMillan who took out the "Best Performer" award for the consistent improvement she's shown over the last year. Bernie Griffiths took home a trophy of a blood-stained cone for the "Best Slam" award, although Sean Mussett would have been an equally worthy winner for his high-speed high-side. 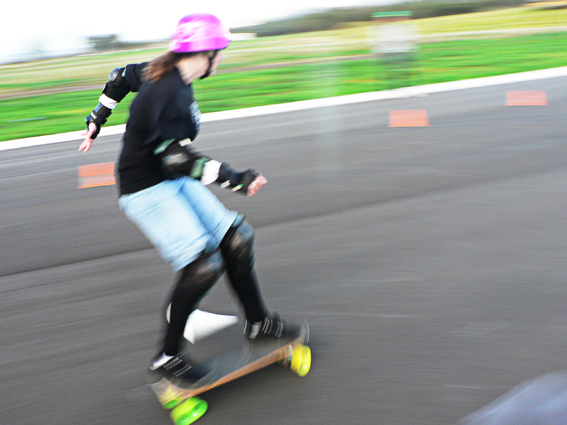 Note: The fastest times do NOT include the qualifying runs. * Bernie Griffiths for all his work on the timing system.
* Mark Winfer for the ramps.
* Dave Robertson and Paul Shaddock for manning the timer.
* Lea Robertson for running the draw and doing the registration.
* Haggy Strom, Dave Robertson, Paul Shaddock, Imi McMillan and everybody else for cone counting.
* Ludi for the BBQ.
* Hamish for the drinks.
* Braden Schlager for the trophies.
* NACCOS for turning out in force!
* Everybody else I've forgotten. Sorry, it was a tiring weekend...

Premium Member Comment by Marek on July 7, 2009 at 21:51
Thanks to all the organizers and the Melbourne crew for a great days skating. If your thinking about giving slalom a go turn up to a race, the encouragement and advice offered to this newbie coneslapper was unreal!

ASRA Admin Comment by Bugs on July 8, 2009 at 14:01
In the Results section above I've included everybody's fastest time during the elimination rounds. The general pattern was that people's times improved as the day went on.

There was one nice number that popped out; Paul Parry false-started by 0.001 second in his race with Steve Daddow.