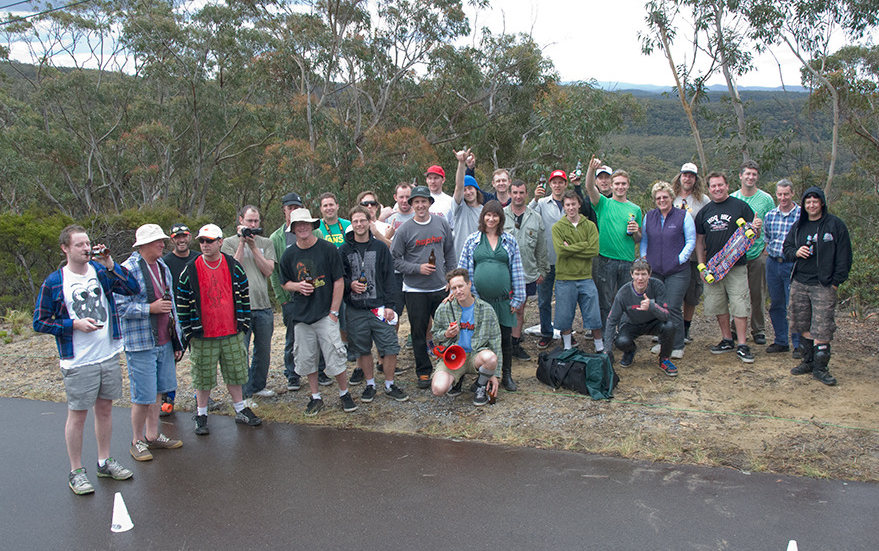 The final race of the 2009 Conehead Cup lacked the drama of the 2008 final. Last year was a shootout between Jackson Shapiera and Steve Daddow, but this year the top two had been decided in advance, with Jackson 1st and Steve 2nd. The rescheduling of the race from two weeks ago due to rain also produced a smaller than usual turnout. 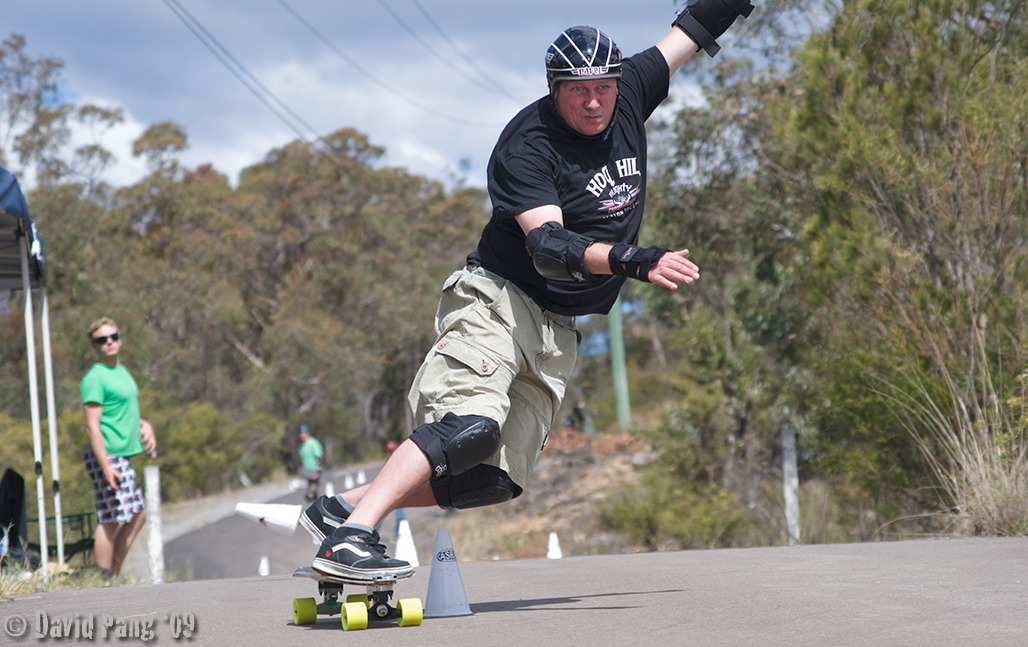 Jackson looks on as Paul Price clips a cone


But what the race lacked in drama it made up for with an especially cruisy and relaxed atmosphere. With perfect weather and a beautifully scenic location, racers were able to focus on skating the best slalom hill of the series.

Aside from the winner's circle there were two standouts on the day; Scott "Guff" Guthrie who continued his recent emergence with a best-ever sixth place, and Gabe Antonio who in his first-ever attempt at slalom amazed everybody by charging into the course with power and speed on every run. Despite DQ'ing every run he seems destined for good results by the time 2010 comes around. 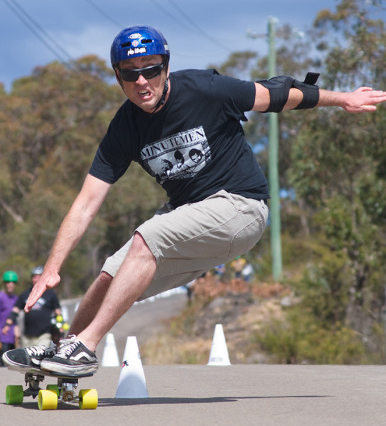 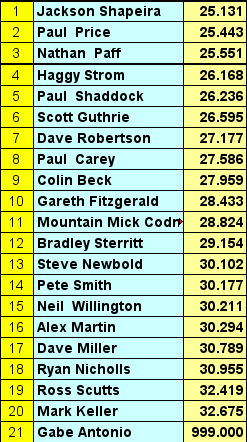 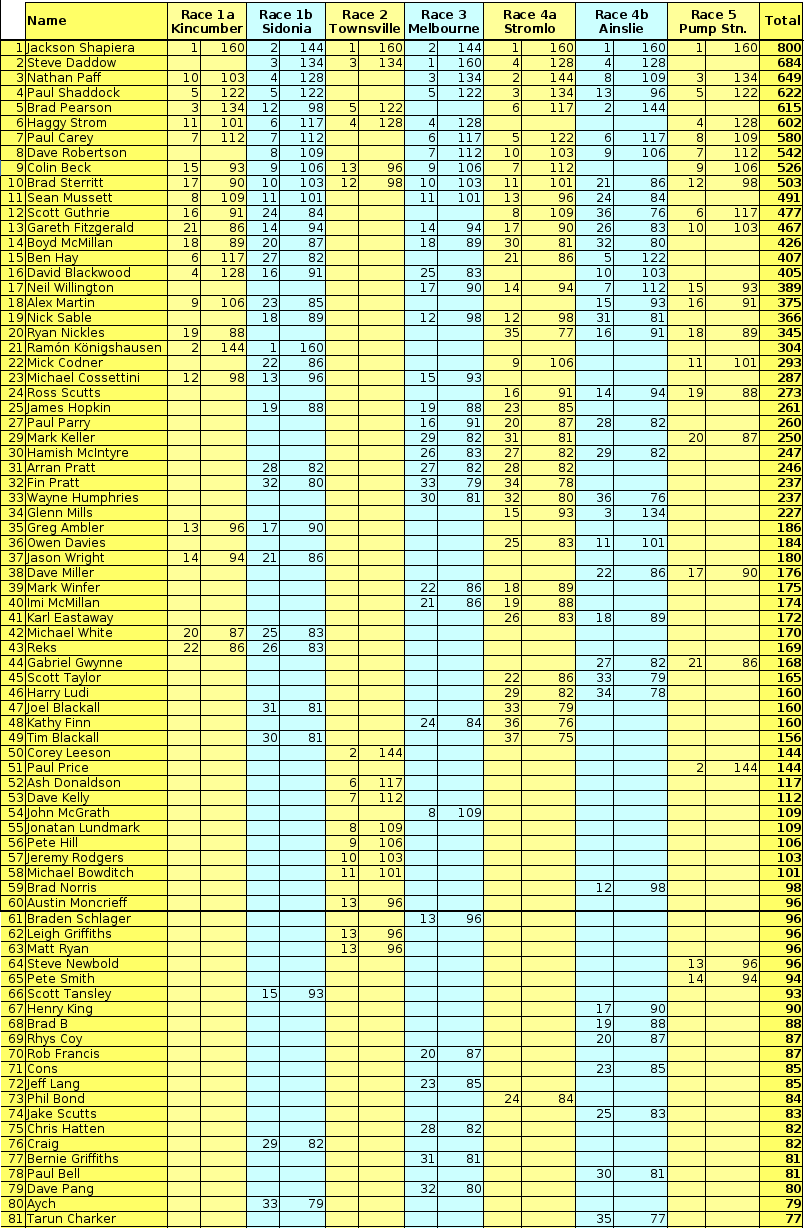 Note: The "Total" includes only the best 5 results.

* All the Timekeepers and Coneheads and Radio Comms people: Lisa Fleming, Lea Robertson, Lea Shapiera, Dave Robertson, Nathan Paff, Jackson Shapiera, Haggy Strom, everybody else...
* Paul Carey (and Brad Sterritt) for the start ramps
* Guff for sweeping.
* Everybody for helping set up and pack up.
* Everybody else I've forgotten. Sorry.

Awesome photos Pangy!! Thanks for documenting the day in with your fabulous shots.

To all who helped out all year - you guys rule. All the hosts, NACCOS, MOSS, CROSS, Blue Mtns Mafia and the Townsville Crew - keep up the good work!
And my ASRA brothers Robbo and Bugs for taking care of so many details.

The Conehead Cup is more established than ever. 2010 will be another great year and I'm sure we'll see more close racing with lots of guys stepping up to the plate. Stoked to be a part of it all...

Jacko - you dominated and deserve your victory. Keep it up young buck.

Premium Member Comment by nathan on October 19, 2009 at 8:54
WoooHooo!! Still buzzing from a great day and a great year! The Pumpstation is like the Bells Beach of Aussie Slalom I reckon and is just a pleasure to ride that course which has a bit of everything. I just looked at last years times on the charlie site as a point of reference given it is pretty much exactly the same course (except the addition of the start ramp) the time improvements are really impressive across the board, most people shaved 2 or 3 whole seconds off thir time last year, but Guff Shaved 8 bloody seconds!!!!!!!! Well done dude! It was really great to get to race Paul and Ramon this year and see how good this young fella Jacko is really doing. Well done Jacko, you have been great to watch all year. and cheers to steve too committng to all that travel to push the grom all year. We missed ya on the weekend dude!

Premium Member Comment by boydinaus on October 19, 2009 at 14:27
Well done Jackson. Looked like a great day. Sorry we couldn't be there, Imi was keen to give it a shot so we are going to test ride soon.
Guff stepping up! Shads 4th. You haff to try just a lettle bit harder Nathan....
Any one stepping up to the 55 and over class next year?

Comment by Guff on October 19, 2009 at 18:08
Awesome day Jackson well deserved win , not even Ramon and Paul Price could stop you winning the Cup . I am just so stoked to race with you guys and see the rivalries and encouragement push everyone . Can't wait till next year . If there are any NACCOs not happy with their situation the BMB can accommodate you .SUBMIT NOW TO THE BMB and we will show mercy......

Comment by Brad NS on October 19, 2009 at 21:13
What a year ! Thanks to ASRA and all the groups that held events .Cheers to everyone who came along and raced or helped out ...Thank you to my sponsors for helping with event prizes and getting me to all the races!!
PC my travel buddy and the rest of the NACCOS family !!! See you all next year ,and at NEWTONS !!