With four wins and two second places in his six races, Jackson has built an unassailable lead in this years points race. Wih just one race left this year, there is nothing his rivals can do to catch him. Second place is also locked up, with Steve Daddow well clear of the rest, but third place is a four-way fight between Haggy Strom, Nathan Paff, Paul Shaddock and B-rad Pearson, to be decided at Pump Station on October 4.

Thirty-seven skaters from Adelaide, Melbourne, the Gold Coast, the NSW Central Coast, Sydney and Canberra took on the Stromlo course on Saturday. The morning's practice session was filled with confusion as people struggled to unlock the mysteries of the "gate" in the course, but most had it worked out by the time racing began.

The early rounds had no surprises, except for the march of B-rad, who took out Dave Robertson, Brad Sterritt and Colin Beck before finally becoming overmatched against Steve Daddow.

Nathan Paff and Paul "Shadow" Shaddock resumed their rivalry, with Nathan's narrow win putting himself into a matchup with Jackson for the right to a second-chance run in the final, and sending Shadow into a sudden-death race against Steve Daddow. Shadow beat Daddow for the first time ever, while Jackson's win over Nathan consigned Nathan to a rematch with Shadow for the right to race against Jackson in the final. Nathan beat Shadow a second time, and then had the daunting prospect of having to beat a relatively fresh Jackson twice to win.

A tired Nathan threw everything he had into the final but fell just 0.24 second short, with Jackson taking out the race undefeated. Shadow was third, Daddow fourth, and the ever-consistent Paul Carey getting
his best result of the year with fifth.

Special mention for slalom newbies Scott Taylor (22nd) and Owen Davies (25th) who looked at home in their first race, and for Joel Blackall who was unlucky not to break into the top 32, from where he would have likely met up with fellow junior NACCOID Imi McMillan. Sunday morning saw some tired heads assemble at the infamous Ainslie Ditch. Just as on the day before it was thirty-seven riders who were willing to take on the teeth of doom, in a jam-format race with every rider getting six timed runs.

Glenn "Ditch Master" Mills seemed intense and focussed, while fellow ditch-master B-rad pronounced the course "too easy", despite nearly everybody else struggling to negotiate the final four cones where accumulated speed met a sudden tightening of the cone spacing.

Shadow took the early lead, but soon it was Glenn Mills, B-rad and Jackson who filled the top three spots. The headwind picked up throughout the day, but it didn't stop people posting faster times as they began to feel out the course. Jackson led by 0.5 second at the end of the third run, and the race was still open, but Jackson's fourth run shaved another 0.5 second off to give him a comfortable lead, and then his fifth run shaved a further 0.5 second off, leaving everybody far behind. B-rad kept improving his times, overcoming Glen Mills to gain second, while Steve Daddow suffered a nasty slam in a desperate attempt to crack into the top three, failing by just 0.004 second.

There was another episode in the Alex vs Blackwood show, with Blackwood's final run cutting two seconds off his best time to beat Alex and sneak into 10th place. Ben Hay produced some smooth runs to get 6th place, and Canberrans Henry King and Owen Davies produced some fearless attacking runs. Phil Bond had the worst slam, closely followed by Steve Daddow and Neil Willington.


Previous Discussion...
...about this event is here and here.

* The timers: Dave Robertson, Simon Henderson, Nathan Paff and Sean Mussett.
* The coneheads: Pip Shapiera, Cons and Will.
* The timing system whizz: Arran Pratt
* Dave Pang for organisational thoroughness and MC’ing at Stromlo and the Skatesman.
* All of CROSS: Neil Willington, Paul Parry and Ross Scutts for all their preparation and work throughout the event.
* Shadow for the number-crunching.
* My chauffeurs: Nathan Paff and Blackwood for going out of their way.
* Everybody else who helped out throughout the weekend, setting things up, pulling things down, running and fetching things etc. It was truly a group effort. 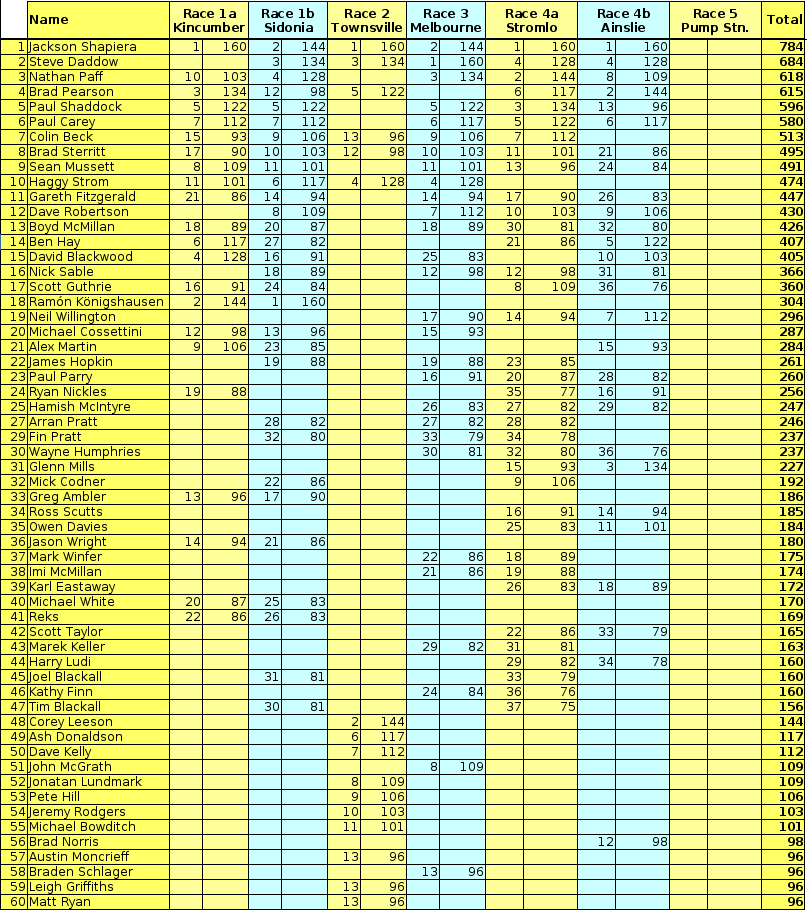 Click for hi-rez of the Conehead Cup '09 points tally.

Premium Member Comment by Stephen Daddow on September 22, 2009 at 15:25
Congratulation Jackson for the double win on the weekend. Yet again showing why he is the number 1 Australian Downhill and Slalom skateboarder. Keep on ripping it up Grom !!! Congrats to the NACCOS crew showing they are a strong force and taking out both 2nd and 3rd's in both races... What a great weekend of racing and riding.
Thanks to Owen and Haeli for the hospitality over the weekend. Thanks to the CROSS crew for putting on such a good event. Thanks Davo, Ben, Simon, Jacko, D Rad, Gab for the road trip and stay over. Thanks to Cre8ive Sk8 ( Ado ), skatehored.com ( Hop ), Rhythm for the supprot...

Comment by Eddie Spearing on September 22, 2009 at 23:59
Fantastic write up Bugs and once again amazing photos Mr Pang. I'm looking forward to Newtons and we have a mini NZ team of 4 coming over. Should be good.

Comment by Shadow on September 23, 2009 at 0:34
Excellent weekend! Great to catch up with all the crew. Nathan was shreading on Saturday and great to see Millsy back at it plus heaps of new faces enjoying the scene.
CROSS you guys put on the best weekend and everyone always looks forward to it. Thanks.

Premium Member Comment by haggy on September 25, 2009 at 10:44
Man - I can't believe I missed it!! Sounds like it was a mad weekend. Big congrats to Jacko and the Naccos lads, some serious racing obviously went down. Gotta get my practice on for the mountains, i'm gunning for third boys!!!