Leeso Reigns Over the Hill 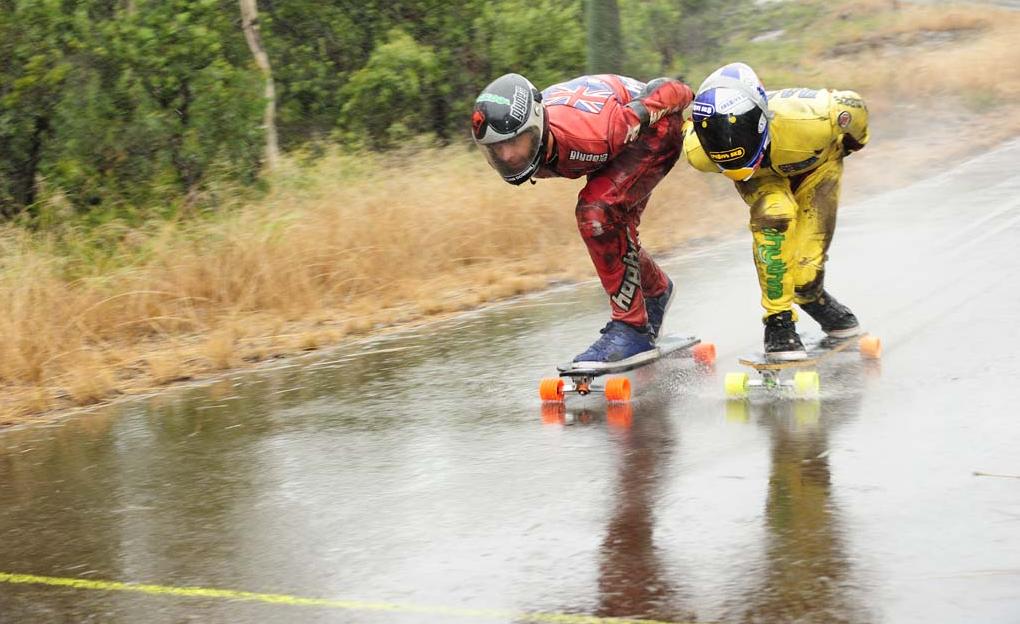 The Blue Mountains weather can be unpredictable, but on Saturday there was no doubting the conditions would be wet. It had been raining for a week, and the rain was forecast to continue for more days to come. Rain wheels had been the talk in the lead-up to the race, and a load of urethane dust had been expelled from home-made lathes.

The rain caused a number of late scratchings, but 61 hardy souls came out to race. Early practice runs were slow and cautious as people felt out the grip level. 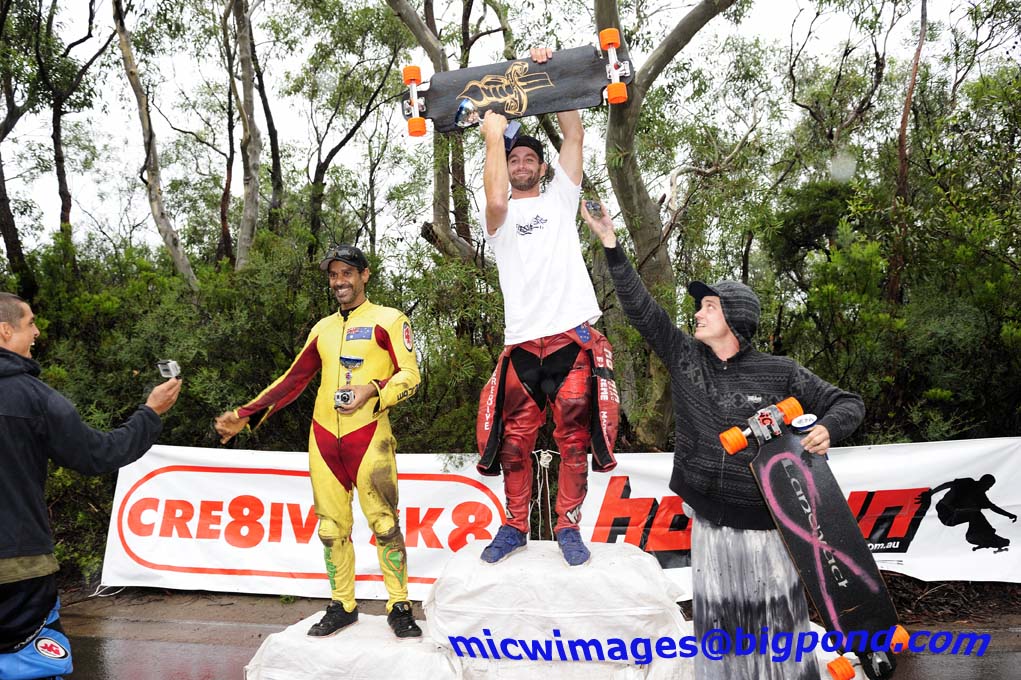 The double elimination format with random seeding threw out some interesting matchups. Last year's runner-up, Dennis Westphal copped a horror draw, getting knocked out by B-Rad Pearson and Kibbling in his first two races. Rob McWhinnie looked the early favourite when he despatched Kibbling, but had to settle for 5th place after being beaten by Leeso in the round of 4, and then beaten by Kibbling in a rematch. Kibbling showed his racing experience (and some pale Canadian legs) with a line that made drafting and passing difficult, until Steve Daddow squeezed between him and the banners on Camp Corner in the most audacious passing maneaouvre of the day. That move put Steve into the final with Leeso, who had just beaten Steve to get to the final undefeated.

Leeso had been perfect all day, but again Steve threw himself into a gnarly pass at Camp Corner and beat Leeso in the ensuing draft race to the finish line, forcing an instant replay final, and the third Steve-Leeso matchup of the day. This time Leeso held the inside line on Camp Corner, forcing Steve to go wide, and they hit the finish line side-by side, with finish-line adjudicator Hop declaring Leeso the winner by "half a wheel". It was a well-deserved win, and a sign of the strength of the Queensland crew, with Quenslanders in 1st, 2nd, 4th and 7th. 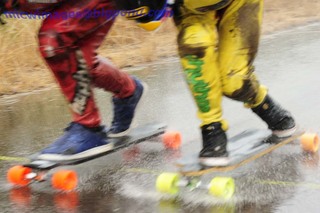 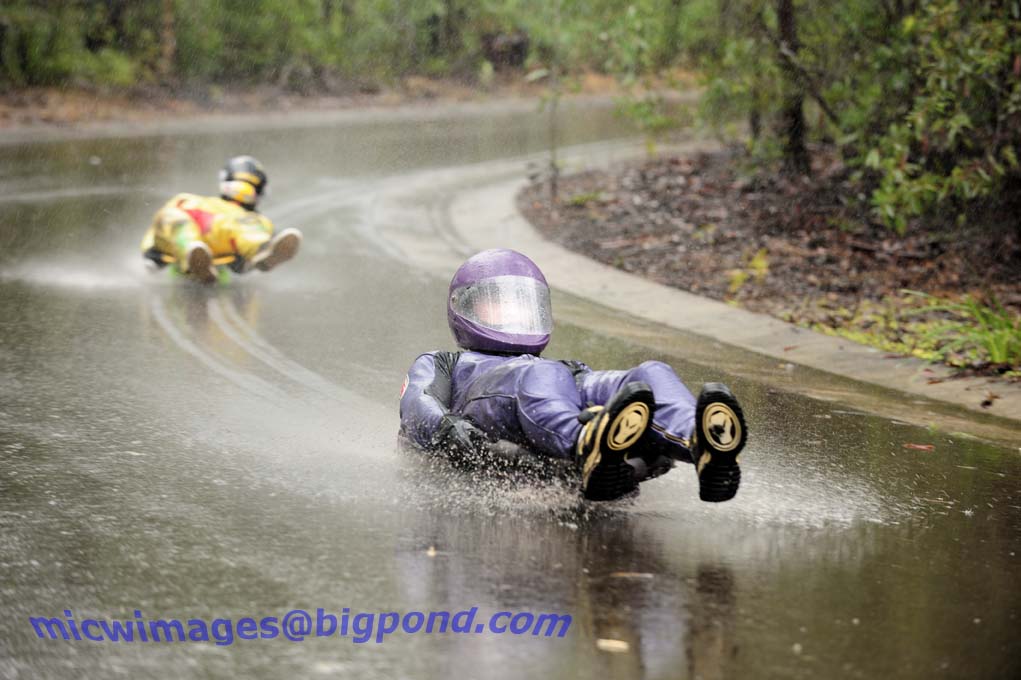 This was a race with three stories. The first is Phill Champion, who calmly beat every rider he faced without looking stretched. The second is Steve Daddow, who claimed to be a first-time luger but matched his second place in the Open Skateboard with a second place in the Luge. And the third is Scott "Guff" Guthrie, a recent convert to Luge who staked his claim as the giant-killer (or is that giant killer?) of the sport with wins over Nic McKirdy, Daz and Brad Sterritt before being beaten twice by Steve Daddow. Guff overcame slow starts to mow down his opposition with a ruthless and intimidating style. 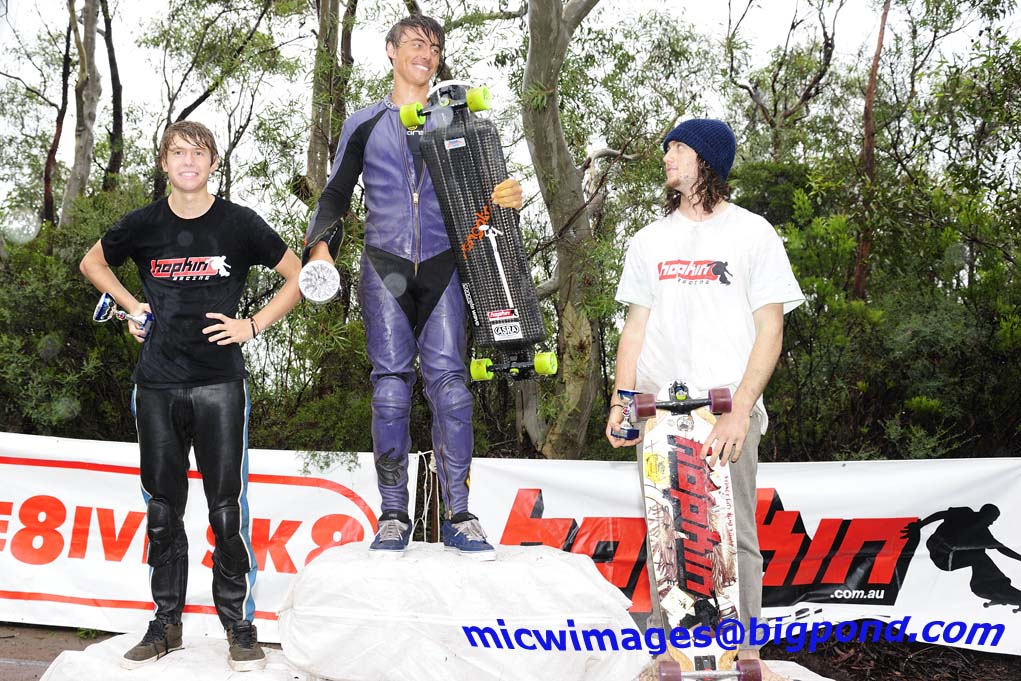 Merrick Wildash flew down from Queensland for the race and proceded to show that he is the fastest Junior in Australia. The expectation was that Merrick and Gabe Gwynne would battle out the final, but Gabe never seemed in the race, losing first to Merrick and then to grom Cooper Kruize. Merrick beat Cooper in the final to make it a successful weekend: 1st in Junior Skateboard and 4th in the Open Skateboard. 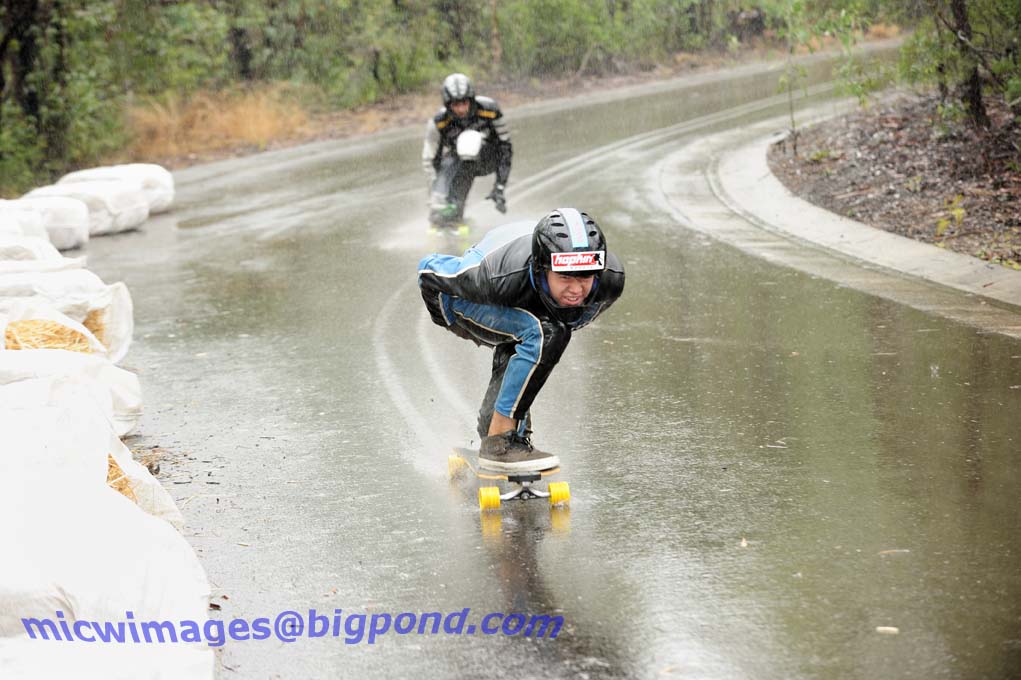 The groms were the stars of the day, with not a single race of experience among them, and having to deal with a wet and slippery track. Scott Poole looked the early favourite, but Cooper Kruize wore him down in the two finals with his consistent and solid tuck. The day's youngest competitor, Ilan Aarons took out third.

* Race-day admin: Hayley on the start, Lea Shapiera in the middle, Hop at the end, and Blackwood on the bales.

* Everybody else who chipped in on the day, before the day, or at the death. Everybody who travelled to be there, near or far. Thanks.

Note
Previous discussion about this event is here.

Premium Member Comment by Dave M on February 8, 2010 at 9:55
Well done to all the winners.
Thanks again to ASRA and the BMB
Thanks in advance to the guys with the cameras. Im sure they must have some good pictures comming up soon.

Comment by Hop on February 8, 2010 at 10:00
Mick White - AWESOME photos. That luge photo looks like wakeboarding!!!
Thanks to everyone that came out, Great day. Close racing, especially at the end in the finals.
Thank you to all the racers that crashed after the finish line to keep me entertained. Special mention to Cooper, who did a superman face plant. And Phil Champion scaring the hell out of me on his luge, swerving through the finish line, he said he could not see where he was going. WTF.
Guff and Daddow's monumental launch of themselves into the luge scene.
In teh downhill final, Leeso and Daddow race almost turned into roller derby, with them both shouldering each other and not giving an inch all the way down the hill.

Premium Member Comment by Stephen Daddow on February 8, 2010 at 10:10
Awesome day of racing !!!! Some of the best fun racing I have had and in the rain to. Congrats Leeso, Merrick, Phill and Cooper on you wins!!!! Thanks to ASRA for putting on another great show and the crew who came and raced in the rain....
Stoked to have come 2nd to the best in both my races and I think I will be riding the butt board a lot more..... Thanks for hooking me up Sparks with the SBB..
Another thanks to Jacko and his Family for looking after all of us skaters again.

Premium Member Comment by leeso on February 8, 2010 at 10:27
hell yeah that was one of the best races ive been to with some super close racing and the epic battle in the pouring rain between wet and dry wheels..thanks to all the asra crew you guys had to hang in the wet all day and watch us have all the fun..thanks to all the sponsors ado and hop,also moutain mick and crew for putting on the barbie and setting up in the wet you guys are ledgends...big ups to jacko and the family for looking after a bunch of smelly messy skaters again...congrats to phil for the buttboard win and steve for showing his true tallent and making it to the finalls..merrick you were riping all day bro nice job taking out the juniors and doing so well in the opens...and to pete at glyde for yet another amazing board this thing rocks..

Premium Member Comment by Jacko on February 8, 2010 at 10:33
wow what a race, spewin i couldnt race but it was so exciting to watch. Guess i had to give you all a chance one day ey?
It was awesome to see some new tallent coming out of the wood works, sydney groms are ripping! i wanna see you guys out at more downhill sessions you have proved to show a lot of potential!
Big ups to Leeso, MASTER OF THE HILL! You raced solid all day and it certainly showed. Steve dawg was in full force and busted out some of the sickest lines ever without rain wheels! was awesome to see. Kibb-Dawgz was showin his canadian style and was a pleasure to watch you race.
All the sydney boys, Luca, Rob, Kam, Grommet and the rest of the SCBS you guys were ripping, everyone is showing such good style and race form it was awesome to see, cant wait to skate with you all again!
Props go out to the event organizers, crew from ASRA and BMB, and sponsors Hopkin and Cre8ive for hookin up the crew with some money to blow on more skate gear!
Well done everyone one, was such a sick race and im stoked to be there to watch all the action!

Comment by Ryan 'RY RY' Peterson on February 8, 2010 at 10:41
wat a rad day!!!!!
gratz to leeso, phil, merrick and cooper!!!
well done to all that competed and special thanks to BMB, ASRA ,HOPKIN,CRE8IVE SK8 coz without u guys it wouldnt be possible!

Comment by Sue Wickenden on February 8, 2010 at 12:33
Thanks ASRA and congrats to the winners. Great intro for us newbies. I found I didn't mind eating hay. :)

Premium Member Comment by Ian Coggan on February 8, 2010 at 13:59
what a sweet day. i'll be training for a good time at the cone head cup.... well done boyss sweet day

Premium Member Comment by Ian Coggan on February 8, 2010 at 14:00
does anyone know know where all the photos can be found?