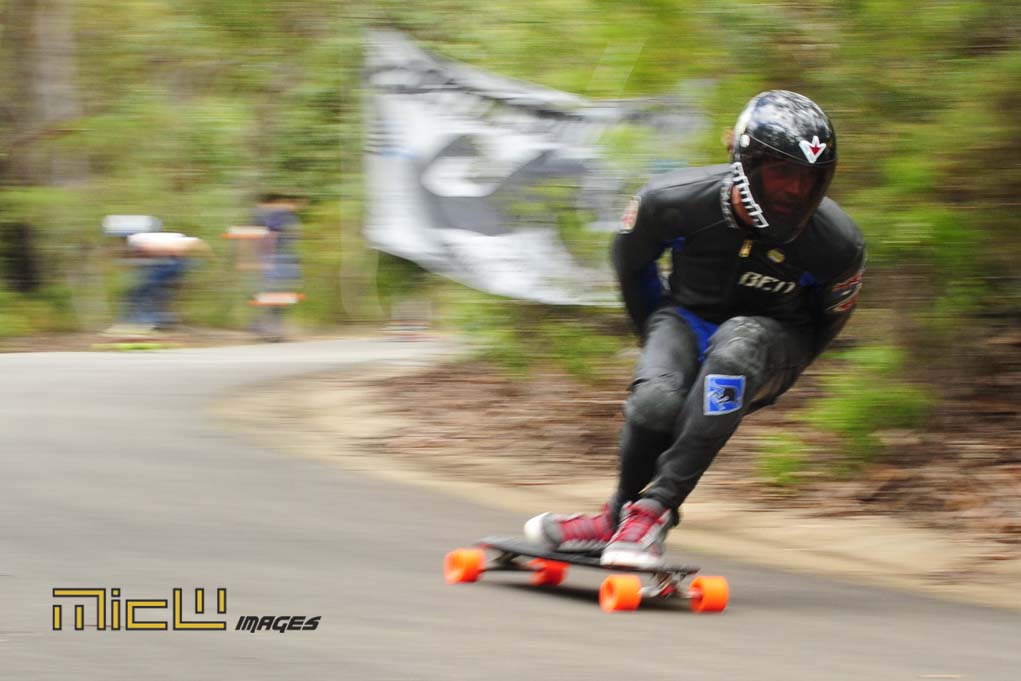 NSW rider Ben Hay has continued his recent dominance of the Australian domestic racing scene with a commanding performance to take out the the 3rd Master Of The Hill event. In a highly fancied field he led from start to finish beating  QLD rider Corey Leeson who was in a tight battle for second with Jackson Shapeira. The ASRA crew arrived at the Pump Station at 830am to find the hill already packed full of riders. When registration opened at 8:45am a line formed not seen since the food rationing of the 1930s. With a rider cap of 80, competitors anxiously lined up not knowing if they would make the final list with the event promptly selling out by 930am.

After a brief rider meeting competitors headed to the top of the hill for qualifying. Luca Coleman and Steve Daddow led out the early pace with times of 46.25 and 46.64 respectively before Canadian international Tony Graves shrugged off his recent injury by setting a the top time of 45.411. With seconds rapidly coming off the clock NSW rider Ben Hay immediately rose to the challenge and threw down a blistering run taking top spot with a 44.472 pearler. He than anxiously waited through the rest of qualifying knowing that Jackson Shapeira was near the end of the list and was looking to post a fast run in his return from injury. When the time came Jackson pushed out strong and looked incredibly fast and tight through the bends but in the end it wasn't enough with Jackson posting a time of 44.534 being edged out 0.062 of a second. 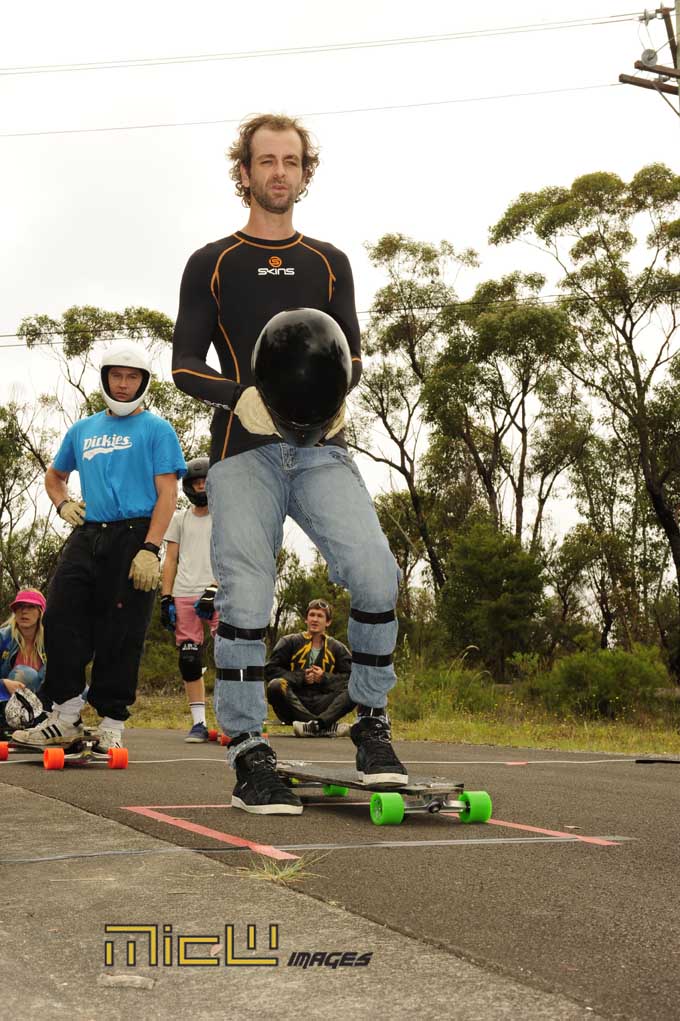 In the Juniors Central Coast rider Ian Coggan announced his arrival on the scene with a time of 46.811 edging out recent World Cup podium rider Cooper Cruize with a time of 47.153. Young Brendan Fewre also posted a very fast time of 47.822 before Toby Dind and Tom Wray rounded out the top 5 with times of 47.859 and 47.875 respectively. 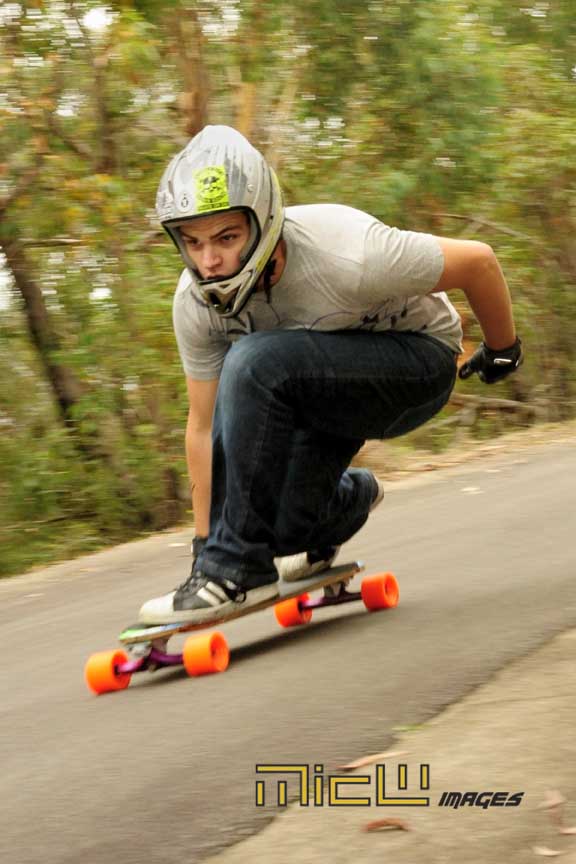 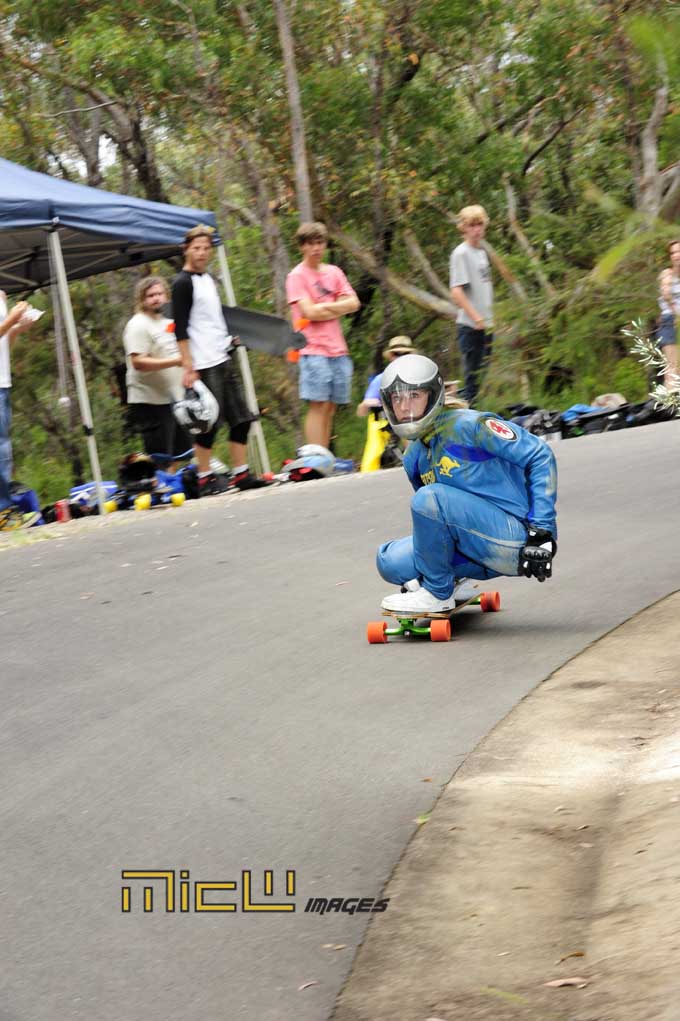 In a race friendly format riders were seeded into 5 groups of 16 and were required to progress through a round robin format of 5 races each to take one of the three finals spots available in each group that would have them progress through to the round of 16. In group A, Ben hay, Steve Daddow, and Central Coast Junior Ian Coggan all had early wins with each pushing through to the final rounds with Ben Hay remaining undefeated and looking strong. Group B showcased Hopkin team riders Jackson Shapeira, Junior Cooper Cruize and Luca Colman easily progressing with commanding performances. 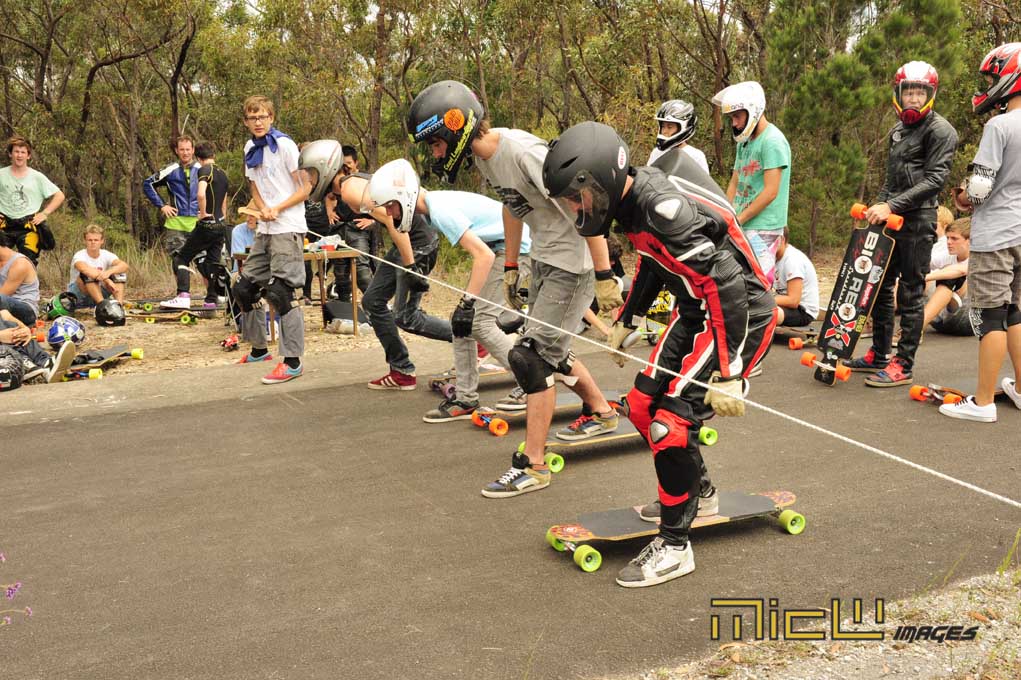 Group C showed a dominant performance by Canadian Tony Graves to win all of his races with Capital Dirty Downhill rider Henry King taking 4 wins. The third spot was a close battle between the 2010 Junior World Cup Series Champion Merrick Wildash and Central Coast surprise packet Tom Wray with Merrick edging him out but Tom still taking 16th spot in the finals as the best 4th place getter. 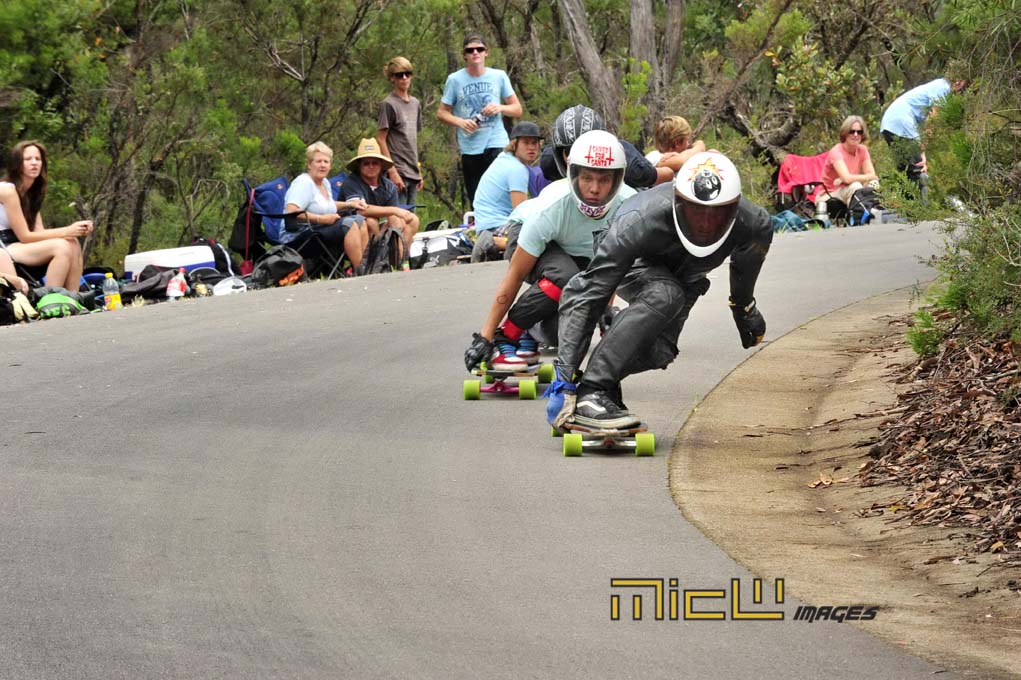 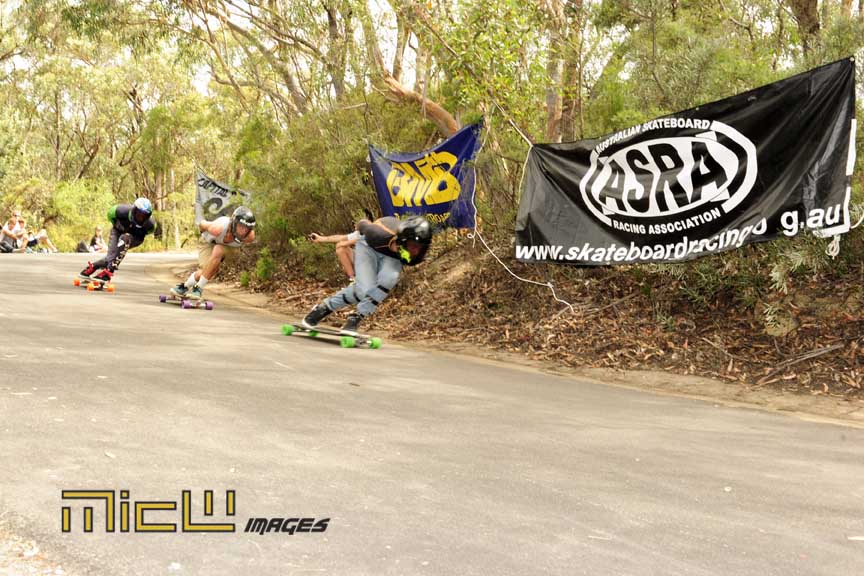 The round of 16 produced a series of photo finishes culminating in an allstar final with Ben Hay, Jackson Shapeira, Cory Leeson and Cam Kite. Ben Hay came around the last corner and into the main straight with lead of 3 body lengths with a tight pack in pursuit and looking for the draft. Leeso and Jacko battled shoulder to shoulder to the finish looking for the draft on Ben. In the end Ben Hay took the win with Lesso edging out Jacko by a wheel in an incredibly tight battle for second and Cam followed into forth by half a board. 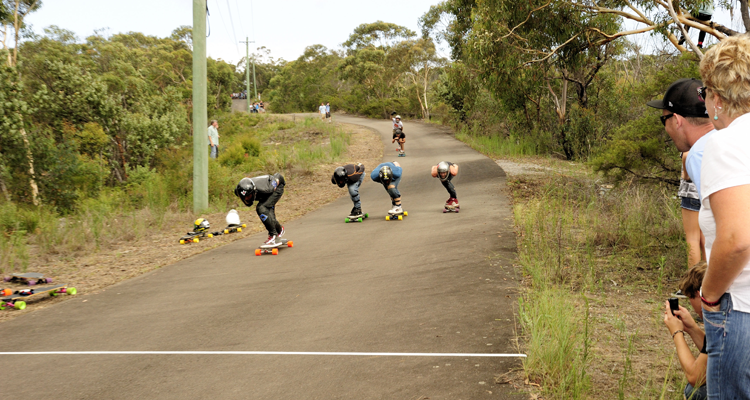 The Woman's final was a fantastic race with Lea Robertson leading from start to finish to take the win and surprise of the day young Belle de Graaf finishing strong to take second ahead of sister Brit de Graff and Imi McMillan with Deane Panya lucky to survive an early crash to finish in 5th. The Junior result had Cooper Kruize continue his World Cup form to take a very commanding first with up and coming Tom Wray getting a very fast second place. Ry Ry was unlucky to get disqualified for a push line incident in the final handing Toby Dind the last spot on the podium Big thanks go out to Trav for organising this years MOTH event and doing the early forum gruntwork. BMB's Ross, Steve, and Mountain Mic for running the BBQ and preparing the track. My ASRA brothers for running the racing, rego and all the admin. Mic White for the fantastic images of the day, Lea Shapeira for the finish line results, The gromet at the top of the hill (you know who you are), and all the interstate riders for traveling up, down, and sideways to the event.

A huge thanks to our sponsors who continue to help us foster a great racing scene and allow us to run these fantastic events: Premium Member Comment by boydinaus on February 2, 2011 at 6:17
and thanks to Robbo for lending Imi a board!

Premium Member Comment by Ian Coggan on February 2, 2011 at 7:05
watch out!! NACCOS are coming in fast. and are keen to win. well done benny

well done to all the girls that stepped up and rode, next time I want to see twice as many girls riding! then we will see some scene progression.

well done to all the guys that raced hard.

well done to the canberra boys for going.

also Rhyc's pelvis has been screwed back together and he will be fine.

Thanks BMB & ARSA. Great day in the mountains.

Trav, thanks for your massive efforts in helping the sport grow & organising the event.

Congrats to Ben for a hugh win. Great final.

Oh yeah, Ian. You don't need to tell anyone to watch out for NACCOS.

That's not how we do it. The quiet achiever approach is how we roll. ;-)

Well done to Imi, in her 1st DH race.

yeah BenBro! what a charger! dude was ripping solid all day.

man i was so blown away with the level of riding on the weekend, so many people were stepping up and giving crew a run for their money. The grommets of today are skating so well, keep it up guys your all shredding.

Also great to see a good turn out for the chicks races, that was epic!

Thanks heaps to all the crew who made this possible, was great to be able to race that hill again!

Leeso enjoy the victory coz it will be the last time i let you beat me! mwahahahaha! good job brother

big thanx to the sponsors and competitors,and congrats to all the placegetters.....

this event was a true indicator of the growth in our sport in recent times,lots of new faces,lots of fast groms and a womens race that was great to watch,huge improvement by all riders.....congrats Lea,rippin.

thanx to jacko,gabe,kam,luca and crew for being there to shred gnar with and keep us progressing.