Kiss of the Hill Robby and I moved to Byron at the start of the year and 5 Months ago I started a group of skateboarder-girls called The Byron Chicky Babe Bomb Squad. First we were friends skating local carparks and hills in our local town, each with such unique and different style. Since then we've got more girls joining us and leaving their short boards for real and faster longboards.


I’ve always been fascinated about the different way of each girl to skate their longboard and since the beginning we've always been learning from each other. So I decided to give them their first downhill skate trip experience, taking them to a 3km long hill with more than 20 curves.

Some months ago, I was in a comp up in Brisbane I met this great skateboarder chick Rat, she gave me great tips to improve my style and recommended me an amazing hill to take my crew for a real  first contact with speed, adrenaline and long hills: Hill Climb in Noosa. 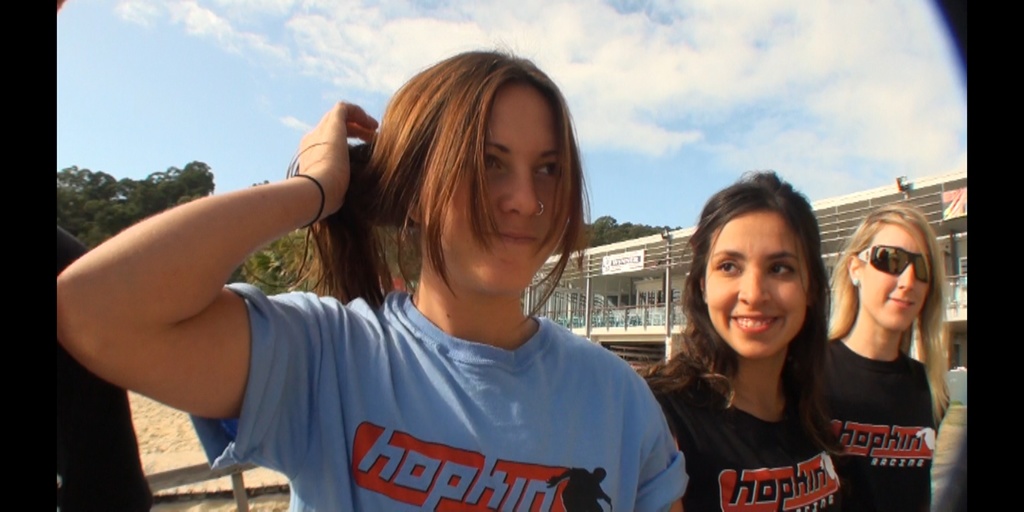 Phoebe, Maga and Lea Getting some morning sun at Noosa

I invited all the local crew, friends from Sydney and Gold Coast including Sydney Girl Crew and a good friend of mine Lea Robbo. Everyone was so excited and counting each day until the trip with some training.

The day came and all the girls were frothing to depart into our first skate trip as a crew "only girl skate"....our first kiss to do some downhill in a real mountain together and shred it!

And so we did. And it became an amazing adventure it joined us closer. It shows our community is like a big family and gave each of us great experience and an eternal smile with just remembered it. Mel showing the smile of a RAD day of skating

Well First Kiss was not only the first time id been on a road trip with girls but the first in Australia with 12 female riders, Holy Sh*t that’s whole lot of girls, I had no idea what it would be like, we thought that the more fun we have the better the trip will be, it turned out to be an absolute cracker. Rob McWinnie at the Byron Skate House explaining how he is gonna wake me up at 5am.

Leaving early Wednesday morning Robbo and Lea from the HopShop helped me pack the van with well over 20 boards, all had been dropped off the night before for some Rob-tec downhill tuning, we made it down to the Bayleaf Cafe and found all the girls already waiting, it was so obvious none of them had got any sleep due to their stoke eyes, all of them keen as mustard even as it bucketed down rain. 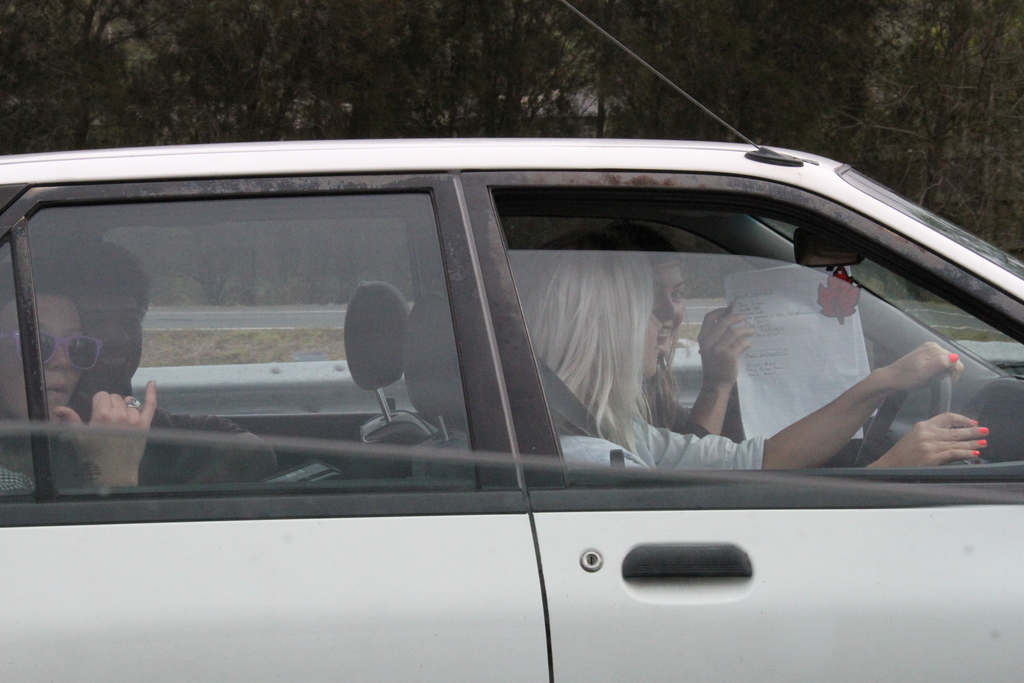 Somehow Frenchy (Bryan) got himself in this car. Kaidee and Tiia obviously planning their race lines in the front

First stop was gateway 5 in brizzy to meet and greet the crew and have a slide in the carpark, it was still raining and the idea of beating the weather up there was slim, until Ash Gromatage gave us the weather report from the hill, " clear skies and warm, ready to shred" Noosa was by far the biggest hill all of the girls had skated except for lea and Mullet who did a few Oslo Races coming out on top, the stoke was starting to build as we got closer to the Hillclimb, the weather had cleared up and it was warm and awesome. When we arrived at the summit the chicky babes where greeted by 10+ grommets and guys all dressed in skanky hilarious dresses and make up, hoping that this stunt might get them a ride on the hill with the pretty and stunning chicky babes, they were right, it was so funny and really helped to break the tension and nerve of the less experienced girls, god it looked funny, Mike English took the cake for dirtiest skank dressed up, I felt sorry for the guy giving him bum draft. 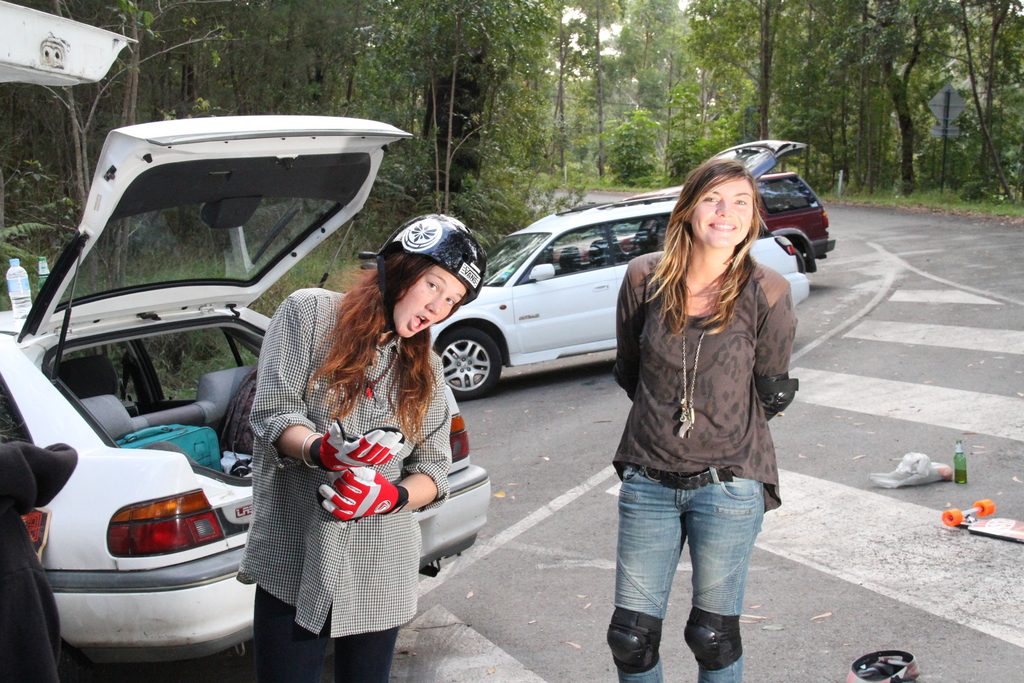 Phoebe and Kaidee geared up and ready

All the girls suited up in helmets, pads, gloves and duck tape thanks Robbo and Hop for bring heaps of spare gear for the girls and Early for RAD pads,  frothing to have a ride we organized a buddy system for the girls to ride in until comfortable, 1 guy and 2 girls would go at a time and they where coached down the track, thanks all the Gympie boys and locals for helping out, the girls said you all did an amazing job. Natalia dialing her tuck in and showing us all why guys love looking at girls skating.

As the girls came rolling in the stoke was off the chart, I had to sit this trip out still with injuries hey, but just the flow of emotion and stoke was wearing off on me and I had an amazing time just feeding off the girls, my wife Maga has blown me away lately, skating so convincingly and passionately, I’ve never been so proud of her, she has the need for speed now and I couldn’t be happier. Apparently Maga, Tiia, Mel and Kate really took a liking to the hill and made the run no footbreak and mostly tucking, even over the wet patches and debris after only a few runs, yeeeww.

The girls follow each other and trust each other when on the hill, when one tucks they all tuck, when one breaks or rails they all go, the footage looks amazing huh. 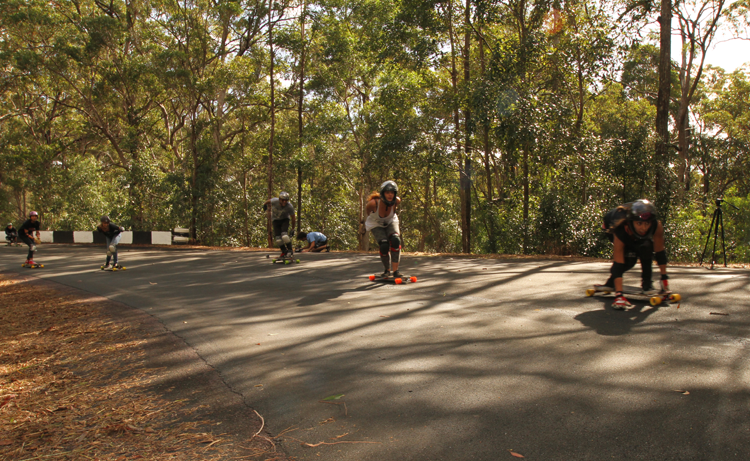 The main pack, Maga, Kate, Tiia and Mel loooking for the fast line

After a massive day traveling and skating we hit the hotel and organized dinner, Kate hit up a local and found a cheap Thai place, we fed all 20 of us for 10 bucks each, then we converged on the conference room in the hotel, hooked up the lap tops and watched some of the days footage a big screen, Robbo ran an impromptu Raffle, everyone got like 5 tickets and Robbo opened up his skate bag and started drawing, the girls and grom where so stoked, they didn’t quiet know what a titanium ceramic water proof bearing was but they liked it anyway, Hopkin Racing shirts were like gold being snapped up too. Lea Robbo and Maga, taking in the morning Noosa sun

The second day started with a beach trip and then to the hill, it had been raining and whole run was soaked, but Maga lead the way like mother goose and all the girls geared up and bombed, OMG if I thought they had calmed down after the initial runs I was wrong, every run resulted in hugs and kisses at the bottom, was so cool to see the girls connecting on hill on their longboards like they could never before. 
we got heaps of filming down and the riding just got quicker and cleaner, soon we would be packing the car heading home via gateway 5 for a sunset session, Lea dominated the session riding like a bomb, was stoked to see how aggressive and close she was to the boys. Yewww it was an amazing trip like no other, all the girls did me so proud, Tiia was smooth, Mel was fast, Kate was riding all of the hill, Pheebs was sliding, Natalia was improving every run, Tilly was styling, Maga was shredding, Kaydee was going hard, lea was dominating and showing her all round raddness, Lyn was looking good and bombin 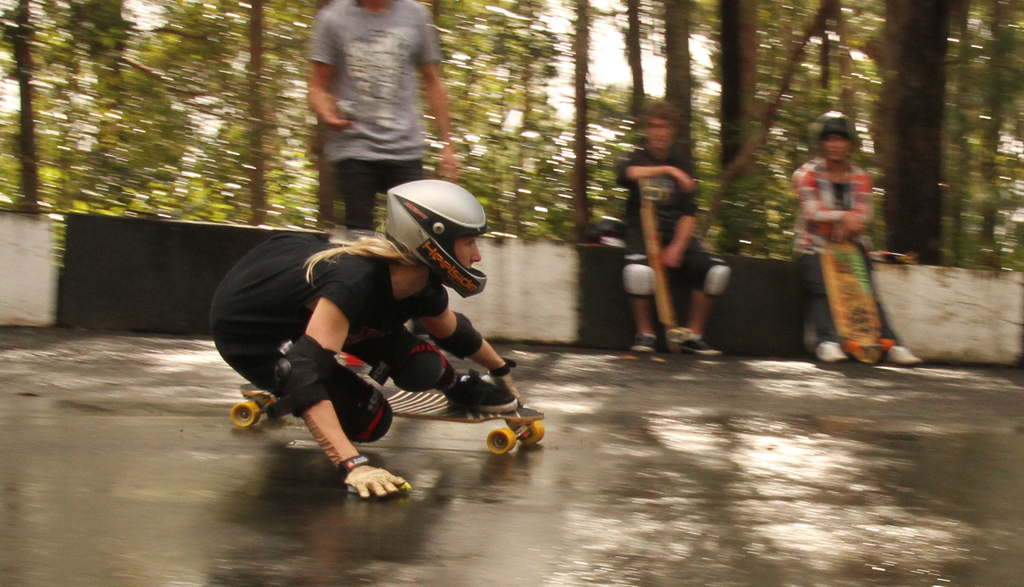 Lea getting her slide on

Great weekend and heaps of girls shredding, thanks HOPKIN for all the spare gear and helping build this amazing crew of female skaters, same to Early skateboards thanks for training the girls down the hill, driving them to the top, spare gear and filming. Thanks Pat and Frenchy for keeping the girls stoked and Ash for being a RAD grom

I was not sure what to expect from the Byron Chicki Babes when I arrived for two days of riding on the Noosa Hill Climb track.  I’ve known Maga McWhinnie for a bunch of years, but I’d never met or skated with the rest.  For most of these ladies this was to be their first downhill experience.  And gleefully they lapped it up! Maga, the inspiration of the Byron girls leads them down the hill

A lovely thing about these girls is they have style and they have guts.  Over the two days I was struck by the individual manner of each girl, in character and in skating.  They showed some skill in dancing and sliding, but this event added to that a taste for speed.  In spite of the wet track they ALL still skated.  Many appeared at the bottom drenched and covered in dirt and grit from stacks, but with a massive smile, totally stoked! 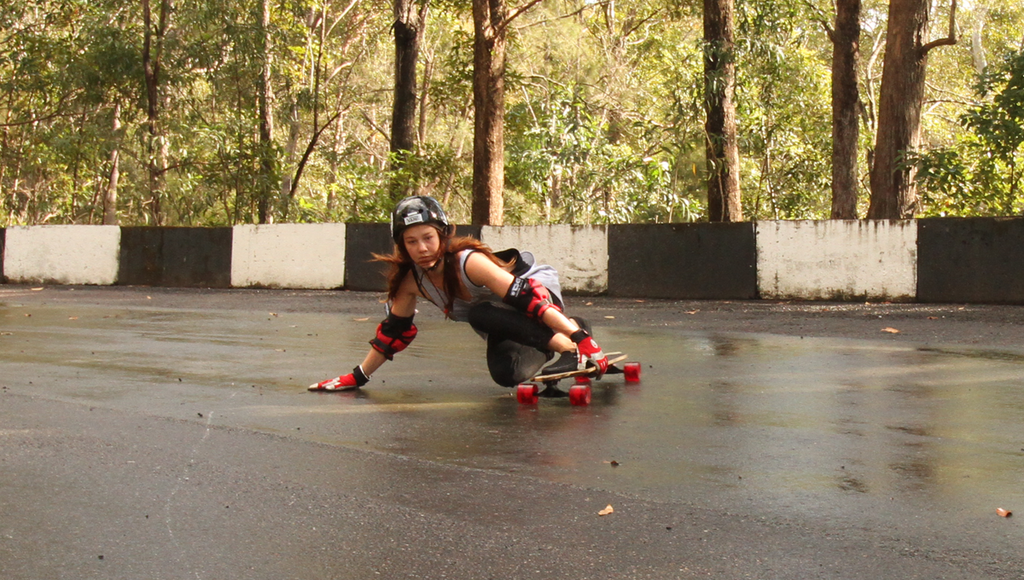 Phoebe shredding it up for the afternoon slide session

As an outsider, I felt privileged to be able to skate a beautiful hill with these ladies.  More than this, I felt amped on the vibe of girls learning totally rad stuff from each other and sharing skills and encouragement in a way that women do well.  Events like this make me feel excited about the ladies scene here in Oz.  Look out boys, this year we’re on the rise! Natalia getting in 1 last run at the Gateway 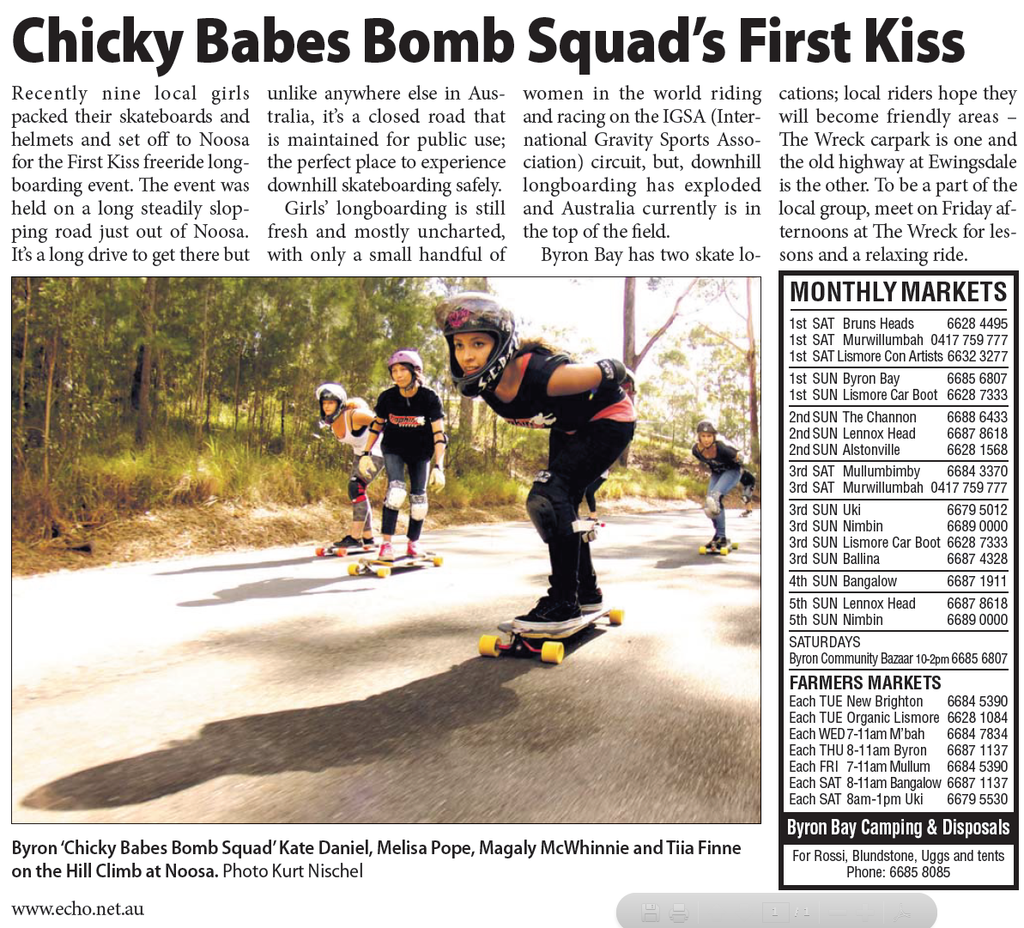 Premium Member Comment by Lea Robbo on July 3, 2011 at 23:54
Girls Shredding!  Yeww.  Thanks to the ladies, the blokes who dressed as ladies, the film crew who loved the ladies, and to Hopkin Skate for all of the support

ASRA Admin Comment by Maga McWhinnie on July 4, 2011 at 0:08
woohoooo...sick what an amazing trip!!! thanks lea for the words...Thanks girls for giving the best of yourselves!

Comment by Bern (Mum) McWhinnie on July 4, 2011 at 18:58
I am sooooo thrilled to see all of you girls doing great things ... from the skating, organising, filming, etc, etc, etc  good on you all, especially my Magaly... Keep it up girls !

Premium Member Comment by Connor Ferguson on July 4, 2011 at 20:15
Are you referring to me in my dress steve?

Awsome girls! Thanks to all supporting Kultcha at the down hill climb Noosa.