All Tied Up in the Capital 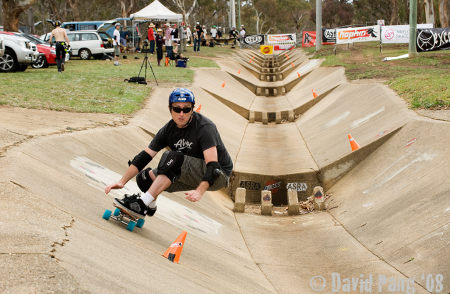 Saturday dawned with flashbacks to Round 1 at the Central Coast - a ditch race washed out and a slalom race in the pouring rain. But a brief carpark slalom session provided a couple of hours for the sun to appear and the ditch to dry out, and it was ON.

The first casualty of the day was drain-master Glenn Mills who twisted his knee in his first practice run and put himself out of action for the weekend. And with Haggy Strom out injured, and Steve Daddow not arriving in Canberra in time for Saturday's race, it was up to others to put pressure on Jackson Shapiera, who won the 2007 Ainslie Ditch Race.

Sean Mussett made the early running and was finally overtaken by Neil Willington's final run, but nobody could beat Jackson's winning run - a total edge-of-control affair. Paul Carey took his favourite spot in the rankings - third.

Apart from the hangovers, the theme of Sunday's head-to-head race was the tightness and difficulty of the course. Everybody had trouble with it, especially Saturday's winner Jackson, who was fast but untidy - he hit at least 10 cones with every run.

But the course was eventually mastered by most, including first-timers like Canberra locals Ross Scutts and Paul Parry. Melbournite Bernie Griffiths ran his own race, carefully picking his way through the cones while his much-faster opponents DQ'ed.

Throughout everything it was Steve Daddow who looked the man to beat, with fast times on every run. Jackson Shapiera lost to Paul Shaddock and then lost again to Nathan Paff, and these two then had to race each other, with Paul Shaddock victorious by less than a tenth of a second, giving him third place at worst, and a shot against Paul Carey to see who would meet Steve in the final. This was another close race, with Paul Shaddock bowing out, but getting his first ever podium placing.

The final promised a lot, and Steve Daddow layed down one of his fastest times of the day. Paul Carey uncharacteristically lost his composure and blew out of the course, handing Steve the victory and setting up a thrilling showdown at Race 5 between himself and Jackson. 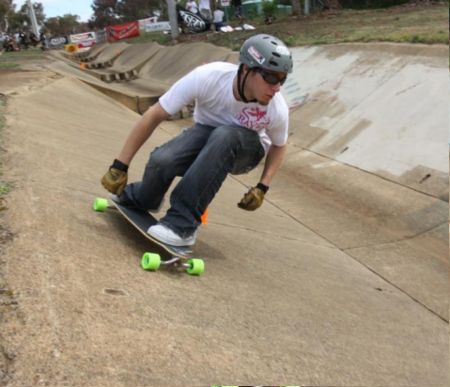 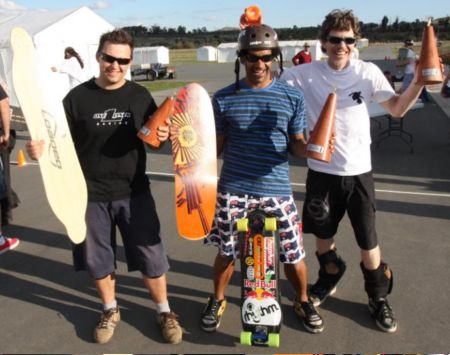 Note that only the best 4 results will count in the final standings, so there's going to be some big changes after the final race! Comment by DrBill on October 7, 2008 at 7:11
How rad is Sean Musset? Did I see 6 out of 10 names on the ditch race results were Men of Naccos. Naccosians are prominent out of all proportion in more ways than one (twisted emoticon).

Comment by DrBill on October 7, 2008 at 7:12
Abd many thanks to Haggy for his tireless, selfless, infallibly accurate work at the timing desk (thump up emoticon).

Thanks for all the Hospitality and Stoke on the weekend, so many names now have faces. A total Blast

ASRA Admin Comment by bernie on October 7, 2008 at 13:07
Thanks to all for putting on such a great event....and series.
and thanks for the special mention.
(How good is that Bradbury method !!!!!)

Comment by Shadow on October 7, 2008 at 21:03
Great weekend! Both Saturday and Sunday's tracks were wild rides! Good to finally ride a long tight slalom track something the Conehead Cup has been missing, well done Bugs. Thanks to CROSS for putting on another wicked event, you guys kill it every year. Big thanks to the ASRA gents who are always doing the back ground work, with out you guys days like this would just not happen.
The report on Millsy's knee seems good, spoke to him today and he was walking well.

Comment by Gus on October 7, 2008 at 22:01
To me it was more than that a Great weekend! Saturday for me was a eye opener,i just could not get it happening in the ditch,the sunday was incredible after staying on the side line on saturday ,sunday i had to give it a go but it was also a good learning curve for me but it was great.I also like to thank CROSS for the great event and weekend anda big thanks to ASRA.Also i like to thank Greg,Haggy,Bugs and the rest of the boys that helped me on the weekend.Bring the next one on.

ASRA Admin Comment by Bugs on October 7, 2008 at 22:03
Yay Shadow, you rocked on Sunday - 3rd place and ran the cleanest runs of the day. Millsy, hope you're up and about - weird shaped knee you had on Saturday.

Comment by Brad NS on October 8, 2008 at 1:10
Thanks too everyone who made it such a great weekend ASRA , CROSS and all the there familys .. see you all in november NACCOS