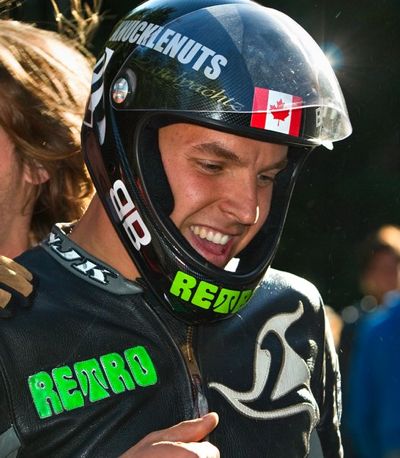 Kogelberg, South Africa- Mischo Erban has clinched the 2009 IGSA World Cup Series Championship by winning Hot Heels Africa. His dominating win put an exclimation mark on his year where he showed he could consistently qualify fast and finish on or near the top of the podium at almost every event. After severely spraining his ankle last weekend at the Howteq National event, it was questionable all week if Mischo would even be able to compete at Kogelberg. Mischo showed the true make up of a Champion by overcoming adversity and not simply just competing, but by going out and winning Hot Heels Africa.
Mischo started the year with a dominating performance at the Vernon Downhill to earn the IGSA North American Champion crown. At the eight 2009 World Cup events Mischo had three wins in England, Brazil and South Africa. He also finished second in France along with a fourth place finish at Peyragudes (France) and a fifth at Maryhill (USA) . No other skater was able to win more than once.

The organisers suspected that the Hot Heels track would have something new to throw at them this year. The baboons did not put in an appearance at all, but after a forecast of clear skies, 30° temperatures and strong winds, we awoke to rain and a “black” South-Easterly, with the track soaking wet!

The organisers retreated to breakfast at the Hangklip Hotel and after perusing “wind guru’, which predicted an end to the rain and an increase in the wind, all moved up to the track which was already nearly dry. “Black” South-Easterly winds produces gale-force gusts and the mountainous terrain means that these swirl unpredictably. The wind was whipping up white horses and clouds of spume on the Buffelstal dam, and blowing hay-bales onto the track.

It also put paid to ideas of showing DVDs and videos to spectators on the Red Bull big screen, which could not be erected. Practice runs started late again! The arrival of lots more spectators than expected caused a few headaches, as there is limited parking and access at the Hot Heels track. As usual, a plan was made, the Sector 9 van was commandeered as a spectator shuttle and all settled in for an exciting day’s racing.

The racing got off to a protracted start, with a crash in the second street luge GP heat, when Glen Phillips sustained an injury to his fingers, shed quite a lot of blood on the track, and had to be taken to hospital. He is home tonight, but will need surgery on the hand tomorrow. Thereafter street and classic luge GP starts interspersed with downhill skateboard heats and all ran smoothly. The Mitsubishi shuttle did its’ usual impressively efficient rider transport.

The heats ran pretty much as predicted by the qualifiers, with Mischo and Scoot making their way to the final, along with Mike Zietsman and Oliver Nielsen. Richard Dweza confirmed his qualifying time with a place in the Consolation Final, along with number six qualifier Stephan Ruefli. Olivier Bareaud used his international race experience to beat the number seven qualifier Guilherm Neto from Brazil. Ben Malherbe confirmed the excellent form he had been showing in the practice runs by making it to the Consolation Final, despite qualifying 16th.

The conditions were wild and extremely challenging with strong gusting head winds down the straight and uphill past the dam, changing suddenly at Baboon Bend to a tail-wind, (which put paid to all drafting tactics down the final straight), with a few exciting cross-drafts to contend with in the little S-bend near the gate before the final straight.

In the final, Zietsman did his usual fast start, while Mischo was pushing mongo to prevent damage to his injured ankle, and took third behind Nielson. Scoot was holding back in fourth place. Zietsman was first coming into Lloyd’s Left, but then air-braked quite hard, and the other three riders shot past him.

Mischo brushed the bales with his knee coming out of Lloyds, however he recovered and flew into the lead down the straight. The other three were trying to stay close enough to draft him in the strong head wind. Zietsman took advantage of the draft from the three other riders to shoot past Scoot and Nielson on the uphill but he could not catch Mischo going into Baboon Bend. This was the same place that Mischo had passed him several times last year!

Erban then had a tail-wind all the way to the finish,leaving no possibility of drafting tactics for the following riders. There were several anxious moments for Zietsman and Scoot in the side-winds near the gate, when both were nearly blown off the course as they battled for second place. Nielson was still sitting back in fourth prepared to capitalize on any misfortune that might occur.

Mischo came charging down to the finish with the tail-wind behind him to take the Hot Heels Africa and 2009 IGSA World Cup Series titles, in a well-deserved and popular win. Zietsman managed to stay ahead of Scoot down the straight to finish second. Nielson finished fourth in his first World Cup final after making the Consi at Eastbourne. The top riders seemed to revel in the challenges presented by the wild conditions and came out of the race totally stoked

The Consolation Final saw an ecstatic Richard Dweza take first, with Stephan Ruefli second, true to their qualifying times. Olivier Bareaud finished in third, while Ben Malherbe fell at Lloyds and did not finish. 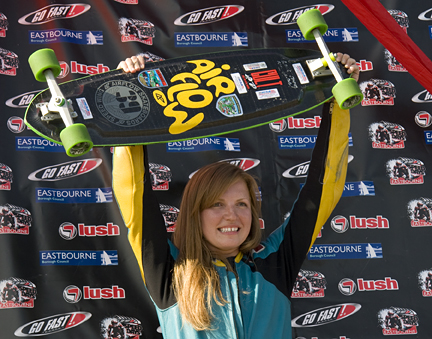 Dasha Kornienko was declared the winner of Women's Downhill Skateboarding. Her victory means that she clinches the 2009 IGSA Women's Downhill Skateboarding World Cup Series Championship over Rebekka Gemperle. Rebekka decided she could not risk re-injuring her already broken wrist in the treacherous conditions, so no race was run. Dasha Kornienko was awarded the Women’s prize and earned first place points for her victory. Gemperle was awarded second place based on her qualifying performance. Their presence and example has inspired many potential local women riders and there are already plans for a women’s race at Hot Heels next year.


The ranks of the Street Lugers and Classic Lugers were thinned by 33% with the injury to Glen Phillips, and only two riders took part in each of these divisions. Both races were won by Russell Naude. Brian Isham finished second in Street Luge and Andreas Johnsen in the Classic Luge. There were a bunch of new riders at the race, and the non-racing entry option proved popular, with the non-racers doing timed 4-man runs after the qualifiers to get a feel for racing. There were many very broad smiles among this group after these runs. New Project skateboard decks were awarded to Raoul van den Berg as the most promising new rider and Ben Malherbe as the most improved rider respectively.

Premium Member Comment by Fitz on December 14, 2009 at 22:09
Congrats Mischo!
He's been trying so hard for yrs and all the effort finally paid off.
His first World Series Championship! Well earned. If he's lucky enough to go without injury I reckon he could easily do it again next year.