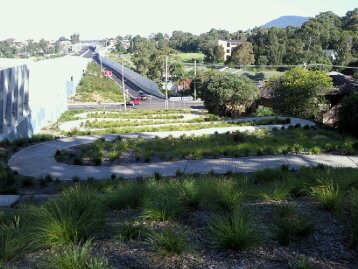 Deep in the backwaters of Woonoona, a South Coast local happened upon a tight, twisty, pathy nirvana. The grom-friendly concrete was perfect for a fun race and Tim Day decided to make it happen, drumming up support and setting a date.

After a postponement due to rain, the race was rescheduled for a few weeks later. Stoke grew as the date approached, with more and more crew clicking that attending button. The 26th came and with it a clear, still day, unseasonably warm (big ups to climate change) and barely a cloud. Many skaters rocked up early, getting in some practice on the eight successive hairpins. Finally, Tim managed to marshal some semblance of order and got registration going, with techno-wiz Bugs on hand to make up a spreadsheet draw. Dividing into separate groups it became a round robin - each skater racing the other eleven in their category. There was a grand sum of one hundred and thirty five competitive head-to-head races over the day, not counting the shittonne of fun runs, butt boards and general shredding that was going on. With starts limited to a single push, the two man heats were often too close for comfort in the first corner. 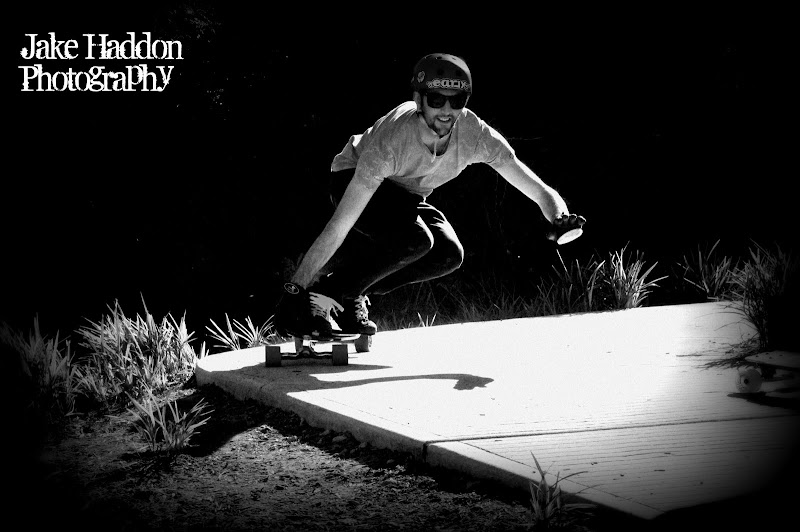 Tim Day, railing and enjoying it.

The combination of concrete dust, wood mulch and dirt strewn across the pathway, there was not a single racer who didn’t crash off that first tight little left-right. A huge mix of predrifting and stand-ups, footbraking and no braking, made for a great variety of cornering techniques. People were tumbling off the path left, right and centre in a mad scramble to beat each other to the bottom. An easy landing into mulch meant that they kept coming back for more. The Bradbury Technique, of letting your opponent go ahead and easily passing when he/she crashed, proved a favourite and won many races. The narrow path, the twisting corners and the easy slope meant for close riding, many groms keeping up with or outpacing more experienced riders. The stupid levels of crashing kept the waiting skaters entertained, and Mason Thompson one of the biggest crashes by highsiding backwards straight off a corner. Tim, Steve Avasalu and Shaun Robinson were on radio duty, sending results up to the man at the laptop. 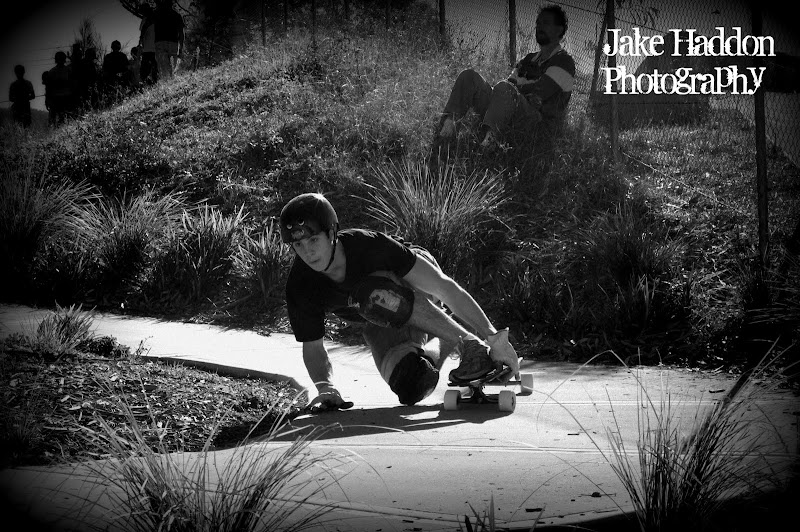 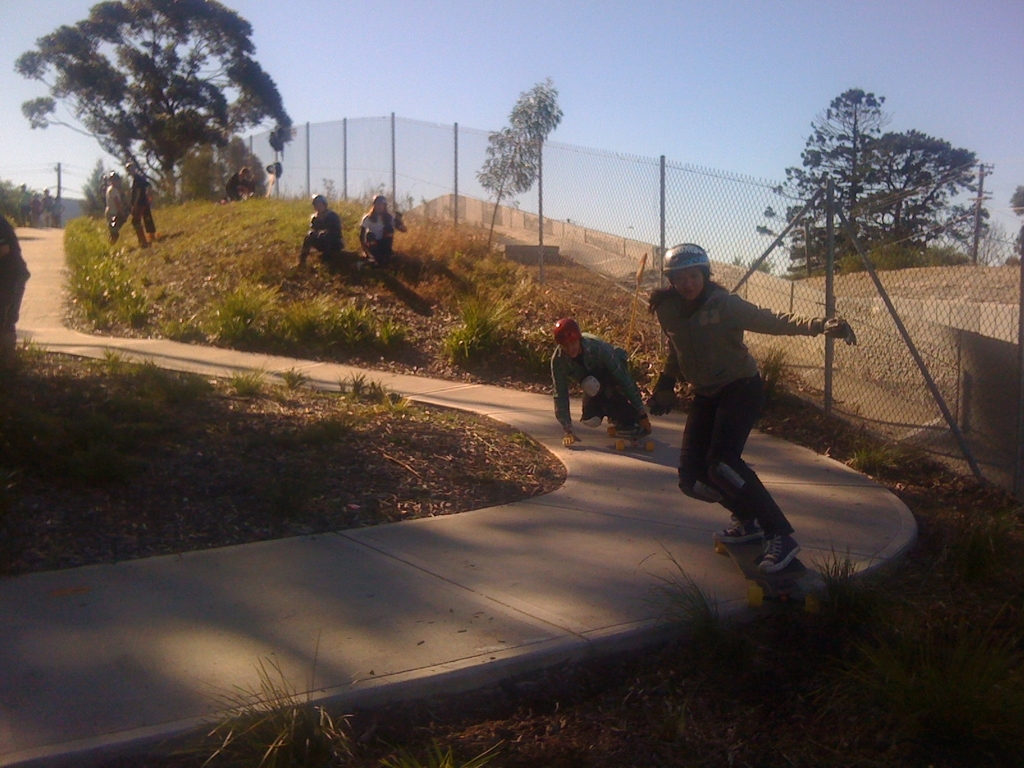 Standouts after the first round of racing were Adam Gale, who only lost a single race all day, as well as Alex Groth, Dean Meurer and Josh Musumeci, each winning nine out of a possible eleven. The first semi-final, between Alex Groth and myself, was won by a clear margin. I crashed out on the first corner and Alex proved uncatchable as I pushed and crashed out again. Adam Gale and Dean Meurer were the next semi, where Adam struck an early lead and held it to the finish. That meant a final of Adam and Alex but first the consolation, where I beat Dean to the first corner and luckily held it to the bottom. Adam again proved his path dominance and outstripped Alex round the first few corners, fending off his pass attempts to beat him to the finish and take out first place. After a quick presentation and a ten man final mob down the path, complete with early grabs, dirt runs and of course more crashing, everyone loaded up and headed to a nearby slide hill. 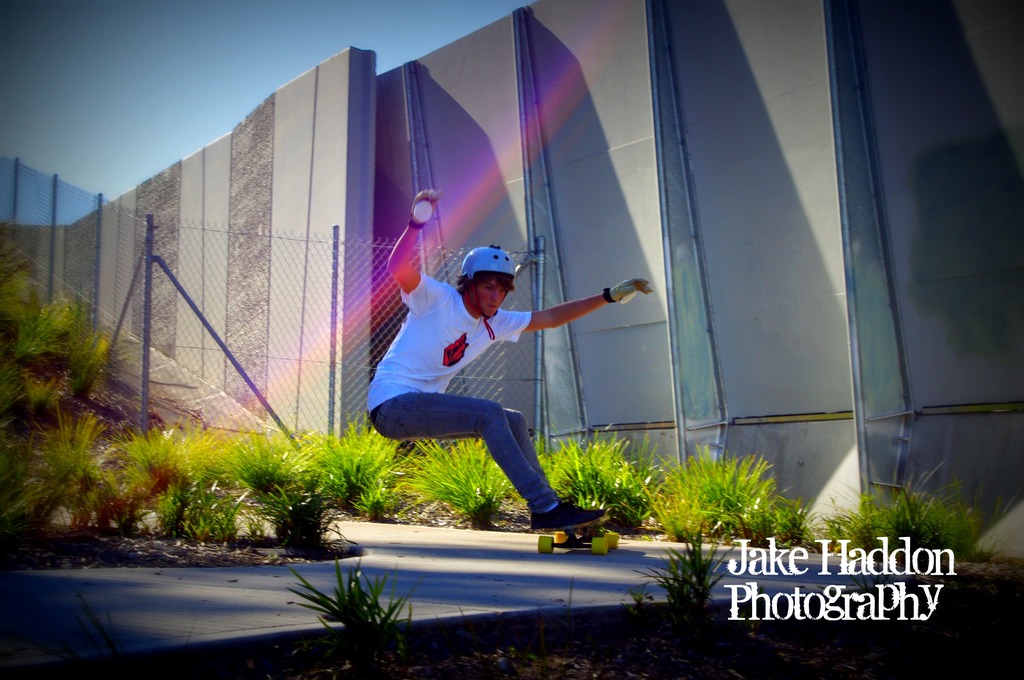 Author, really not wanting to hit that fence. 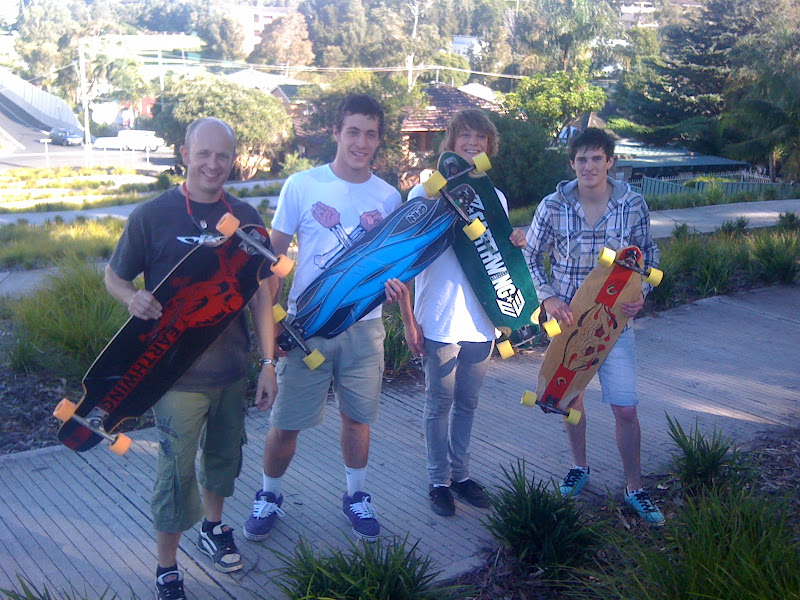 Somehow, crew found the strength to keep shredding, stretching their tired legs up the steep hill to throw big stand-ups, sit-downs and every slide imaginable back down. Tim, who had been busy organising all day, started throwing out huge, fast checks and set up a scramble as everyone fed off each others energy. Caspian Baska showed off a mean steeze and Dejan Djukic threw down some gold, nailing the heaviest crash of the day. Josh Musumeci impressed, switching between regular and goofy like nobodies business. Justin Abrioux (who unfortunately missed out on the race) destroyed on his chopped deck busting out longer, faster slides than anyone else. 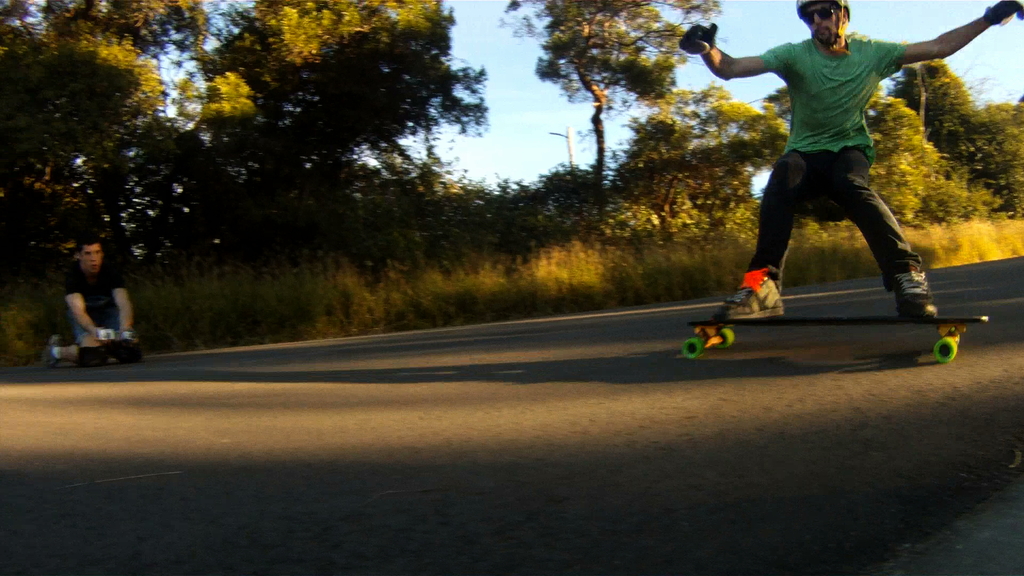 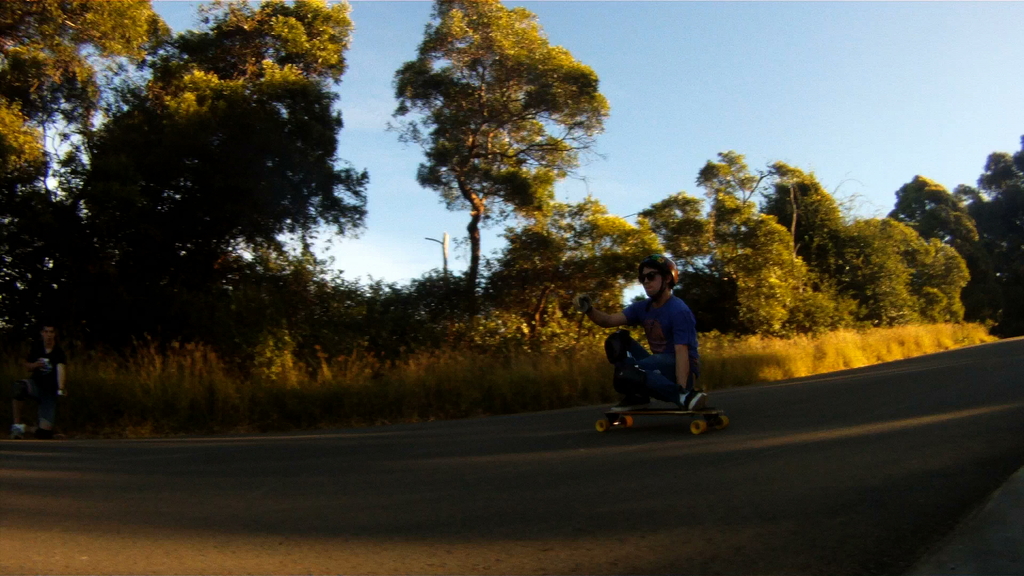 Big thanks to all the organisers and champions who set it up - Tim Day, Steve Avasalu, Shaun Robinson and Bugs. They did a great job of putting on a super fun day and getting all the South Coast (plus others) crew together for some path racing. Ideas have been thrown around for round two in a few months, and I know I’d be down. Thanks also to the photographers, Jake Haddon and Bruce de Graaf, as well as everyone who made it an enjoyable day.

Premium Member Comment by Ted Dwyer on June 29, 2011 at 20:53
Unnamed canadian guy's name is actually Justin abrioux.
Sick write up! Wish I could've made it.

as you mention...the bradbury technique... didn't always work but it was always great fun!!

I look forward to skating it again soon.

haha way better than i could ever do!