Canberra or Bust - the whole story 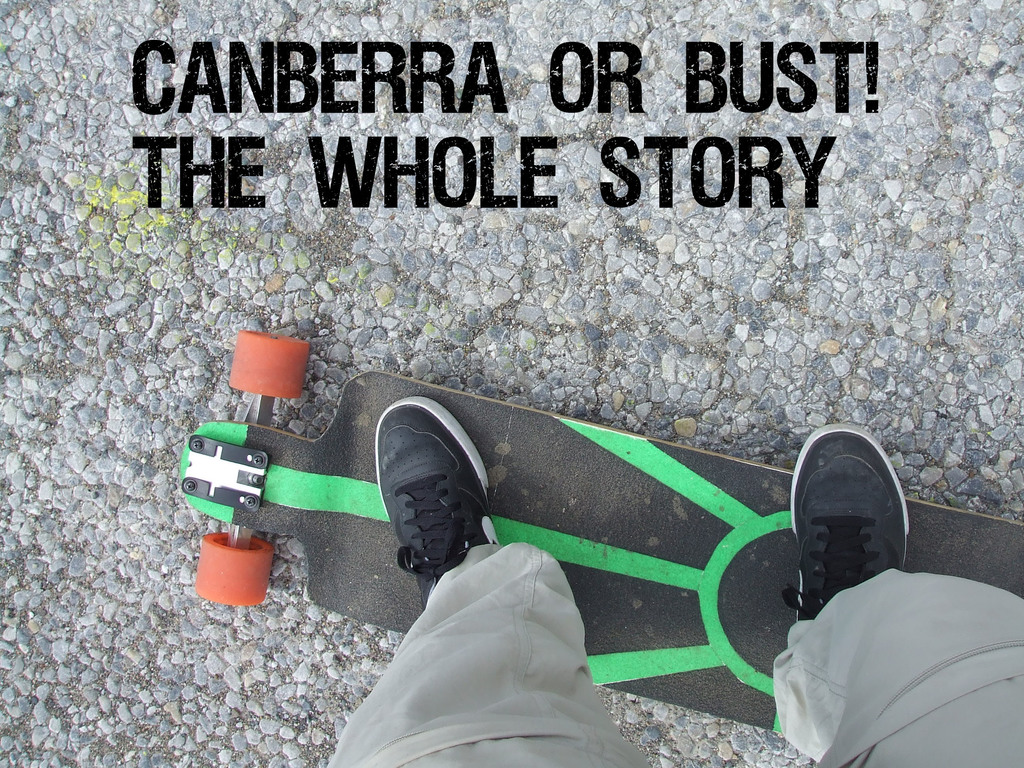 So... people have been asking. How was your skate trip to Canberra? Was it fun? Was it horrible?

And, depending on my mood at any particular time, I have replied in any number of ways:
- It was awesome. - It sucked rotten eggs. - I felt like a superhero - Next time I’m doing it on a motorised skateboard.
- There’s nothing like the sensation of a semi-trailer passing you going 120k at 8am to wake you up.
- It was great except I had to listen to Trav’s detailed account of his crotch chafing for three days.
- Next time I’m doing it with a girl – she’ll look better than Trav from behind.
- There will be no next time.


In any case, here is a little rundown of our four days on the road – adventures, misadventures... when you’re on the road you pack a lot of life into one day. It was a reminder of how life ought to be lived. And for that alone, the trip was well worth it. Trav was heaps excited about this tree. Hmm, ok dude. I agree, it’s nice and green, but it’s just a tree... 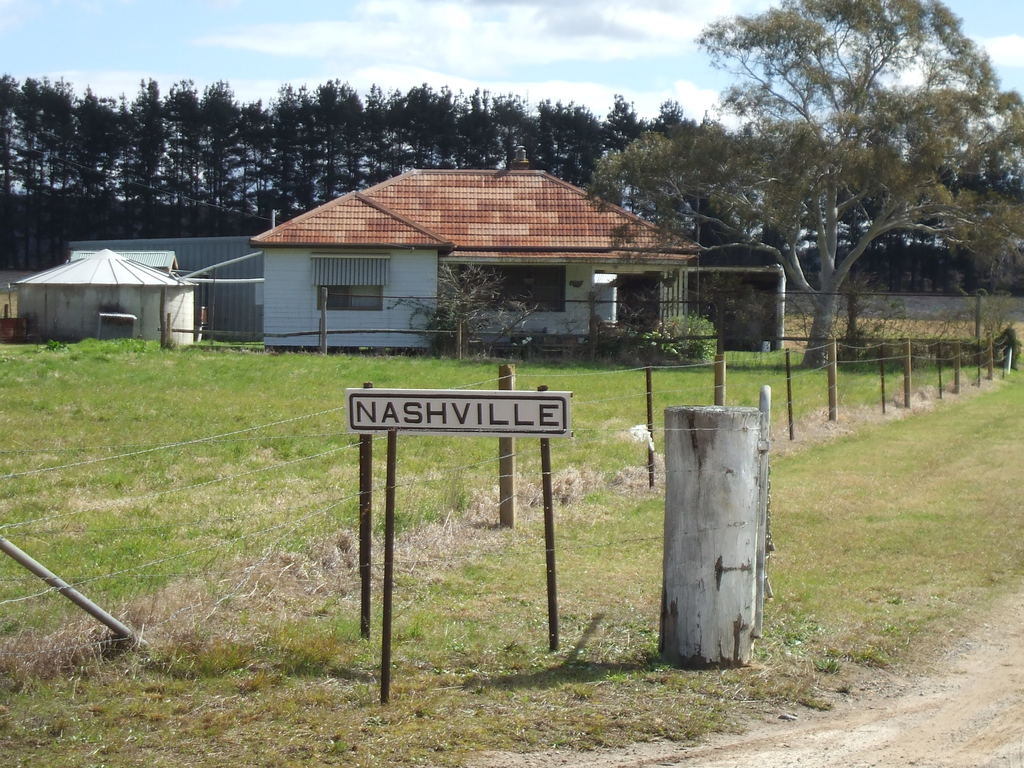 Myths and legends tend to swirl around certain celebrities. Elvis, James Dean, Michael Jackson, etc. Another one of those people who seem to attract more than their fair share of tall tales is Johnny Cash, the archetypal American country singer. Or was he? Because according to my investigations, Mr Cash is actually an Aussie transplant to the US, sorta like Hoges, minus the tax problems. And this is where he grew up... Hard to believe, aint it? 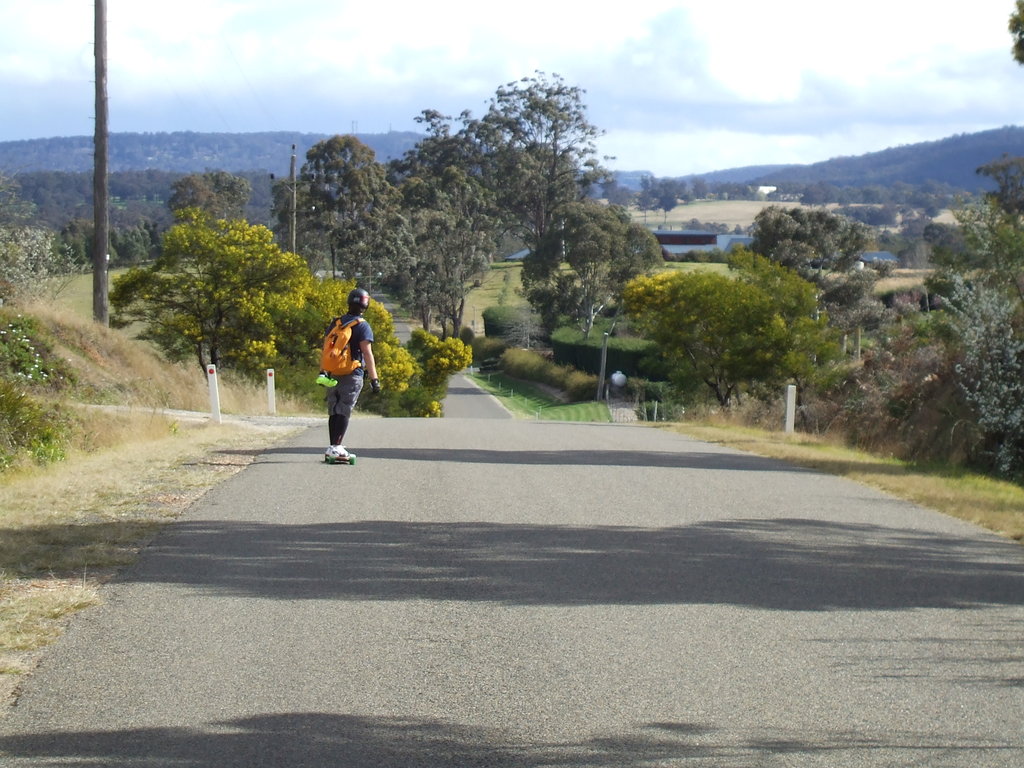 Views like this really lift your spirits when you’ve been ploughing through rough stuff for 5 hours. End of the first day - Moss Vale. After skating for 9 hours Trav didn’t even get a chance to have a sip of his beer before he passed out!


One of the greatest discoveries of the trip was how awesome skate paddles are. Here's how youmake a skate paddle while on the road:
1. Find a stick/branch/pole
2. Find a piece of tyre 3. Wrap said piece of tyre around end of stick and apply gaff tape
4. Paddle away, singing “O sole mio” 
When we finally got to Goulburn I was pumped to eat some Thai food. I told Trav “Dude – we’re going out for Thai tonight!” Trav looked at me with a mix of surprise and horror on his face, before finally blurting out “But I have nothing to wear!” An hour later and a trip to Vinnies and Rivers, Trav felt suitably dressed for a night out in Goulburn. 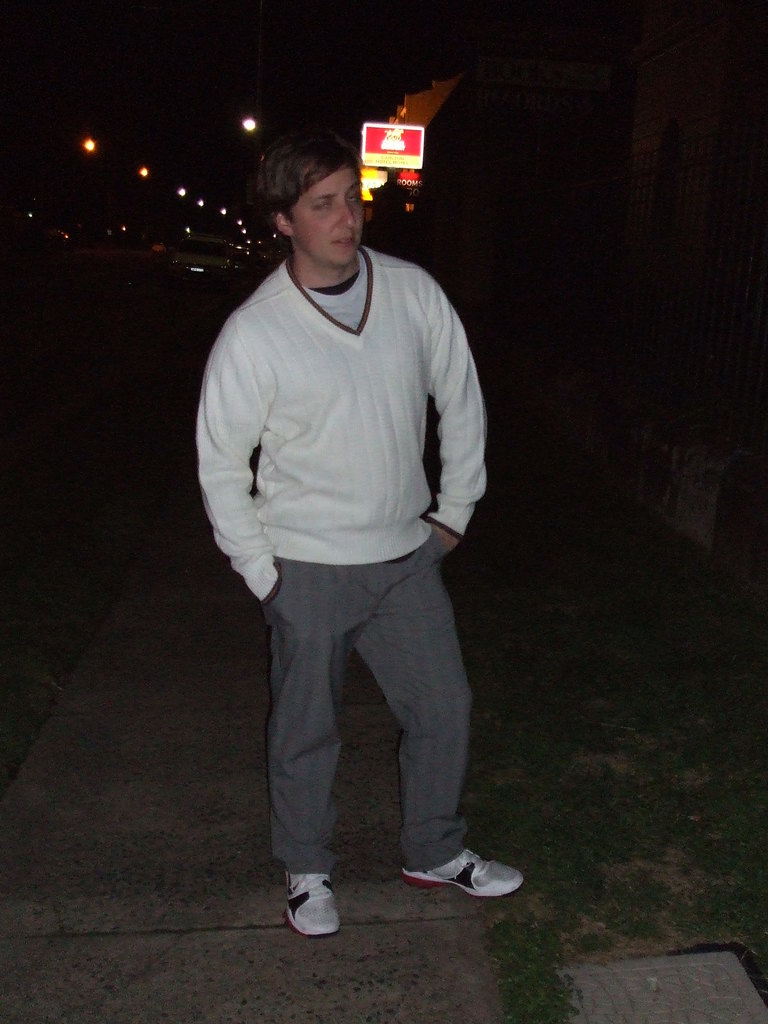 Dressed to the nines! Living up to his reputation of the night before, our intrepid metrosexual is relentless in his pursuit of the goal – a muscular hairless chest! Wait no, I mean Canberra!! 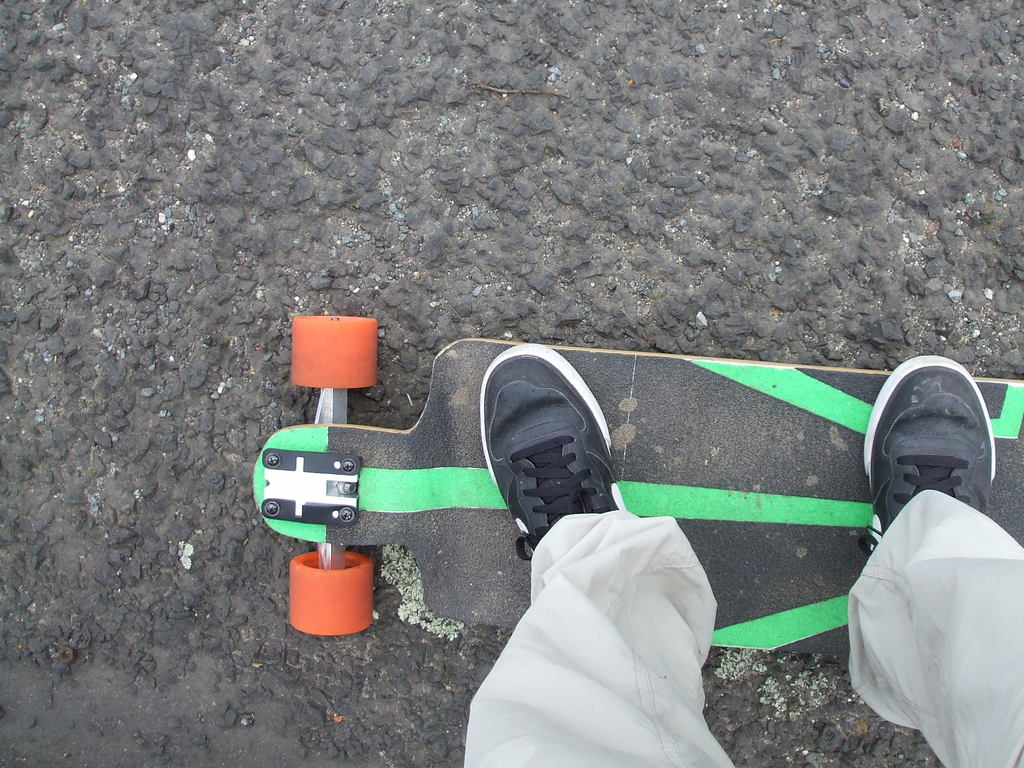 It's not all fun and games, champagne and magic tricks, on the big open road. No siree! It's a lot of pushing on stuff like this... 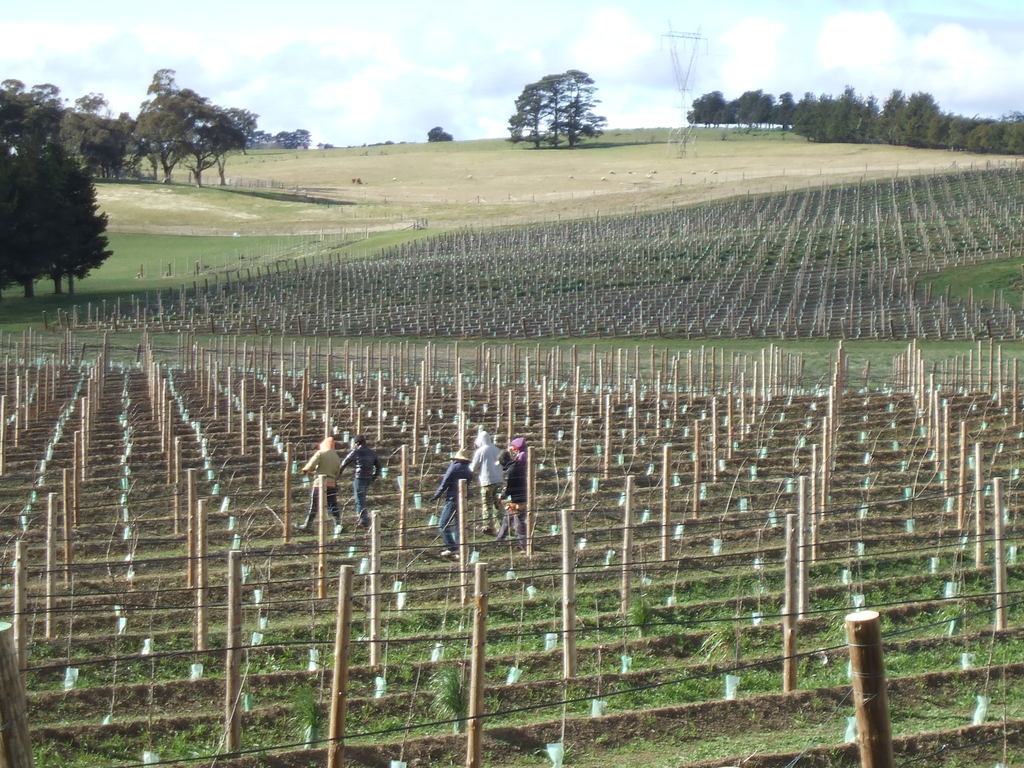 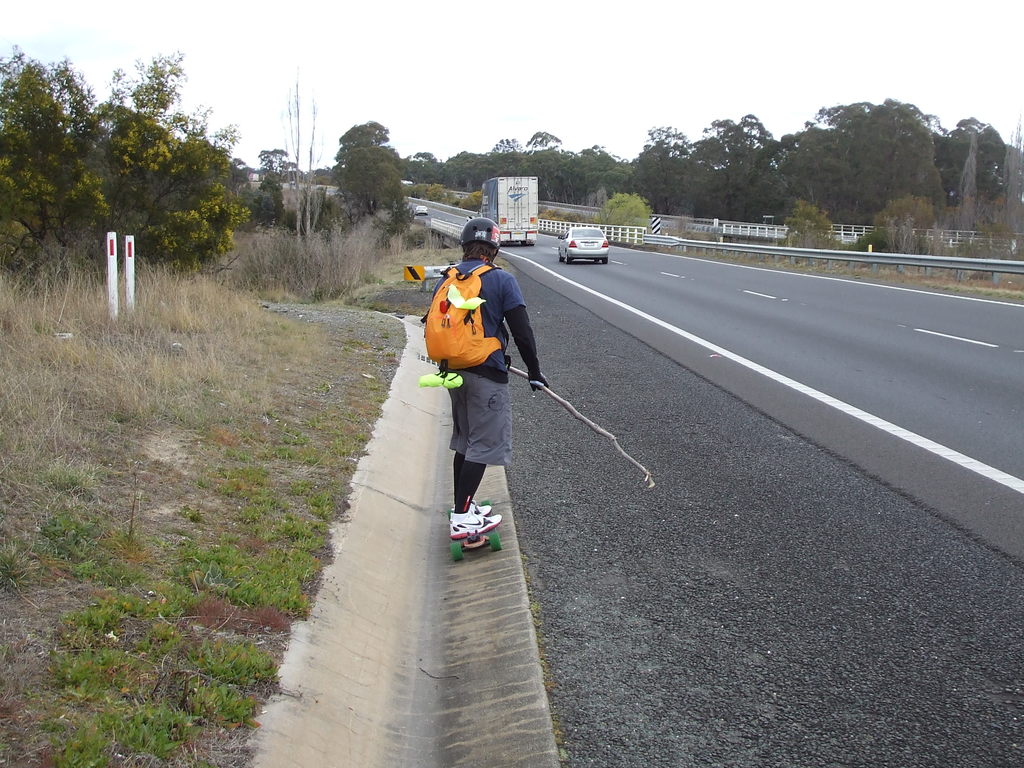 Life in the Gutter. When the choice is between a butter-smooth, but super busy highway, and a rough-as-guts shoulder, you go for the gutter. The gutters were life-savers at times, providing much-needed relief from the chattery shoulder. 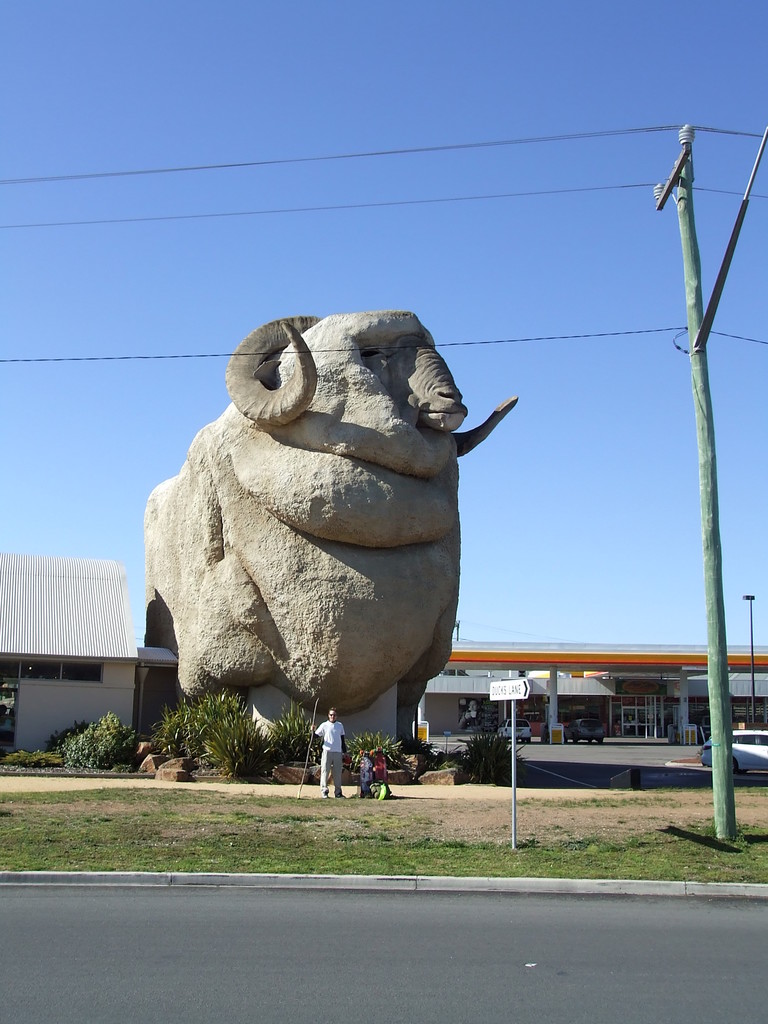 The US generally prides itself on being the biggest and bestest at everything. But here in Oz we have at least one thing up on them - the biggest sheep in the world, by far. Take that, USA! 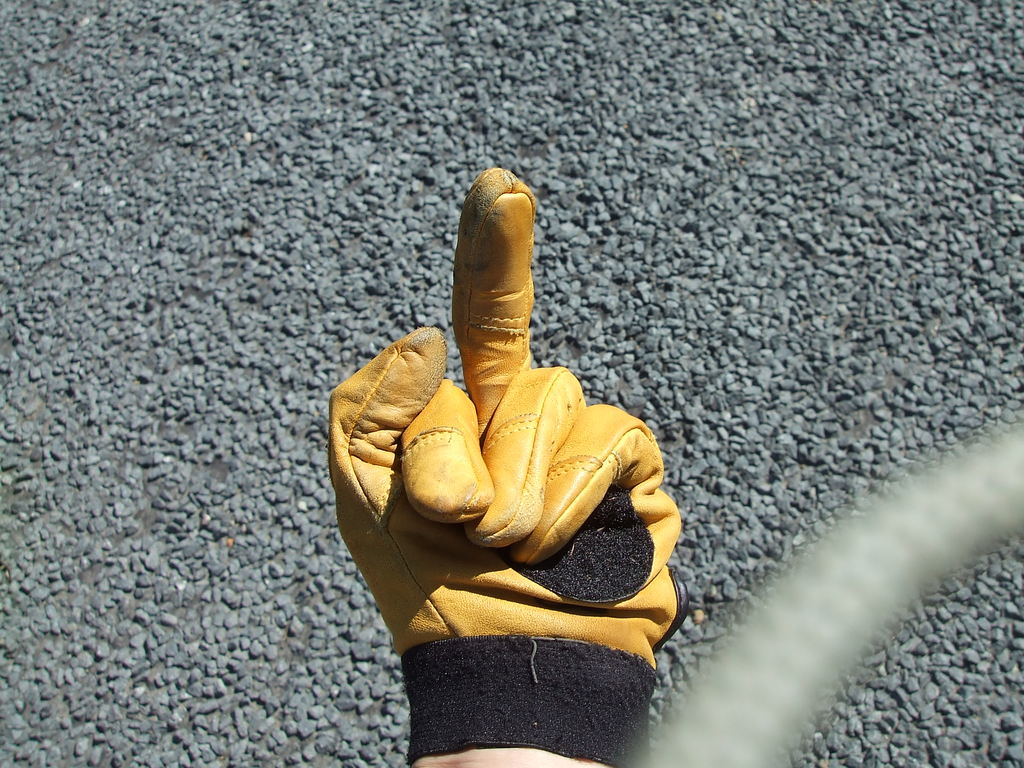 The author demonstrates his feelings towards a lousy section of road. 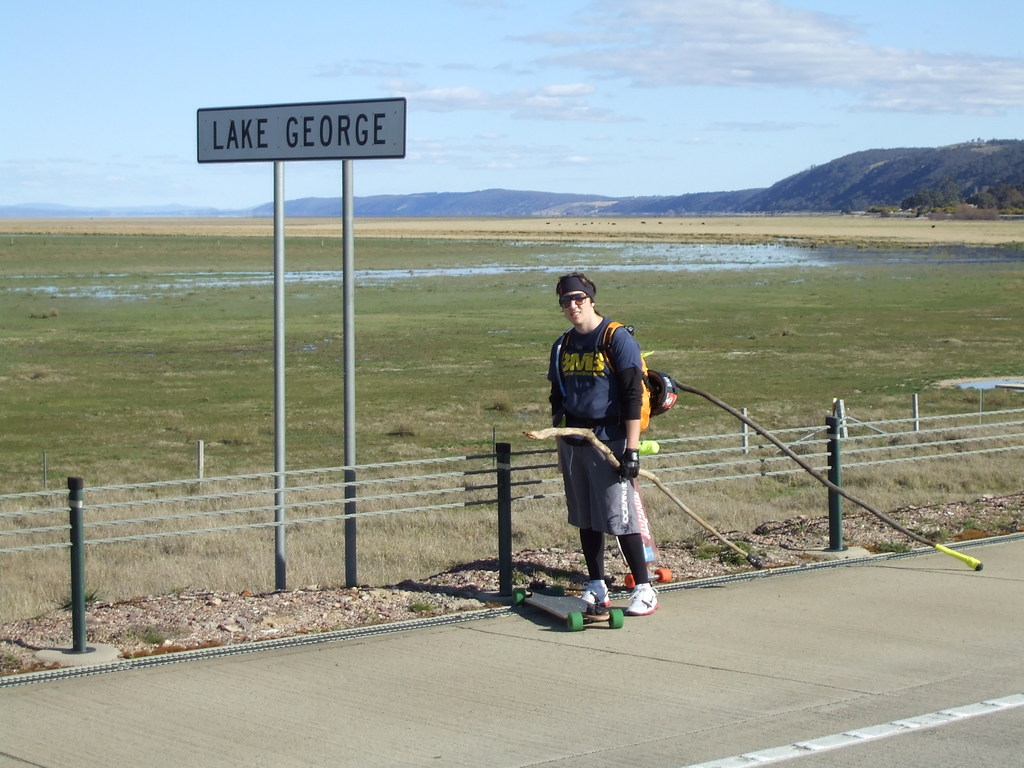 The first time I drove to Canberra I read this sign with a fair amount of confusion. “Lake George? Where the hell is the lake!” Nevermind, there is a very big lawn instead, which is just as nice as a lake anyhow. 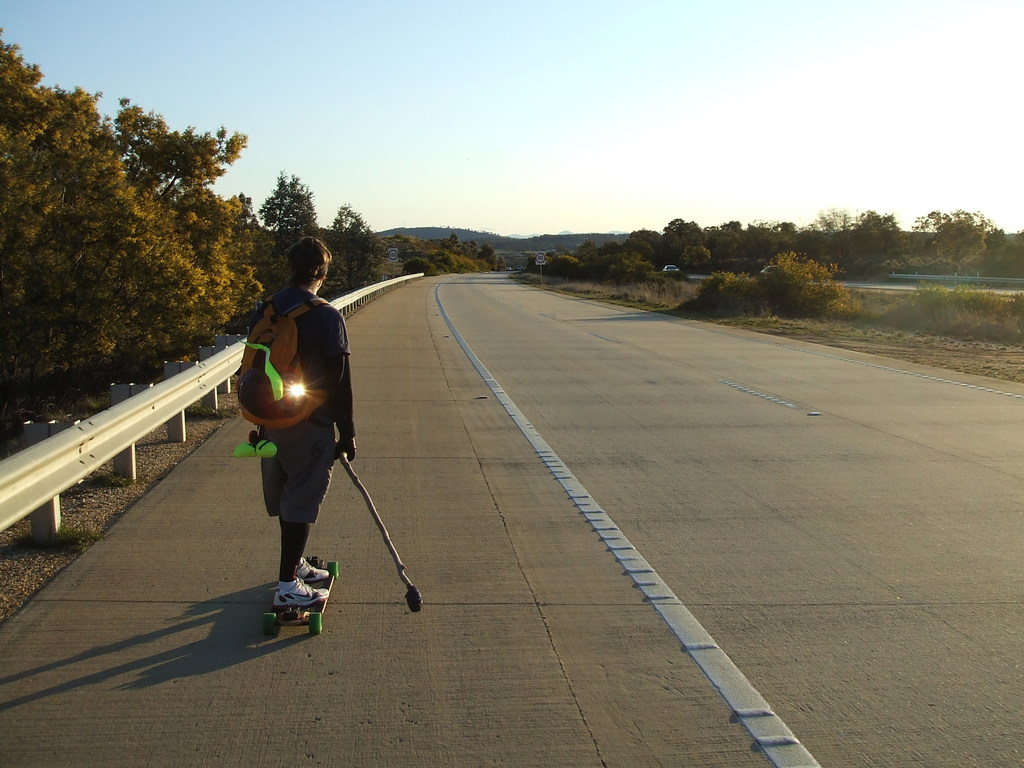 What it's all about. A beautiful slab of smooth road, rolling towards the setting sun. How low can you go... Trav’s long-distance rig. Haggy and his flock. When not on the road with this skate paddle, haggy has a second career as sheep-herder. The last push - up to Parliament House. 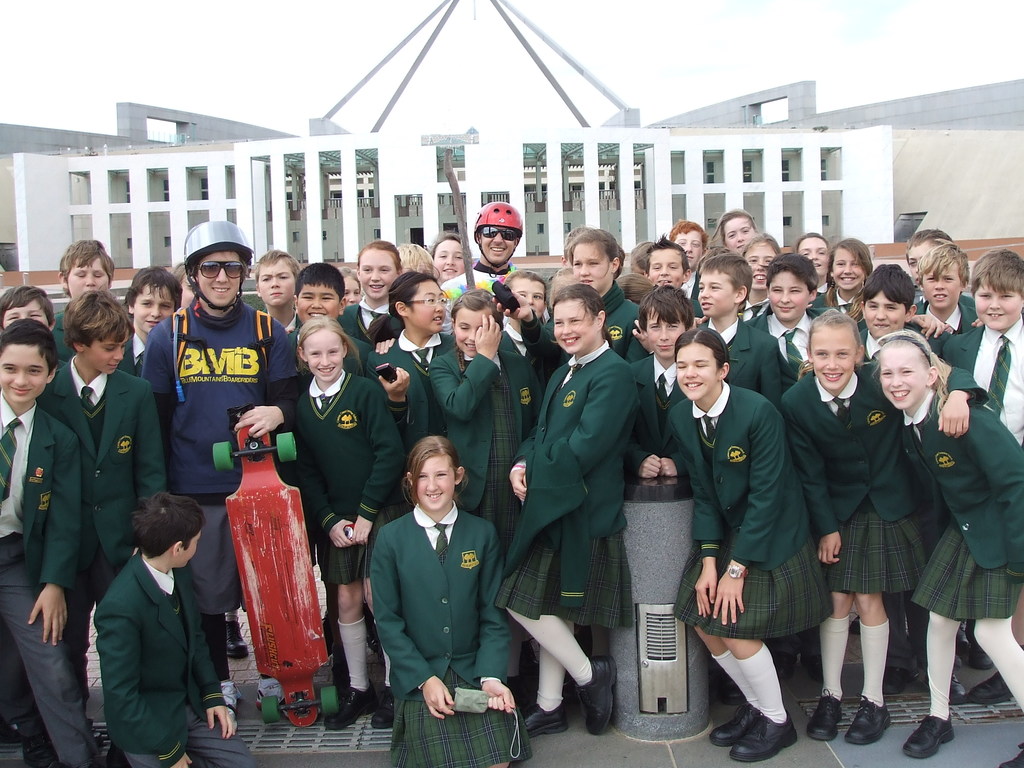 Arrival in Canberra! These kids from the Central Coast had passed us on the highway two days earlier. We signed autographs and were mobbed like the rockstars we are! 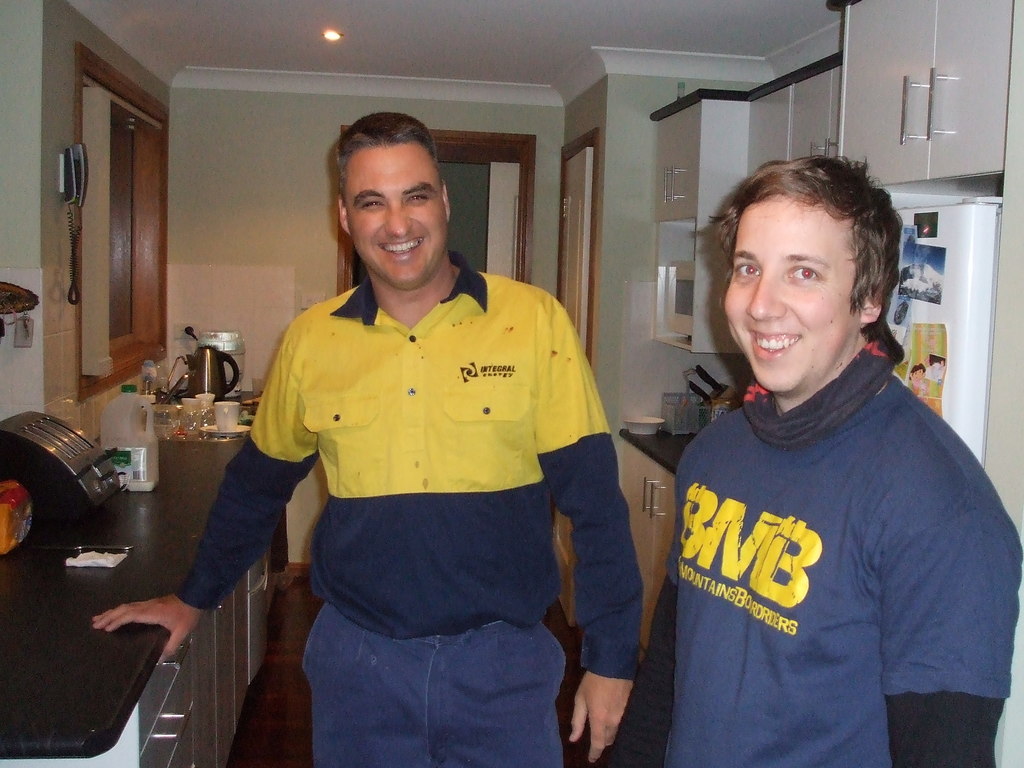 Simon and his awesome family for putting us up for the night. I'll forgive you guys for sending us through the ghetto. 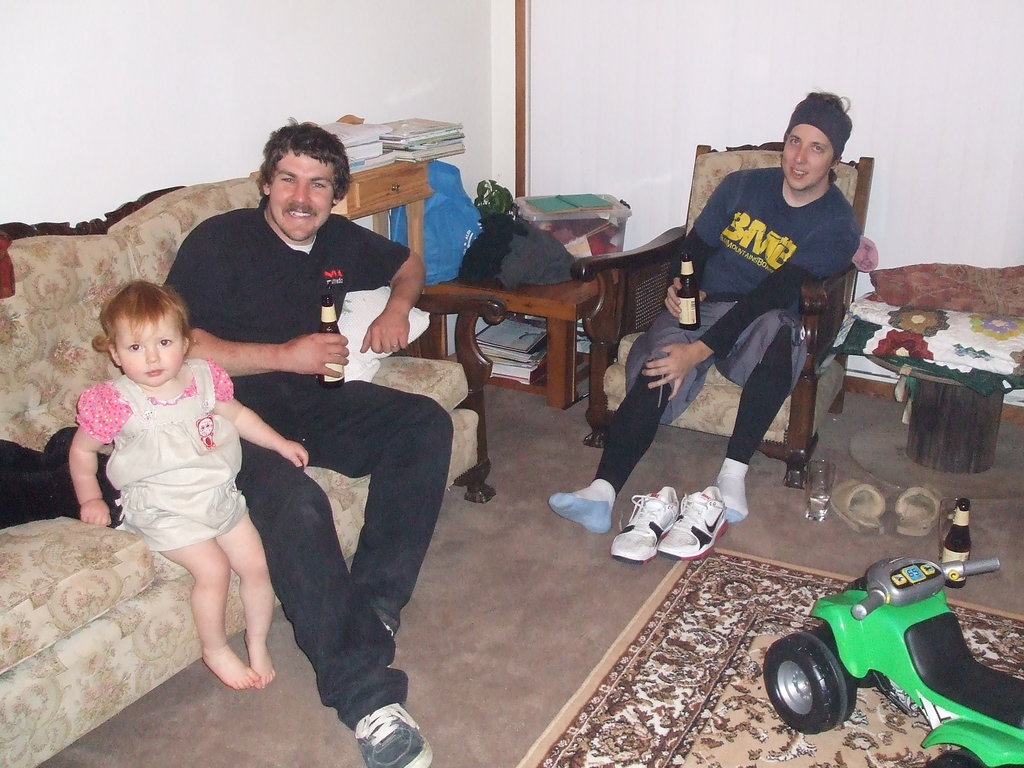 Henry and your awesome family for a very restful night. Tuli, I'm coming over for schnitzel again soon! 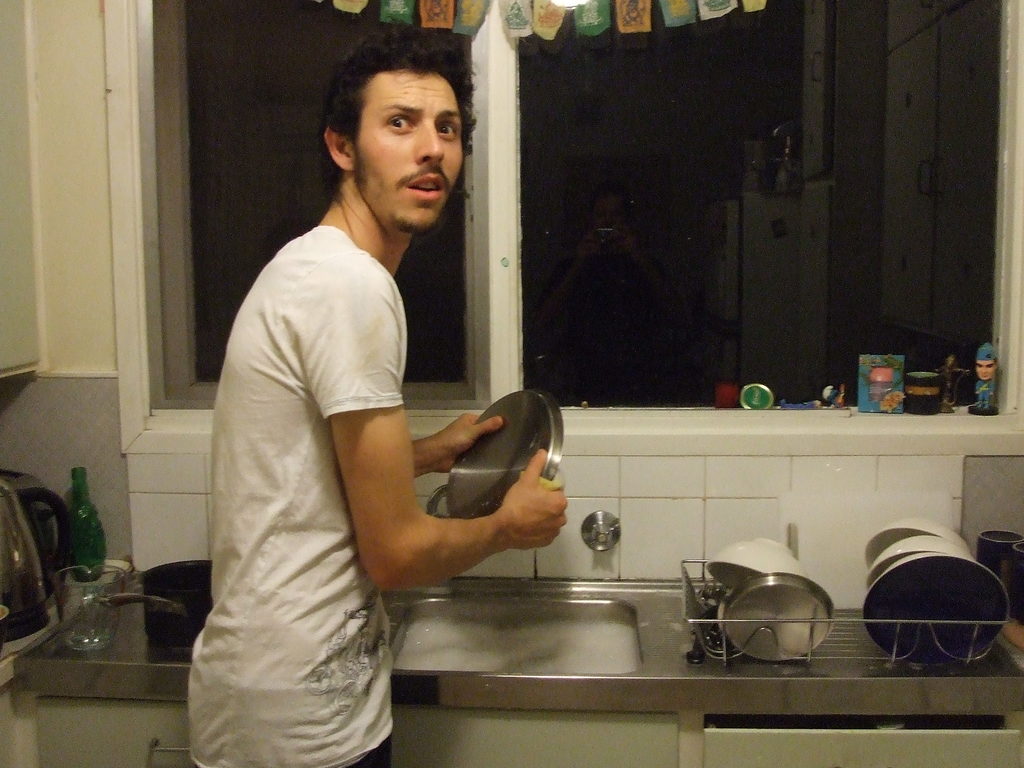 Browen - always a champ. Not only does he do dishes, he also lends out his boards to happy interstaters! And Haley - your chilli is supreme! 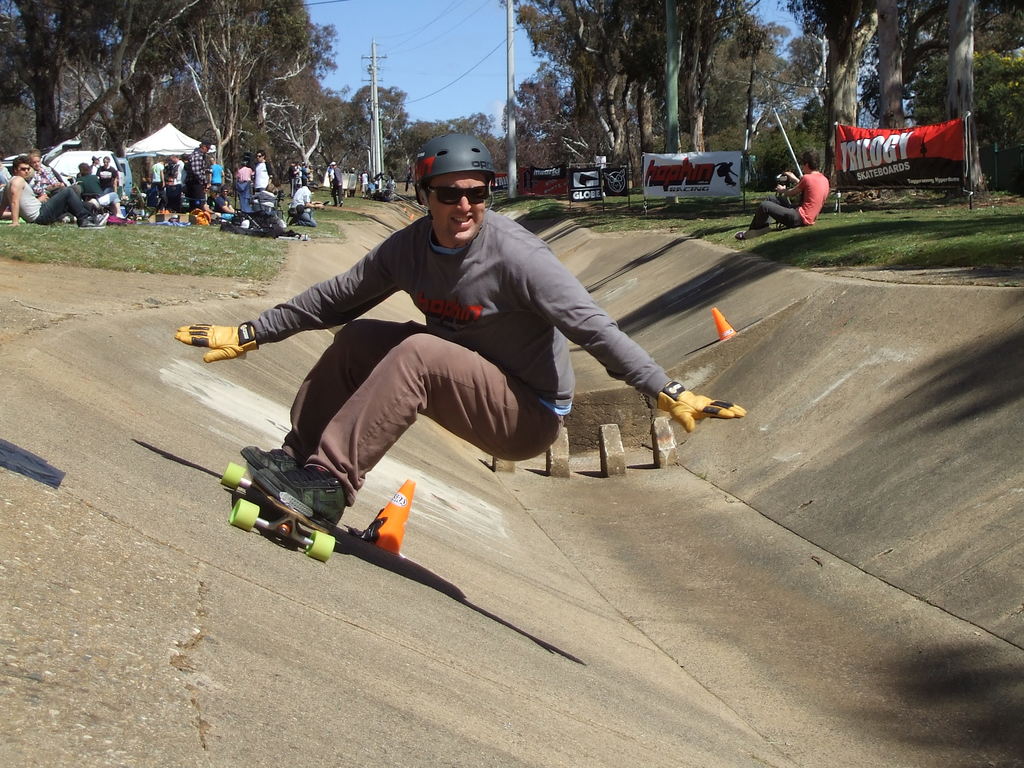 Robbo for lending me the most awesome rig in history.


The HOPSHOP for bearings, bolts, bushings, and much support. 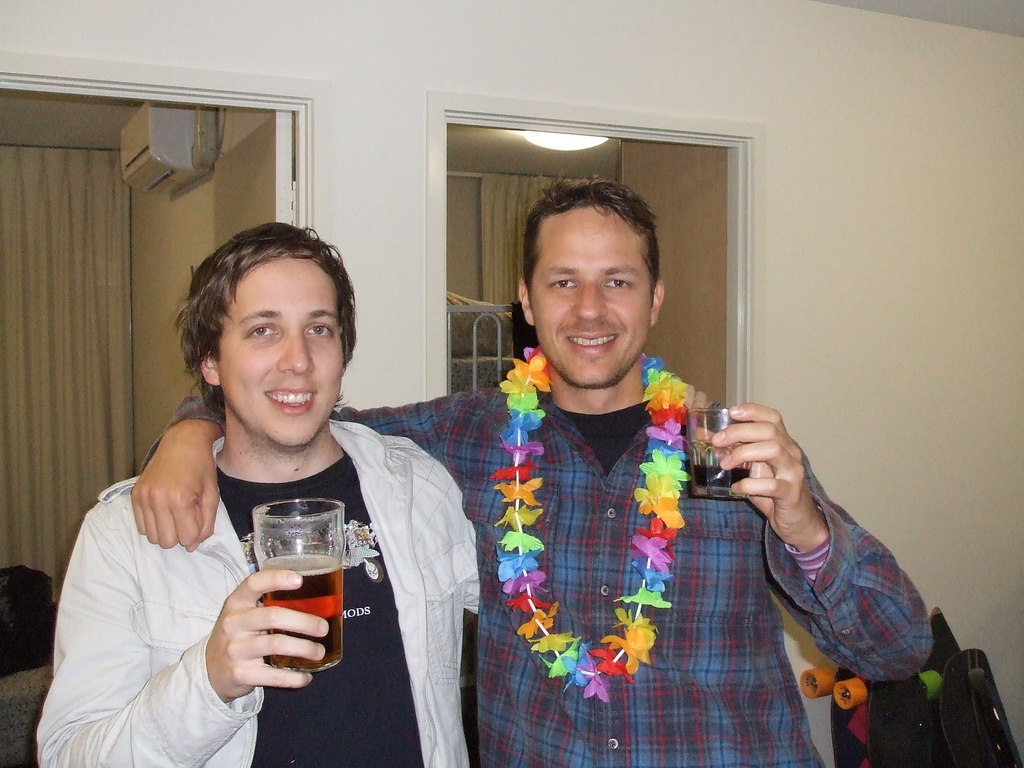 And of course, my one and only partner in pushing - Trav! 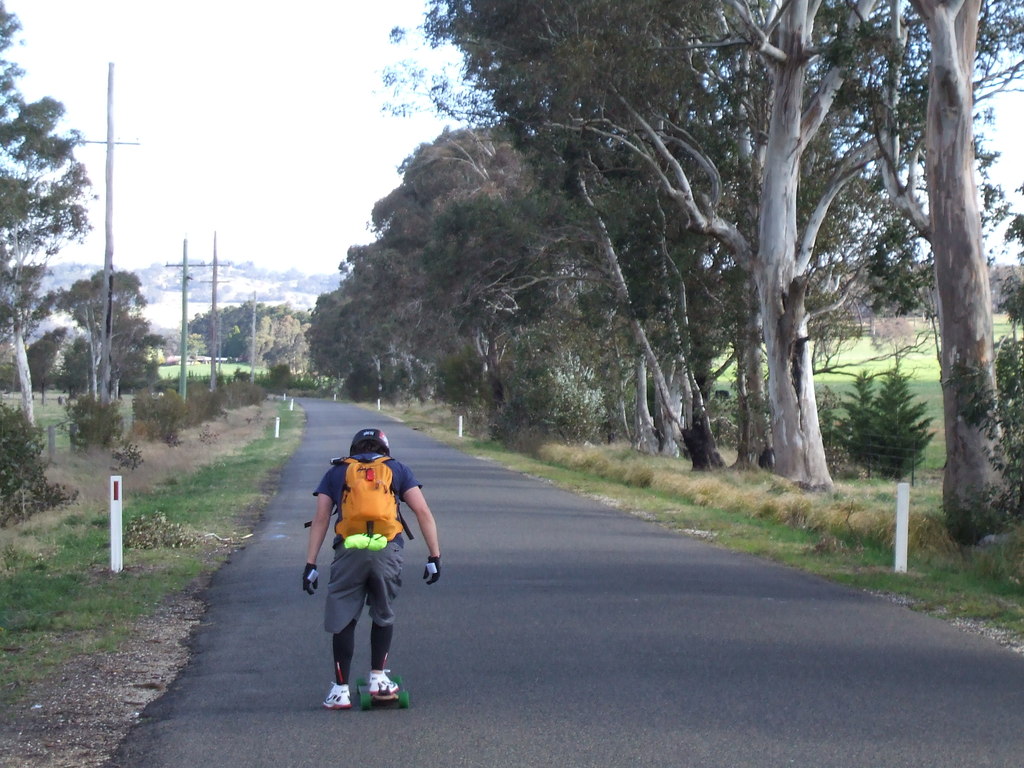 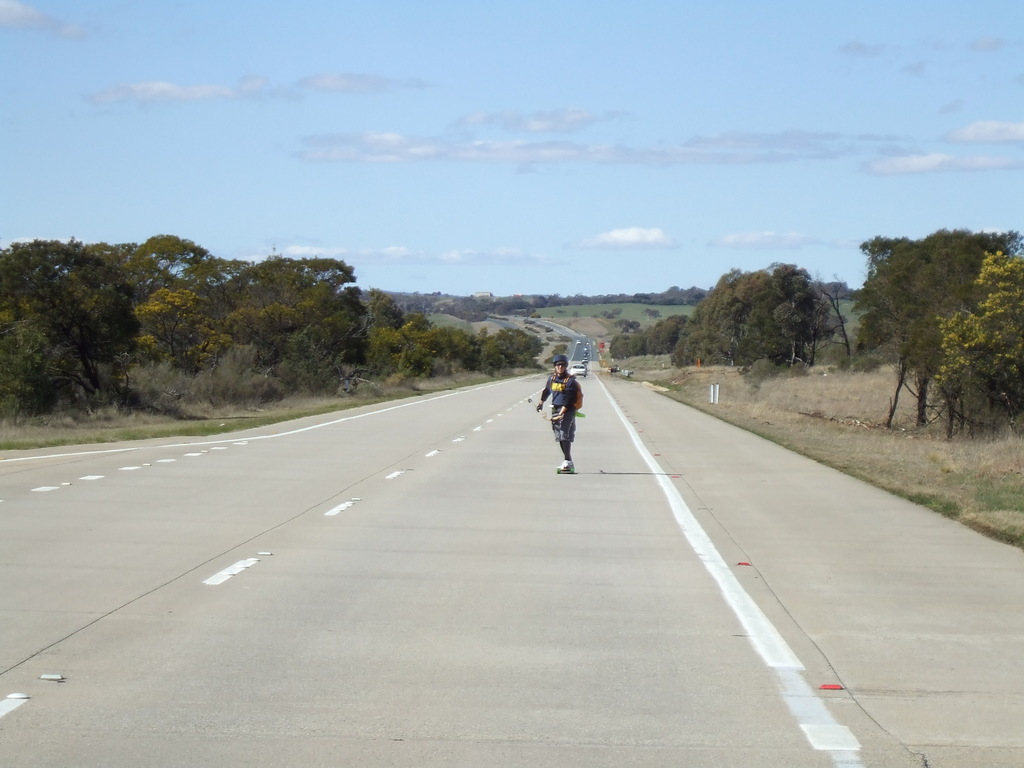 Premium Member Comment by Ian Coggan on September 24, 2010 at 1:20
that last hill makes me wanna commit!!

Premium Member Comment by Dani on September 24, 2010 at 5:04
Nice one guys. A long trip, stories to remember and friends to be kept.

Comment by nat 'wafflesole' on September 24, 2010 at 10:52
SO SO RAD GUYS!! SKating distance is something very special indeed. Welcome to the club. Next time I'll come over and join you!

I'll get it up on the front page of skatefurther asap!!

Comment by Robbo on September 24, 2010 at 11:10
Trav just had stock randals with some major cutout work done for the hangers.

Premium Member Comment by Trav on September 24, 2010 at 11:28
"when you’re on the road you pack a lot of life into one day. It was a reminder of how life ought to be lived. And for that alone, the trip was well worth it." - well summed up Haggy and great write up!

yeah big thanks to Robbo and the Hopshop for his over engineering genius (still think my upside-down trucks is a winner). Nat - loads of hanger bite, but once up to rolling speed it turns enough..
Also to Owen, Henry and Simon and their families for putting us up for a night. Really rad to be part of a community that welcomed us into their homes and fed us. I can't really think of any other sport where people would do that for one another.
I never fully understood the term "spreading the stoke" until this trip. The amount of support and happy car horn beeps we got along the way and to top it off with a school bus of super stoked kids was a really cool way to end the trip.

And of course big ups to my push partner in crime, Haggy. He didn't mention the first 9 hour day was complete hell on wheels, even having to push downhills due to roughness was such a spirit crusher. I had given up all hope at about the 6 hour mark, but he got me thru it, thanks dude!!

until next time.
Trav

Premium Member Comment by Marek on September 24, 2010 at 14:50
Excellent write up and big thumbs up boy. I was surprised to see you at the slalom race let alone for Haggy to win it! Legends.

Comment by Simmo on September 24, 2010 at 21:12
It was really great to meet you guys and have you stay over. My daughter won't stop talking about you both. She loves the photos.