The Pros Put The Groms In Their Place

The second Noosa Hill Climb social event/freeride was on! 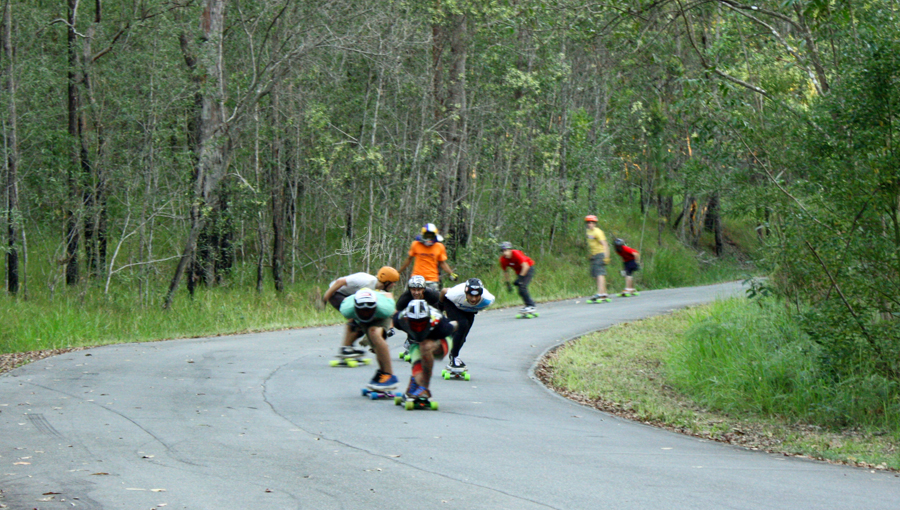 The week leading up to this amazing event was glorious sunshine all week on the Sunshine Coast, living up to its name. However on Thursday and Friday rain and dark threatening clouds were putting the charity event on edge. Everyone was waiting for an official call.
Race day morning and there wasn't a cloud in the sky! Let's race! Was announced on ASRA in the morning and we had a great turn out.
Groms had started turning up at the site just after 9am, beating the events organisers!
However, the older generation riders didn't turn up till right on the bell. Right as heats were being organised.
32 racers registered overall and donated to Little Justin raising $243 for the guy! 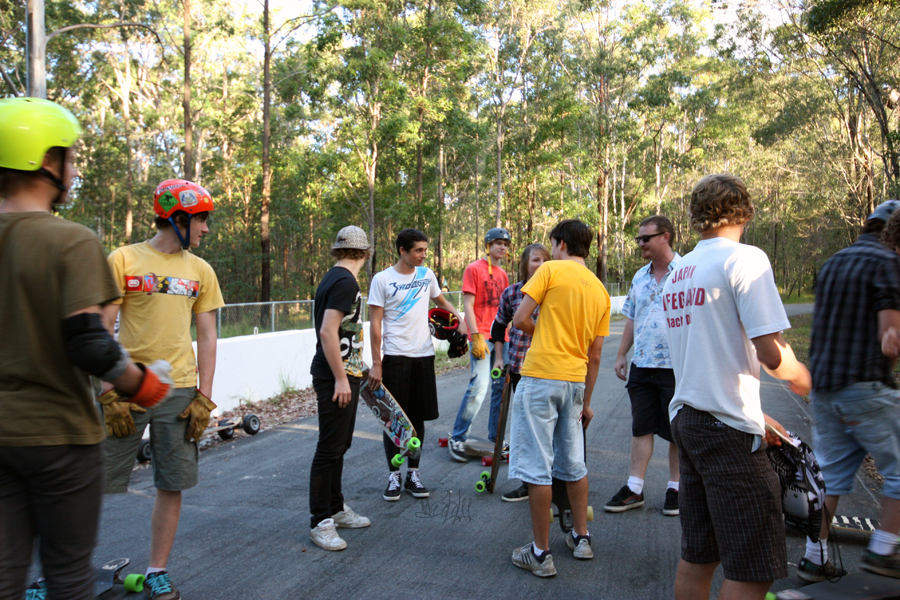 Matty Leadfoot and I had set up some soccer cones to try and encourage the racers to keep left because cyclists are common on this route. Originally it was a suggestion but everyone agreed on a general election to play it safe.
First heats were arranged and everyone was loaded in the cars to get to the top.
With Matty Leadfoot on the start line in control of the communications between the start and finish lines, everything looked set and sweet.
Everyone came down in one piece and the plan was to have a points system like last time with the people with the highest points go through to the Quarter Finals.
Then disaster! The action was put in place too early, completely missing the second heat!
The racers were devastated! Not really. But the people who got third or worse would have to wait until the finals were finished to get another race.
That didn't keep the super stoked ones from hitching back to the top and scoring a ride back down behind the Quarter final racers.
With some very close racing the field was shrinking to the business end of things. 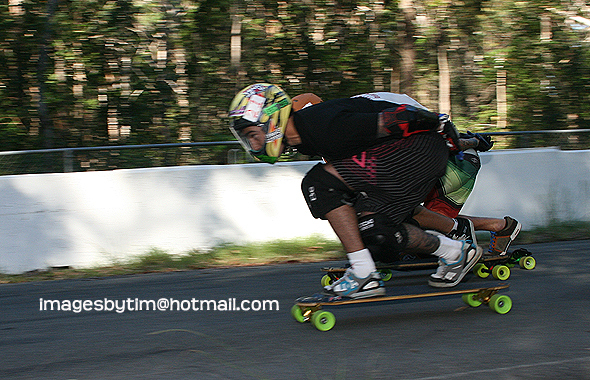 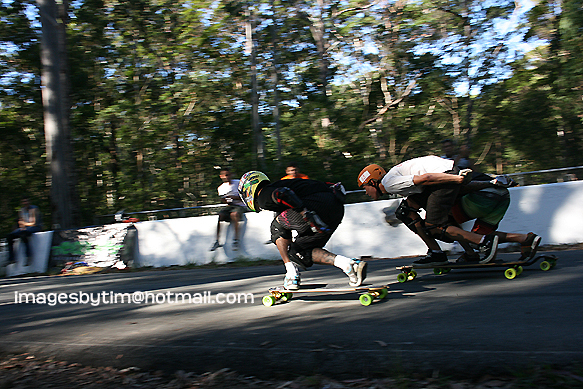 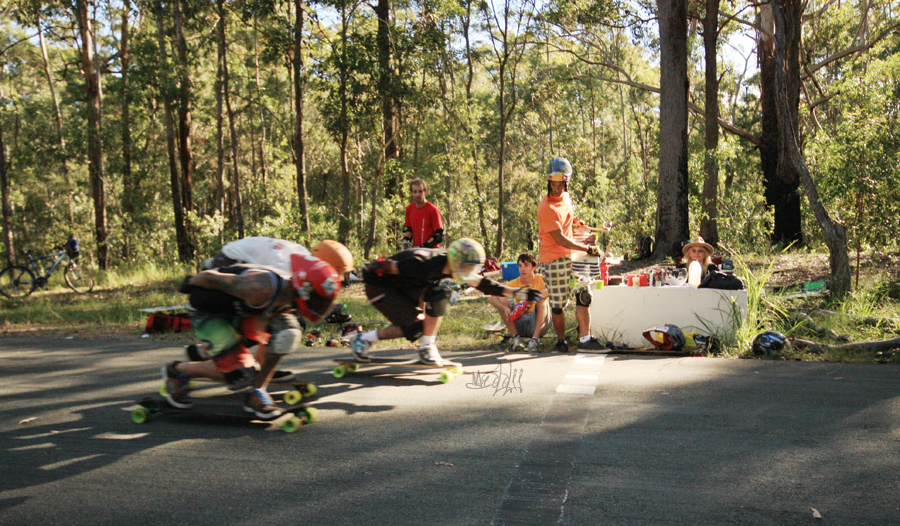 All of the Groms were knocked out in the Semi Finals leaving a Final with no Groms!
This just could not do. So Meddii organised for there to be a Groms final with the top placed Groms to battle it out.
The Grom final is the closest I have ever seen! Merrick Wildash came from behind in the last metre to beat Matt Pascoe for the Grom Champion! 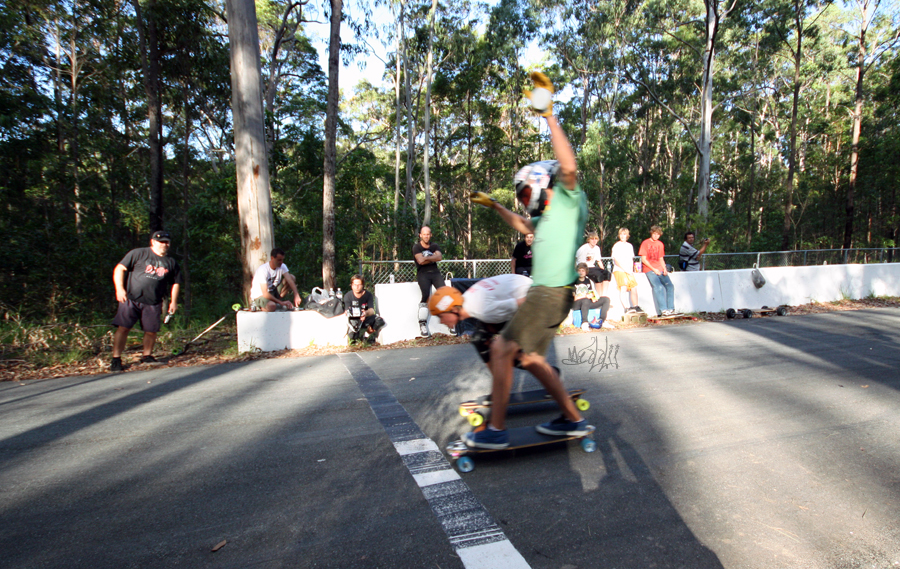 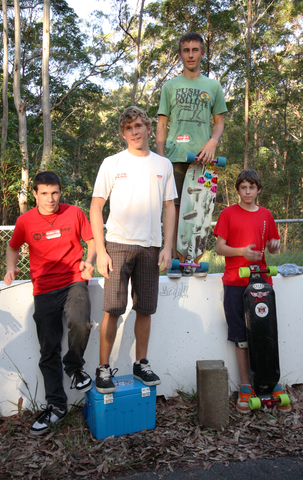 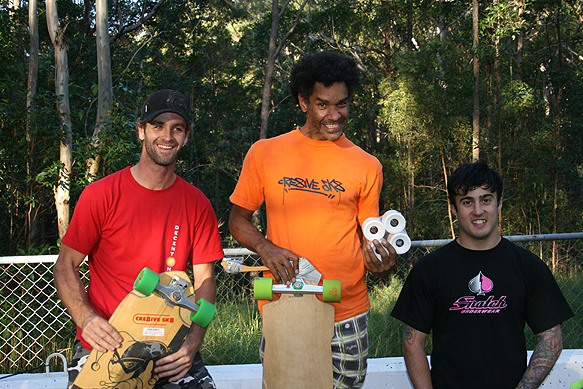 The turn out was absolutely amazing so congratulations to everyone who came and helped!
Meddii, Meddii's mum and Matty Leadfoot! Champions! Couldn't have done it without you! 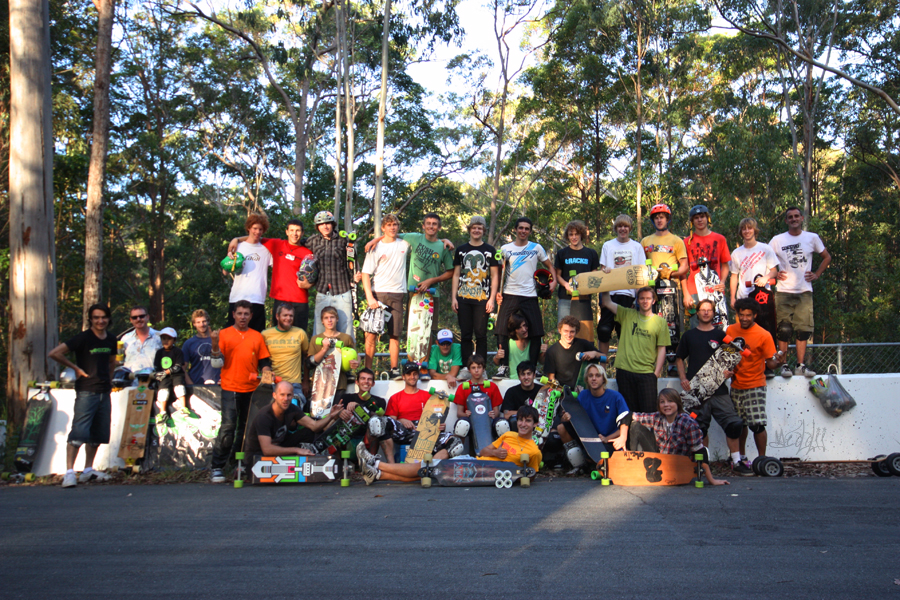 Massive thanks to Team Early Skateboards who's team riders blew us away, especially Jaxon! The prizes were amazingly generous and from everything from a new deck, to wheels, stickers, a helmet, pads and all round stoke! Thanks a million! Photographers used in this article were both Meddii and Tim. Thanks for some epic shots!

And finally to those very generous people who offered lifts to the top of the hill for the stoked skaters. From parents to friends and even Arbi and Olivier who hitch-hiked a couple of times! Well done!

Comment by Meddii Blackburn on May 23, 2010 at 23:40
Excellent write up Elliot!
I'm still super stoked from it. And I'm glad that we all were able to help out Little Justin in some form or another, that kid deserves the world.
Thanks everyone for turning up and having an awesome time. Can't wait until the next one!! Hope to see you all there!

Premium Member Comment by Stephen Daddow on May 23, 2010 at 23:59
Yeah you groms put on a good show. There was some good tight racing through out the day and the groms were ripping down super fast!! It was awesome to see young Jacko speeding down the hill. I'm sure everyone got some stoke from the day....
Nice one Leadfoot for coming up and lending a hand in the show.
Hope little Justin got some stoke out of it to...
Congrats again Groms

Once again! great day.
Next time, lets throw some casual slalom and luge into the mix.

Premium Member Comment by haggy on May 24, 2010 at 11:36
Nice write up. Keep em coming.
Looks like a great event on a fun hill. and Jason Wright makes an appearance! rad...
I'll be in noosa in two weeks, coming up on friday 4 june, anyone wanna go fora roll let me know...

Premium Member Comment by Lance and Josh on May 24, 2010 at 11:58
yeah mate we'll come up to have some runs with you anytime
let us know details and we will escort you there etc

Comment by sammy T on May 24, 2010 at 18:45
hahahaah yer true merrick.
Well we should have one every weekend hahah nah kidding. I couldnt organise one dude. i cant even drive but yer we should definetly have another soon aye!

Comment by Elliot O on May 24, 2010 at 19:33
True, another is in the brainstorming phase.
Planned for early term three