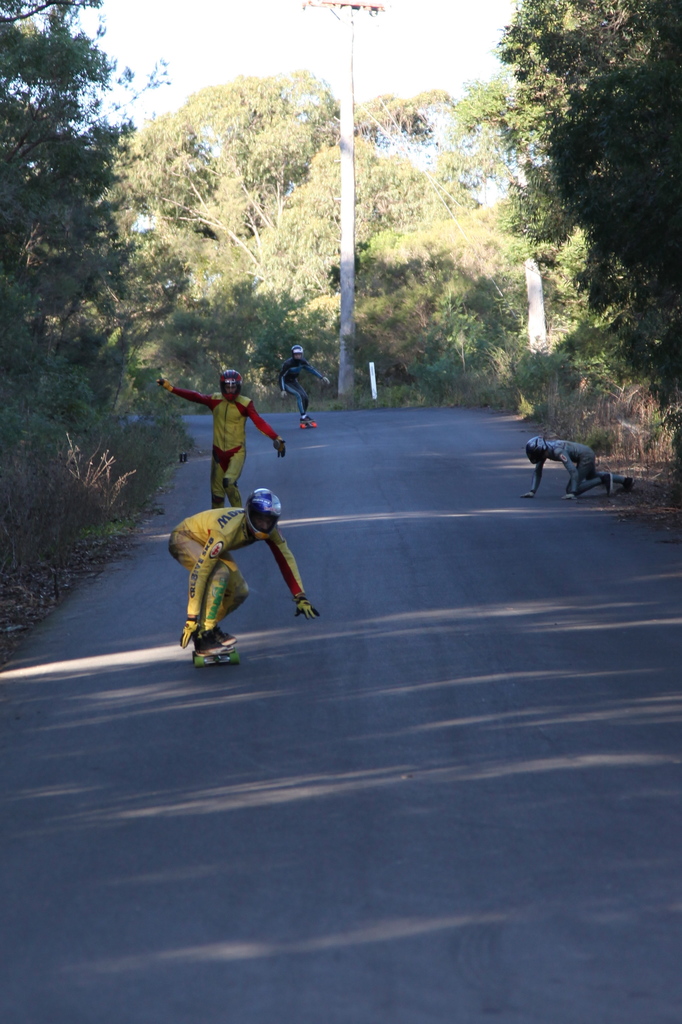 like a fine curry, skateboard races seem to be better the second time around.

nestled in the picturesque Kangaroo valley region, tucked away from the hustle and bustle lies a patch of butter-smooth road with a decent downhill gradient that weaves and winds it's way down to a ridiculous hairpin and then on to a free campsite, could there be a better spot for an outlaw!

i was planning to leave canberra early, get up to the campsite and skate all afternoon, get as much practice in as i could before the race on sunday, this failed and i didn't get there till 3.30. i decided to skate down a hill on the way there (it hurts to drive down sweet hills) got all leathered up and phsyched, pushed off only to pass an oncoming policeman! i jumped back in the follow car and thought we got away with it, but sure enough after a minute the red and blue pulled us over and gave us a very stern talking to. poor old cop was beside himself!

so lesson learned. don't skate before an outlaw!

after this we got to the race hill had a run and set up camp. the sydney guys were already there, seshing the hill.

i didn't get any photo's or footage of the campsite, but it truely is a fantastic spot, it's down by a river and there's heaps of wildlife, wombats, kangaroos, kookaburra's etc and they're all really tame!

other then us and a handful of grey nomads, the campsite was deserted. a good sign for the race the next day.
after partying on around our 'cooking' fire we went to bed and woke to this 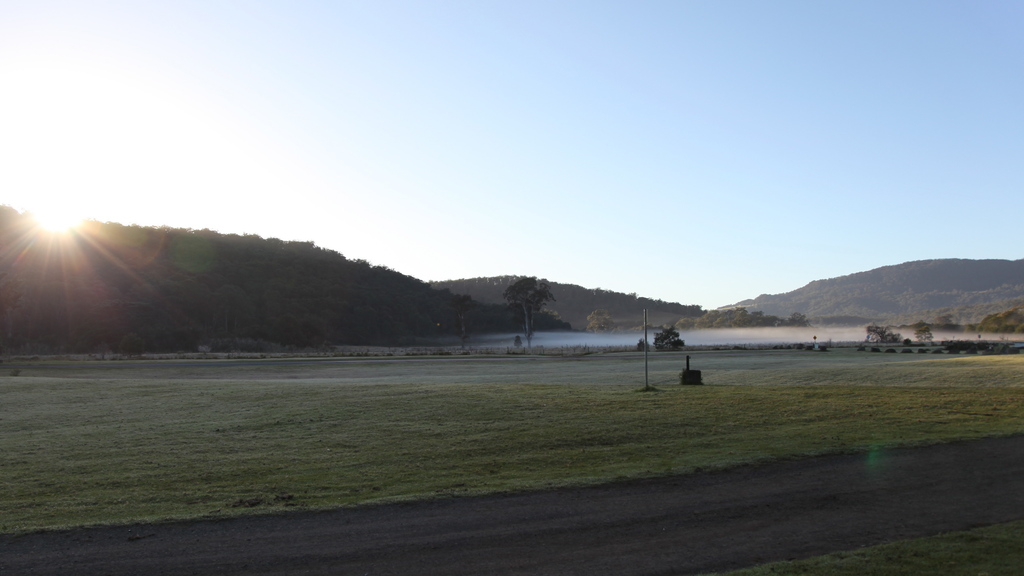 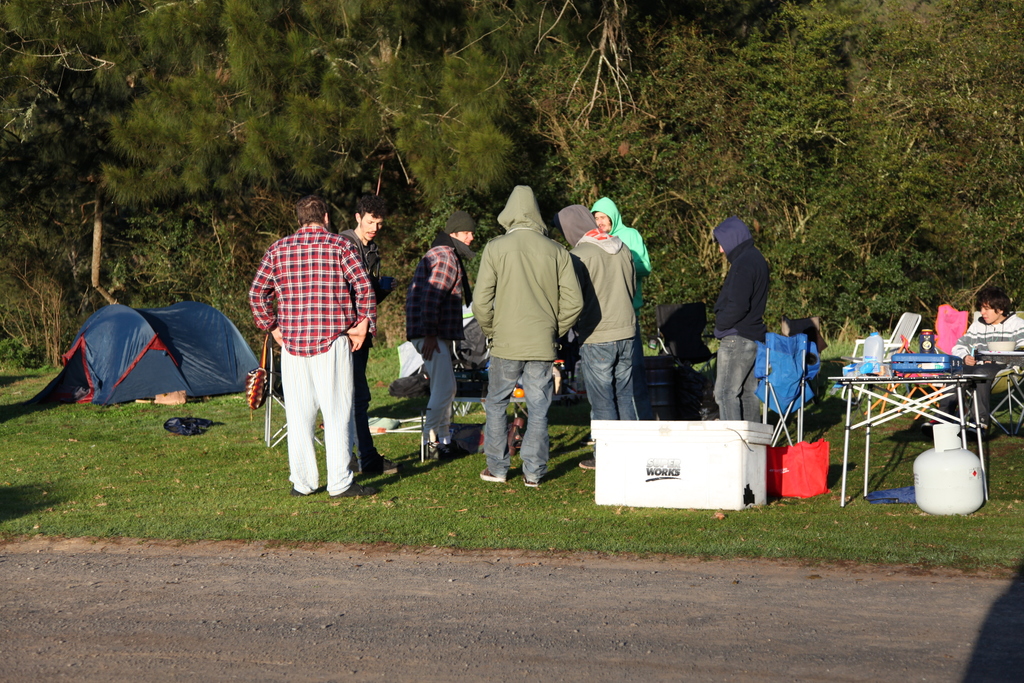 after breakfast and morning prayers, riders who were to soft to handle a night in the wild started to trickle in and it was on! 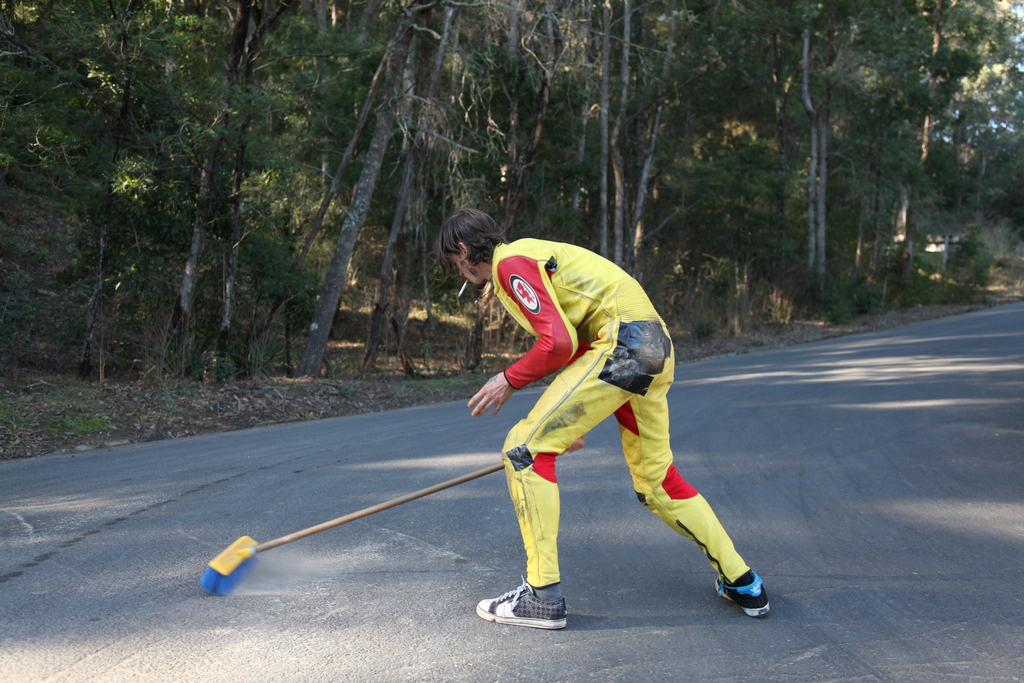 cam preparing for his 'clean sweep' 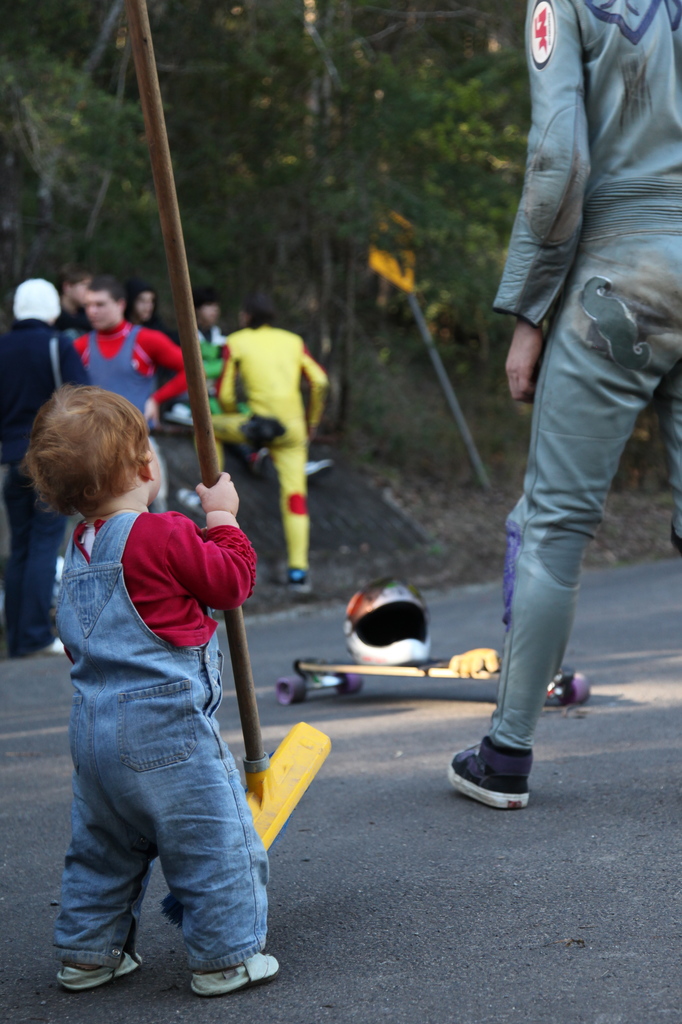 sophia showing the groms how to sweep a corner

the road was wet, it didn't really dry all day, this made for interesting racing. The top bit of the track is sweepers and on a dry day you tuck and rail and it's fairly easy, but on this day you tucked and 'gingerly' railed those corners! 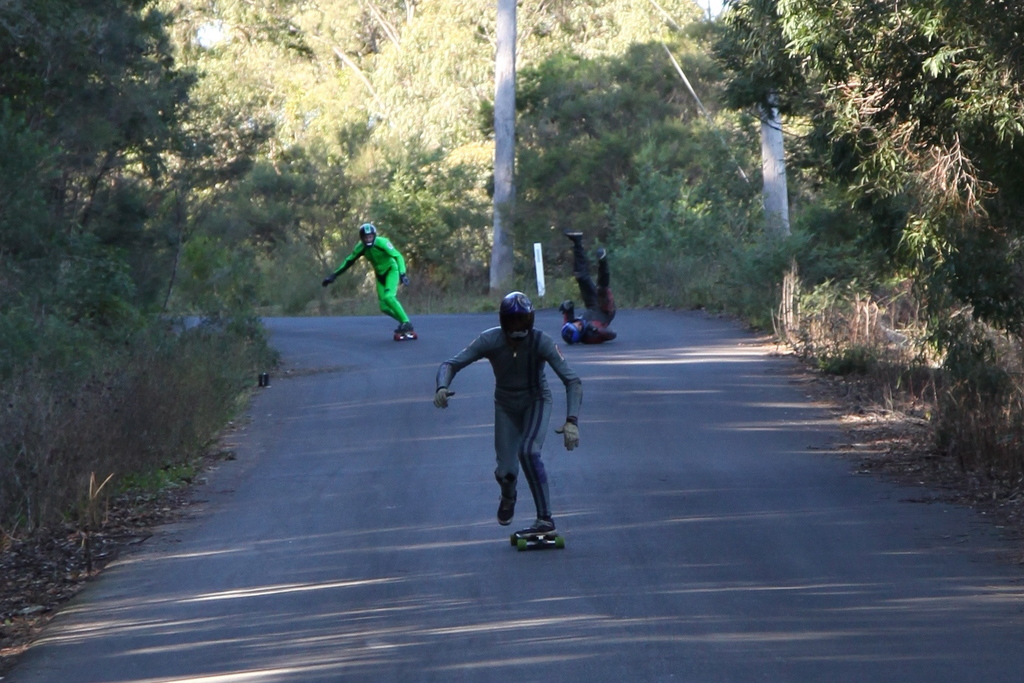 coming in way to hot! 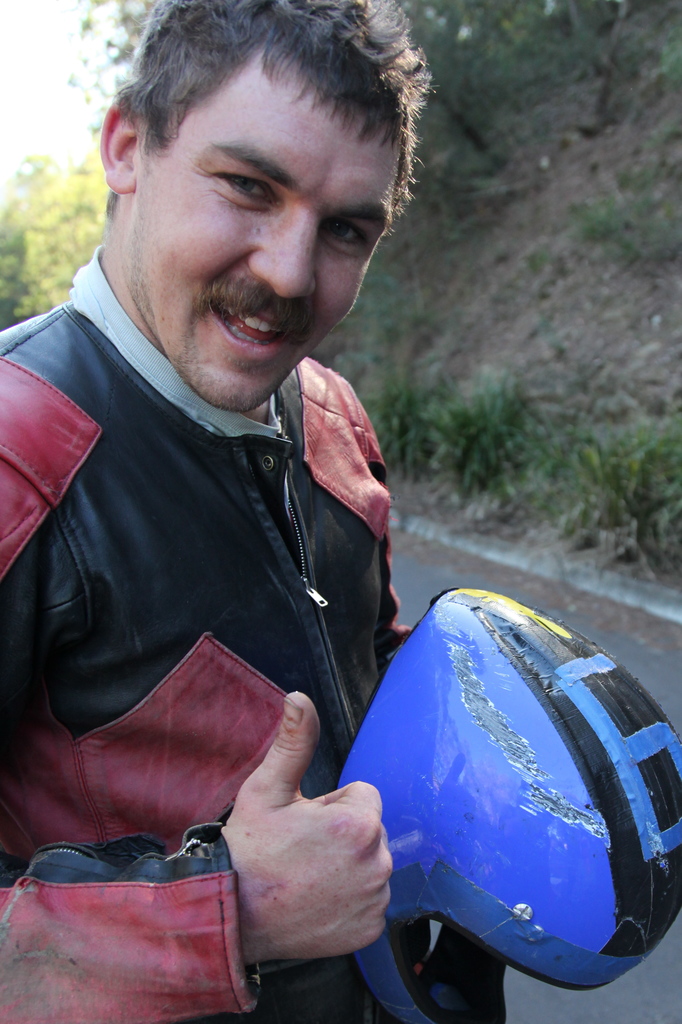 see, wear your helmets kids! (i owe you owen!)
that's the top bit, on to the crazy hairpin. you pretty much have to scrub 40+km's of speed before the corner to make it around, and the crew were killing it pretty much everyone (except for myself cause i'm a girl) was pulling massive checks and getting around the corner with style. 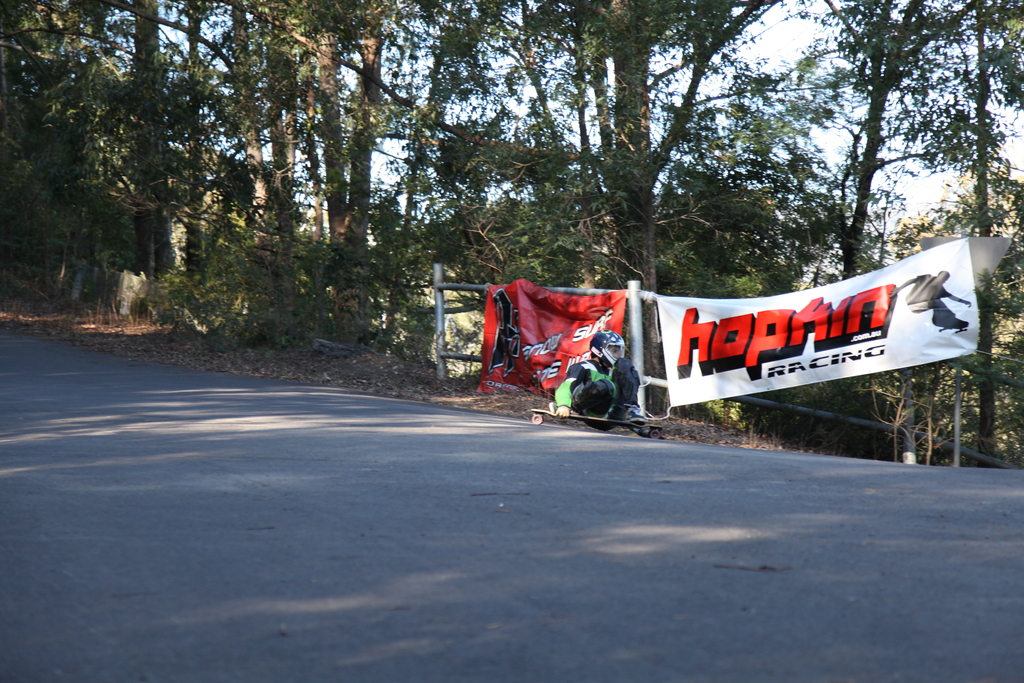 special mention has to go out to the grom 'Kelly', he was the most stylish kid on that corner, and was overtaking dudes sliding around the outside! crazy stuff! 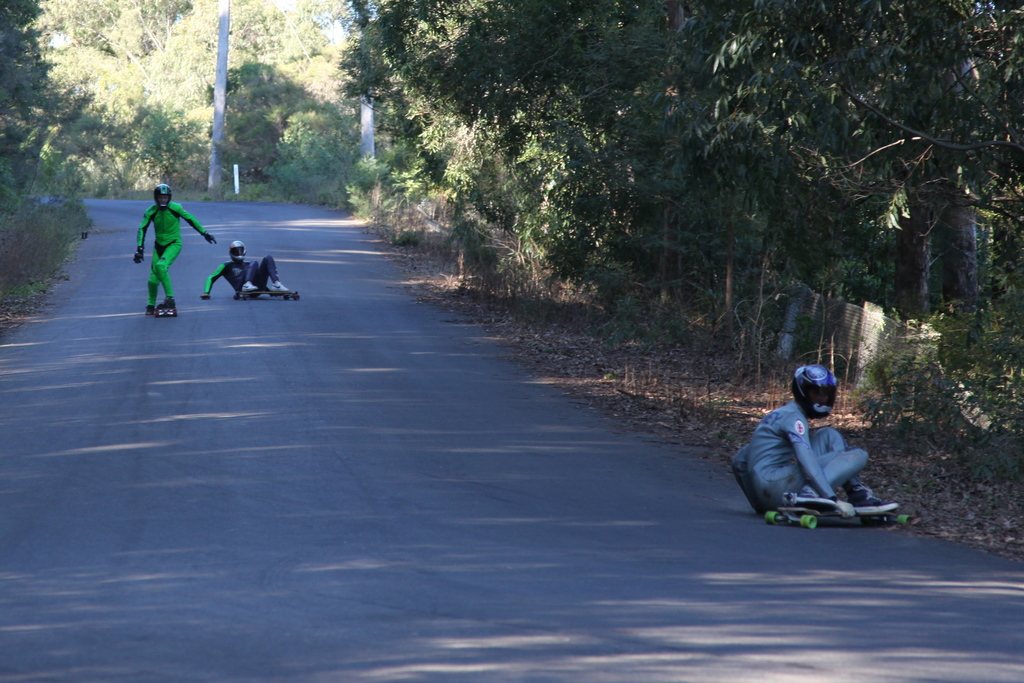 alex haggy and owen sliding into the corner now imagine if scott was wearing a g-string!
after a few practice runs, we started the race, we did a kind of round robin thing where we had a bunch of four man heats trying to make sure everyone raced everyone else at least once. you got points for each run depending where you placed. everyone was racing hard, i have to say the level of riding has gone up in leaps and bounds since the last race, dudes were shreading! look at the poise! Steve Daddow came down to race on his 39th birthday, that's dedication to the scene!!! we had a cake, it was rad. steazy Alex leading some tight racing, it was hectic when the pack was tight coming into the hairpin 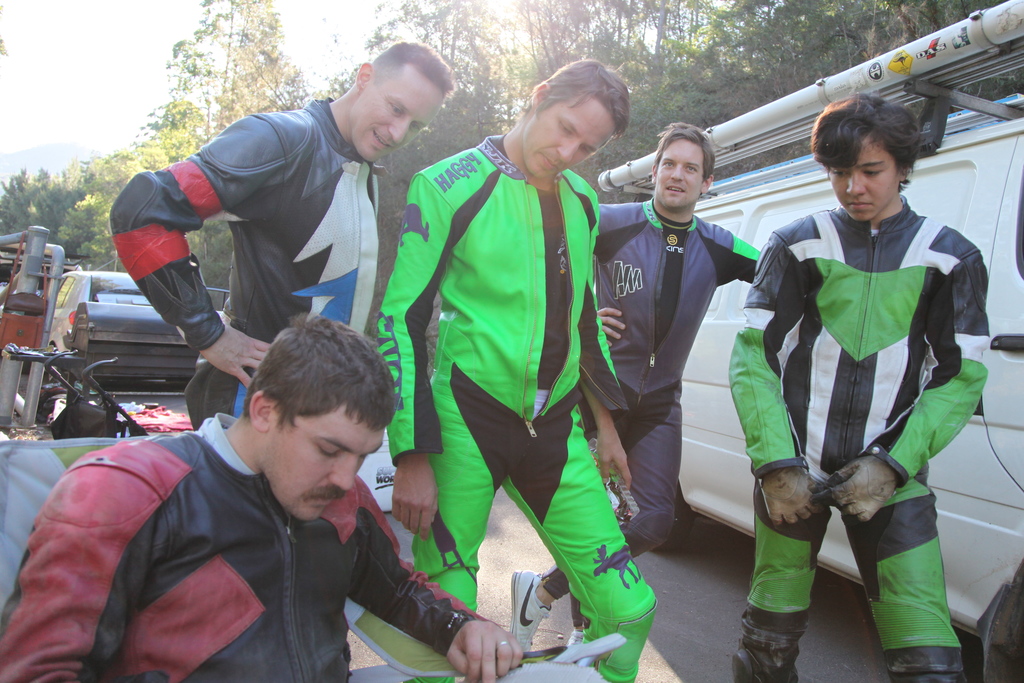 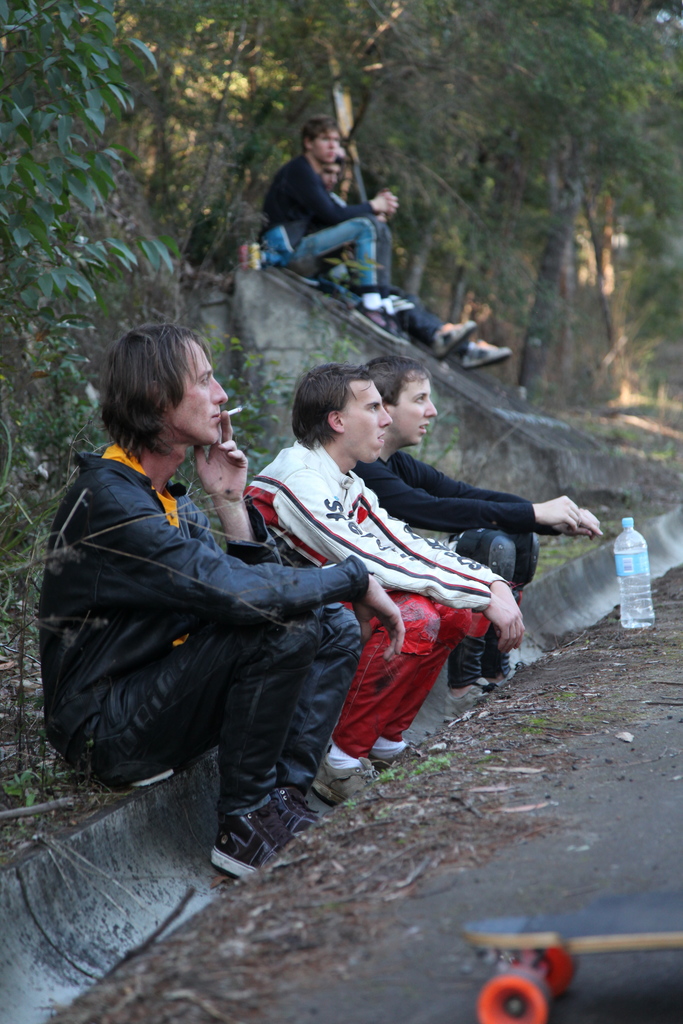 the top eight were seeded into semifinals. cam and daddow were seeded equal top it was going to be close!
after the semifinals, there was a consolidation round to get 5th to 8th place.
steve, cam owen and cooper made it into the final. it was tight racing all the way down the course, owen crashed out on the straight before the hairpin and daddow came in a bit to hot and was pipped by cam with cooper coming in third. 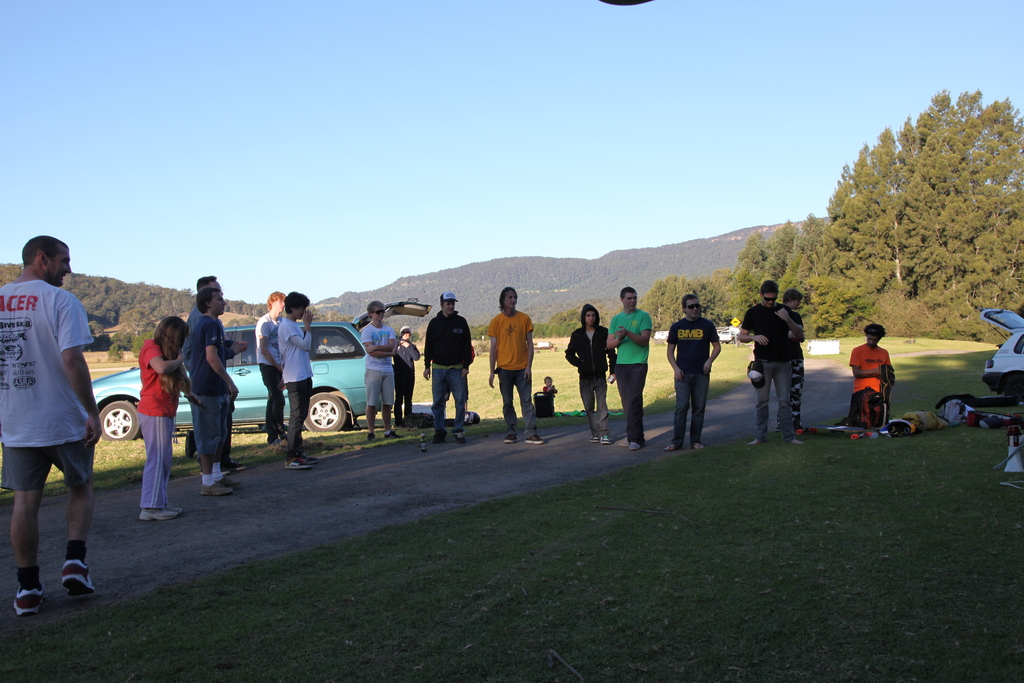 oh, and dave smashed the luge category took out 1st, 2nd and 3rd! 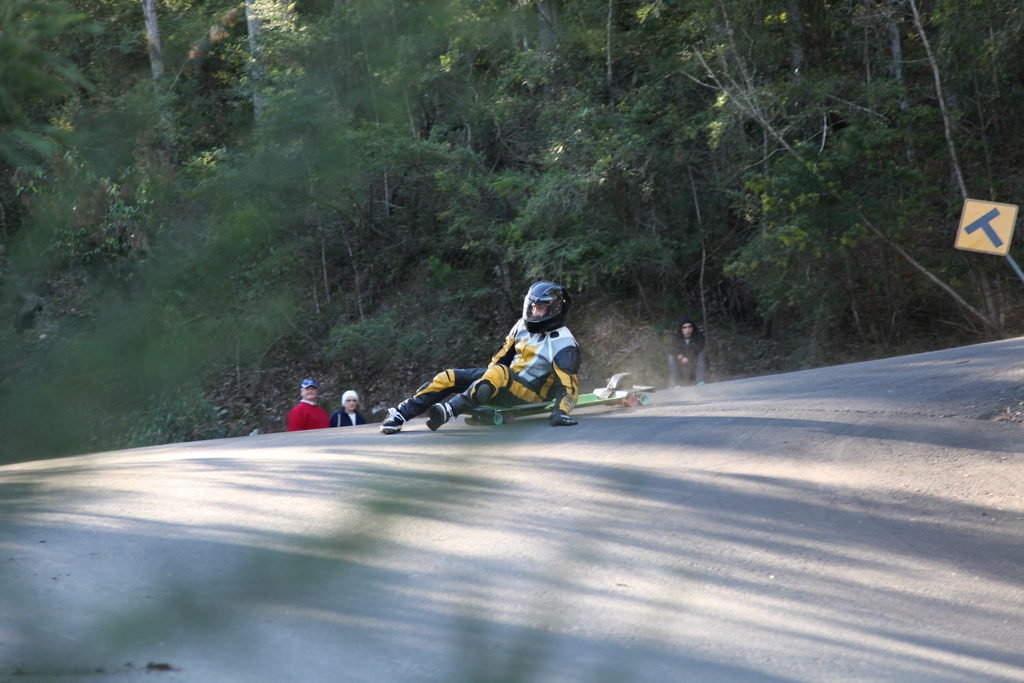 massive thanks to the marshals and chris for driving all day couldn't have done it without you guys.
also huge thanks to hopkin racing, adrenaline plus and glyde/steve for all the product and prizes, there was around $1800 worth of gear! support the guys who support you, buy from these guys!!
congrats to the winners everyone was killing it, next one is gonna be bigger and better again!
it was rad to see the groms stepping it up!

p.s i'd encourage anyone thinking about putting a race on to just do it, it'd be rad to get an Aussie circuit set up!
peace

Premium Member Comment by Rob Mcwhinnie on June 28, 2010 at 4:48
Sweet photos and write up. onya Cam for the win and and Daddow for travelling interstate on his B-Day, , and Coops grabing a podium. awsome photo of Alex stlying it up hey, downhill madness

Premium Member Comment by Trav on June 28, 2010 at 13:23
sweet writeup Henry, can't wait for the next one... such a chilled atmosphere..
has anyone thought of a Saturday race, then camp / party Saturday night?

Comment by Jay Capellari on June 28, 2010 at 14:11
nice one, looked like so much fun! There are more and more of these types of races being organised. I hope people keep making these races happen coz its great fun and heaps good practice for everyone, especially us guys who haven't done any big races yet.

Premium Member Comment by Jacko on June 28, 2010 at 23:32
yeah boys nice work! great write up there Henry, ive been hanging out for ages to find out how the day went, stoked to get the run down on the event! Congrats Kam, your a fast fucker and picking it up quick, stoked for you to get a taste of victory, keep it up man you know how it feels now!
Great job to the crew who put it together, and stoked that there was a shit tone of stuff to give away, its rad that so many people got behind this little event.
Next time theres a K-Valley outlaw im gonna make sure i can race it instead of being injured or away! You fuckers are going down mwahahaha

Premium Member Comment by haggy on June 29, 2010 at 14:57
Nice job Henry. Good to see some photos of the event and read up on the stoke. You guys organised a terrific race and I am already looking forward to the next one. There was no shortage of action for the spectators, which makes this an excellent place for races. Congrats to winners and grinners, the latter includes us all! great to have Steve down on his 39th. Kanufi's butt puck was another highlight, haha. Camping was great fun as well, I encourage everyone to come camp next time. Thanks to all. Jacko you better watch out, these guys are getting fast back home...!

Premium Member Comment by Grits on June 30, 2010 at 22:51
Haggy you're looking looking flash in those new leathers!

Congrats on holding what looks like a sweet little event. Well done to dave, next there will be more lugers!
Happy birthday to steve too! yeah qld represent.