Written by Cailin Cousins
For the local Williams Lake News 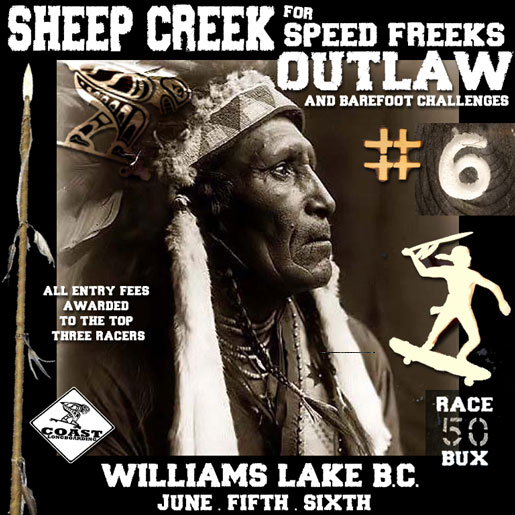 About 15 longboarders arrived at the Sheep Creek bridge just West of Williams Lake yesterday afternoon, ready to take on 'the hill' for the 6th year in a row at what these extreme athletes called the 'Sheep Creek for Speed Freaks' event. 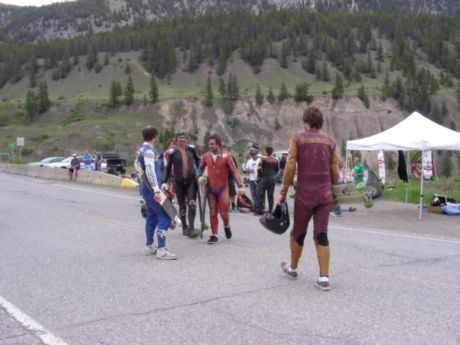 Participants recently arrived in British Columbia from as far away as Australia and Japan specifically to participate in the 'Concrete Wave Loco Express Tour 2010' which starts in April and runs through August in BC, Alberta, California, New Mexico, Colorado, as well as several other states and includes the Sheep Creek run. Spectators of all ages, from newborns to octogenarian watched as the 'boarders' arrived at the finish line at Sheep Creek bridge after a nearly 4 kilometre adventure down twists and turns, avoiding traffic, at speeds nearing 100km/hour. 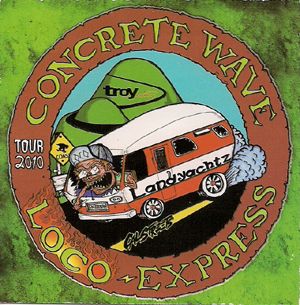 Last year's second place winner, 47-year-old Wes Sampson from the Lower Mainland, advised that Sheep Creek Hill is about a 'seven on the gnar-bar' and definitely high in the 'dangerbility' category. "This is a professional level hill," said Sampson. "There is a little of everything on this run: grade, corners, and major variety in texture of the surface," he added, "including some sections that are like boarding on marbles." Sampson took a fall just before the finish line in 2008 and ripped his leathers up pretty good, but was basically uninjured. "Even though this is an outlaw event (non-sanctioned), there are safety precautions in place." 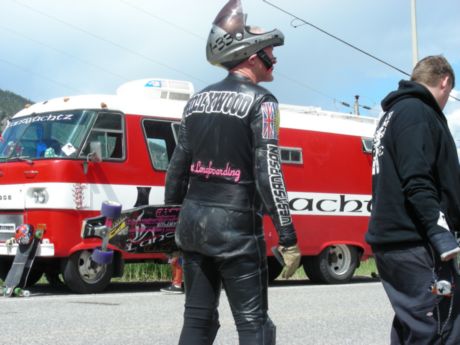 For today's event, there was approximately $500 in prize money, various other prizes and a sheep skull, which Wes Sampson found and had bronzed recently, was the grand prize trophy for this year's event. There are organizations which put together large 'sanctioned' events where hay bales are used to pad the course, and ambulance attendants are present. "Some of these events started out small, similar to the 'Sheep Creek Speed Freak' event, but have grown to over 300 participants at a time with $8,000 in prizes donated by both local and national big name sponsors," said one participant. "At sanctioned events the communities often get involved by organizing parades, trade-shows and live entertainment."


Sheeps Creek for Speed Freaks from Skatehorde.com on Vimeo.

Premium Member Comment by Fitz on June 9, 2010 at 23:54
Loving that Jazz Flute.
Very funky. Was that a Ron Burgandy number?