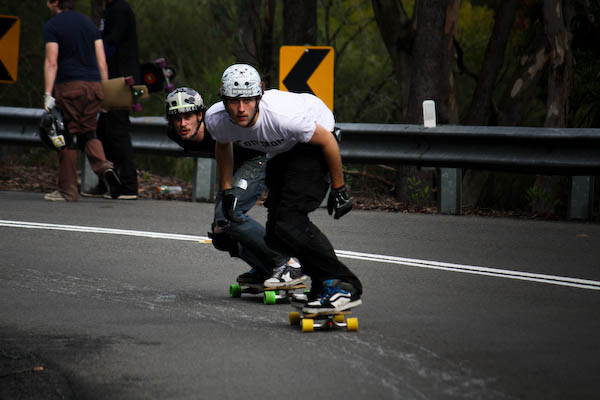 GABE TAKES THE WIN
Galston Gorge is a hairpin filled wonderland in the Northern bushland of Sydney, flanked by Sandstone cliffs and walls, This Road has always been talked of skating...If only there were no cars! The word on the street that Galston gorge rd was shut for road works spread like wild fire and sure enough like a fat kid to cake the Sydney crew scrambled to ride the notorious hairpins of Galston. One epic free ride later it was promptly decided to host an outlaw race at the Gorge while we could. 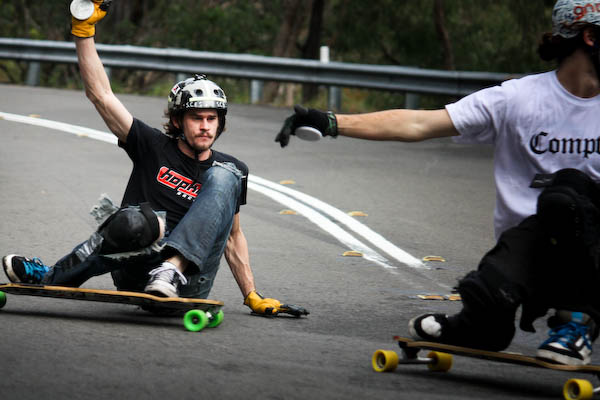 As skaters rolled up a good crowd from around sydney, Canberra, and Newcastle began to form at the top of the hill. First call of the day was sessioning corners, and what a place to session corners! and damp track gave us plenty of slides and drifts into Hairpins getting everyone warmed up and styling. With the wet corners having a good going over it was onto the race. The Track was only the middle part of the hill but it contained more than enough action to keep things interesting. A steep start led into a left Hairpin then a long run into a wet right Hairpin followed shortly after by a sweeping right into a left Hairpin and a short dash to the finish line. 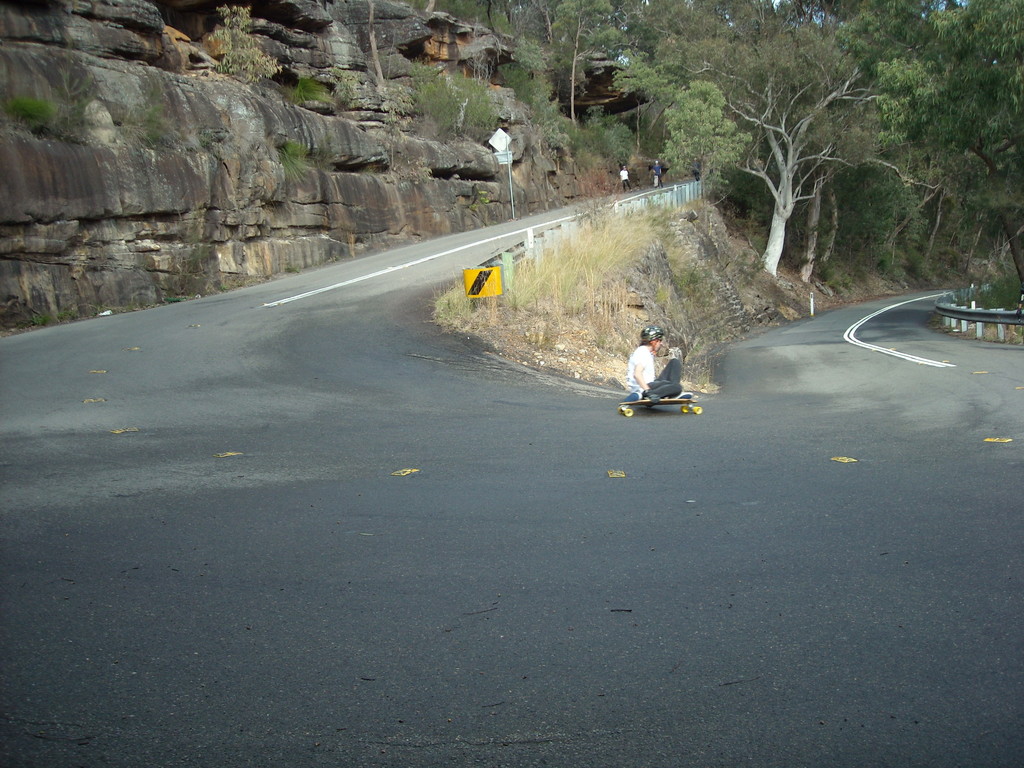 With masterful skill and a points for place system, riders were bunch into 3 man race groups and tried to place high enough to score enough points to be in the final. The heats saw some great races with massive blowouts in the wet corner and some hairy moments as riders dodged each other and their boards on the super tight corners. heavy falls were taken by Manchild on the wet corner who sprted the best t-shirt makings of the day, and Henry who tripped over his board just metres before the finish line in a hilarious recovery from a 3 man corner assult in some very tight racing. Most other races saw riders push hard out of each corner and the nature of the track meant you could never discount the person behind you as you never knew if you or your board was the next to go into the bush or over a cliff, as Finbar found out... the hard way. The days proceedings took a turn as the rain clouds rolled over we knew we had to act quickly. with too many even points to place a final 3 racers, two seven man heats were called and ran as it started to rain and the result was instant carnage with riders all over the place at all times, i don't think i have laughed so hard skating in a long time. The long trek back up to the start was on happening for the top 3 riders. Henry, Gabe and Kam battled it out in the rain that was by now falling solidly, making it a slip and slide all the way down. Gabe getting out in front all riders getting around the first hairpin into the second allomst side by side all slide out Gabe and Cam recover but Henrys board gos for a wander. Gabe and Cam only just keep the wood under there feet through the last right to left hair pin with Gabe coming though the wet wild hairpins of Galston in first place. 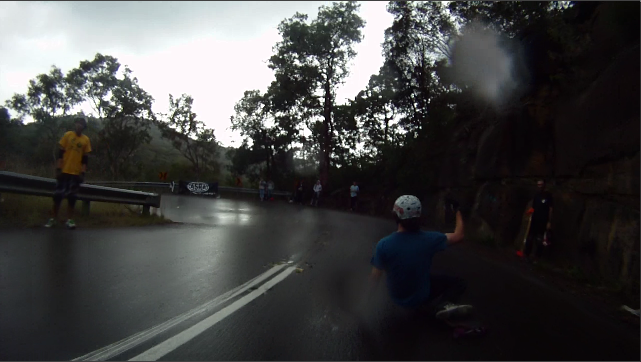 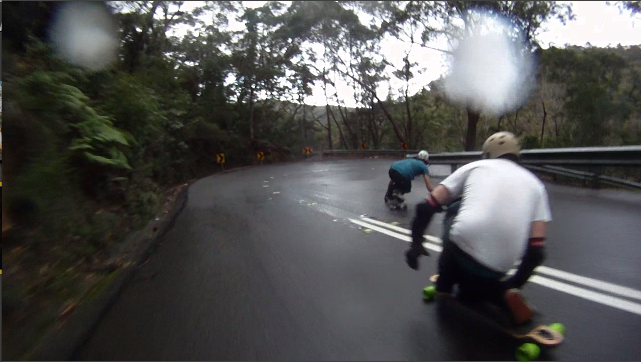 Everyone was wet and over it. so a quick presentation had the winners with some cold hard cash dollar in their sky rockets, and the rest of us Riders left to scrap it out for a product toss, that was intense. Manors? Honor? friendliness? not here. For a minute best mates turn to rabid street dogs as they lunge and grab for stickers and bearings and 2 rogue O'tangs (well done PC who scooped them up after they bounced across a dozen groms hands). It was a great sight! 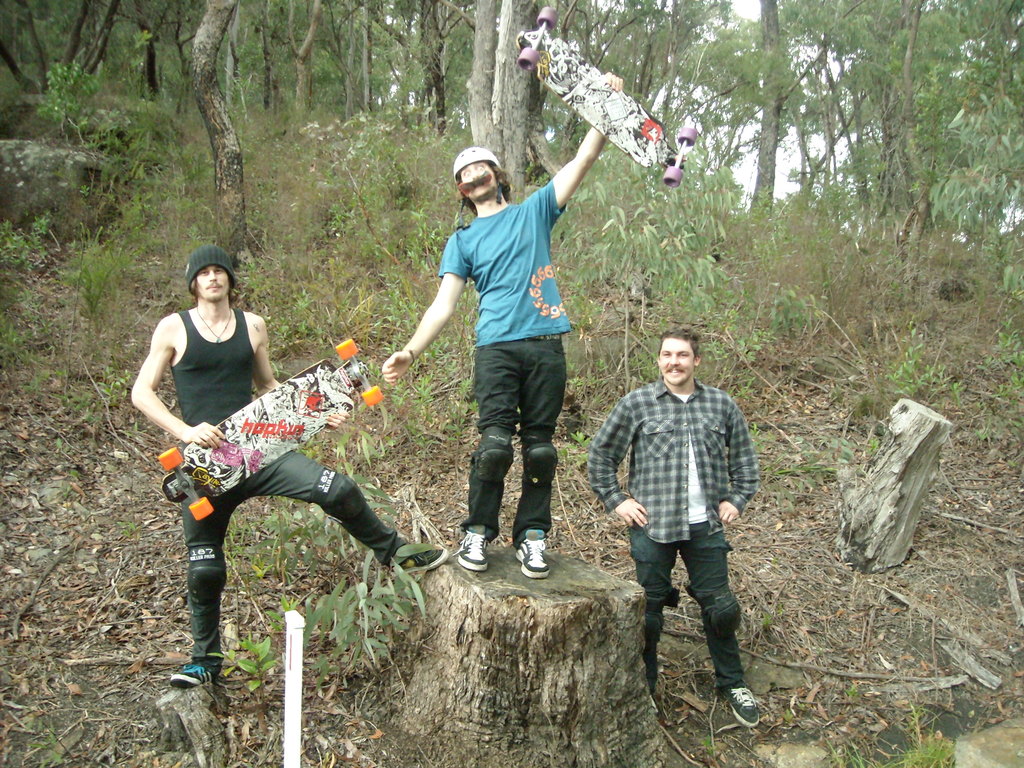 Thanks to Cam and Gabe for putting it on, the start line Tanya and Finish line Ronnie who sports the most hectic ratstail ever.
and HOPKINSKATE.COM for Sponsorship and ASRA for the support, and all the Riders who came and finally raced a road we may not get to race again to the near future. 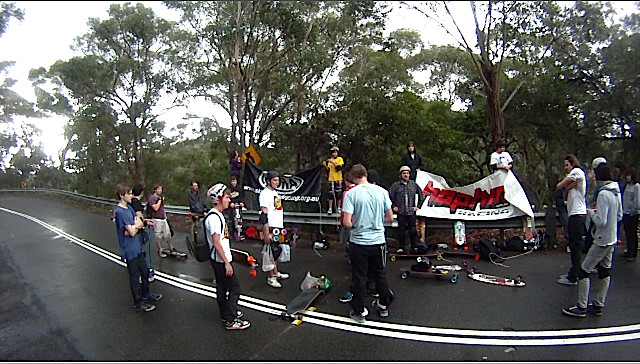 Comment by Cooper Kruize on July 26, 2010 at 16:27
yeeewww great write up man.. sheers gabe and cam for a great fun day of riding (except at the end) hey gabe it looks like going to canada really paid off in this final ay...

Comment by James on July 26, 2010 at 16:37
Great write up for a great day. We'll have to try and get some more road works happening there so we can do it again ;) Cheers to all who came for making it worth the drive from the 'berra.

Premium Member Comment by Gabe on July 26, 2010 at 19:13
hell yeah, rad day and sick racing allround, so great for the younger dudes to be able to race some sick hairpins without the risk of kissing a car bumper

Comment by Brad NS on July 26, 2010 at 19:38
Rad day Gabe and Cam very well done !! Everyone skated sick Groms are realy pushing hard ,Maddest hill around especialy in the wet /moss/oil ! LOL ... Had one full run down it with PC Mad ride ..... smashing those dry hiarpins was SICK !

Premium Member Comment by Trav on July 26, 2010 at 19:47
looks like a rad day! good job Cam and Gabe for putting it together... don't think my timing could have been any worse...
thankful we got a couple of sessions in there and some much needed hairpin practice, truly once in a lifetime opportunity to have that road to ourselves.

Comment by Henry King on July 26, 2010 at 20:50
yeah robbo, that cracked me up too!
sick day, great to chill with everyone, props to gabe and cam for putting the day together and for the wins!
so glad we got to race this hill!