Its been 8 months and 4 races since we moved up the coast, each week the local crew has been growing and each race the talent has been improving, as far as outlaws go we have been very lucky and amazingly we have never had a major accident or been shut down. Just heaps of fun, prizes and good times had by all. 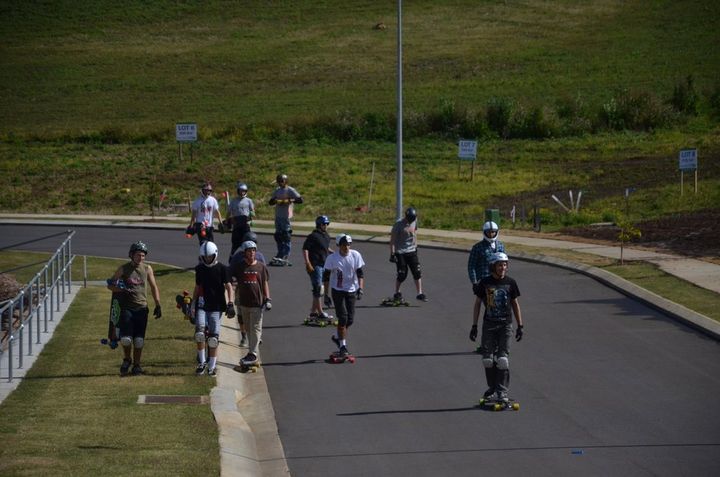 The most recent and our largest Outlaw Race was held just out side of byron bay in Lennox Head, a pristine road course bombing in from a massive drive way around the palm prongs , down a massive straight and a huge right hander and ending in a man made hairpin, we had over 32 competitors arrive from all over the coast, including a bus full of shredders from monkey Pig and Daddow riders showing up to challenge their skills and each other. 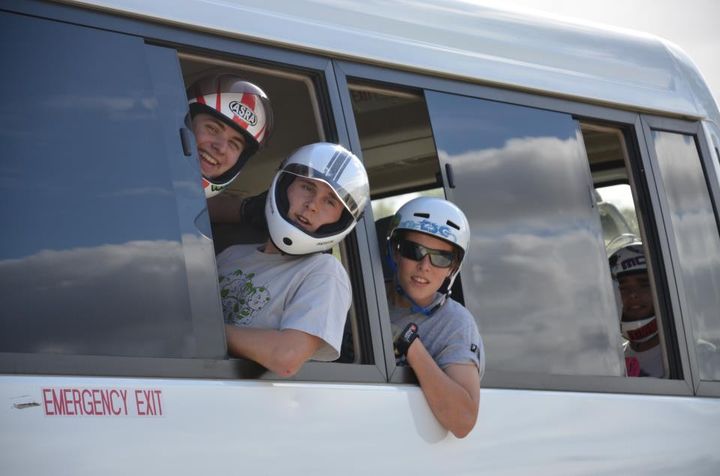 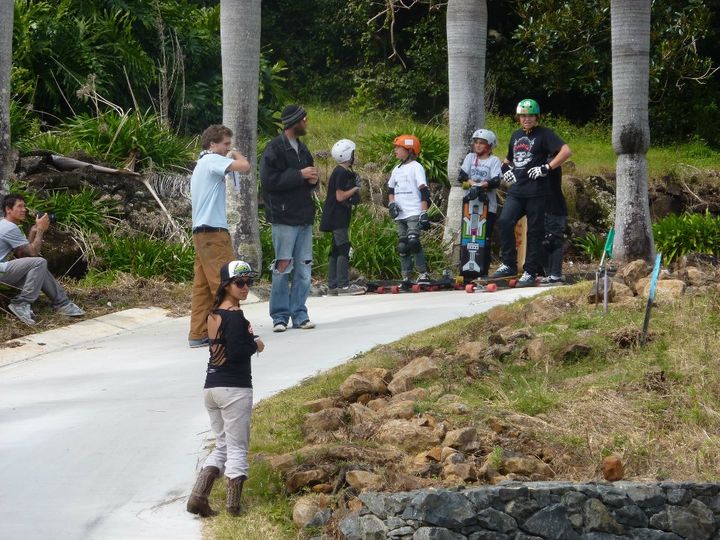 Groms and organisor, the lovely Magaly checking the hill

Before racing started we were stoked to see our main sponsor turn up to check out the day and bring a massive bag of wheels and swagger for the winners, James from Hopkin Racing has been a long supporter of outlaw racing and I was happy to show him how our outlaw series has built community and been spreading the stoke. Another surprise to see was the owners of the land we were riding on, I thought the whole thing was going to be caned before racing had even started but after a quick chat we were giving the right to ride on the road and since it was private land if the cops turned up we could tell them to get stuffed too. too sleasy! Ready to thrash, tough line up for all the girls 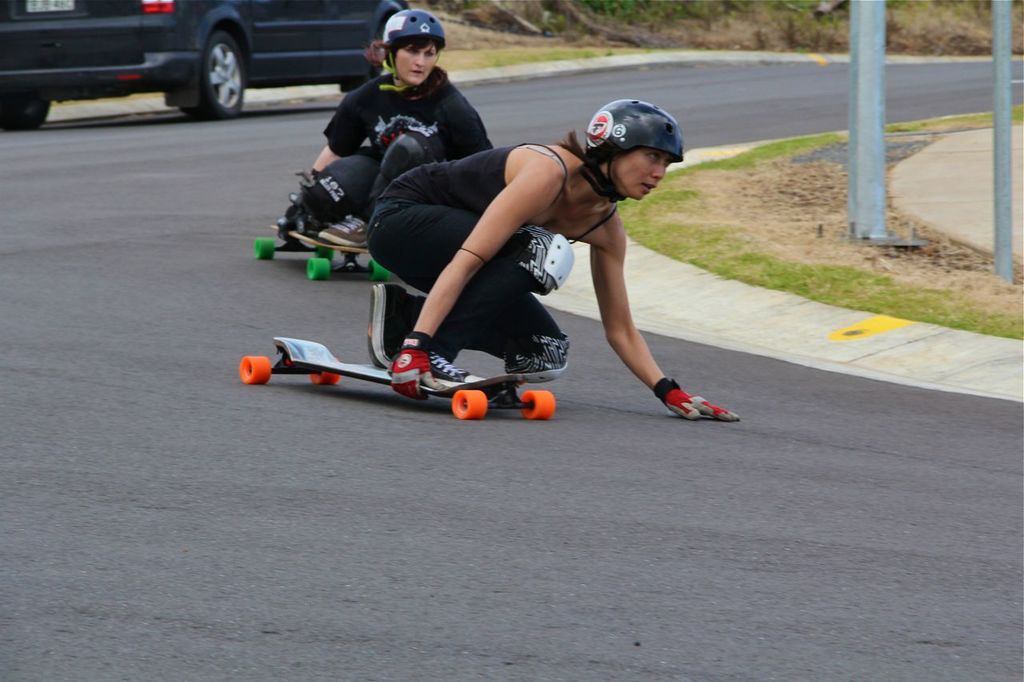 Mel ''the gun'' Pope and Rat ready for the straight away

We opened with groms and girls races, it had been raining for weeks and this was the first blue sky we had seen, it looked like rain was on the way but the opens would have to deal with that. the groms 16 and under were all super keen and the local kids from Byron had a tough race against the Qld riders,every race was heads down bombing, so rad to see them hunting the win with passion, this hill is definitely a big step up anything a lot of the grommets had even rode down so jumping on it and racing their mates is a good demo of how the skill is raising every time we hold an outlaw. After 5 rounds we had a finals ready including 3 Monkeypigs and 2 Byron shredders. The chicky babes were out in force and representing Byron by bombing hard and not giving an inch against some amazing talent like Rat and Gemma from up the coast, local girl Mel Pope would smash the top section and take the lead only to be drafted into the main right hander, Kate was riding on my Fibretec made some amazing passes on anyone in front of her but had a long breaking stlye and had to fight for the final positions, the junior girl Jemma was on fire and every one was stoked to see her riding in the open girls too. 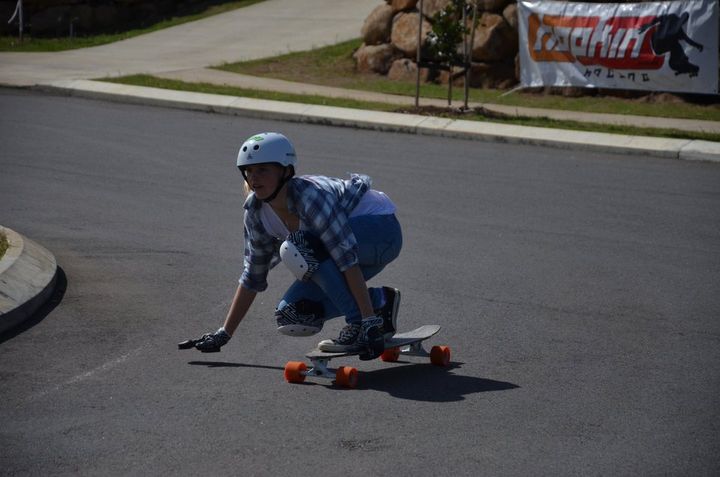 Junior girls champion Jemma was railing the corner like a pro

While the racing was going on we had a separate hill to thrash all day long, around 200 metres long and consistent pitch the hill was destroyed with thane lines as riders busted out long massive slides and the younger ones worked on their more technical tricks. 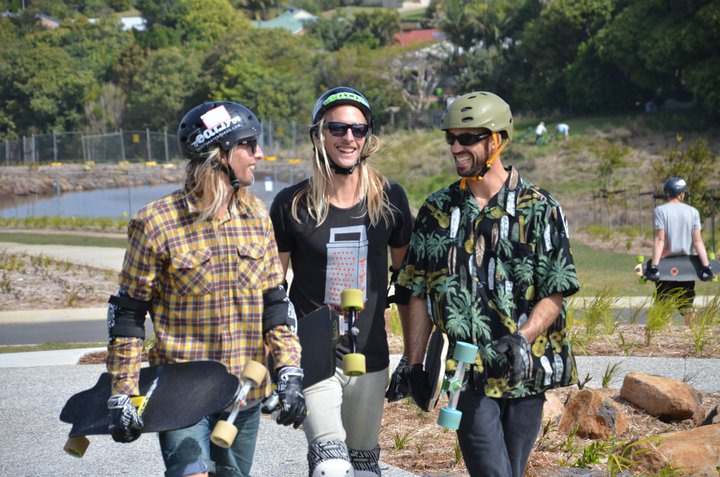 Spreading the stoke and having a good time, Jon, Seb and Kurt

We had a few late entrys into the opens and began racing with 22 riders, their were plenty of guns and surprises, and I was stoked to see a few local rippers get in to the finals end of racing, just about every race had a Brabury at the end, riders would bomb down riding hard and making a pass only to come in to hot for the final corner, wash out and end off in the grass while 2nd 3rd and 4th could cruize though or end the same, it made for some amazing action and spectators over the whole hill could watch the entire track. Local ripper Sol was on fire stand up style 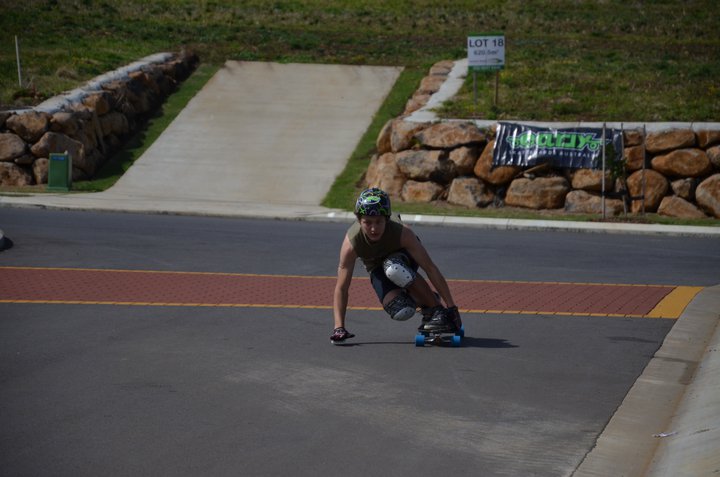 With the weather setting in finals were about to start, Jezza, Mike English, Jaidyn and Dan(Bryon bay) lined up as the crowd lined the track to support them, the first corner is dropped on left hand side and is like a boost if you pump it while the right hand side is a straitline though the s bend, the 4 riders all crammed onto the dipper to pump as much speed possible, they went 3 wide around the first left and Jezza found him self just behind mike onto the staight, while Dan and Jaidyn battled it out for 3rd, every one used the slight headwind to only slightly brake and rail the right hander, everyone was waiting for the hairpin that claimed so many leaders that day, but English held his shit together and Jezza followed him around for his first podium finish in 4 years while English took his first opens victory, Jaydin beat Dan to the line but were both stoked to have been racing in the finals on an epic day of racing.

Hop is like "Damn that kid's fast" and old mate's like "Damn is that Hop, I gotta get a photo". Oh yeah, English rips...

We held the podium on the slide hill, the rain would come in and dump a load then the riders would go smash it out sideways till it dryed again, local maddog Shimo had broken 2 longboards in as many weeks so ive passed on Manchild's Avenger for him to shred, he would tuck the whole slide hill then bust out combo pendys at high speed while slide champions the Lundmark brothers went head to head blowing the kids away with the huge bag of tricks. On ya English, Jezza and Jaydin 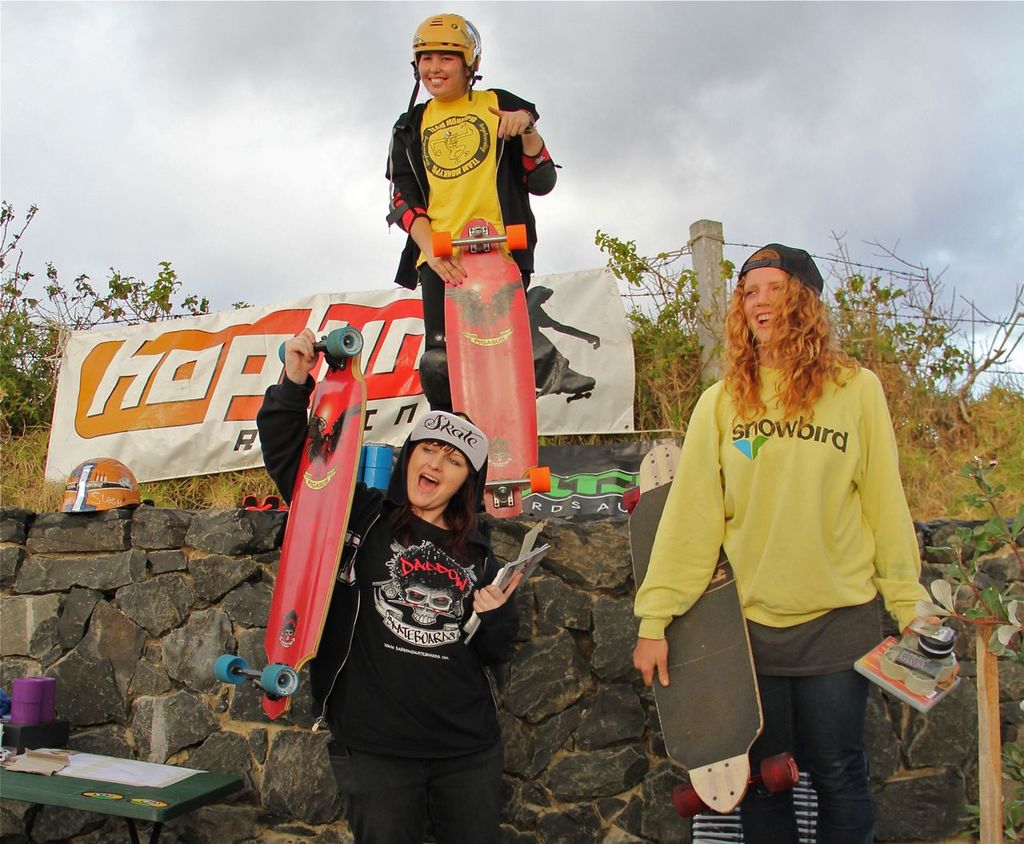 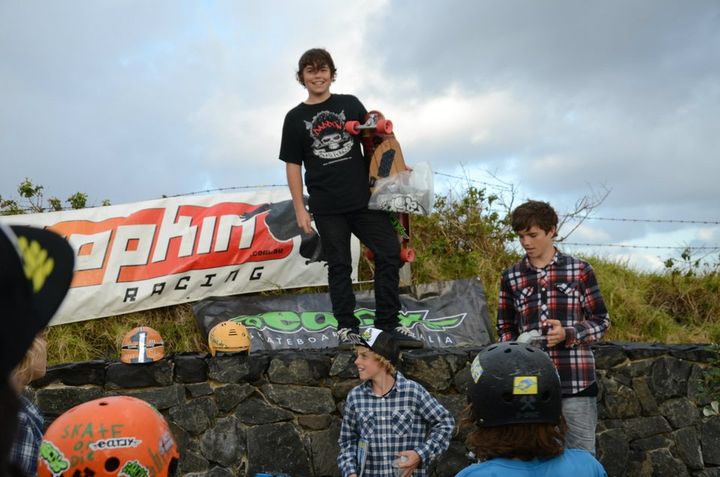 Thanks to all the riders and helpers on the day, parents for supporting the sceen, sponsers for providing prizes and incentives, local land owners for giving it the all clear, photographers for capturing the event. Monkey Pig, Jamie for race marshaling and being a sic clint and Daddow for bringing a bus of Radness down, James Hopkin for backing our sport myself and Maga in all our events over the year. Thanks Maga for everything, she's a vital part of our crew and has done so well getting the chicky babes up and racing.

Cant wait till we get back from OS to come to another local outlaw, then hold your own!!! Start small and grow your local scene, its easy and ASRA has everything you need to do it properly. 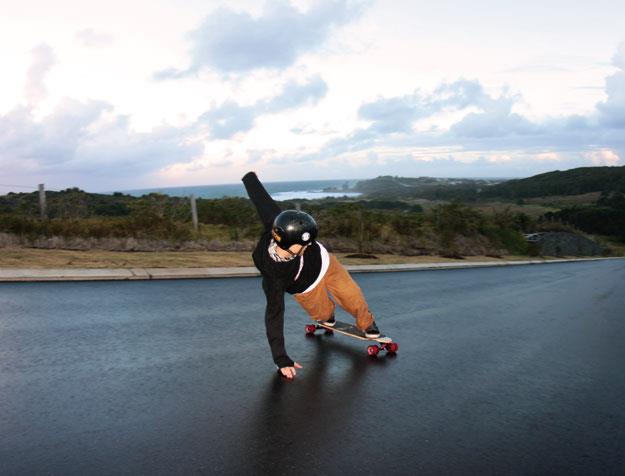 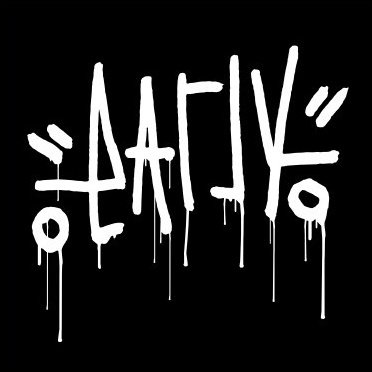 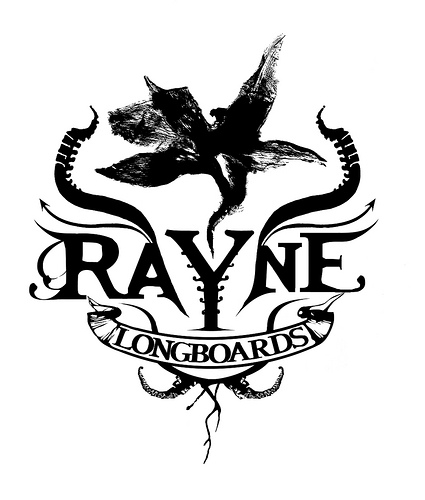 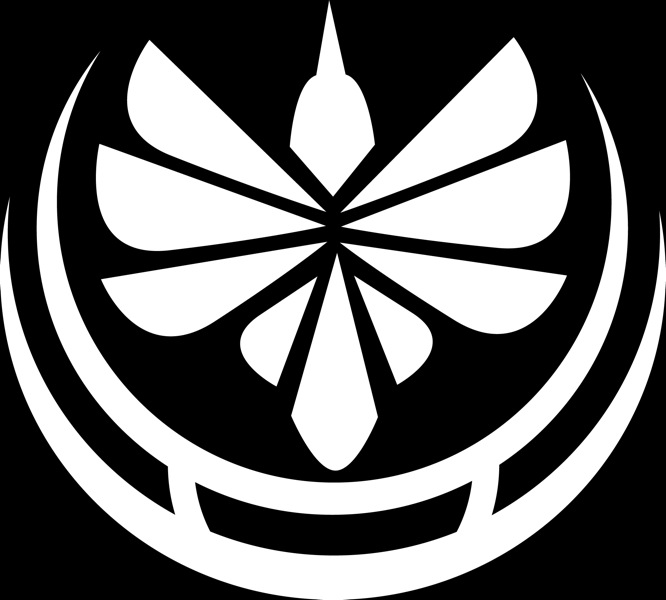 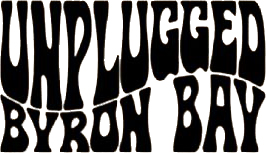 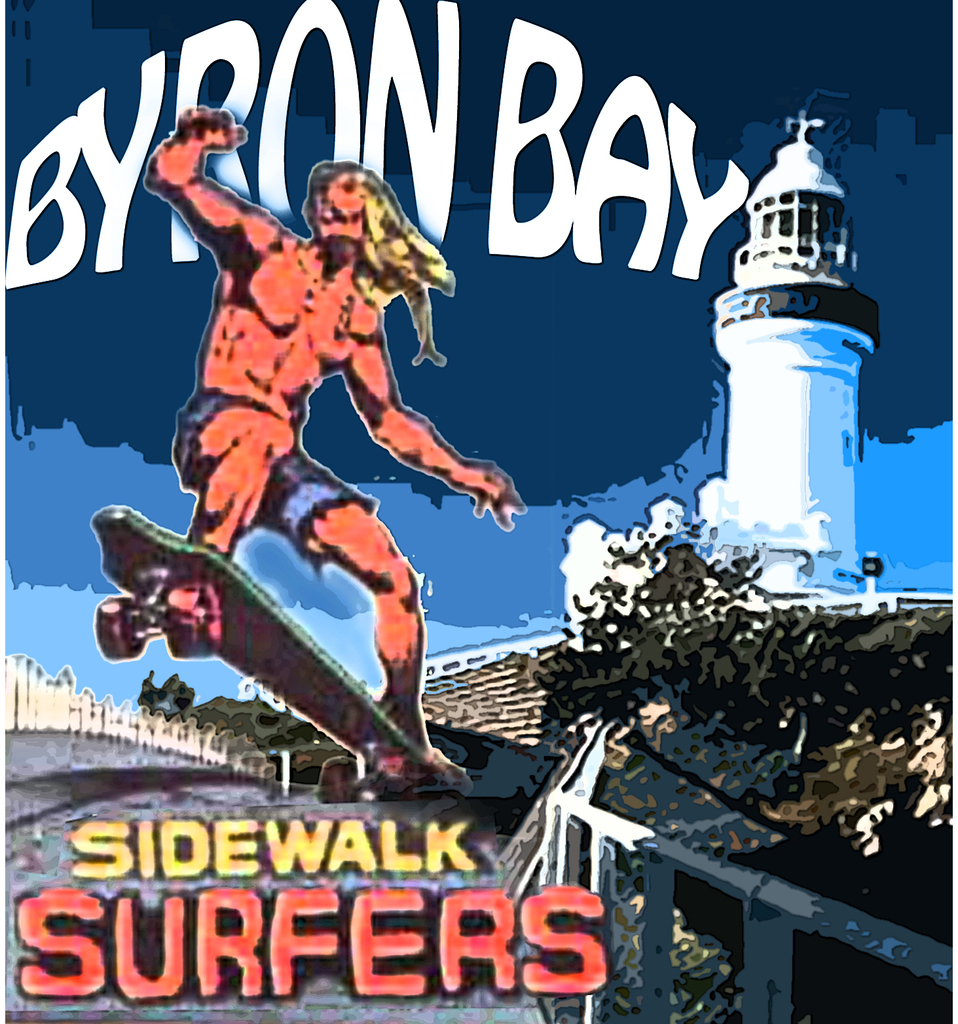 Rad write up! cheers for a awesome event.

Hey Rob, that is so cool..everything - organising the whole thing, doing such a great write-up, and especially seeing you back on a board again. Hope you and Maga have a great trip. Cheers...

Nice write up Rob!
Jaydos do up your new TSG helmet man!

hell yeah, great article rob! what an amazing crew !!! so proud to know you all and see you shred more and more!

will see you on our farewell skate and party!!!!

Great day out thanks Rob and Maga.Congrats to the Daddow/Monkey pig crew for taking honours in each of the finals. Great to see Early Jezza on the podium as well. Sweet ride and board mate.

P.P.S Rob I think i left a bag or tent pegs that we used for the tarp. Don't look to hard a may have just thrown them in the shed.

Thanks for the awesome day!  Such a good track!