Last Monday, in the early hours of the morning grommets and top riders from as far as Goldie down to Canberra converged on Clifton Gardens, Sydney, for a short but tech race, starting up in suburbia the track winds and dives down 2 hairpins and few sweepers ending next to the beach. With perfect weather and heaps of volunteers the racing began early and finished before 12 with a everyone stoked-out and riding better and better.

Jacko rocked up with a new Camera rig we have been workin on and encouraged all the groms to go faster and harder, while Yates and Benbro had their first runs on the hill pushing out hard and attacking the course. It was awesome to have six girls competing and in practice they worked hard to dial the course, learning from Maga and Lea and finding their groove. 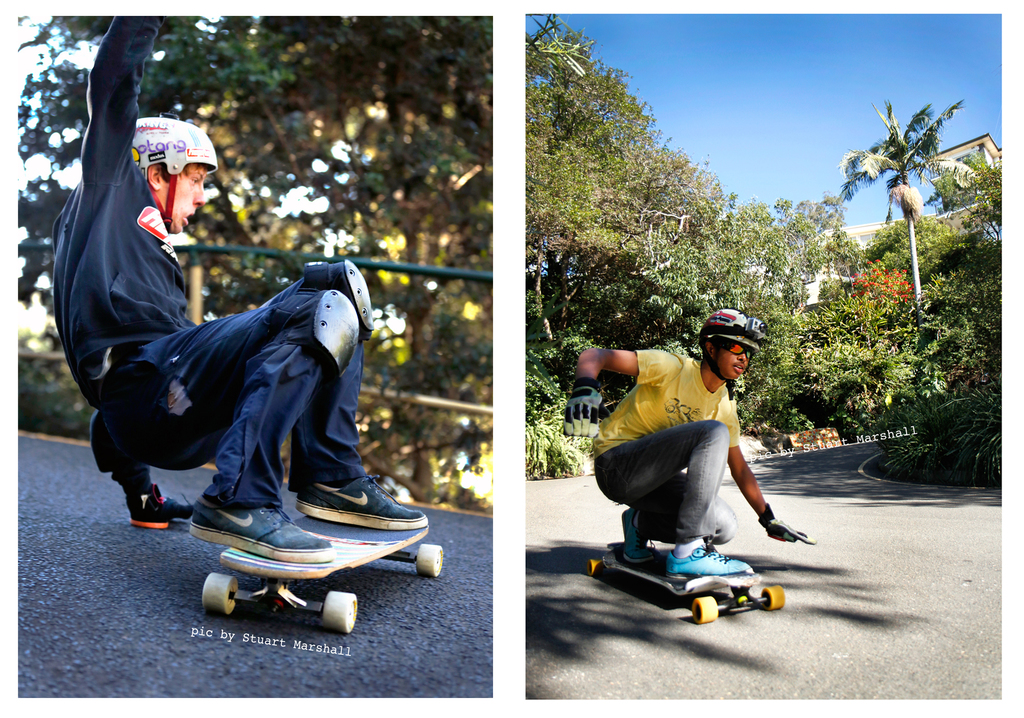 Kam and i had a few easy runs at the top of the heats, matching up with Chad and Owen later on, Owen and i had been getting in practice over the last few days working on the course and safety aspects, Owen knew he had a better line on the final corner and was happy to wait till then to make his move, but before he could Chad took an inside line into the first corner, riding freerides he lost grip and slid across Kam’ss leading line, i snuck through and so did Owen. Mean while Yates and BenBro where taking names and met up in the finals, knocking out Jack Glen and Merrick and leaving them to battle in the consi. Mezza was on fire and pumped down the track to make up for his mondo mongo stiff foot push, taking riders on the inside and holding his line around the last corner.

The finals where Yates, Ben, Owen and myself, all ready for action and able to rally every corner, benny pushed out first and i slipped in behind him as we gripped the first righty under the tree’s, i felt a bump and it must have been yates getting in close behind too as we weaved the manhole cover and lined up the first drift into the top lefthander hairpin. We followed each other around the corner in line, one after another only inches apart from the riders in front and behind. 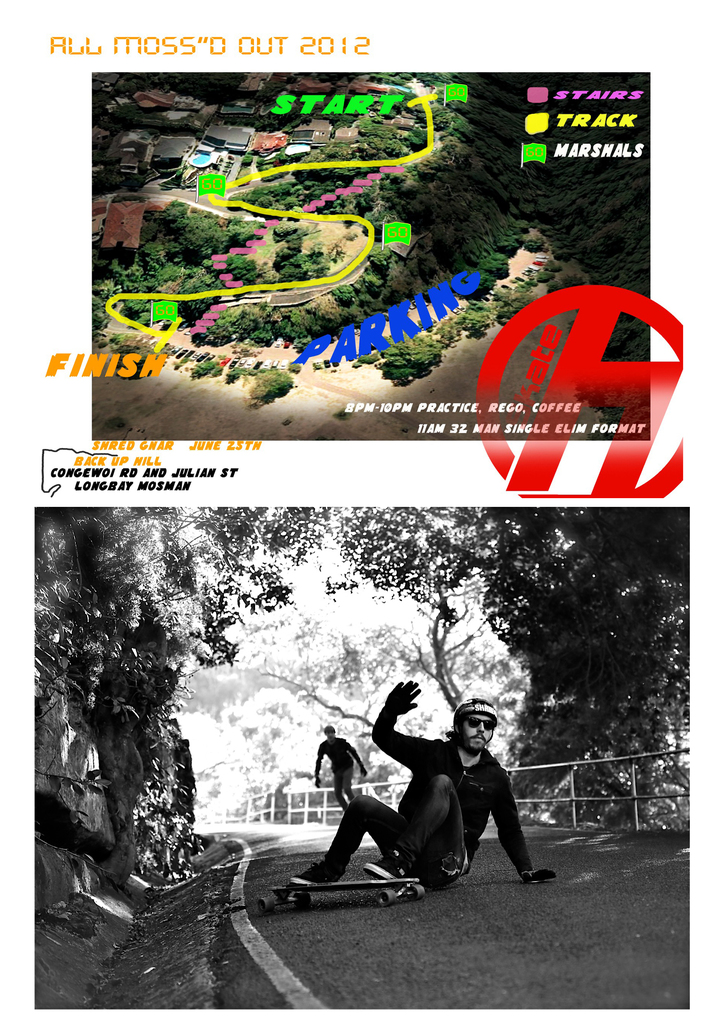 Owen all murdered out

The right hand sweeper was designed with slalom cones to push riders out a bit and encourage a little drifting but by the finals we were all gripping and ripping it, BenBro took an inside line while i went wide to line up the final corner, yates and owen shuffled in closer while benbro pulled in front a length or two. We all dove in to the last left hander hairpin and benny looked set to rail but drifted only inches off course onto the rougher pavement and continued to drift out , i stayed pitted on the inside but could hear Yates getting rad right next to me, then smash crash bang, Yates lost his puck, owen dove around him and benbro hit the gutter, in a spilt second 2nd place was up for grabs for the fastest runner to get their boards and benbro just pipped yates on the line. Owen was stoked with 4th and i was heaps happy with first. 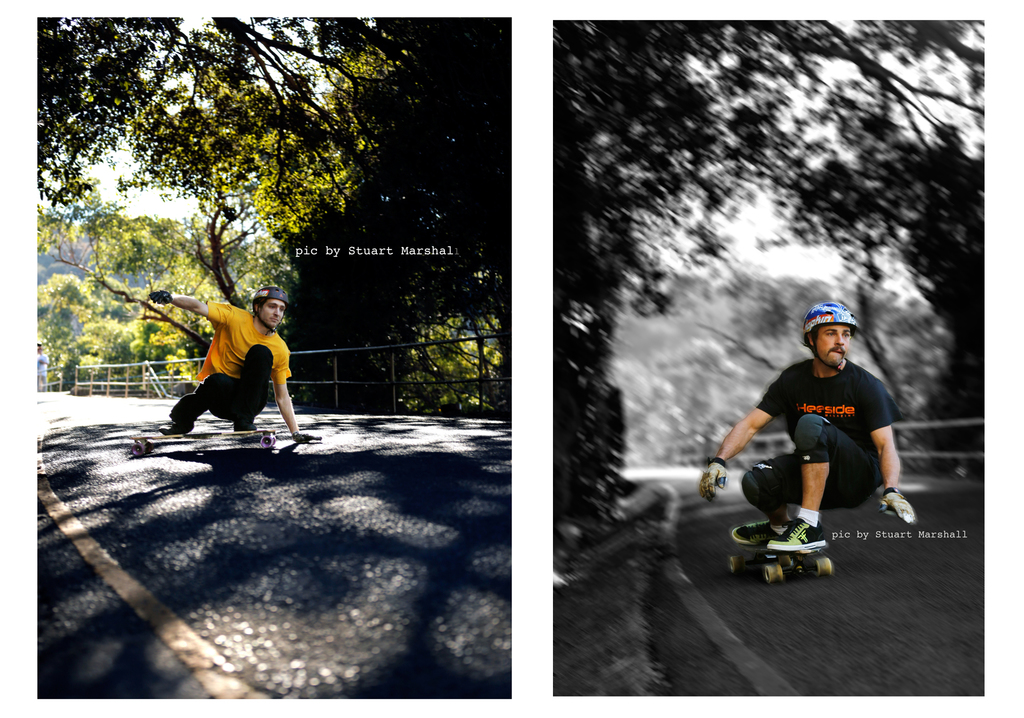 We ran a freeride for an hour while we had marshals out and the girls round up their round robin race with Lea Robertson taking 1st Maga 2nd and Evie 3rd, meanwhile council turned up and had a yarn, they where stoked on the kids having fun and no rubbish being left around then the cops rocked up, chilled out and left after watching a few runs, they thought it was great, they mentioned it was a legal road and were happy with our marshaling system, young grommies where walking around picking up rubbish and families where playing in the park, pretty girls in helmets skating and everyone smiling, would have been hard for them to find something wrong with the event.
Thanks to HOPKIN, robbo and hop, you guys support our scene in every aspect, true stoke peddlers thanks for the equipment and prizes, cheers FIBERTEC, thanks for the boards and supporting our Aussie Scene from the other side of the world, cheers jackoi and all the gromies for filming the event , stuart marshall for the amazing photography and maga for helping organise, all so the boy on the radios, TRAV and RONNI you guys did all the hard work thanks again, see you all soon at shred the thread for more outlaw raddness.

rad write up very cool race, we need more well run races like this one.

where can we get acess to stuart marshals pics?

such a cool race, so stoked. thanks rob!