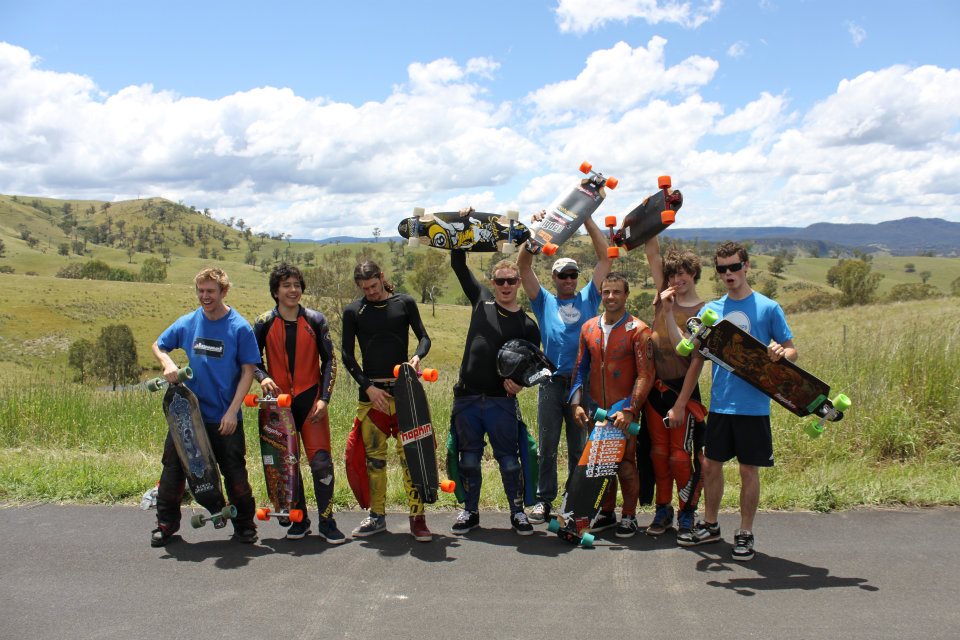 The Wild WIld West Outlaw was a huge success. So stoked to see heaps of riding coming out and stepping up their game. I saw a huge improvement in a lot of riders, the biggest of which was Shane Dennehy. He's been in the scene for a while now, quitely popping up every now and then but this weekend i really saw him stepping up and charging. There was also the likes of Jack Glenn. Super stoked to see him getting in the mix with everyone else. The amount of grommets that rocked up to this event was crazy, a whole bus load! There was also the likes of Adam Yates and Josh Evans from Queensland. It was awesome to see Yates back on his board. The top 8 was a big surprise, the darkhorse Shane had made it in and so had Josh! It was rad to see Josh win the consi with Yates close behind, and i think the most stoked person there was definitely Shane. There was so much improvement in all the groms, for most of them it was their first tiime racing in the wet. Best outlaw event , EVER! With rain forecast all week it looked like The Wild Wild Wet-st was going to be.....Well.....Wet. Surprisingly everyone was keen to race and the rain wasn't stopping anyone. After 2 Mega chilled practice runs it was on. The hay on the righty had no shortage of customers, serving hay sandwiches all day and the boys were always hungry. Not 4 heats in and the sun comes out, I've never seen a road dry so quickly. Every heat got faster and faster and by the time we hit the semi's it was bone dry. Wet and dry equals stoke pie and everyone had a slice. Rad to see no one bitched it everyone manning up to shred the wet.

The wild wild west race was a huge success,smoothly executed and well organised.

Initially rider numbers were down and skaters were slow to register in advance,possibly reluctant due to previous events not going to plan due to various issues including organisation and format.

Thankfully the voodoo was broken and the return of super stoked faces was a pleasing step in the right direction for skateboard racing in australia.

It was an enjoyable relaxed day of racing for the 29 competitors plus volunteers and spectators involved.

Our sport thrives off stoke and a community of passionate people commited to banding together to bring us skateboard racing is essential.

The main volunteers were on the hill early,including the event organiser,jacko shapiera,who had positioned the haybales accordingly for the wet conditions.

The track was ready to race,the riders geared up and the race briefing was done.

Track marshals were briefed and put in the required positions along the course.

Haggy took control of the finish line and trav owned it on the start line assisted by lea robbo,who kept the skaters under control and organised into our next heat as soon as we were off the bus,wich i might add was driven by Pip shapiera,was a great job from pip as he knows how to steer the groms in the right direction with minimal amounts of abuse.(amazing).

The race ran like a well oiled machine,the only hold up being when the track was shut for ten minutes as farmer brown crossed the road with some cows.

It was an enjoyable day,with the volunteers totally dialled on their job at hand,racers were able to enjoy it with a relaxed vibe and get on with having loads of fun.

This race really showed that well organised outlaws are vital for the sport to grow and prosper.

It really renewed the faith of some of the newer skaters who have had an unfortunate and drama filled introduction to skateboard racing.

Huge thanks go out to the following people,on behalf of the skaters we would like to thank-

Pip shapiera,for driving the bus and being generally a rad dad and getting the groms to the hill.

Haggy,Trav and lea for doing what asra does best,running sick races.

Bugs and robbo for keeping punters updated at home.

Everyone who came out to the secluded hill to either race or chill and film,and spectate.

last but not least,Jacko!for organising the whole thing and allocating the required duties to the best in the biusness.

hopefully i havnt forgotten anyone,stay stoked and see you at the next one.... 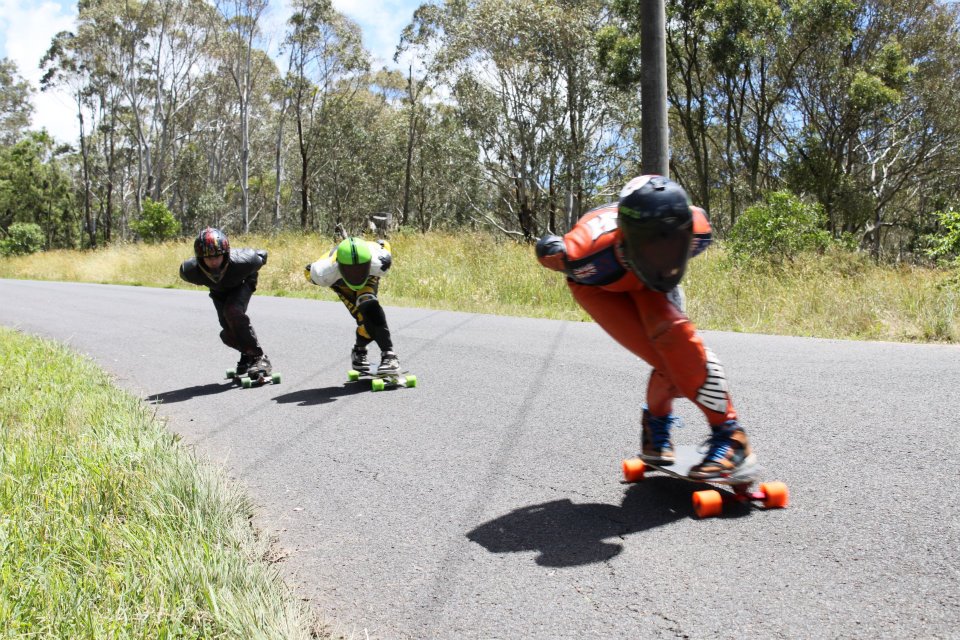 All in all i could not be happier with how the day went. Everyone knows that organising events and putting on a race is no easy task, be it a small time outlaw or a world cup event there are always many things to factor in to make sure it all runs smooth, but the most important aspect of it all is team work. We were all blessed with the help of key ASRA members and friends/family that all pitched into make something like this come together. Having a strong team working well with each other and communicating means the day will run super smooth, and thats exactly what we had.

A lot of people had made the journey from far and wide to have a crack at the Wild West, most people had no idea what the hill would be like or what the conditions would be like, but they all lined themselves up ready to go. Given the weather forecast it was pretty certain we were in for a wet one, so i think many had time to prepare for that. I had made the decision to add haybails onto one of the more critical corners were people were destined to crash in the wet, and it was obviously a good choice as many skaters (including myself) got a good taste of the hay.

With haybails set and many course marshals lining the track securing it from on-coming traffic, we were pretty safe to rally down the hill at full race mentality. It was epic to see so many people give it a shot and take on the slippery conditions. With a solid crew running things smooth and a very fair racing format we were able to squeeze in a lot of track time, im pretty sure we managed to send down 50-something heats and have the race all done and dusted before 2.00pm!

Big thanks go out to all those who put in a helping hand: Haggy, Trav, Lea, Mtn Mick, Pommy Josh, Jarrod, Sidecar Nic, grommets Sam and Matt, My dad for driving the bus, and all the sponsors who helped make this event happen and helped out by donating mega schwag for all those involved: Hopkin Skate, Shredders, Daddow and Sector 9. 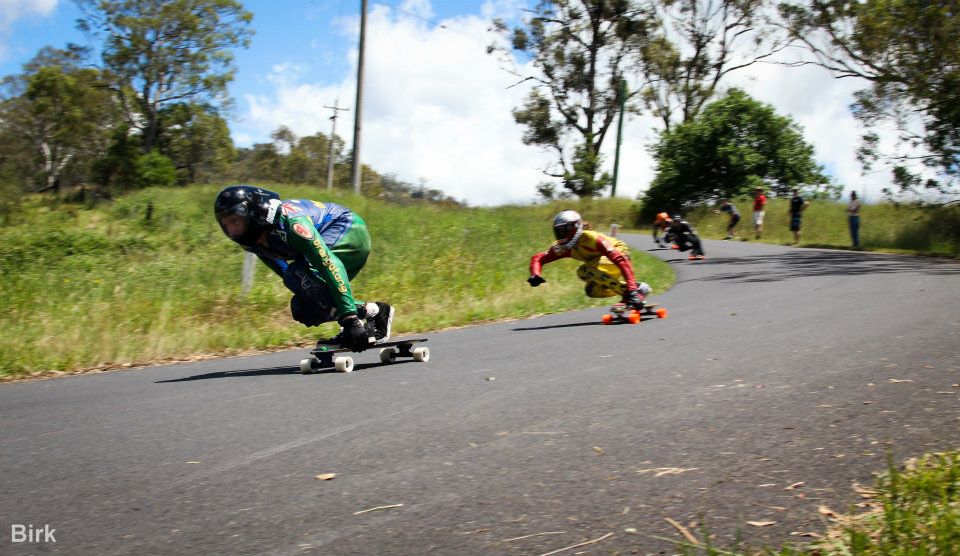 never been to a better run event.
It was like a brand new wheel, perfectly smooth

Yew nice write up guys! It was an awesomely smooth event..and go Shaneo you sicko keep smashing it up!

cheers for the haybails... i think i spent more time in them than on the track

Had such a great time. Well worth trip from Melbs.

where is the road?