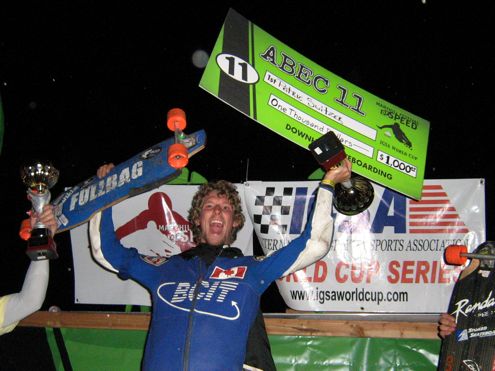 
Goldendale, WA, USA - On a day that must be considered the craziest in the history of the IGSA, Patrick Switzer battled the elements to win the 2009 Maryhill Festival of Speed. Throughout the day, the weather was constantly changing from sunshine to strong winds to pouring rain and back again. This cycle occurred no less than six times through the day. Douglas Silva from Brazil finished in 2nd and James Kelly was 3rd. Rounding out the top six were Nathan Lang in 4th, Mischo Erban in 5th and Scoot Smith in 6th. 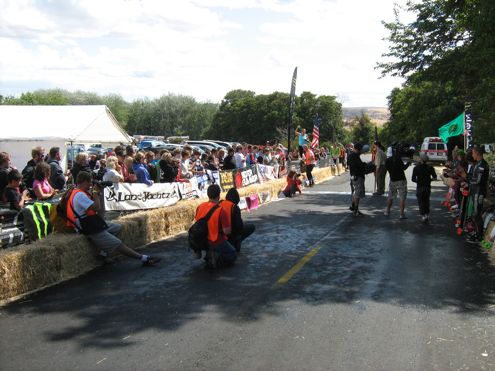 A good crowd was on hand for the Top 12 rider introductions. Photo John Ozman


It had rained off and on during the morning racing classes but the weather forecast predicted improving weather conditions for the afternoon. The sun was out and the track was driying during the introduction of the Top 12 qualifiers. While the riders were at the top awaiting the first round heats, a strong wind blew in followed immediately by a heavy rain shower. The first round of racing was held under very wet conditions. Then it stopped, the sun came out and the track dried again. This ended up being a cycle that would continue throughout the afternoon.


By the time the race came down to the Semi-Finals, it came down to the veterans versus a few of the young lions. In Semi-Final #1 it was Mischo Erban, Scoot Smith, Alex Tongue, Frank Uhlman, Patrick Switzer and Tim Delrosario. Shortly after the start, Scoot was in the lead but crashed and fell to fourth. He quickly picked himself up and began pushing like a crazy. Erban, Switzer and Uhlman had passed him so he put his head down and took off in pursuit. First he was able to get passed Uhlaman. As he exited Seismic Cowzer Corner he had Switzer in his sights and was gaining fast. They rouded the last corner and he somehow managed to make the pass. At the line it was Mischo, Scoot, and Switzer who were going to the finals. Uhlman, Tongue and Delrosario finished in 4th-6th respectively and were headed for the Consolation Final. Delrosario had crashed hard in the heat injuring his ankle. 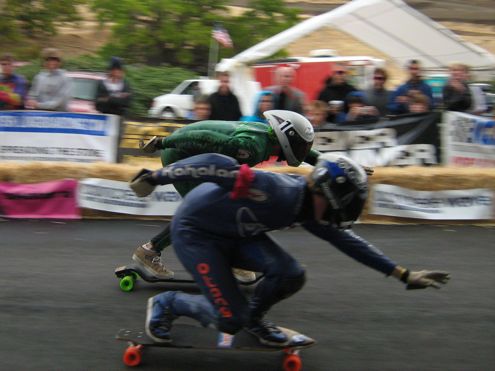 Smith managed to get by Switzer in the last few centimeters before the finish of Semi #!. Photo John Ozman


In Semi-Final #2 it was Kevin Reimer, Nathan Lang, Louis Pilloni, James Kelly, Douglas Silva and Zak Maytum. At most races around the world, this line up of riders would be a dream final but this was only the semis! Silva pulled out in the lead with Reimer close behind. Reimer had him in his sights but then crashed hard at about the halfway distance dropping to 6th. Zak Maytum then inherited 2nd place Kelly 3rd and Lang moved up to fourth. In Seismic Cowzer Corner, Maytum crashed and he was passed by everyone. At the line it was Silva, Kelly and Lang going to the final. Pilloni, Reimer and Maytum went to the Consolation final.

Scoot and Switzer relaxing under a tent and mingling in the break before the finals. Photo John Ozman


In the Consi-Final it was Uhlman, Tongue, Pilloni, Reimer and Maytum. Delrosario dropped out due to his ankle injury. It was another crazy heat held quickly darkening conditions since the event had run late due to the multiple rain delays. With multiple riders crashing in different corners it was a crap shoot. At the line it was Pilloni taking the win and earning 7th place. He was followed by Maytum, Uhlman, Tongue and Reimer respectively.

Mischo was really looking like the rider to beat until his dream fell apart in the final. Photo John Ozman 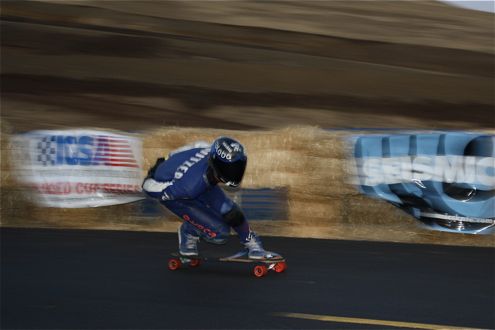 
The final lined up with Erban, Smith, Switzer, Silva, Kelly and Lang. Mischo and Scoot took off in the lead and looked set to battle it out for the win until they both crashed at the halfway point. There would be no victory for the #1 qualifier and current points leader or the two-time defending Champion. Silva was now in the lead with Switzer and Kelly in hot pursuit. As they made their way down the straightaway headed for the final corner, Switzer passed Silva. Kelly was also on his tail but couldn't find dry enough pavement to make a pass. That was how they finished with Switzer earning his first World Cup victory. Silva finishing an amazing 2nd in his first ever rain race and Kelly in third. Nathan Lang finished in 4th with a dejected Erban in 5th. Defending Champion Smith finished in 6th. 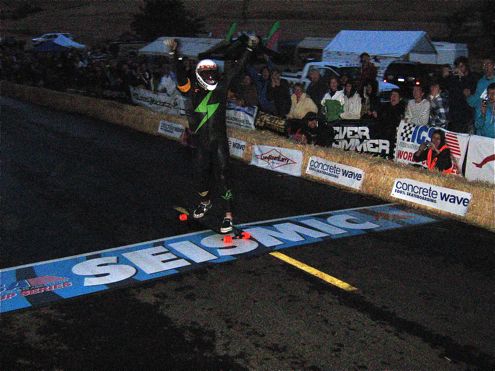 Douglas Silva was elated to finish 2nd in his first ever wet race. Photo John Ozman 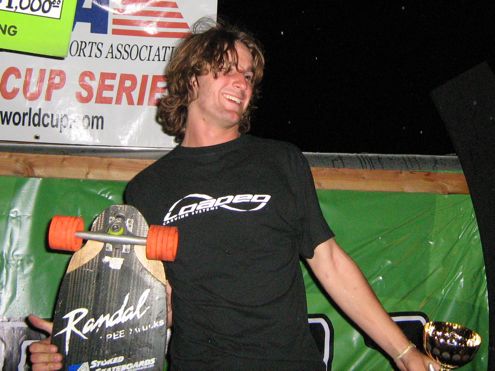 Also a great year for him,.. and Fullbag.
I bet both Landy and Rayne want him.

Premium Member Comment by Stephen Daddow on September 7, 2009 at 21:04
Nice one Switzer!!! Your one of my Favorite Skaters at the moment !!!! Kick ass man !! Good riding all the Aussies !!!! See you all at home and the rest of you guys at Bathurst

Comment by Gilbert on September 7, 2009 at 23:57
i have no idea how he races with the elise, its tiny! but yeah switzer shreds in all the videos of the races i've been watching.

Comment by Ash on September 8, 2009 at 8:57
its not that tiny, on full length wheel base its just shy of my top mount, and can be shortened about 1 baseplate shorter wheelbase.

awesome job to all the aussies aswell!

Premium Member Comment by Grits on September 8, 2009 at 13:36
Congrats to Leeso and all the other aussies!
It's awesome that you made the journey to mary hill!

ASRA Admin Comment by Bugs on October 14, 2009 at 13:05
Some pretty good press for Patrick Switzer:
http://www.bclocalnews.com/greater_vancouver/burnabynewsleader/news...

"Patrick Switzer has come a long way since his first longboard race.

Also called downhill skateboarding, the sport was still relatively new to Switzer, who didn’t know how the qualifying rounds worked.

“I went to get a hotdog and missed my heat and I was out,” he smiled sheepishly.

Today, at age 22, he’s currently No. 1 in world cup standings, according to the International Gravity Sports Association (igsaworldcup.com).

Switzer is also a mechanical engineering student at B.C. Institute of Technology, which helped sponsor his past summer of competitions in Europe."