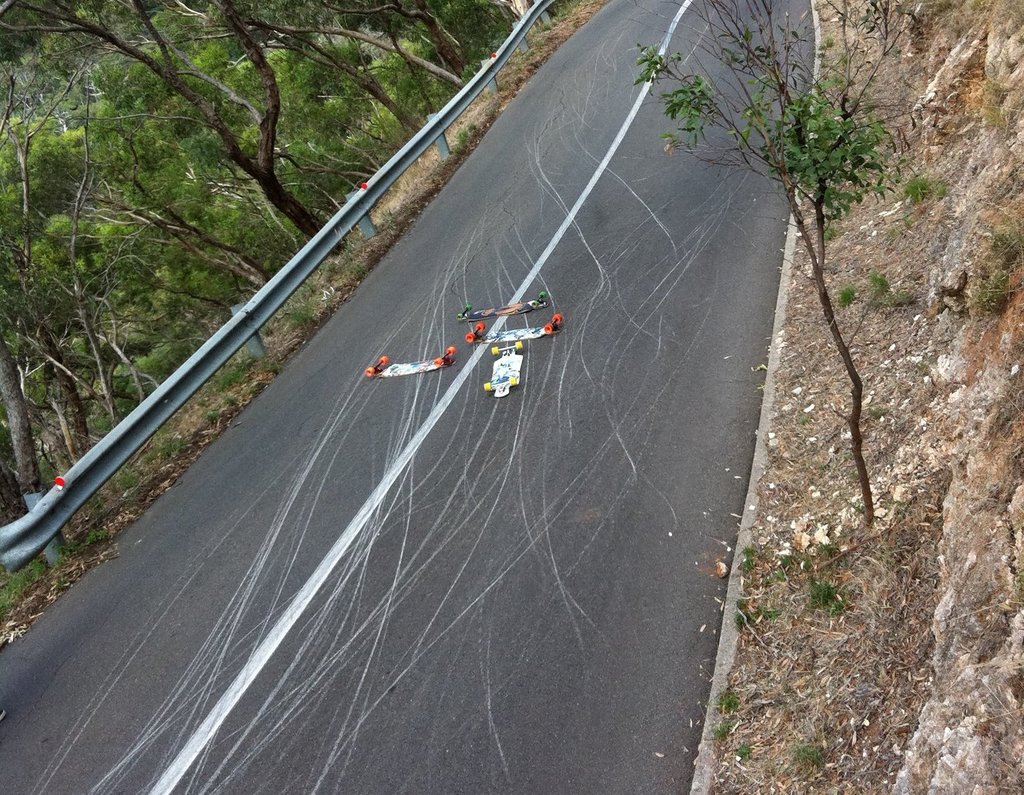 In 2010, Radelaide's first outlaw was held on the bottom section of Eagle on the Hill. With about 30 riders on a road which is divided from oncoming traffic, the race was over quickly enough that a second race could be run at a different location afterwards.

This year was a little different. Eagle on the Hill is now a hot spot for police and our scene has exploded in numbers over the past year, so we knew that this years outlaw would have to run a little differently. 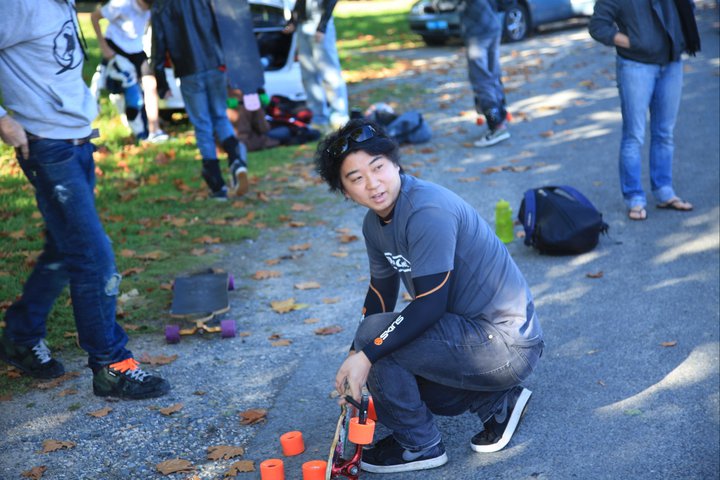 Over the course of Thursday and Friday our interstate guests started flying in and they only had one thing on their minds - skating. For people like Tim Day and Merrick Wildash who hadn't been to Radelaide before it was a race against time to see and skate all of the roads they had heard so much about. On Saturday morning a last-minute Chinese downhill race was organised at Eagle on the Hill. At 11am after a big breakfast at the 24-hour Pancake Kitchen we made our way to Eagle to be greeted by over 30 kids all eager to ride down the hill with some of Australia's and even the world's best riders.

Everyone who raced put $5 into the pool. It was all down the hill at once, first to the bottom takes the money. By the end of the morning we did two runs down Eagle, weaving our way between the hoards of kids on the road, drafting and stealing speed from everyone we caught up to. Jackson Gnarsteeze Shapiera took the money and leaving large amounts of stoked kids behind, we moved onto some of Radelaide's most well known hills. 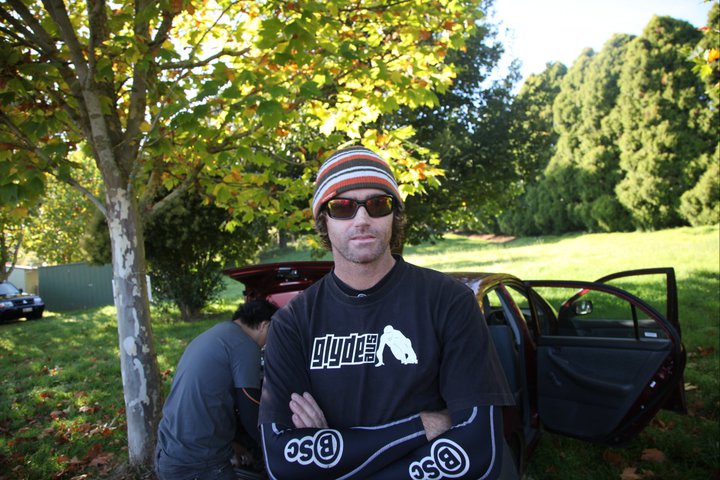 Sunday morning was race day. We were expecting 50 odd riders to attend, as well as over 10 volunteers and a butt-load of spectators, family and friends. It was a hell of a lot of people to co-ordinate, especially when you are running an event which is in a grey area legally-speaking. Most of the day had been planned out; we knew where riders would gather, we knew the volunteer's positions and roles, and throughout the day we only had to work out the kinks.

As expected, after the first round of heats the fuzz arrived. Once our finish line marshal called out ''cops'' on the radio everyone bailed into the surrounding scrub and the hill was empty. Over 60 riders, marshals and spectators all disappeared without a trace to leave the police driving up and down an empty hill. Once they were gone, we gave it 10 minutes, got everyone back in position and we were back on track. We managed to get the second round of heats done and just as the third was about to begin the police returned. Once again everyone bailed leaving the police with an empty hill but this time they knew that something was up. They hung around the surrounding roads checking number plates and car contents of vehicles moving around in the area. The jig was up. We were left with no choice but to move the event and finish the remaining 3 rounds at another location. With much discussion and differing opinions it was decided that we would risk running the rest of the event at Eagle on the Hill where the first outlaw was held. With only three rounds remaining we were semi-confident that we could get the race over and done with before the police caught wind of what was happening.

Other than a slight scare when an ambulance rocketed up the hill with it's siren on, the race finished quickly and we were out of there. The presentation was held at Daily Grind's city store on Hindley St. With 1st place receiving $400, second receiving $200, third receiving $100 and even fourth walking away with $50 it was an extremely high prize pool for an outlaw event. Slippery Dips and Daily Grind kindly donated prizes for fifth through to eighth place and Rayne Longboards provided prizes for the fastest grom and our ''he's a good grom'' category which went to Jasper ''lost ma tooth'' Marshall. Merrick Wildash came through with some goods too, with a set of Sector 9 wheels (which ended up knocking some poor kid out) and a good-as-new Lacey board which was hidden in a nearby carpark for the kids to hunt down, fight and squabble over. Champ Merrick! The forever awesome Blackwood kindly gave us a HUGE box of his tee-shirts from www.completeradness.com which were very quickly claimed by various bodies. (I got the ''Good CLInt'' shirt Blackwood! Stoked!) 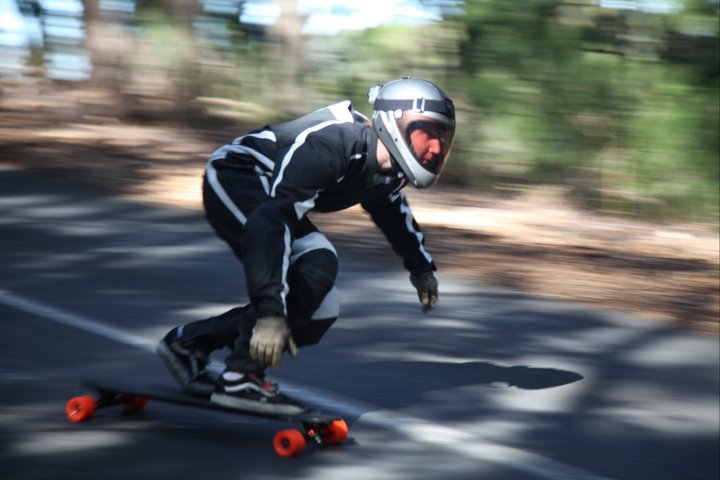 Over all the day was a success. With limited contact with any police, no major injuries, no media, no fined riders and no angry residents and a fun day of riding, organising and giving a crap load of money and gear away...what else could you ask for?

But the racing wasn't over yet! On Sunday night over a few beers and safety meetings, Merrick Wildash (2010 Junior World champ) challenged Jackson Shapiera (Australia's number one rider and top 10 ranked IGSA rider) to a race for board ''pink slips'' on Iron Bank Road. The ground rules were set. Each rider had to ride their challenger's set-up and the loser would then hand over his entire set-up to the winner at the end of the race. It was a close race, with Merrick's board getting ultra wheel bite even while carving, forcing Jacko to tighten the trucks up. Merrick had a lead of maybe five metres coming into the first and biggest lefty and he led Jacko on the exit of the corner. Merrick made an attempt to cut the next right hand corner but saw a car in the lane so was forced to dive back into the left lane. That was all Jacko needed to reel Merrick in and cross the finish line no more than a hands length in front of Merrick. It was all over. Merrick lost a brand new Sector 9 Brandy, a $200 set of ceramics, a new set of wheels, and a new set of Aeras. It was a fitting and hilarious way to end Radelaides 2011 outlaw racing weekend and after a few more hours of skating it was time to drop the guys off at the airport and bid them farewell...until next time. 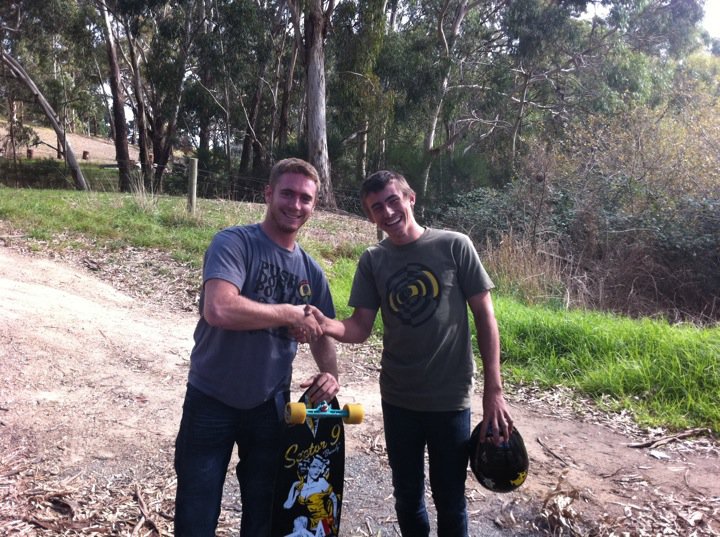 Right on dudes.  Sounds like a great event and nice writeup too Dani.

Stoked you guys pulled it off.  I am imagining the sight of 30-40 people scattering off the road into the bushes as the fuzz drives by, funny stuff.

Comment by Rayne Longboards on April 21, 2011 at 4:54
Stoked to be able to support! Thanks for organizing!

Premium Member Comment by Dani on April 21, 2011 at 12:37
Shoulda come down Matty, would of been rad to see you again! Thanks again Rayne. Will try to give you a bit more notice for the next event, haha.