Skateboarding in the News

Maybe the authorities need to know that this 19 year old could have been looking for thrills in a turbocharged car.

if you took the fine to court with there vid it would probably get tossed out hard to call it a near miss. maybe sa cops should book all push bike riders as every car they go past is a near miss. but i wouldnt do a run if there was a cop car half way down its bound to piss them off ,shit you dont need

These news stories make motorists more aggressive and therefore more dangerous toward us. I have seen motorists deliberately trying to hurt riders, and I have been chased myself by someone trying to run me down.

One day someone will be killed by a motorist who hates us based on the way we are portrayed in the media. The media will probably then run a news story that will confirm their argument that luge and downhill skating is dangerous.

The media should be a bit more responsible.

The law/police should adopt a more common sense approach. Look at how busy the road is,.... if the rider has safety gear,.... how many driveways are there on the stretch being ridden?

Instead of blaming everyone else it might be time for SA skaters to start getting their shit together and get organised.

On an individual level, scope out the runs before committing, and stop doing dumb shit like bombing freeway tunnels, and places where cops are most likely to be waiting for speeding motorists, or you, and after the latest effort, that will probably be bottom of most good roads in the Hills.

On a collective level, form a state sporting association and start working with councils and Sport and Rec SA to close roads, and have events.  With a compelling arguement to provide off-road events SR-SA might even sponsor the Collingrove race-track event that you can all be very proud of.

To get you some back-up evidence, think about talking a PHD student, at a University studying sport or social sciences, into doing a paper on change in skateboarding culture, and kids that don't fit the mainstream sport offerings.  Get another PHD student to do a paper on closing roads for sporting events.  Tour Down Under should have some reference data for the impact of closing roads, and if  bike riders can get their shit together......

Armed with research reports you can start to look like you know your stuff, (we got a council to lift a night skating ban at the local skate park, by using a report by a sound engineer on ambient noise, generators, and bert slides!  you will be amazed at the number of sound engineers who dig skating!)

On forming an association there is stuff you can get from the VSA website do get you started.  If you start looking professional, you will also have a better chance of being heard.  As a result of VSA-ASRA involvement in the Upwey Billy Cart race, we have been asked by the council to help them to deliver a closed road event...(stay tuned to ASRA Events).  The Upper Yarra councilors, and the local cops understand the growing need for longboarders to have an outlet, and realise that they are powerless to stop them, so want to work with people that act professionally and have a strong safety message....ie ASRA & VSA, to deliver controlled events.

In forming an association, feel free to ask em, but dont count on Skate Australia to provide any help, cause longboarders "are not their kind of people", and they only want ONE skating association in the country....but I could be wrong.....no...pretty sure I am right on that, and when I can get the embargo lifted on telling you all about the SA - VSA negotiations you will understand why.

Besides do you really want downhill to become like this little video gem from the nationally recognised governing body for skateboarding in this country.

Second thoughts, ignore my rant completely, and just blame all your problems on everyone else's exposure in-utero to Adelaide's drinking water, cause that never happened to any of you did it.

yeah thanks for that bernie

"There has been a call for something for kids to do in this area to combat graffiti and all sorts of anti-social things," Cr Kelly said."

next time you are busted for skating, explain that you are working tirelessly to combat anti-social behavior!

From page 14 of the  latest Financial Review Magazine

Judging by the copy, longboards are now another indicator of how suave one is! 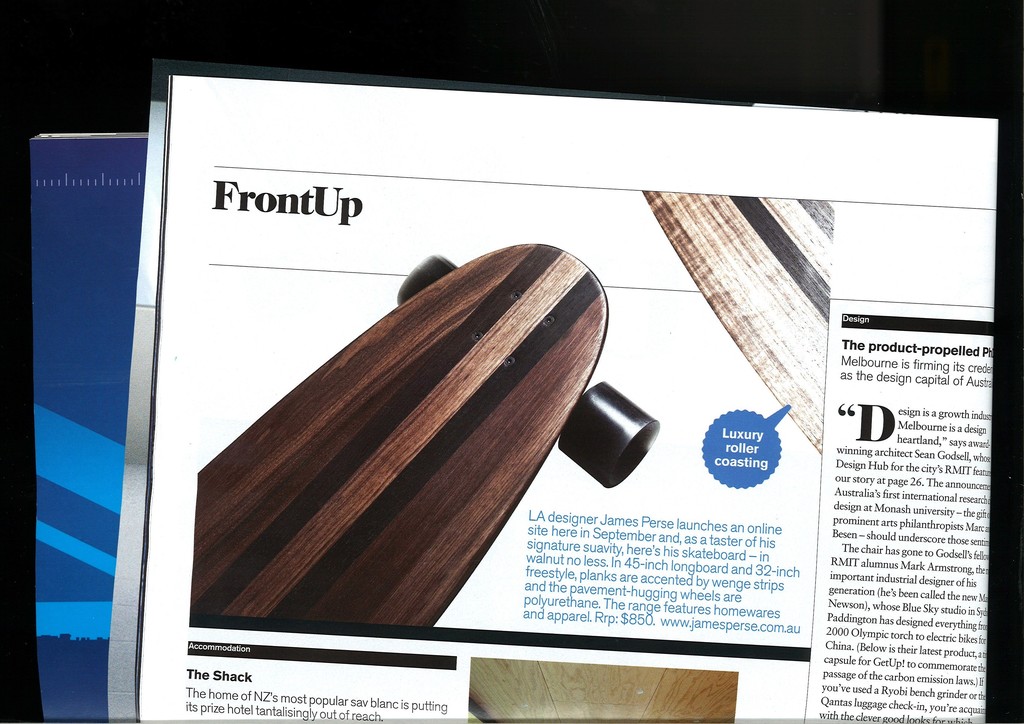 Snowboarder and Winter Olympic gold medallist Shaun White talks to Reuters about his hopes for skateboarding becoming an Olympic event, on the banks of the River Thames in London

Hardcore skateboarders underlined their distain for all things Olympic by launching an online petition urging IOC president Jacques Rogge not to recognise skateboarding.

"With due respect for Olympic athletes, we the undersigned skateboarders and advocates strongly request that the IOC not recognise skateboarding as an Olympic sport or use skateboarding to market the Olympics," reads the petition. "Skateboarding is not a "sport" and we do not want skateboarding exploited and transformed to fit into the Olympic program."

Who cares what skateboarders think anyway!

Yet another poorly researched, bigoted report from a journalism team with far to much time on their hands.

First thing I thought when that RAHD vid went up on ASRA: skaters crossing the centreline all through it = more fuel for SA's anti-skate crackdown. That yahoo video is no surprise.