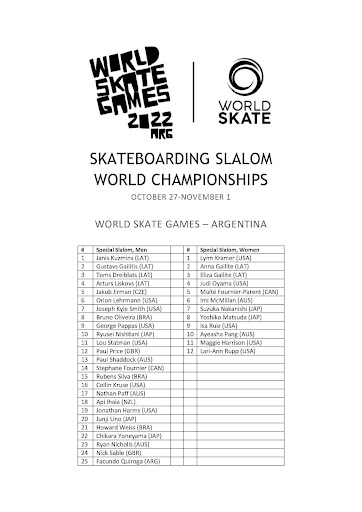 The Giant Slalom day. An exciting day, and a much-anticipated day of skateboarding particularly for GS connoisseurs like Ryan Nichols and Paul Shaddock. The final day of the Slalom competition brought us to a new location, Dique Punta Negra. A smooth, winding road next to the Punta Negra Dam. Punta Negra is also the location for Downhill Skateboarding, Street Luge and Downhill Inline competitions taking place on the 7-12th November. There was a lot of discussion in worldwide slalom group chats surrounding the length of the Giant Slalom course the night prior to the competition. Most riders were asking for it to be a long course, and some hoping for it to be short (and slower!). It seemed not even the organisers knew the exact length of the course.

Upon arrival at Dique Punta Negra, the track marshals and organisers were still setting up the course. Aussie Spirit shined bright once again as team manager and team coach Jack Meyn and Neil Duddy helped to add protection to the course and set up tents for countries to have shade for the day. The only issue being the start ramps positioned just above halfway of the straight at the Punta Negra track. After discussion with other riders, team staff addressed the organisers and expressed their concern about the lack of quality for what was to be a World level competition. There was simply too much smooth, straight, unused road behind the start ramps, causing the course to be shorter than expected for a lot of riders. The organisers agreed to move the ramps back. This was beneficial for the Australian team who wanted to taste speed on their final day of competition. Although the organisers didn't use the entire straight of Punta Negra, our riders were happy to have more racetrack to play with.

While the track marshals continued setting up, it was time for some final setup changes. Ish made some crucial bushings changes to her setup, whilst Imi opted for an entirely different deck to what she had skated on in the previous days, however remaining on her Fitzy trucks. Ryan, Paul and Nathan had spent hours the night before chopping and changing decks, trucks and bushings. It was great to see the entire team, including staff, provide feedback and help get the setups feeling great before the practice runs started.

Event organisers were kind enough to ask Team Australia manager and coach, Jack Meyn and Neil Duddy if they would like to be ‘freerunners’, offering the opportunity to ride the course to test timing systems, track quality and fill in time between timed events on the live stream. After days of watching slalom from the sidelines, of course, they stepped up and did their job.

This meant that there were 7 Australian skaters on the track. We also had our fellow ANZAC Api Ihaia from NZ to discuss the track and different techniques to possibly use. After the first run, everyone was stoked. Particularly Imi, who had some first-run nerves before taking her first run. Just like we all knew, she got through the course with speed, style and grace and didn't hit or miss a cone.

After 3 practice runs, it was time to begin the timed heats. Women first, and Imi being the first Aussie to step up onto the ramp and put a time down. By this point, not only did the girls have the Aus team cheering, but the majority of the competitors were encouraging the girls up on the start ramp. Something about that supportive Aussie spirit right? Much like her practice runs, Imi was smooth sailing down through the finish line after a clean run with a time of 34.450. The same head-to-head format was used for GS however there was not a dual course, with riders skating the exact same course and comparing times to their opponent on the spreadsheet.

Ish up next, who had only stepped foot (or rolled wheels) on a GS course once before. She showed no hesitation and got right into it, even getting low into a semi-tuck whilst weaving through the cones to a clean run through the finish line. Her timed opponent was young Maggie Harrison from the USA, who Ish managed to cross the GS finish line an entire 1.005 seconds faster.

For the men’s, Ryan Nicholls was our first Australian male up on the ramp in heat 2 of Run 1. His time was up against Facundo from Argentina. Ryan managed to get an incredible first time of 31.303, ahead of Facundo by just over 3 seconds. Heat 4 of Run 1 had Paul Shaddock on the start ramp, staring down the winding straight of Punta Negra. With a completely clean run, Shadow put a time down of 32.277, 0.89 quicker than his opponent Chikara from Japan. Heat 6 of Run 1 had Nathan Paff up against George Pappas from the USA. Nathan went hard through the GS and finished with a time of 33.611, just not quite being enough to beat George’s time. All our men had clean runs on the GS course and the location of Punta Negra seemed to be bringing in a crowd of locals to cheer on the world’s best at the GS.

The live stream was running and the women were up next for Run 2. Imi was on the ramp and her opponent to compare times had a second DNS. Imi managed to have yet another clean run and improve her time of 34.450 to a 33.688! She was getting faster and looking comfortable on the track. Ish was up against Maggie again, although 12 years old a seasoned skater hailing from Texas. Ish hit one cone however pulled a final time of 33.557!

The womens semi’s had a total of 3 runs, and this time a shuffled order so riders were comparing times to new opponents. Imi was up against Maggie and managed to get a faster time of 34.450 for Run 1, 33.688 for Run 2 and 32.587 for Run 3. Congratulations to Imi for pushing herself and showing it with her improved times all day.

Congratulations to all of our Australian riders for their incredible efforts, persistence and sportsmanship throughout the World Skate Games in Argentina and another congratulations for all of our opponents from around the world. An unforgettable week of skateboarding against the worlds best has lit a fire in the eyes of our Australian riders and we hope to see more slalom in Australia. 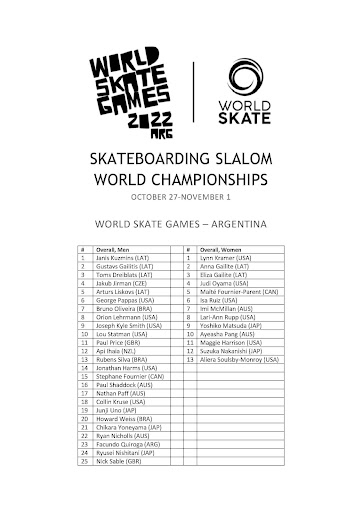