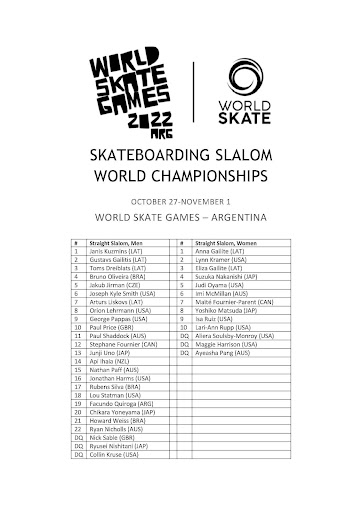 
Day 2 of the World Skate Games at the Villicum Race Track had Team Australia preparing for the Tight Slalom event. With 68 cones at 6-7 feet apart, our team quickly forgot about their sore legs from the day prior and got straight into helping set the course and lay some practice runs down.

With the same head to head format as the Hybrid slalom, riders were to go up against an opponent for two runs on each coloured course. The courses were identical in spacing and offset features, just flipped to reflect each side.

The Womens division went first, with our Ishy taking on the young Maggie Harrison from the USA in round 3. Unfortunately both girls were disqualified due to the maximum number of cones being hit. The tight was proving to be difficult, much different to the hybrid the day before in terms of spacing and the number of cones. Imi was up next, today going up against Isa Ruiz, another Team USA rider. Imi successfully crossed the line first, and despite hitting 8 cones towards the end of her run, she still managed to have a final time of 21.588, a tiny click above a whole second infront of Ruiz.

The 2nd Run, much like Day 1, proved to be challenging with the heat affecting the track surface and the riders eagerness to get through the course quickly. Unfortunately, all of the first 4 rounds of Run 2 ended in a disqualification by both riders. Imi’s result in Run 1 had luckily qualified her for the round of 8 that would take place later in the day.

Much like the womens round, there were plenty of disqualifications due to the maximum number of hit cones for the mens Run 1. Ryan Nicholls unfortunately DQ’d against Japans own Junji Uno in round 2, however it was Paul Shaddock in round 5 who laid a time of 18.487 down after hitting 2 cones, with his opponent Jonathan Harms from the USA ending in a disqualification. Watching Shadow complete the run without a DQ must have pushed Nathan Paff to go hard in his head up against Joseph Kyle Smith from the USA, but unfortunately after 9 cones hit, he ended with a time of 19.460. It was great to see the men battle it out in the challenging 1st Run, with 11 of the 26 riders ending in a disqualification.

Run 2 saw Pickles back on his game with a qualified run, hitting 8 cones against Juno with a final time of 21.611. It wasnt enough to take out Juno, but it was a stellar effort with the increased heat and track conditions for the tight slalom. Shadow and Jonathan switched results with Shadow getting a DQ and Johnathan finishing with a time of 19.173, 6.86 seconds slower than Shadows Run 1 time. Round 6 of Run 2 had Nathan Paff up against Joseph Smith from the USA again, with both riders completing their runs with 4 hit cones each, resulting in a win for Joseph by just over a second. The heat conditions did not get easier as the day went on with Run 2 resulting in 8 disqualifications. With 68 cones in total, and a very small spacing between them, even the riders who later podiumed where hitting cones. Was there strategy involved? Did the rides plan to hit certain cones to have a quicker time? Is it worth it?

The womens quarter finals had Imi going up against Lynn Kramer, the Gold medalist from the Hybrid Slalom event that took place the day before. As always, Imi gave it her all, including a bright and loud ‘Good Luck!’ on the start line, however Lynn was too quick. Imi ended having a cleaner run in regards to cones with only 2 cones hit compared to Lynn’s 4, but Imi fell short by just over 2.5 seconds. The defeat did not hinder Imi’s spirit, as she returned to the team Aus tent with a smile and expression of appreciation for Lynn and stating that that is where Imi wants to be in the future, putting fast times down and crossing the line first.

Lynn went on to get 2nd place for the womens, behind Latvia’s own Anna Gailite. The mens quarters were covered by Latvia, USA, Czech Republic and Brazil. It was an all Latvian podium for the mens with Gustavs Gailitis in first place, Janis Kuzmins in second place and Toms Dreiblats in third. Congratulations to Latvia, it was a pleasure dodging cones with you!