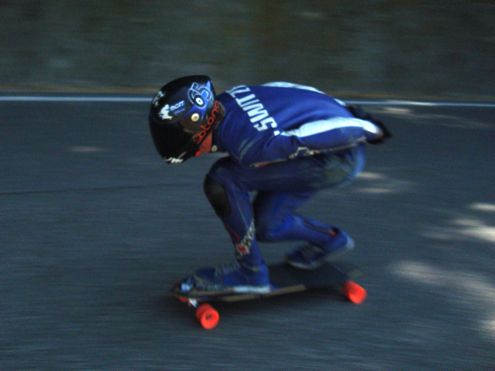 Ramsau, Austria- Canadian Patrick Switzer won yesterdays Fluderer LongboardJäm 09. He was followed by Australian Jackson Shapiera in second and Sebastian Hertler from Germany in third. Hertler had won rounds one and two of the series but faced some stiff competition from the international racers. Switzer and Shapiera are both staying in Europe waiting for next weeks European Championships in the Czech Republic and the next World Cup in Eastbourne, England August 21-23.


Defending World Champion Michael Serek from Austria defeated Italians Roberto Marasca and Frederico Barboni to win the Classic Luge race. The win was Serek's second of the year in the König der Berge Cup Series and his fourth of the year. He won the World cup races in both Peyragudes and Argonay, France and is well on his way to defending his Classic Luge IGSA World Cup Series title.


The race was round #3 of the König der Berge Cup 2009 and was held on the Ramsau Skiroller track in Austria. For additional information go to www.fluderer.com

Premium Member Comment by Dani on August 11, 2009 at 12:48
Any more Aussies competeing? how did they go? Congrats jackbro!