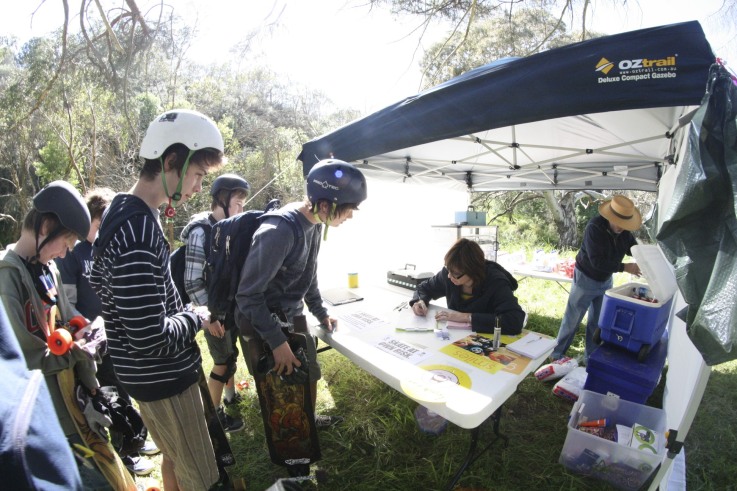 Sunday 25th of September 2011 was the day, and skaters from all over Adelaide got together at Brownhill Creek to skate and raise money for Camp Quality.
It was a huge success, and made more than $750 for a very good cause. This was 3 times the expected donation so a huge thumbs up to everyone who put in. Great stuff guys!!
The generosity for this event was unbelievable. The riders paid their $10 registration fee, and many also donated money, (one skater paying $50 for his registration!)

Our sponsors were also super-generous with Ado from Cre8iveSk8 in Queensland shipping a fat bag of schwag, and Sean from Adelaides fave skateshop, Daily Grind, offering some equally awesome prizes, but more about that later.

The racing was tight, and the groms were killing it!
It goes to show how much energy these guys have for a good push, …..most of us over 20 year olds had no chance against their youthful take-off power. The push off is an important part to winning DH skateboarding, so I want to warn all of you other states,….there’s something in the water here in Adelaide,….these guys are fast,… you better have a good push to beat these groms!! 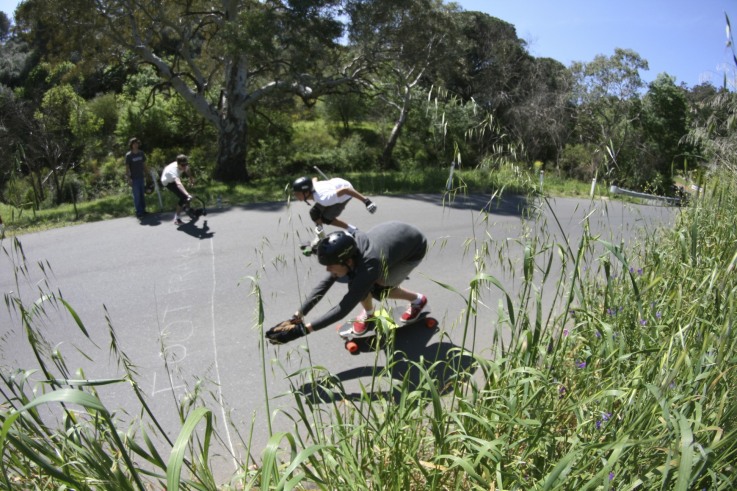 We managed to run more than 40 races to arrive at the top 2 brackets. This was great for the skaters as most of them got 5 competitive runs in before the finals. In between the runs, the Red Bull girls arrived to fuel the riders up for more racing. I’m not sure if it was the girls that got the groms charged, or the energy drinks, but for the next hour the racing was on,…. thick and fast.
We stopped for lunch before the finals where the skaters were able to purchase Vilis Pies and Pasties, and also donate a bit more to the kids. After lunch it was the Main Event.

The Semi Final group of five would allow the 1st place winner to move to the Main Final.
For the Semi's it was Sam Sibly, Mark Hepple, Brodie Owens, Will Morphett (Morph) and Gianni Celani.
A good kick off saw a very close pack most of the way down where Mark Hepple managed to get out in front and make it to the line and into the final race.

The final line-up was - Geoffery Templar (who ranked number 1 in points easily), Jayden Mitchell, Harry Allwood, Jack Bain and "Ghost-Rider" Mark Hepple.
On the start line there was no race faces, all the guys were giving the high fives and wishing each other the best of luck,….totally awesome stoke from all of them!
The start was clean and the riders kicked off with full force,..it was amazing to see Geoffery Templar pull away so quickly,…. Mark Hepple gave chase, but couldn’t catch him, Harry Allwood took 3rd with Jayden Mitchell and Jack Bain close behind. 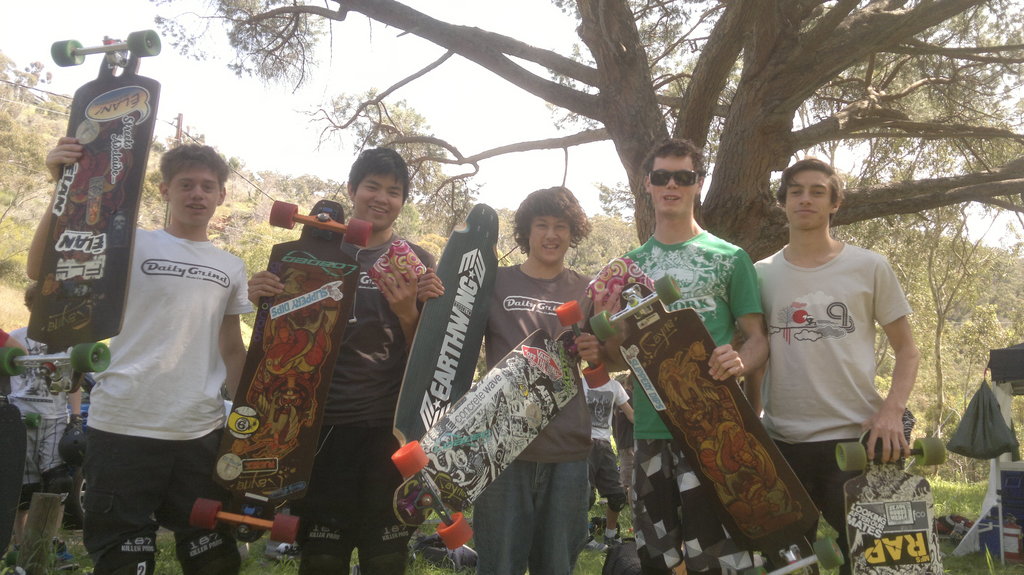 After the finals we started to judge the riders for style with a freeride comp. The judges made up funny names for the riders like “teen-mo” and “hot-ass“,… (the judges were girls,…so that’s not as dodgy as it sounds). Showing full flare with cross stepping connected to standies, going into and out of fakie with no loss of form was Nick Frayne. He blew the judges away with his style, and took the prize for best free-rider.

With most of us pretty exhausted we ran one final cross country China Bomb, from all the way up the top of the hill. We started the racers Le Mans style, which means the racers had to run across the track to pick up their boards and ride (friggin hilarious). It was 2kms of ups and downs, pushing and tucking.  Once again the groms proved too strong for the most of the older riders, just leaving us for dead. In the end Harry Alwood crossed the line first, just in front of Morph.

It was a great day of skating, and the prizes were off the hook! The main winners took home some great gear, but groms-in-need scored big too.

Ado from Cre8ive Sk8 was kind enough to donate a set of Calibres, a set of Randals, some Classic Big Zigs, Seismic Tekton bearings, Biltin Bearings, Nipples bushings, a stack of skate tools and some very cool Cre8ive Sk8 t-shirts.

Sean from Daily Grind dropped two killer decks into the mix. A carbon mix Earthwing speed board, and a Jet Revolver 38. He also added a set of Landy Hawgs Mini Monsters, a fave wheel of many riders.

Xtreme Boardriders came to the party with some $25 vouchers which also went to the most cash strapped riders.

I have to thank everyone who came out to this event. We will continue to try and promote more events in Radelaide in the next year in the hope of putting together an association that backs Longboarders here in SA, as well as helping our states up-and-coming riders to safely hone their skills. We are even thinking of a Radelaide Cup.
All in all a great day out in the sun. Great vibes from all of the riders, and pure stoke at the end.

This is how I’d like to spend every weekend!

Shout-outs:
Shout out to the lads who came down from Claire,…they were great guys, and their girlfriends were awesome help on the day!
Morph was also a legend! He helped round up the skaters for races as well as helping me with the start line so I could have a roll.
My wife Nia and my Dad Rob, who took registration and fed us. Thank you very much.
Vilis Pies for the Pie warmer and a deal on the food.
Zonge engineering,  supplied us free of charge with a generator and huge esky for the cold drinks. Not to mention a first aid pack and fire extinguisher for just-in-case.
HUGE SHOUT OUT to Ado from Cre8ive Sk8 for the awesome prizes! Get behind sponsors like Ado, as he is really putting positive energy into the Australian scene. I have known him for a few years now, and love chatting to him. Ring him and buy stuff. He is your friend. He is a huge star on the Australian scene! Loves our sport, and loves gear! Great combination.
HUGE SHOUT OUT to Sean from Daily Grind, who didn’t really know me from a bar of soap a week or so before the event, but still trusted me and my crazy idea to run a “demo event“. He was super generous too, and is unintentionally running the coolest youth drop-in centre in Adelaide (his shop). Parents should be paying Sean to babysit their dirty groms. They are always there! Drop in and see him, and buy something!
Thanks Sean! 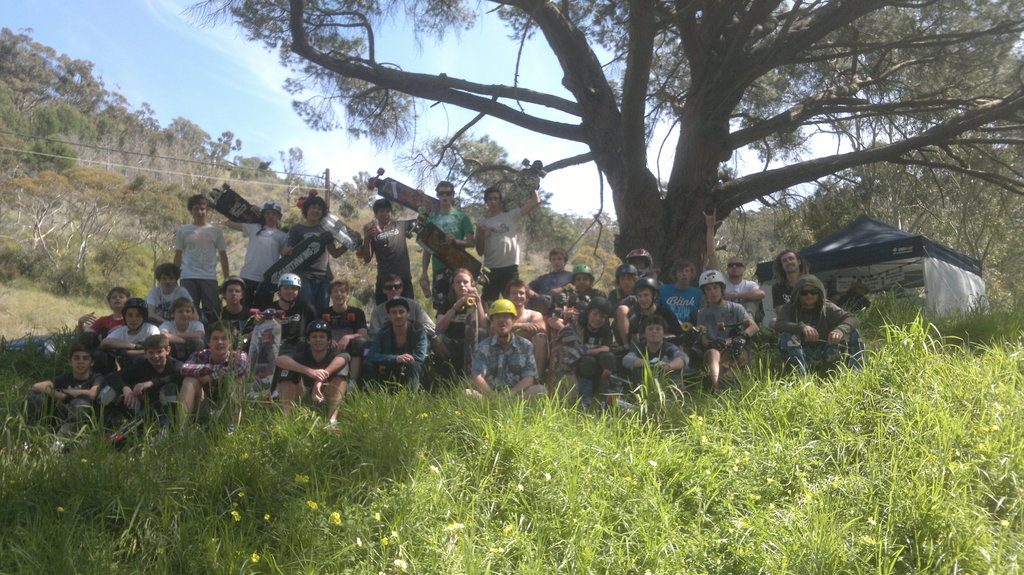 I even scored a No Fear helmet and Loaded race gloves with Slippery Dips. Awesome!!

Geoffrey, better meet up so you can get your gear. Im going to be hard to catch for the next month.

When will the points be up?

I'll try and get them in by EOB tmz. That doesnt mean they will instantly appear tho. You have to give us some time.

Awesome Matty, wish I was there! Now come back to Brisbane and do an event like that here!
Also Ado is awesome and everyone should have a look at his new online site!

Youd have loved it Tim. Adelaide skaters are a top bunch.

Yeah, and Im happy to see Ado has the online shop now too. It makes it easy. Cre8ive Sk8 rocks and so does A-Drain. He's the candyman!

You can not imagine the images that just came into my head when you said he was the candyman...

hahahahaaaaa, he'll get you hooked on his candy.  Beware. :D

haha, I will have the pleasure of meeting the candy man at BTB next  year, gonna be awesome!