HOLE IN ONE at Par 5 Links! 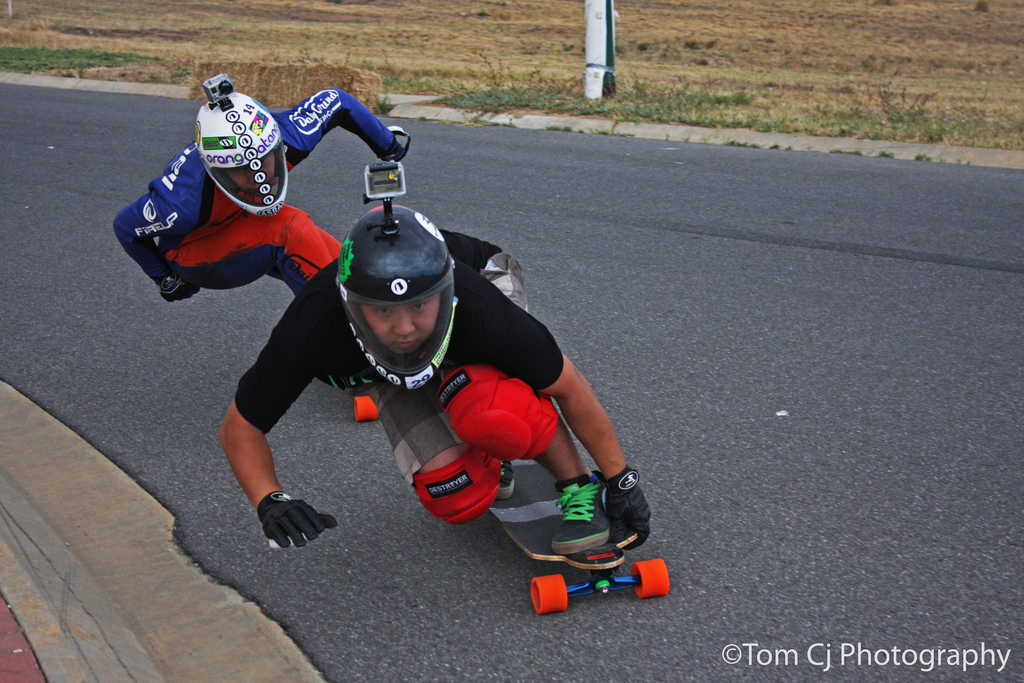 Over in SA, let me tell you about this spot, that is on this hill, overlooking a beautiful golf course and the crystal blue sea, and where the roads are perfect hot-mix. It’s a great spot and it feels like skate paradise. It’s a short run, ….but it’s fast. PLUS, just to make it even better for spectators, from the top of the hill you can pretty much see the entire run because there are no houses.

So we had a little grass roots charity race at this spot about an hour and a half out of town. It couldn’t have turned out to be a better day. There had been some worry about rain, but the weather held out, and we had a dry track for the whole session....and what a track it was!

We signed everyone in on time and got into the round robin. It was great fun, and most people got in 4 or more competitive runs, (except for those that were late). I was also happy that many of the skaters were serious enough to wear their leathers. It must have been unpleasant in the heat walking up the hill, but those first runs saw spills in about 50% of the races. It was of course, hilarious to watch teenagers in leathers walk up hills in 30+ degree heat, but you know,… they were all so happy to be racing, it didn’t stop any of them.

Check out Vikrams pics below-

Arriving late but still early enough to get a run in the round robin, were the local guns, Leigh and Bow (they actually lost that first race so their scores weren’t that good for the seeding). Performing well in the round robin was Jayden Mitchell, Will Morphett (Morph), Aaron London, Mark Hepple (Ghost Rider), Matej Bacic, Tom Mansfield, Addison Lucchesi and Brodie Owens.
When we started to race the tree format (this was pretty much a series of finals that everyone was in), we decided to haul the riders to the top in a ute rather than making them walk,… but this didn’t slow down the format much. We maintained a closed track without having to stop traffic, and we didn’t see very much local traffic for the entire time we raced. (or the cops…..yay!)

Have a look at Carlos Zuluagas pics below-

First and second round knock-outs saw racing at its finest. There were some incredibly tight finishes. The two corners on the track were tricky enough to make it very difficult to catch those riders who had chosen their lines well.

Making it through to the Semi Final was Jayden Mitchell, Matej Bacic, Mark Hepple, Addison Lucchesi, Micheal Bowditch, Will Morphett, Brodie Owens and Leigh Griffiths. These two races were very hotly contested, and all of the riders at the top of the hill were able to watch. It was amazing.

Making it to the final were 4 very talented riders- Jayden, Bow, Mark and Morph.  Jayden was on fire for the whole morning, but hadn’t raced Bow yet, so how would he go against one of SAs finest riders? Everybody lined up at the top of the hill so they could see it unfold.

The Final:
Kicking off hard, it was Bow that grabbed the lead early on, with Jayden taking his draft and Morph and Mark looking for a way around. In the first corner Morph found his line on the inside of Mark to be very tight, and just at that moment lost his puck. The sudden friction caused him to come off his board. Mark Hepple stayed on, but Bow and Jayden had held very nice lines, and were getting away. Jayden stayed glued to Bowditch, and in the last corner, with only meters to go he made his move. He took the inside, rode out a wobble and passed Bow in a miraculous nail biting finish! Video shows the last few seconds as an absolute classic!

So our winners were

We ran a couple more races after the final, but the riders were stoked on the session anyway. Daryl from FLY held a special race for a pair of shoes. A SIZE 9 China Bomb. It was funny, and I was amazed how many of the skaters were size 9.

We also had some incredible prizes.  Check out this slideshow.

Ado from Cre8ive Sk8 send us some primo schwag, as did Sean from Daily Grind. We also had some great prizes from Arctic Boyz, Kebbek c/o Steve Daddow, Slippery Dips, FLY and some awesome souvenir toe stops from Wrightys Speed Equipment. Everybody got something and the prizes were decided by draw from a set of cards. (yep we has more than 52 separate prizes ranging from trucks to t-shirts). Once we did a round, the undrawn prizes became a product toss. (The groms went mad,….. it was great.)

We also managed to do well with the money. We had decided to keep the entry cheap, but give the riders the option of also putting in for charity. Nearly all of the riders paid the full $30, which meant we collected a good prize pool, as well as money for charity.

We cleaned up the spot (thanks again to Beet who stayed and removed the hay bales etc), and moved into Yankalilla for an expression session. It was great to see that we still had most of the riders with us,… a few had gone, but now some of the younger groms had swelled the ranks. In Yank the riders were able to get a bite to eat, so the energy picked up again. It was a great session, it went for about an hour and a half, on another fairly empty block.  There was a set of 81a Classic Freerides up for grabs, but the skaters were really just having a blast, and it didn’t matter. The younger riders were amazing us, a couple of them pulling out some unbelievable and unique form! They showed guts and a great amount of promise!

In the end the freeride was won by Tom Dettloff, who narrowly edged out Jaydos and Charlie Harris.

Beet (Russell) had gone beyond the call of duty and sourced some footy goal post padding that he put around the street light poles, and he also put hay bales in the drains. This, in fact saved the day as there was a couple of times where riders were thrown off their boards and slid directly into these bales. It could have been ugly without them.  Thanks Russell, a great step up for an outlaw event. He also ran the start line and kept those skaters lined up in dummy grids. A good guy to have!

Phil, AKA Mr Bastard, came along as a favour to me and acted as finish line judge,… a role that can be difficult, believe me.  His keen eyesight, and clear radio voice made easy work of start finish line communication. Thanks Phil, I know you love this stuff, even if you pretend you don’t. Thanks for negotiating a day off work to help us.

Skatedad Rob was also on hand. He was a great help, as well as those that monitored the corners and watched for traffic like Phil Thorn and his crew. Thank you all!

The photographers have also done a fantastic job! Thanks you guys! Carlos Zuluaga, Tom C-Jones and Vikram have put together some great albums that show the vibrance, courage, intensity and skill that embodies our sport.  Thank you all.

One main prize for the event was a gorgeous Kebbek Jim Z deck, supplied to us by none other than Steve Daddow! As a first for any event, it was decided by the officials, the riders, and Steve himself, that this prize should go to a volunteer, who on the day ran the races perfectly, not to mention signing people up, taking money, and selling drinks at the same time! Thank you from everyone, the racers and the other volunteers for your help Kolynda! You totally earned this awesome prize! You played a large hand in making the day a great success, and we thank you. 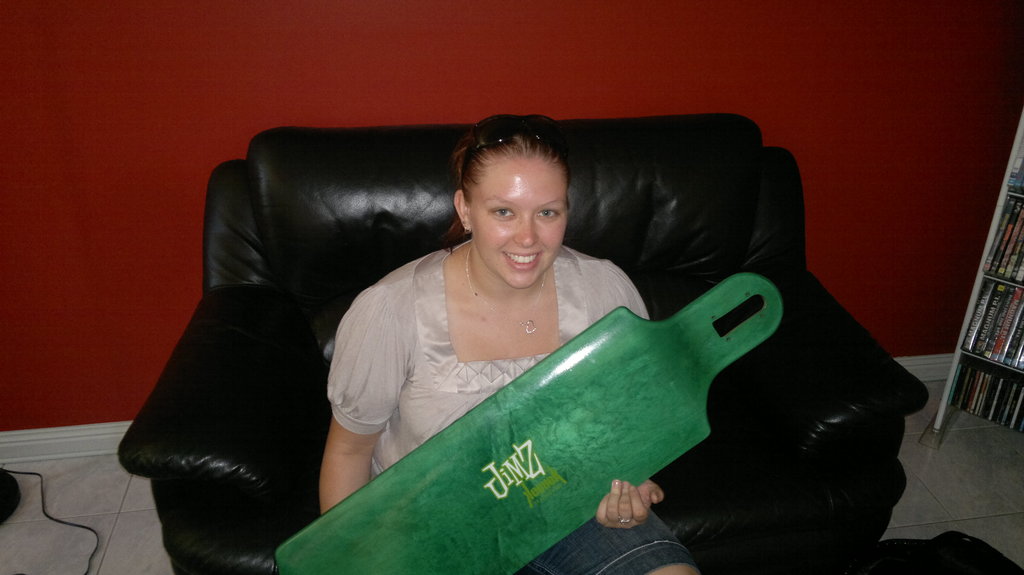 It had been a great day, most of us were sun-burnt but happy. We raised $500 for Camp Quality and that is really fantastic. To me, the money for charity and the stoke from the racers (even before the prizes) was enough. They came to ride, and they all had great attitudes. Well done you guys!

These sponsors got behind us! Make sure you think about them next time you need something!

Ado at Cre8ive Sk8 has a great range of some of the best racing gear in Oz. He also gets that stuff to you quicker! Talk to him if you need those precisions, tell him Matty sent ya!!

Sean at Daily Grind has some great gear too, and it’s great to see the top downhill gear is filling up a bigger and bigger section of the shop. Go to Daily Grind and thank Sean for his support of this race!

Steve Daddow! Check out his website! www.daddowskateboards.com  I know a lot of people want his boards, but aren’t really sure where to look. Go directly to the man! You can even give him custom graphics. (personally,  I like the ones he’s got!)

Sidecar Nic is the man to talk to about Arctic Boyz gear. The solid gloves those guys are making were some of the toughest looking race gloves I’ve ever seen.  They also make awesome leathers that breathe. Not a bad idea for Australian conditions.

Wrightys Speed Equipment is the work of Tim Wright, who is a skater and photographer, with a real love for this sport. Everybody these days is using a toe stop. His are the best! Ask him to do a run of them for your crew!

Slippery Dips slide pucks! Born on one of Australia’s most famous hills- Old Willy! We all know and love these slide pucks! You can’t seriously be thinking about using any other puck? Get the real deal! Locally made and proven to be a real favourite.

FLY Boardriders. It was great to have Daryl come and join us! First time I’ve seen a skate shop owner actually come and race too! He brought a bag of great prizes as well, so how cool is this guy?? He is the local man to see down south of Adelaide! He loves the scene, and is a part of it. He’s at Seaford.

Thank you everybody! I am still buzzing! It was a really great day! Totally awesome spot! Thanks for bringing the stoke!

Thanks Ben! I think we can aim for bigger and better now!

THanks again matty you know how to hold the event. Good writeup too.

Sounds like it was an awesome event! Well done Matty

Thanks guys. We'll stay on the lookout for more spots like this, and hopefully have another session here later 2012.

Helmets off to Matty. He's done a great job not only in organising the event but keeping it cool. It was great to see so many serious bomb groms setting some great pace and the final race could not have been any better: for the specs or the racers...one wheel decider. Awesome.

I was really stoked with the great attitude of all the racers and had a great time at the freeride. I hate it though when they make the front and backside stand-ups look so damn easy and steezy. Well done guys. Looking forward to more freeriding. We may even need to set a "Masters" division next race ;-)

Placings calculated from the tree, and where placings were the same, averages from the round robin have helped lay out the ladder. As you can see, some placings were even.