Josh E, Zane and I (Matthys) arrived at the hill the day before the race at sunset. We drove up and instantly looked in the back of the van to see if we had remembered the broom. The hill was pretty much covered in gravel. The construction sites on the hill had left marble sized rocks over all the corners. After about 3 hours of sweeping in the dark, we concluded that the hill was rideable... Probably...

It was a whole lot gnarlier than I had expected, consisting of a relatively steep straightish sweeper shooting you into a big double right hand hairpin at about 70-75 if you were pushing it. This then flowed onto a flat, leading into a dipping left 90 and down into a quick right left before a small straight section, right into a t intersection with the main road. It was a pretty gnarly shutdown zone, and as we were to find out the next day, would cause some hell mondo carnage. (Hold out for Daddow’s gopro footage of the shutdown zone) The day kicked off with some more sweeping from yours truly, followed by good breakfast of BP sausage rolls and coffee. The crew started rocking up at 8:30, and by about 10, there were about 50 people at the top, getting stoked in anticipation. It was sick to see some international riders at the hill, including the Europeans Ville, TB, Kula Jensen, and K-money from Canada.

Mike English and the crew from Extreme Skates showed up shortly after, and things got kicked off straight away. All the riders got registered, and Mike was kind enough to forego my rego fee for doing all the sweeping. The first few practice runs were GNARLY...  A few guys nearly got taken out as groms chucked pendies and sketchy footbreaks. However, once the marshals were set up and the finish line was sorted, the quails followed promptly. The tree, which Mike had to explain a few times, allowed everyone to have at least 4 runs in before finals started, so everyone was stoked to start racing.

Most of the OG’s opted out of racing, having some foresight into the super tight gnar which would follow. Quallis weren’t on long before Jack Allen had an off, and was driven off to the hospital to check out his hand. For a little while everything ran smoothly. However, after about another 3 or 4 heats, just when the top dogs were starting to show their business, there was news of a gnarly crash on the dipping left. Fraser Spratt, a young shredder from Brisbane had come off, and had unluckily collided with a drain and some wooden poles. I was one of the unlucky ones to witness his macked ankle. Have a look on his facebook page for some pretty stomach curling pics.  Daddow, yatesy and some of the older guys sorted him out, and the ambos came down after a little while. He was on the sacred green whistle in no time, mumbling incoherent phrases. 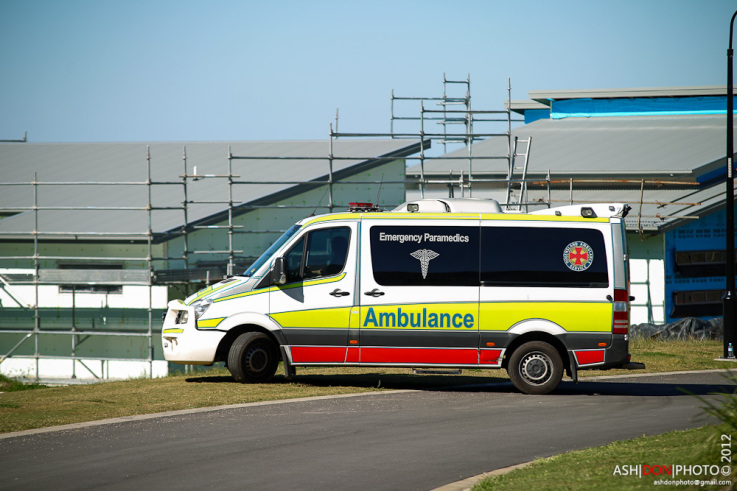 After he was taken to the hospital, Mike called everyone up, and Yates delivered a moving speech, casting silence over the crowd. Everyone was rather indecisive as to the course of action; whether to continue racing or not.  However, after Mike told everyone to take it chill, and made the decision to move the starting line lower down, to try and make the track a bit less gnarly, there was a unanimous decision to keep at it.

The semis were tight as a bees arse, with everyone fighting for a spot in the finals. Kula Jensen bossed all day with his monster push, killing everyone in all of his heats. Standouts in the qualifying were Ville H, Mathias L, Dean B and Roy C. 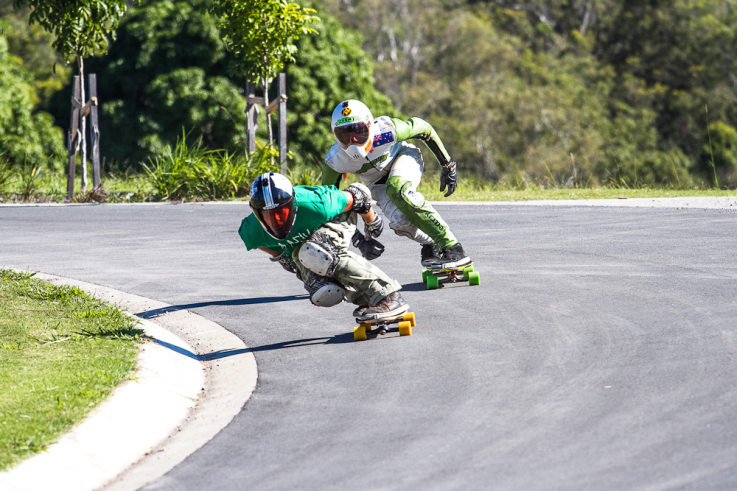 However, as it usually does, it all came down to the finals, with Kula, Josh Evans, Dos (Jayden Bielby) and me (Matthys van Lille) on the starting line. Even though we had all agreed to take it chill, I don’t think anyone on that starting line had an inkling of chill on their minds. My nerves were definitely pumping all the way up until “GO!” was sounded.

As Jensen had been doing the whole day, he powered off with a huge push, with me close behind him. I swear on my life I still don’t know how we managed to get on our boards, our wheels were that close to locking up. In my peripherals I could make out Josh and Jaydos on my left.  I came up hard on Kula into the right, taking the inside, and lost sight of him out of it.

Me about to take the inside on Jensen 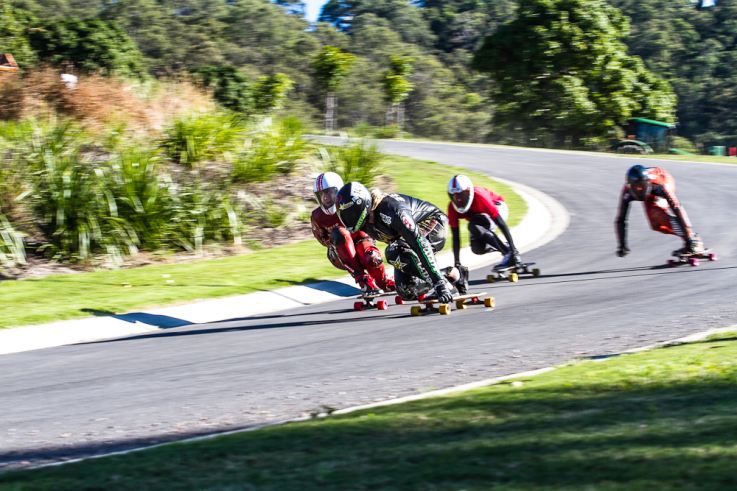 SUPER tight through the right hander

I tucked up and pulled myself as tight as I could on the small flat before the left, and just before I could swing left to take the inside, there was Kula. Josh gave him a teensy nudge so he wouldn’t hit him, and Kula took the inside on the left, with me and josh meeting and holding out of it. 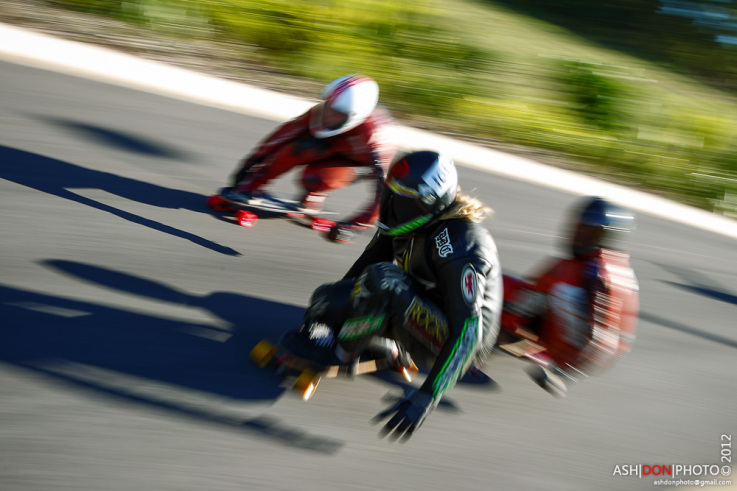 Kula taking my inside with josh on his arse

Kula was about a meter ahead, and it was tuck battle, with me pipping Josh by half a meter at the finish. There were countless puck claps, fist bumps and man-hugs all round, with everyone’s stoke flowing harder than the Yangtze River. Kula, Josh and I received really worn-out-wheel trophies, signed by Mr English himself, as well as a few other goodies from Extremes, and Tim Wright's foot-stops. 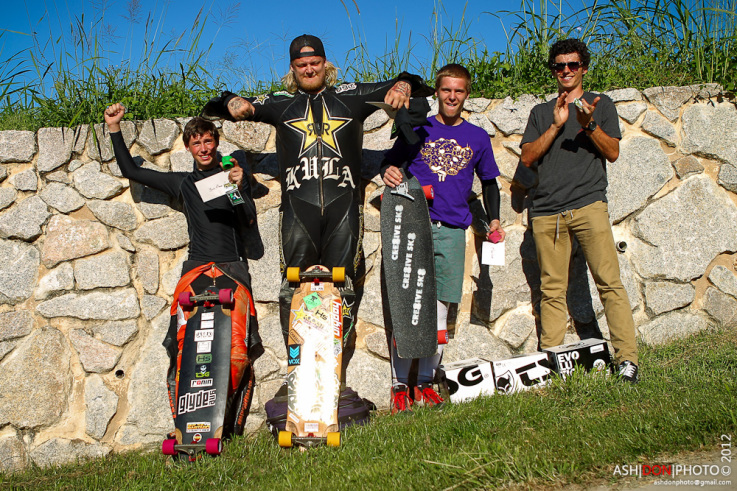 Stoked out podium! (me on the right in the Cre8ive Sk8 shirt)

After that there was a bit of freeriding, but most people were macked from the heat, and were hungry as hell. All in all, save for the hospo runs, it was a wicked day of skating on a sick road with steezy people. Make sure you get yourself to the second race in the QLD series!

Big thanks to Mike English for holding the event, and to Franka from Extreme Skates for driving us up the hill.

Thanks to all the sponsors, including Extreme Skates, TSG, Supersports, Wrighty's speed equipment, and Kebbek, rad events like this cant go down without you...

Also a big ups to Joe Campbell from NGS for taking many a gnarly stack, (including a mega drop into a 2m concrete ditch) and still picking himself back up and rocking on. 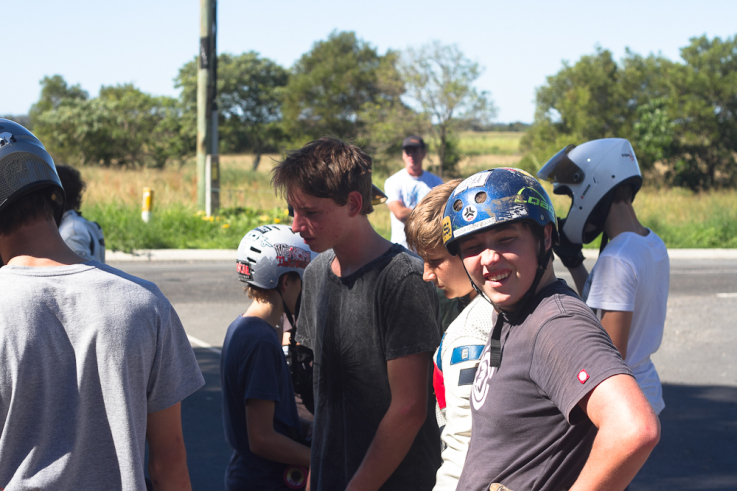 Joe Campbell after an off

Big thanks personally to Cre8ive Sk8 and Glyde Skateboards for hooking me up with the gear to race with.

Yeewwww! Was a rad event!

sounds like a day full of gnarr, well written!!!

i wanted to go but couldnt find where it was, can some one pleeeeeeeeeease tell me where it is?