The Saturday started off as usual at the best little slalom racing weekend in existence, with a glorious day at Stromlo Forest Park, our awesome venue. We race on the Stephen Hodge Criterium Circuit which is normally reserved for bicycle racing. The course was a fairly loose 50 cones, with offset and a ‘gimme’ section that was really tricky. The usual suspects showed up from all over with NACCOSS and MOSS represented and several new players from Sydney, Melbourne, WA and Canberra. ASRA Prez Haggy was in attendance and set a blistering pace on his first run. Jonny McGrath returned with his usual speed, style and all day long commitment to flying down the course. Ryan ‘Pickles’ Nicholls was in the mix and Neil Willington was showing his usual ‘looks slow but is fast’ style. Dangerous Dave Miller got the highest place for a CROSSer and the top 3 was Jonny McGrath in 3rd, Simon Duber in 2nd and Haggy Strom taking out 1st by 0.110. It was very close racing right until the end, and Dave Miller was bumped out of the podium by a cone penalty.

The field was split down the middle by Martin Pavey in 13th place, at 57 years old returning to slalom in recent times, Martin is an ex UK champion slalom skater from the heyday of slalom in the 1970’s. He has a unique style facing his feet almost straight forward on opposite sides of the board, and it served him well in the main event and the 100 cone later on. It was great to see the locals from Canberra Dirty DownHill back again for more, the places between them were hotly contested with Owen Davey finishing ahead of Lachie Cashman, Alex Marriot and Tim Hannon. Our other first timers were Merv Rowley from Melbourne and Anthony Boi from Sydney. We also had Leah Harrison, our only female entrant, doing her first slalom race ever and getting the course done which itself is an achievement, plus a second last placing to boot. 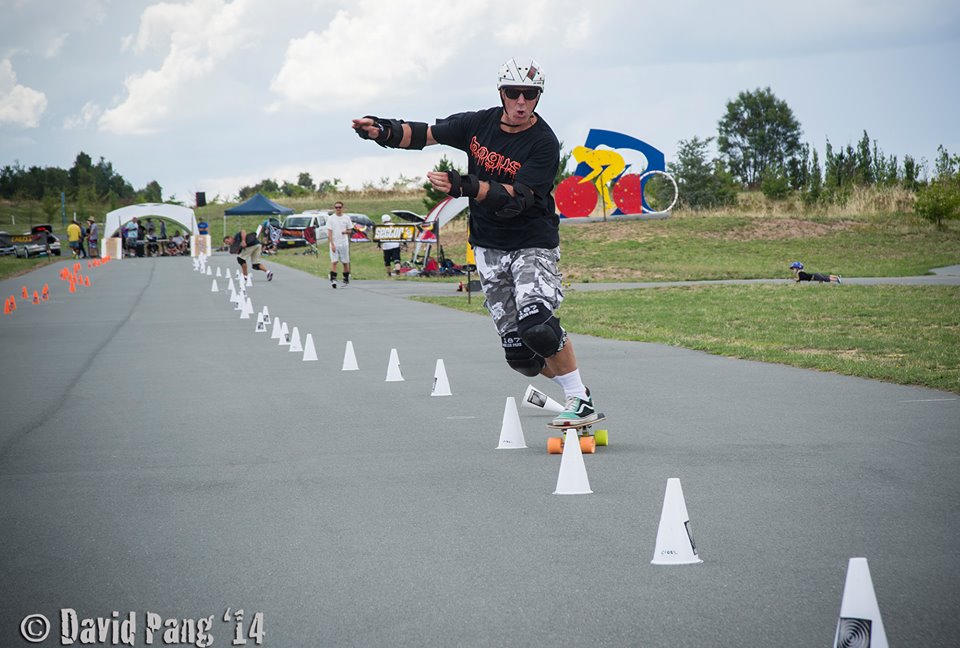 Martin Pavey gets into the swing of things. Photo: Dave Pang.

Our new timing system was the bomb, a huge thanks to Neil Willington for sorting that out and we are so stoked with the outcome. The new Trakmate has random start timing, meaning you get three beeps, then a random delay to the fourth. It seemed to bias toward long starts, and caught several people out with false starts. It threw a new dimension into the racing, and it is a pretty standard thing in head to head racing such as BMX and 4X bike races. It provides a fair start and a true reaction time unless you try your luck and get lucky. This thread at ISSA has some discussion on it, I think it’s a good thing and our race will be running that way from now on.

Then there was the 100 cone race. First up, this is a big job to set up and we managed to get it done quickly using a straight line rope and a rope for spacing. 100 cones is very difficult, I couldn’t even make the course but several did and had some hot times. I don’t have the results on me as we did them on paper and the paper and I’m trying to track it down, but from memory and from the constant bragging about being an Australian Record Holder, we know that Dave Miller won. Close second was Daniel Monoghan, and Jonny McGrath in third. I think they were all in the 27 seconds bracket. It’s always a stretch running the 100 cone race but we got the main event over and done with early and everyone was stoked to try the hundred. Martin Pavey put down a time in the 27 bracket too, that had he not hit a cone would be an unofficial world record for over 55! Next year we’ll run it on the spreadsheet. 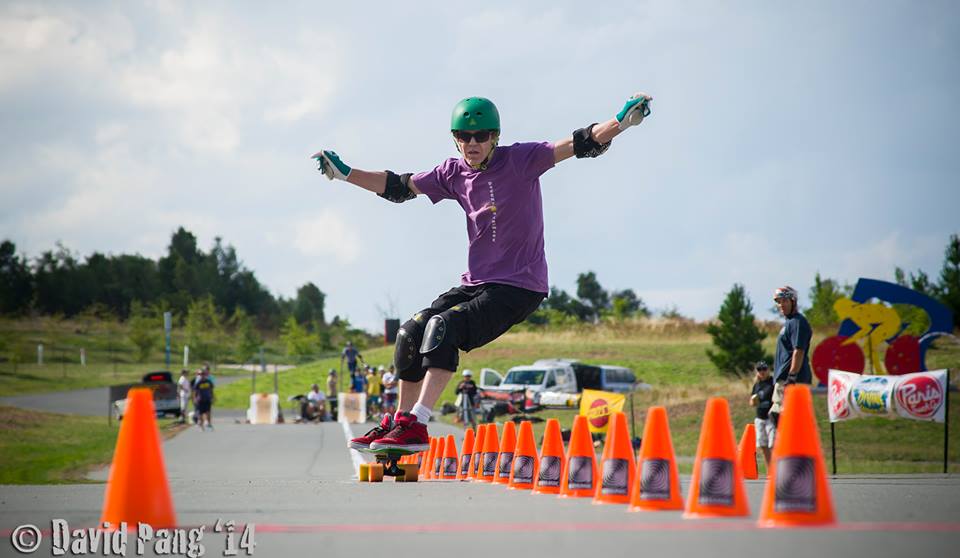 The monster raffle was huge as usual and a good night was had by all at the Skatesman. It also kept with tradition of people winning multiple prizes, swapping them and giving them away. I could have stood around talking slalom and drinking beer until the wee hours but it was a big day coming up. 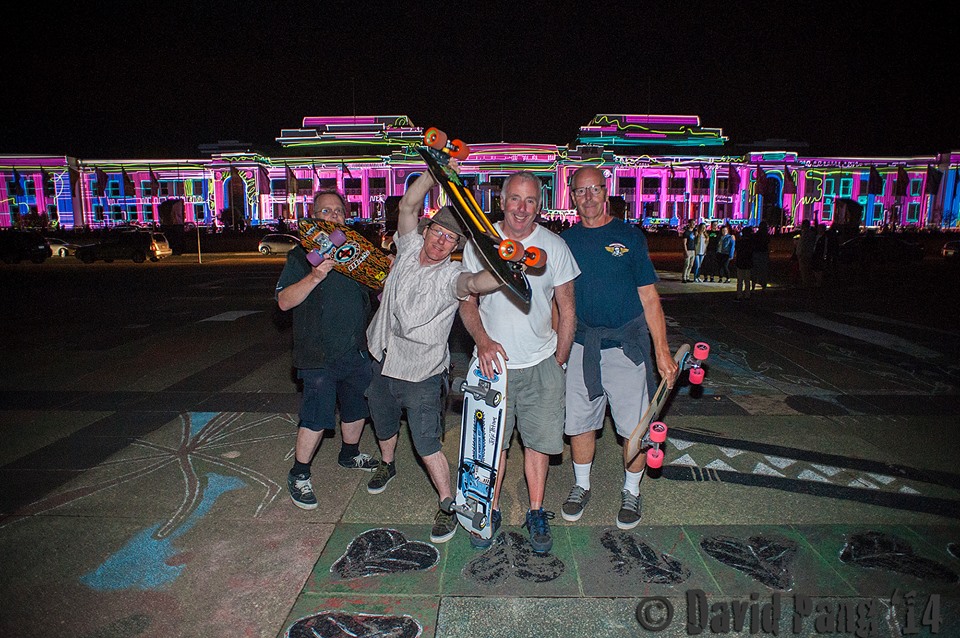 I’ll start by saying that this is a truly unique ditch race, worldwide. I’m pretty sure this one of a kind ditch was built before I was born, which would make it over 40 years old. The ‘teeth of doom’ is a fun thing to say but they rarely come into it because if you cop a tooth you’re way out of shape. We arrived at the ditch to find it soaking wet, but slalom riders are optimists and thought it would come good, Rossco did laps with his blower drying out the last trickle of water running down the middle while others worked the brooms to sweep up the moisture. By 12:30 some of the guys started doing runs, and the sun came out, game on!

The first group did their runs, and there was early DQ’s and get off’s all over the place. The course was clean and riders had no trouble maxing out their speed, at the end of the day only a handful that had 6 clean runs. Early on Owen was looking good for the Canberra posse but Dan Bailey quickly got his measure. It was an ongoing battle but Owen laid down a good time, and ended up in 4th smashing Dan’s dream of taking him out. The second group fronted up and NACCOS put its stamp on the event. Simon Duber (The Dubernator) put down a fast time early and had the entire pack chasing for the rest of the day, with no luck. 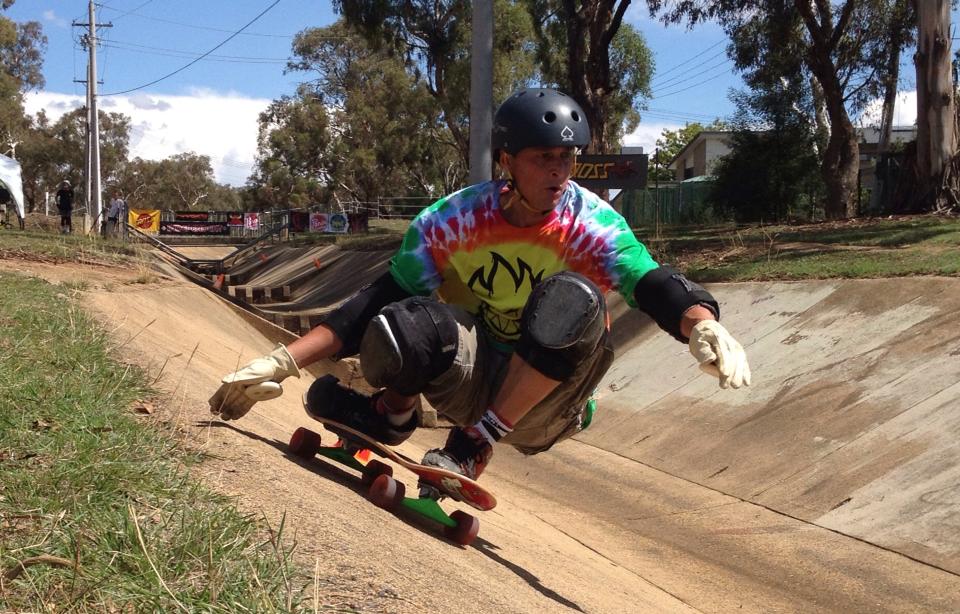 Style master Dave Pang on the other side of the lens. Photo: Sean 'Gravel Burns'.

The course was proving tough for a lot of people and we had a few first timers who’d never ridden the ditch before. It was great to see that only one didn’t post a time, but he wasn’t going to give up on that. Despite a setup that was not working well, Anthony Boi persisted and in the end he got a clean run way after the racing was over. There were plenty of stacks with Chris Miris taking out a spectator who was too close to a cone and Dave Miller taking out chief cone marshal Evan Miris, and newcomer Adam Vink taking two dives but ending up 22nd of 25. By far the best slams of the day went to Sean ‘Gravel Burns’ who slammed hard twice but took 8th place for his trouble. Adam Vink was a newcomer who also took a couple of good slams but got there in the end. Once again Martin Pavey who hasn’t raced a proper slalom race for over 30 years and had not done a ditch race like this before posted three clean runs of six and took 23rd.

We finished off with a small crew hitting up Spence Drains and a quick run at Belco on the snake bowls before I dropped Martin  to the airport for the long trip back to Margaret River WA. Thanks everyone for making it a great weekend and see you next year, or later in the year for the CDDH Giant and Ditch Slalom. Please post your pics and videos from the weekend in the comments.

Neil with the GoPro: http://youtu.be/7TGZNeuGfAc

What can we do to stop this plague?  NACCOS seems to be infecting every podium in every big event. They turn up in huge numbers and swamp the field. It gets worse as they seem to be breeding and invading the podiums of the groms only races. It is an outrage. It is not just a local issue as this seems to be happening all over the country. Looks like a NACCOS cull is not working either as there have been reports of several big fish put out of action and more just keep popping up. Any ideas on how to stop this environmental catastrophe?

thanks guys for a great weekend.

Great Write Up! And Epic Photos! Spewing I missed it this year!