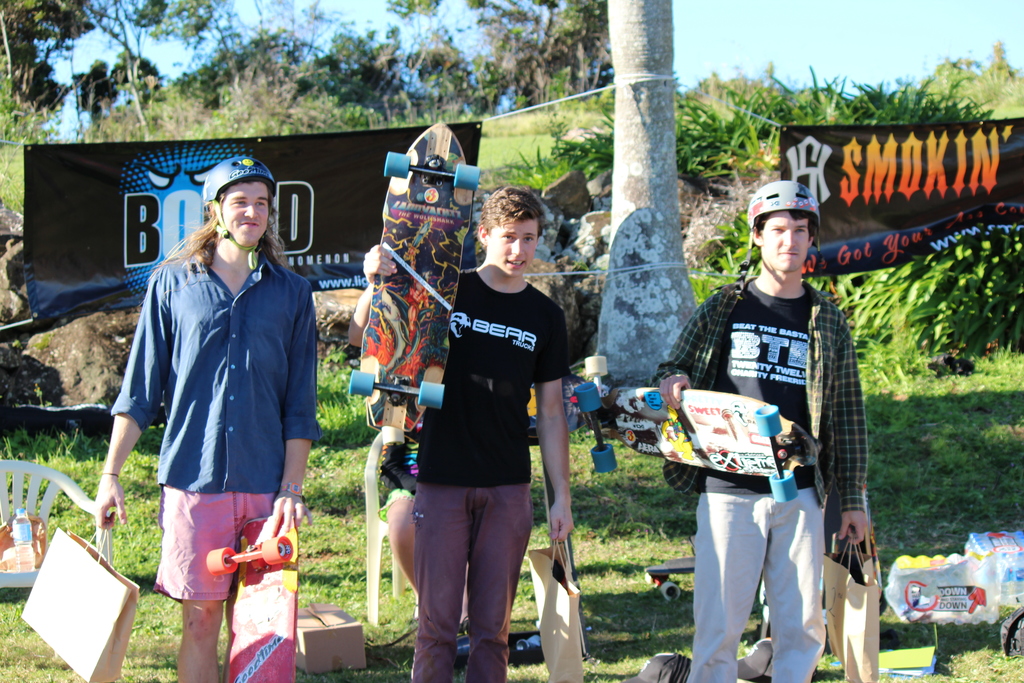 After a month of planning, organising and getting stoked.  The morning of my very first organisation of an outlaw finally arrived. My body running full of nerves.

The morning was perfect, a hill packed with 40 racers and perfect sunny weather. After rider check-in, it was time for the serious business! Race time!

The round robin races were full of very close runs, and a couple of spills. Three major stand outs, dominating all of their heats were Josh Evans, Will Gibson and all the way from

WA Tim Green!! Nothing separated the slowest to the fastest riders.

All the points after the round robin races were added up and everyone was seeded into a 16man Quarter final bracket. Groms and Opens. Maga and Ned opted to sit out and have one last Finale for the ladies division.

The driveway that the race starts on, caused a few upsets in the Quarter finals. Claiming Jeremy off of the kick, leaving Tim Green too far behind in his heat to catch up.

The girls finally stood up to the line again, Maga kicking ahead of Ned. Maga had a healthy lead into the sharp right, before taking a really wide line onto the grass, allowing Ned to pass.

Josh Evans was leading the Junior finals, before scrubbing out on the sharp right hander, Giving Will Gibson the win, followed by Roy Churchland then Josh.

The opens race was so close! Jacob pushing out in front, followed by Elliot and Josh. The sharp righter claimed another victim in the finals, making Jacob srub also, allowing Josh and Elliot by to take first and second place.

After the main racing, there was a china Bomb with no rules. About 15 people raced from the very top of the hill. It was great to watch, will Gibson decided to run over the little crest in the hill, while Jacob Lambert kicked hard and tucked hard, earning himself a free feed at Hogs Breath Cafe.

I'd just like to again, thank all of the sponsors for the race. Hogs Breath Café Byron Bay, Heelside, Original Skateboards, Goodtime, Hopkin, The Wreck surf and street, SMOKIN HOT. Also a big shout out for all the riders, all my helpers (my family, Mick Ikin, John and Kim Giles). You guys made the day UNREAL!

I reposted this on www.skateboardingbyronbay.com

http://www.youtube.com/watch?v=VRJn9_w-Y1Y  Down hill vid of the race

is it going to be on this year and if it is when?