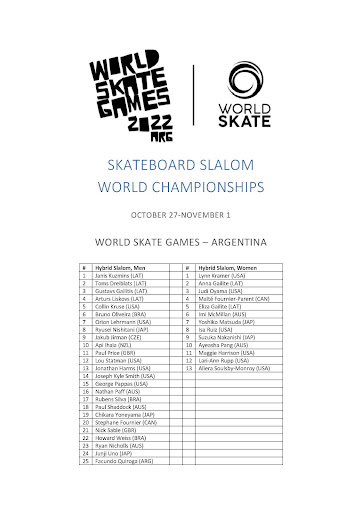 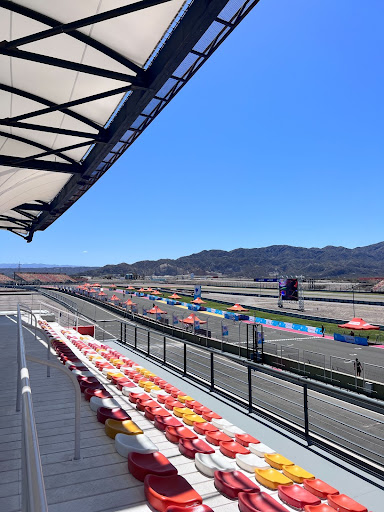 After a half day of training on the 27th, the Australian Slalom Skateboarding team rolled into the Villicum Racetrack ready to take on the day ahead of Hybrid Slalom. Country tents were first come, first served and Australia opted for a tent half way up the left side of the track. Skate Australia Chef de Mission Nicole Mills-Goodwin was quick to cover our tent in Australian flags, big and small to let other countries know we were present.

The Villicum Racetrack where to host the following 3 days of Slalom (GS to be held at Punta Negra) on an inclined section of their straightaway. The Hybrid slalom brought two matching courses of 43 cones, an orange course and a flipped white course. Riders were to have 2 rounds of head to head racing against a selected opponent, each rider trying to get their best time on both coloured courses.

The very first round of the day bought our very own Ryan Nicholls to the start ramp with fellow (and only!) Aotearoa rider, Api Ihaia. Api had spent the days leading up to the event eating food and exploring Zonda with the Aus team, so it was all smiles ahead as they prepared to go head to head. Api surprised the slalom crew with a first run time of 19.741, 0 cones hit with Ryan ‘Pickles’ Nichols not far behind with a time of 20.884, which includes the 0.2 second time penalty due to hitting 2 cones.

The 5th heat brought Paul ‘Shadow’ Shaddock and USA’s Lou Statman together. Times were within the second, with Paul falling just under 0.7 seconds behind Lou. Paul had a clean run with 0 zones hit while Lou hit two, adding a 0.2 second penalty to his time, yet still being just ahead of Shadow. Round 8 had Nathan Paff up against Colin Kruse from the USA, both having a clean run with just above half a second separating their times.


The womens division showed 13 female riders from 5 countries step up to the ramp, with 7 rounds of head to head racing. Ayesha ‘Ishi’ Pang was the first of our girls, going up against Lari-Anne Rupp from USA in the 3rd round. With a 4 cone penalty, Ishi managed to take the win over Lari with a time of 22.804. Round 5 had Imogen ‘Imi’ McMillan up against skate veteran Judi Oyama from the USA. Both women had a penalty of 1 cone each, almost making a clean run. Judi managed to have a 0.352 second lead to get the win over Imi.


After 13 rounds and 25 male racers putting times down for Run 1, it was time to begin Run 2 for the males. Riders would go head to head with the same rider from Run 1, with their results placing the top 8 riders in the Head 2 Head finals and the 9-16 riders in a qual semi bracket. With the track heating up, Run 2’s heats proved to be slightly faster times for most riders but also delivered many more cone penalties. Similar to Run 1, Pickles crossed the line just over a second after Api, with both riders hitting 3 cones each. Round 5 had Shadow hit 3 cones, with Lou hitting one, leaving Shadow’s time roughly 0.7 of a second behind Lou. Round 8 had Nathan Paff up against Colin Kruse again from the USA. Colin with a 2 cone penalty and Paff with a 3 cone penalty ended with Colin in front by 1.28 seconds. Congratulations to all the male riders that our Aussies got to battle against in the Hybrid Slalom.

Similar to the mens, the track was definitely heating up for the womens 2nd Run. The women were eager to go harder and improve their time, ready to battle through opposite sides of the course. Round 3 had Ish get the better time over Lari-Ann again, over 2 seconds faster which included a 3 cone penalty! Imi had another battle versing legendary Judi Oyama, and she fought hard to cross the finish line just 0.099 seconds behind Judi, however a cone penalty brought Imi’s time to 22.197.

While our riders had some tough opponents, we are very proud of the sportspersonship they showed throughout the day, wishing luck to their opponents, congratulating their opponents, helping set the track, cheer on other countries and take tiem to greet each and every single rider, organiser and track worker.