Mt Keira Challenge - A View From The Inside 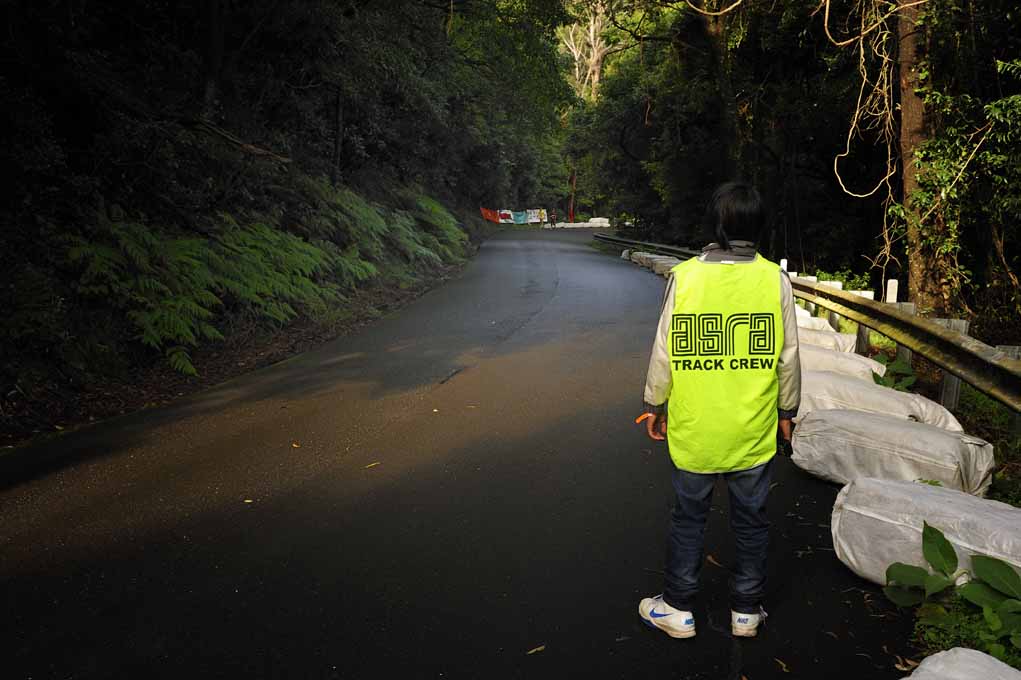 OK done; The fortnight has foregone; rest has sufficiently graced myself and the ability to jar loose the fragments of memory to piece together the best two skate events ever put on a global scale.

With what started two years ago as a dream, became a reality by few with many hats. Leading up to the race weekend we were presented with monsoonal driving rain on just about every task. A brave few stood out in the rain bagging hay bales, 60km west of civilisation for an entire day and night. For others like myself it involved many hours day after day shuttling gear needed and forgotten between the base station (Scout Camp) and Sydney. The most memorable task was finding Robbo on the side of the road the late afternoon before the race drained by leeches laying 2.5km of cable from the bottom of the hill to the top. Coming to his rescue with a fresh pair of gumboots, a carton of beer, cigarettes and two deliriously tired helping hands we proceeded on a six-hour mission well into the pitch black, thick fog covered night laying cable 400 meters in the wrong direction and almost requiring a search party to escape the dense wet forest. Luckily Simon “Leach Magnet” Hendo was one of the helping hands, doing whatever he could to get struck by as many leeches as imaginable; in effect drawing them away from Robbo and myself. - thanks dude.
Riders checked in, settled in the ideal surroundings of the scout camp and prayed for dry weather. Day 1 - The sun came out! Unfortunately being a green road, time was the essential ingredient needed to dry it out. Not helped by the beautiful surroundings, Haggy and I went tag team managing the 3 separate radios required to reach over the whole track. Luckily we were graced with some seriously good self sufficient marshals who dominated over the whole weekend commanding their post. The rest of the day was pretty standard issue, boring time qualifiers, amazing McWhinnie night feast and a small shindig at night in the Main Hall.

Day 2 - Still not raining - Heck yeah! Although most of the track had dried the major last righty was not. Stoke level was high, ASRA crew were running on about three hours of sleep a night and the local crowd was building. As this was an IGSA race we were forced to bore people again during most of the morning with a second qualifier rather than the muched loved Newton's style ‘Race-to-qualify’ (or the even more loved but never IGSA allowed round-robin format). The night time again bought on an awesome meal prepared by the McWhinnies and co, and then rocked the night away to Dave Traina's band Rocwater. Although at one stage I noticed that the majority of people busting on the dance floor tonight happened to be the sleep deprived ASRA crew. This may or may not have contributed to Haggy’s charging pool antics later that night - jumping in Scandinavian style (nude).

Day 3 - Race Day - Guess what, still no rain! but a fair bit of morning dew. We saw this as we were up prior to sunrise on one of Robbo’s dawn missions to Robtec something so it was even better. Yep folks that’s what it takes. Sleep when you're dead, do rad shit while you’re awake. The hill also had a bit of a breeze happening drying up the track  except for a small stream... yep you guessed it, on the last righty - Carnage Corner as Striker put it. This was also the where the crowd was centralised and later grew to epic proportions. But who cared; it was race day and all the hard work and boring qualifying runs had all crystallised into one day of close heats and photo finishes.

I had the pleasant job of starting everyone and see the stoke at the top; Bugs dealt with the spreadsheet bugs and re-formatting formulas due to a dodgy finish line internet connection deleting his finely tuned spreadsheets; Haggy ran around dealing with publicity, city councilmen, haybales, carnage corner crowd control, that sort of thing; Robbo and Leech Magnet Hendo did their best to spot the finishes, directed punters and their kids / pets to keep off the final straight and drew the ever growing population of leeches away from the crowd, straight to Simon's legs; Pete did his best to hastily shuttle the multi-discipline riders that were in finals of two categories or one consi and one final or any combination of the above that caused delay in proceedings at the end of the day; Blackwood at this stage living on zero sleep, and a half bowl of dry cereal and really the engine behind us doing anything and everything at the same time... I even saw him mowing the lawn next to the pool in his sleep deprived state as his subconscious failed to recognize that 4am was rest time.

Finally at the end of the day the rain threatened to come back. The Skateboarding Open Final was waiting at the top ready to roll. We sent them earlier than the traditional last of the day before the track became too wet. To no avail, the small amount of rain that had already fell was enough to make the track greasier than John Travolta’s hair. The final included many crashes and eventually Alex Tongue (.com) took line honors to win the first ever Mt Keira Challenge! Equally as important behind the scenes, ASRA and their band of volunteers had pulled it off! Thanks to everyone that got involved and the ASRA crew, marshals, you guys rock and the event simply wouldn’t happen without you.

To top the night off, one of the best live shows I’ve seen in a good while;
The Walking Who surf rocked our socks off into the night. The next morning again at dawn still half drunk loading hay bales onto trucks for their trip out to Bathurst with our resident super volunteer Bruce De Graaf who eventually got back to Sydney around midnight after driving all the way out to Bathurst, unloading and all the way back - what a legend.

I never fail to be impressed with what the small yet committed team from ASRA are able to accomplish. You all punch well above your weight to deliver what I consider the best World Cup events on the World Tour. So impressed am I that if you guys ever need anything - you need merely ask.... I am available next April by the way.

awesome write up, what an event hey, THANKS to everyone involved, your all champions.

Awesome...cant wait for the sleazy part 2.   It was epic and i loved every part of it.

Massive thank you to all the asra crew and their amazing team of volunteers for yet again bringing us the greatest skateboard races on earth,...well done,.
and thanks to the sponsors.
you should all be proud.

yeah asra crew! you rule!
i think all that have attended IGSA events around the world would agree that ASRAs events are the best on this planet.

big thanks guys and gals.

Premium Member Comment by shane dennehy on May 9, 2012 at 4:53
BIG thanks to u guys at asra all the volunteers and sponsers what an awesome event the dream of an open road at Keira was made possible and the scout camp being right there it just can't get much better.
big smiles from my way =>

Mates, this is our story about Mt Keira for Brazil. Thanks for everyone.. http://globotv.globo.com/sportv/sportvnews/v/skatistas-se-reunem-pa...