After an awesome day at Toohey Tracks the day before, we all dragged ourselves out of bed when it was still dark to head up to the hill.  We fixed up the worst corners guard rail with some nice soft foam and it was pretty much a race ready to go, all we needed was skaters...

We were expecting 32 riders a couple of days beforehand but rumours of it being a bust spooked many and so we were left with a handful of awesome local and Gympie boys, plus Gemma (who was speeding down that gnarly track by the end of the morning!)

Tom Smith had got in contact with some bike riders who told all their bike friends that the road was going to be shut down that morning, so we didn't have to worry about having any messy crashes, there were also very few cars, so the word must have got out to some drivers as well.

As we established radio coverage of the mountain we got the heats drawn and everyone ready.  I was to be racing a GIRL!

Heat 2: Myles made it look easy, got away from the other two guys and won it by a mile, followed by Tom and Hugh.

Heat 3: Without realising it, I ended up racing with Gemma.  It was her first time on the hill! She let me take first... 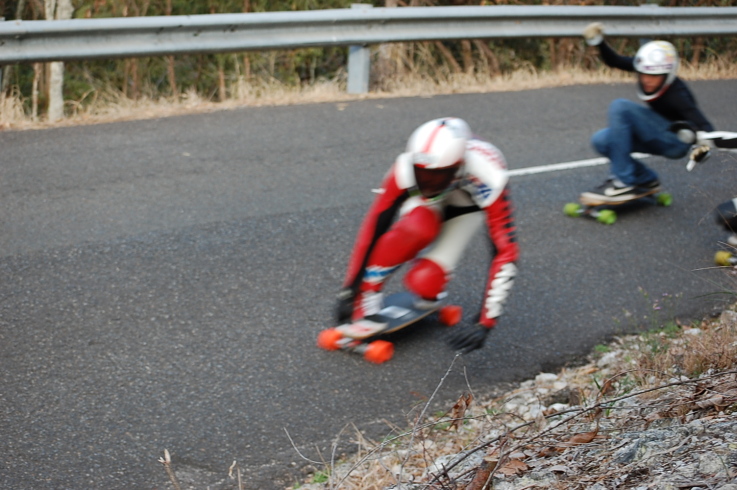 The next draw, I was up against the fastest two guys there, Myles and Jaidyn.  Myles used his massive pushes to get right out it front.  With his awesome tuck and the tight track there was no chance of catching him, leaving Jaidyn and I to battle it out for second place.  Jaidyn was carrying second for the first half of the hill, but I was drafting him into my favorite section, the smooth straight.  I planned to take him on the straight, then nail the tight left hander and carry it till the finish line... that didn't happen.  I underestimated his tuck and only really got beside him, we were going through the hardest corner of the track together.  Unfortunately for me, he had the good smooth line around the tight corner and I had to rail the rough chunky road on the inside, right beside him.  As we exited the corner, he just had too much speed and got away before I could get back in his draft for a second attempt.

In the Final, Myles, using his power-push, once again took the lead from the start with Jaidyn and Mark following close behind.  The took the tight left hander with ease and passed through the finish line in that order.

All three recived a helmet from TSG, get behind them, they love the sport and keep us safe and Prizes from Cre8tive Sk8, the raddest skate shop in Queensland!

Myles - $60, TSG helmet of his choice and I think a set of tekton bearnings

Jaidyn - $50, TSG helmet of his choice and classic thane bigzigs

Mark - $40, TSG helmet of his choice and Caliber trucks 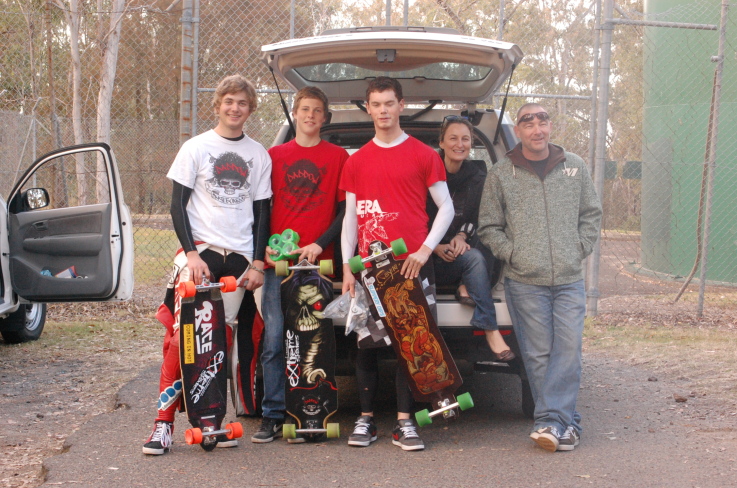 Thanks everyone who came (Mike for photos and bringing TSG, Phil for the finish line, Tom's Mum for the start line and Mack for manning the tight lefty when you were injured!) and a special thanks to the sponsors and Bugs!

By the way, Gemma, for being awesome and taking that hill at that speed, you have some free car tyre coming your way, if you keep footbraking at that speed you will need some!