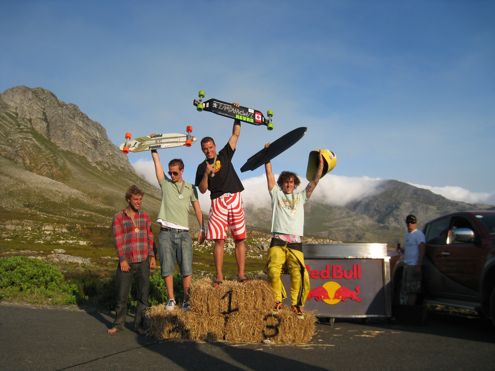 Mischo Erban stands on top of the Hot Heels Africa podium along with Zietsman and Bareaud.

Kogelburg, South Africa- Mischo Erban won the Hot Heels Africa IGSA World Cup finale today in Kogelburg in a tightly contested Downhill Skateboarding final. Mischo who hails from Vernon, British Columbia, Canada came from behind to overtake Mike Zietsman near the dam and led for the rest of the race. Olivier Bareaud overcame adversity to finish third. After nearly two years away due to injury, Aki von Glasow was back in top form to finish in fourth. 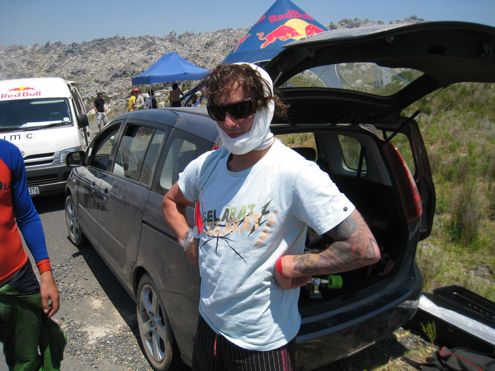 Olivier Bareaud prepares for a ride to the hospital. He would return to finish third. Photo Mischo Erban

As mentioned earlier, Olivier Bareaud had to overcome adversity to record his third place finish. During a morning warm up run he fell hard injuring his jaw and resulting in a trip to the hospital for stitches in his chin. Pete Connolly spent the entire weekend nursing injuries that he sustained in a crash on Friday. He went through to the second round, but was uncompetitive on his injured leg. 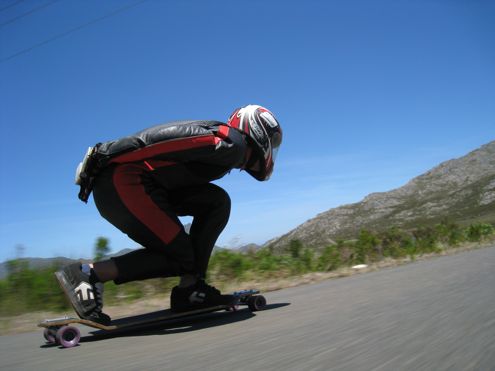 In the classic luge, Konstantin Weigl racing with an injured ankle pipped Russell Naude near the finish to take the win, with Beni Weber again in third. Abdil Mahdzan came from Malaysia to finish in fourth and Glen Phillips in fifth. Wiegl hurt his ankle in a first run, multiple board pile up. Leander Lacey damaged his board in the same incident and could not complete in the other two runs. 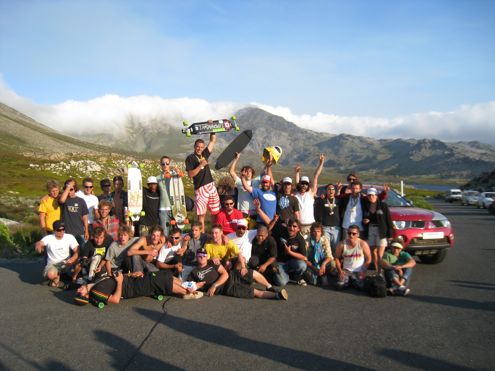 All the Hot Heels Africa competitors posing for a photo.

Smoke from a fire on the other side of the mountain caused some alarm to the organizers, however, the authorities were confident that there was no danger to anyone at Kogelberg and the race went ahead. The mountains were shrouded in smoke for most of the morning and it appeared that many spectators were deterred from attending the race. Conditions ranged from completely calm and very hot in the morning to a strong, cold and blustery South Easterly wind in the late afternoon for the Downhill Skateboard racing. 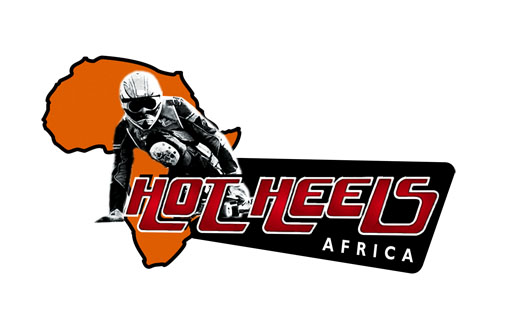