Due to popular demand, the marketplace forum has been replaced with a new marketplace that is not a forum but a purpose-built place for buying and selling.

The old marketplace forum is still there, and people can still respond to the old discussions there, but new ads should be placed on the new marketplace.

There's a "Marketplace" link in the horizontal menu at the top of the page, and a box in the right-most column showing the last 10 ads.

The new marketplace has a few bugs, but we hope to iron them out over the coming weeks. Let us know what you think.

Permalink Reply by Ben Shane on April 25, 2011 at 1:06
maybe the internets is using natural selection ;D

Its a good update.

Just dislike how we have to respond by email :/

as someone said earlier, use a g mail, i was using hotmail and they was fkn retarted, g mail works fine

heres a screenshot of the form, is there anything im doing wrong there? 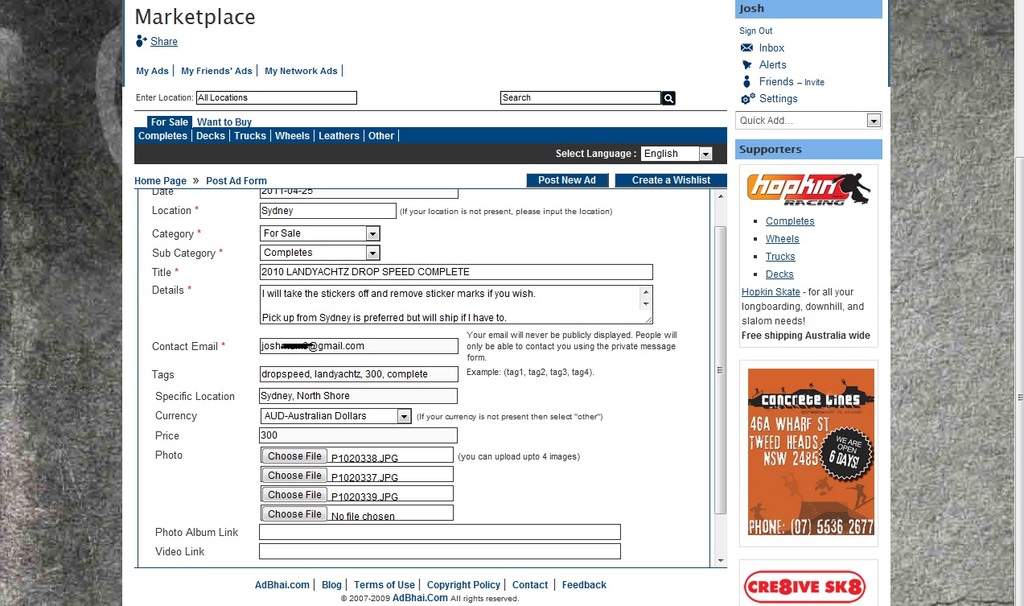 ASRA AdminPermalink Reply by Bugs on April 26, 2011 at 12:15
Josh, the form looks fine, but did you click the "Submit" button at the bottom of the it?

Re IE9: Is there anybody who can see the new marketplace using IE9?

yeah im pressing the submit button and a window pops up saying a confirmation email will be sent.

Josh, the form looks fine, but did you click the "Submit" button at the bottom of the it?

Re IE9: Is there anybody who can see the new marketplace using IE9?

Permalink Reply by Cents on April 26, 2011 at 18:58
Hrmmm disliking how the marketplace takes a lot longer to load than the old marketplace. Would rather it had been like the forums page but with links to sub sections. Though I guess its a lot cleaner overall good work.

I Havent had any problems with the new marketplace... I posted a muckaround ad just to see if it worked for me and it worked fine on Internet Explorer. I always look in forums for Marketplace though and it does take a little but longer to load. The only part i dont really like about it is how you have to email people about what they are selling or what they want... Because a lot of people i know have set up there asra account to there email account that they have there facebook and other things connected to so they have thousands of emails they never check... Although it has gotten me into checking my email all the time. I think it would be better if you could just email straight to they're Personal Messages in Asra which will send a email to there personal account as well.

Permalink Reply by Cents on April 26, 2011 at 22:20
Yeah I think sellers will be answering the same questions a lot more since there's no discussion.

Can somebody please explain the problem about not receiving the email?

Ive updated Javascript and all, tried Hotmail and Gmail and neither work..

The new marketplace is less "social" than the old one. That doesn't suit some people, but in my opinion it's already greatly improved the site. It's actually possible to talk about skateboarding again without your thread disappearing off the end of the Latest Activity in minutes due to a tsunami of WTS and WTB.

Cents, I don't think sellers will have to answer the same questions over again, and if they do it'll only be because they didn't include necessary information in their ad.

Connor, as for email being inconvenient because people's inboxes are swamped...stop subscribing to millions of emails from ASRA/Facebook etc., and if you want all those emails, use email filters to organise your inbox.

Jordan, so far a couple of people say they haven't been able to receive emails from the marketplace - I have no idea why at this stage.

i like it but is there a specific reason it opens in a new window when you open it? and yeah it is a bit slower and i think the no commenting thing will take a bit of time to adjust to, but overall it looks good Bugs!